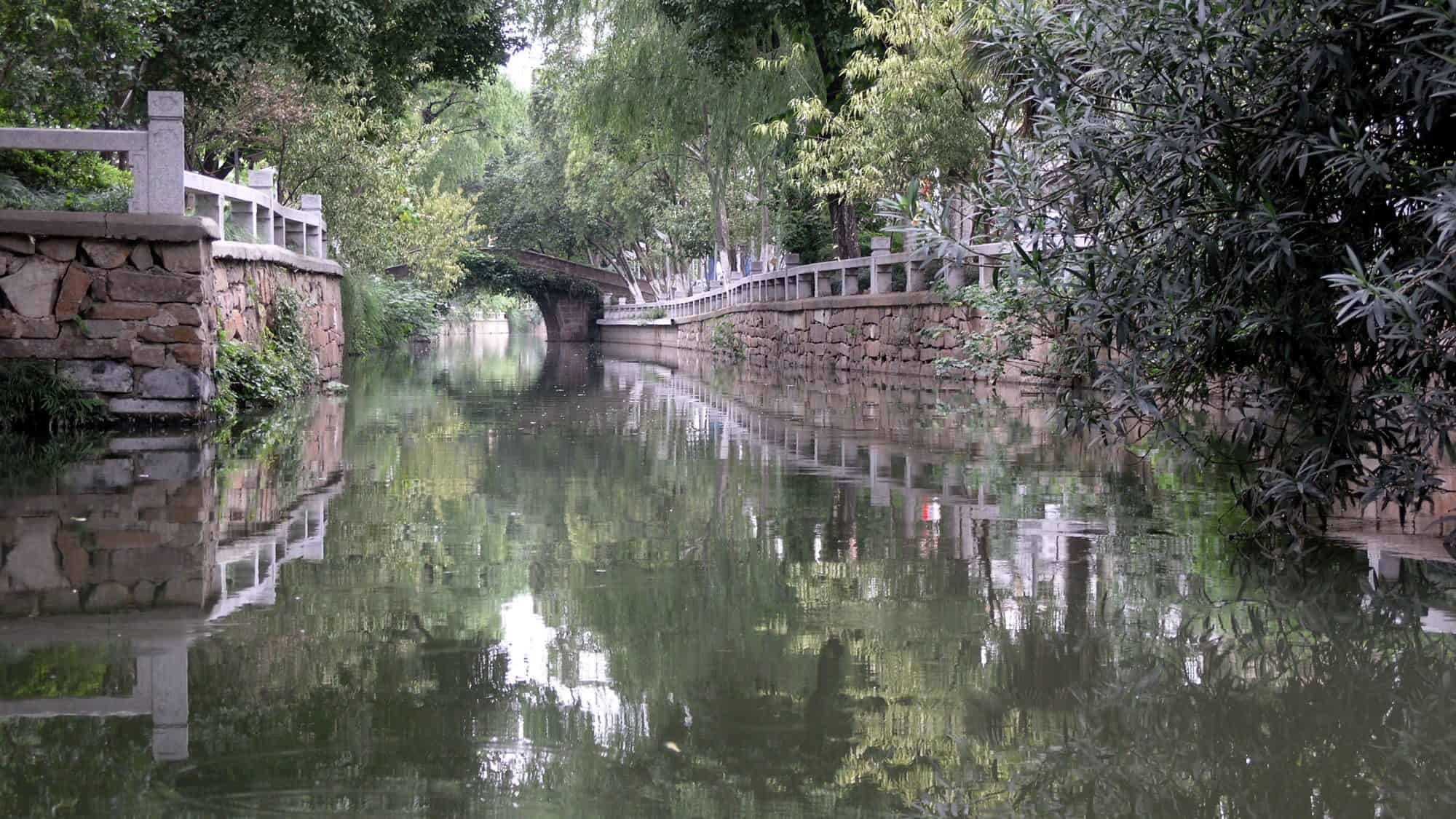 We woke early. Lene was feeling better, so we went down for breakfast, Yanmei and Daji deciding to eat the remaining yoghurt and bread from the evening before, and watch cartoons on TV. Before we left Suzhou I wanted to go and see China’s Grand Canal that runs from Beijing to Hangzhou and is the world’s oldest and longest canal, far surpassing the next two grand canals of the world: Suez and Panama. The building of the canal began in 486 B.C. during the Wu Dynasty. It was extended during the Qi Dynasty, and later by Emperor Yangdi of Sui Dynasty during six years of rapid construction from 605-610 AD. The canal is 1,795 Km (1,114 miles) long with 24 locks and some 60 bridges.

I’d read that it was possible to sail along the canal from Suzhou to Hangzhou – over night; but actual facts were hard to come by and Lene veto’ed the idea, not liking sailing at the best of times, but on a Chinese boat at night on a canal full of barges – no chance!

Lene stayed at the hotel and packed whilst the hotel arranged with a taxi to take the three of us to see the canal, wait for us and drive us back. We ended up in the middle of nowhere at an intersection of two parts of the canal. We agreed with the taxi driver to wait for 15-20 minutes and took the 5 minute walk along a path to see the barges sail past. I’d really wanted to see a long train of barges sail by, but it wasn’t to be. Thankfully the taxi driver was waiting when we returned and he drove us back to the hotel.

We checked out and left our luggage in the hotel. We were to take a train to Hangzhou later in the afternoon, and decided to see another garden – the , which was within walking distance of the hotel. Inhabited by, and named after, a government official who, tired of the bureaucracy, declared he would rather be a fisherman. It is the smallest of the Suzhou residential gardens. According to many it is the most impressive because of its use of space which creates the illusion of an area that is much greater than its actual size, and the mood of tranquility and harmony.

The garden is divided into three sections: a residential section, the central main garden and an inner garden. The main garden has a large pond that is surrounded by pathways and a variety of buildings, whilst the inner garden, small in size, was used as the model for the Ming Hall Garden at the Metropolitan Museum of Art in New York City.

We spent the morning walking the gardens, which even on a Saturday morning weren’t too packed. We spent some time watching the goldfish in the pond of the main garden, and drinking coffee in one of the pavilions. But, even more than in the previous gardens we visited, we missed some more colourful trees and plants – perhaps it was the time of year.

We left the garden just as two very large groups of Frenchmen entered, so the timing was perfect. We slowly walked towards the centre of town, eventually stopping at a restaurant where we could eat the Chinese hot pot that we’d seen at an earlier restaurant. We weren’t too ambitious and stuck to meat and vegetables instead of insects!

After lunch we started to make our way back to the hotel, but it wasn’t long before we left the main road and followed one of the smaller roads. We visited the Luohanyuan Shuangta And Zhengdian Relic Site, two identical pagodas built over 1000 years ago. The original temple that was built together with the twin pagoda’s was no longer there, only its ruins.

These Northern Song Dynasty pagodas were built in 982. They measure more than 30 meters tall, and have eight sides and seven stories apiece. The oversized iron steeples that cap each brick pagoda make up one quarter of their total heights—another rarity among pagoda designs. Although they are known as twins, the eastern tower is curiously about half a meter shorter than its western sibling.

We continued along the small streets with the many shops and houses – it seemed to be a fairly well off area. We reached a canal and decided to follow the canal, which we meant was roughly in the direction of the hotel. It was extremely peaceful here, lush vegetation, small bridges and the odd boat on the canal.

At the end of the canal we turned onto what we thought was the road our hotel was on. Lene was desperate for a toilet, but it turned out we were still a long way away from the hotel. We walked quicker and quicker and eventually made it to the hotel with seconds to spare – for Lene at least. Relieved, we packed our luggage into a taxi and left for the station.

The Suzhou to Hangzhou train actually went from Suzhou to Shanghai with a 45 minute break in Shanghai before leaving for Hangzhou. It turned out that the end station was Yiwu – the city of Daji’s SWI. We arrived in Hangzhou late evening and took a taxi to the hotel. We later found out that the driver had taken us a trip around town, but it still only cost 25 RMB.

We checked into the Lakeview hotel, left our luggage and went out for a walk around the hotel. The whole area had changed. The buildings that were in between the hotel and the lake – including the building where we met Daji for the first time – had been pulled down, as had some of the houses behind the hotel. The department store that had opened during our last visit in October 2002 as Hangzhou’s finest, was no longer a fine department store, but an outlet shop. We looked around, bought an ice cream and went back to the hotel.