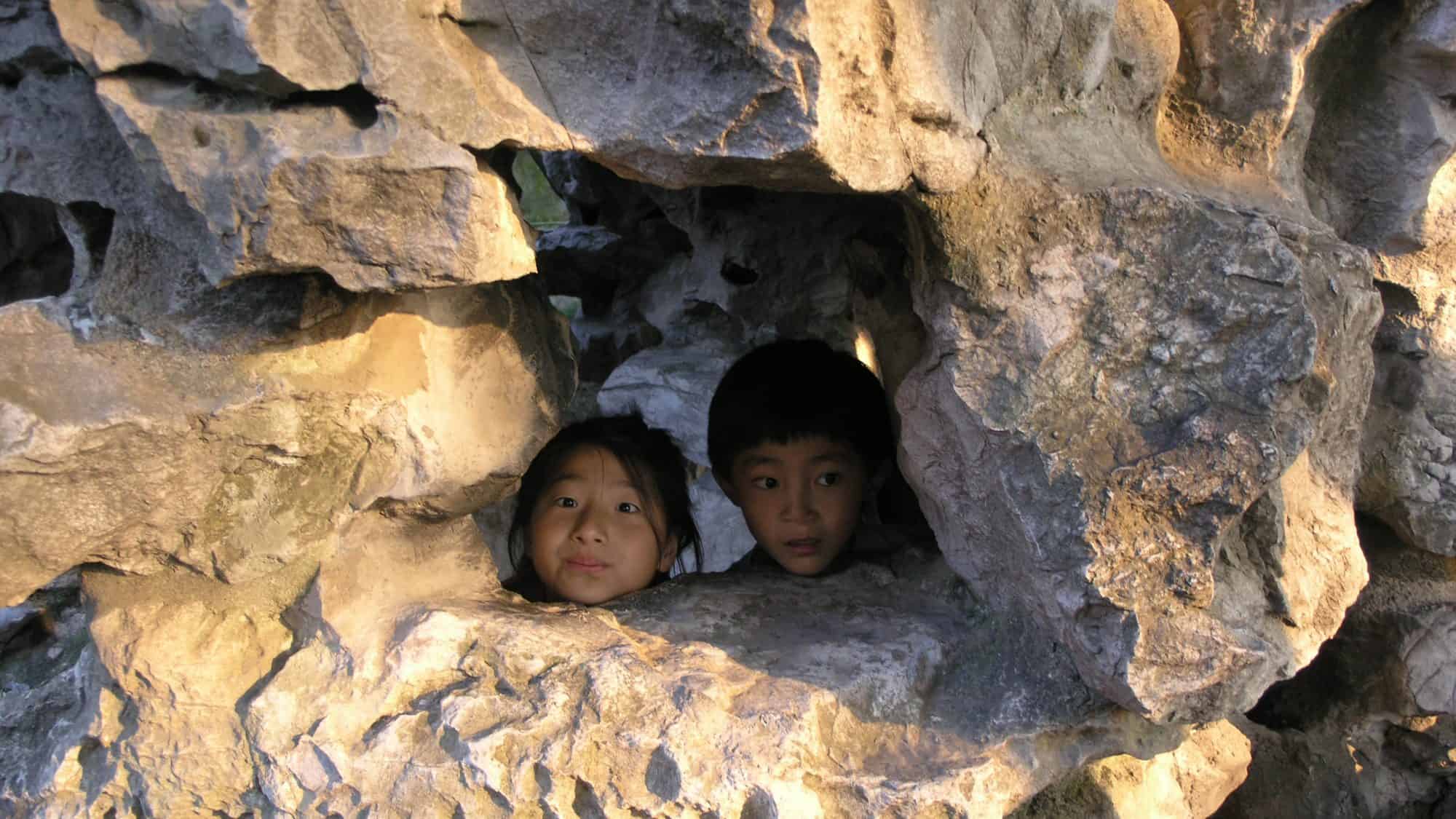 We took in the last views of Shanghai from our hotel room, breakfasted, checked out and left the hotel for the station. The hotel wasn’t in an area with lots of taxis, so it took some time to get hold of one, but soon we were on our way. We arrived at the station and stood in line at the ticket counter with a large “English spoken” sign. There were probably 20 lines and 20 people in each line. Now and then, someone tried to jump the queue, but a few sharp words – at least that’s how it sounded to us – and they sulked their way to the back of the line. We had no idea when the next train to Suzhou would leave, but the people at the ticket counter seemed pretty effective, at least until we were number three in line and suddenly they closed all the counters. The Chinese took it all fairly calmly; the foreigners in our queue just couldn’t understand it. A Chinese-American told us it was because the computer system was down, so there was nothing to do but wait patiently. After about 15 minutes, all the counters were opened again, and we got our tickets for the 12:27 train to Suzhou. Whilst we were in Shanghai, the Special Needs Olympics took place. We saw this banner, and similar banners, all over the place. 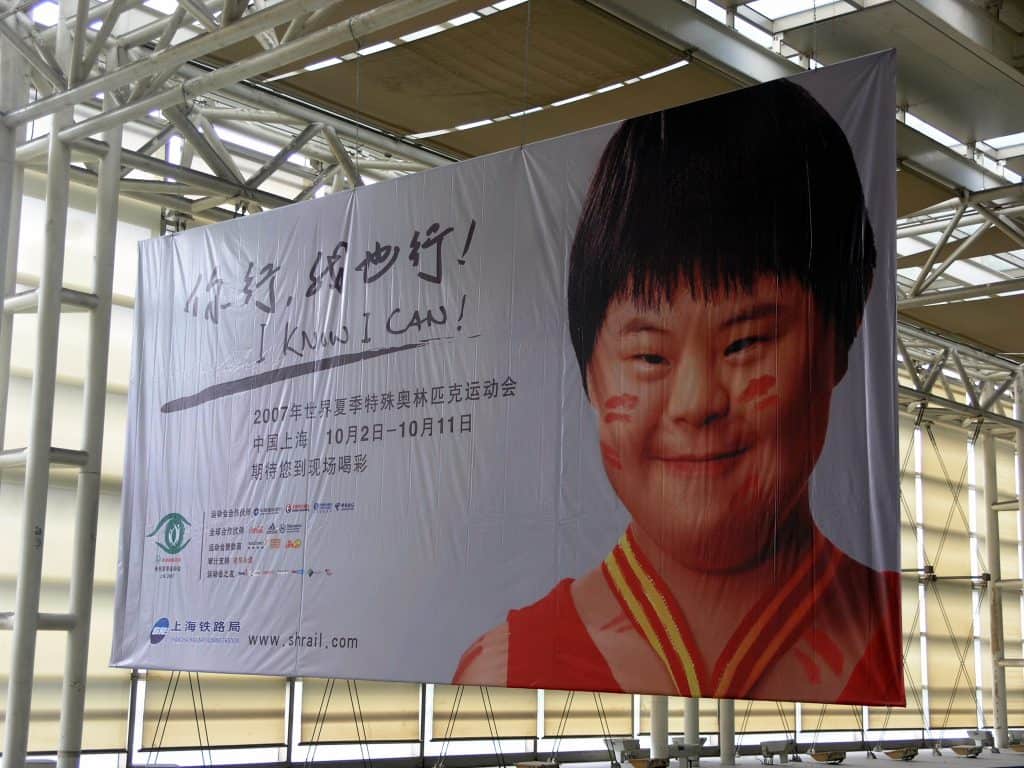 We had an hour to kill, but also our luggage, so we weren’t very mobile. We made straight for the waiting room and killed an hour, whilst we waited for the train – Lene and I reading, Yanmei and Daji playing their Gameboy’s. The journey took just over an hour and after leaving the Shanghai suburbs the train sped through the countryside, with the occasional towns and factories rolling by.

Suzhou is a small Chinese city with a population of ca. 6 million (similar to the whole population of Denmark). It lies on the lower reaches of the Yangtze River. The city is known as the Venice of the East, due to the many canals that run through the city, and is famous for its many gardens, pagoda’s and silk production. It also lies on the Grand Canal that runs from Beijing to Hangzhou, the longest ancient artificial canal or river in the world. Suzhou is the 5th most prosperous city in China.

A taxi took us from the station in the north of the city, to our hotel, the Bamboo Grove Hotel, which was situated in the south of the city. Only then did we realise how large the city actually is. Without really being stuck in traffic, it took us about 30 minutes to get from the station to the hotel. We checked in and unpacked our things and left in a taxi for the Humble Administrators Garden, the largest garden in Suzhou, and generally considered the finest garden in southern China. The garden contains numerous pavilions and bridges set among a maze of connected pools and islands. It consists of three major parts set about a large lake: the central part (Zhuozheng Yuan), the eastern part (once called Guitianyuanju, Dwelling Upon Return to the Countryside), and a western part (the Supplementary Garden).

When I was dragged along to visit gardens as a child, I remember seeing large green lawns and multi-coloured floral exhibits. Nothing could be further from a Chinese garden, which is generally green, but with lots of buildings, paths, lakes and bridges. Although undoubtedly beautiful, I at least, miss a bit of colour. These gardens are great to wander along the small paths, each path leading to something new and different. Daji and Yanmei, as all children, love the excitement of getting lost along different paths, without going too far astray.

The garden closed at 5pm, which was a pity as we could have spent more than 2 hours. After leaving the garden, we walked towards the centre of the city intending to find something to eat. We stopped at a couple of places, but they had no English menu, and we’d forgotten our book of pictures. Downtown Suzhou is full of shopping streets, many of which seemed more expensive than Denmark. A bit frustrated about not finding anywhere to eat, we almost ended up at a Pizza Hut, but decided to carry on looking. Eventually we found a restaurant that was packed with Chinese, but again they didn’t have an English menu. As we were about to leave, a young waitresses must have wanted to test her English and ushered us into the back corner – the only empty table in the restaurant. They found a couple of waitresses who spoke a little English and through pointing at other people’s meals, sign language and some English we managed to get a decent meal.

Whilst we waited for our food, we watched the other people, and realised that the top meal at the restaurant was a Chinese Hot Pot, where you order different meats, vegetables and noodles and you a given a bowl of boiling soup and you add the ingredients to the soup and then fish them up with the noodles once they are cooked. We’d never seen or tried this in China before and decided to try it one of the following evenings – until we realised that on some of the plates were insects, that were also thrown into the soup – it put us off the idea a bit.

The meal was fairly cheap and we left a tip for the waitresses that had gone out of their way to help us – much to their embarrassment (tipping isn’t at all normal in restaurants in China!). We walked about for an hour or so in the rough direction of our hotel, but tired, decided to take a taxi the rest of the way.