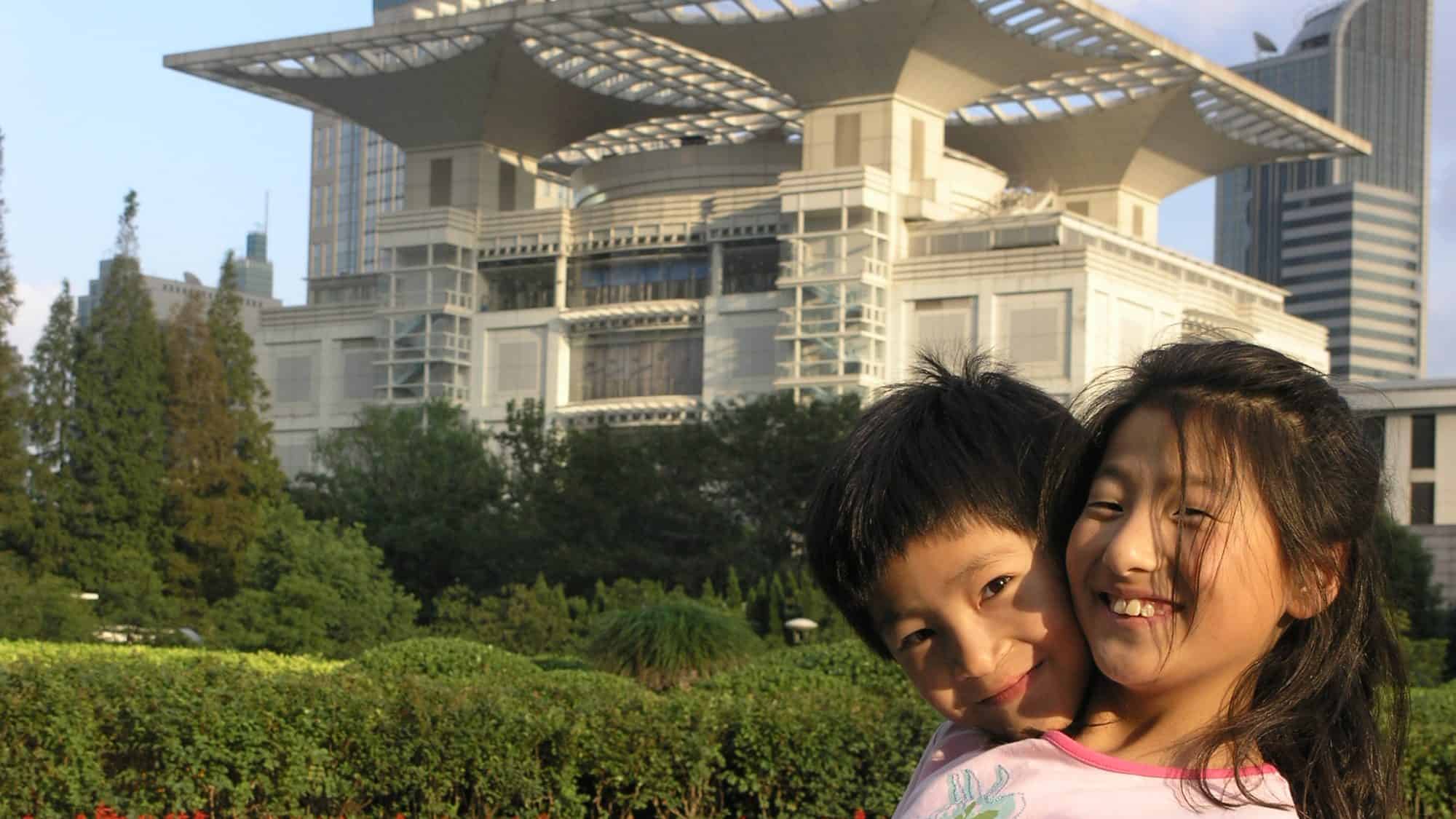 It was still raining when we woke up, but clouds looked lighter and there were breaks in the clouds – so it was looking promising. Steven was up first and went out for a walk around the neighbourhood whilst everybody else slept. At 7am in the morning all the shops are open and streets are packed.

After breakfast the rain had stopped and it looked like it could be a pleasant day. We took a taxi to the northern end of the Bund. The colonial period in Shanghai began in 1842 when the British and other Western nations established foreign enclaves, opening up the city to trade following the first Opium War. The Bund with its views over the Huangpu River became the chief shipping, trading and financial districts of the colonialists and it was during this period the most notable of the buildings that line the Bund were built. The Japanese occupation of Shanghai in 1943 put an end to the foreign concessions and during the communist era, the buildings fell into disrepair. However since the late 1990’s there has been a greater focus on restoring the Bund’s grandeur and refurbishing their colonial interiors.

We found the Bund to be overrated – the buildings are bombastic, and the whole experience is spoilt by the massive number of cars and buses that race along next to the pedestrian walkway. We went inside the Pujiang Hotel (Astor House Hotel), the first to use telephones and electric lights in China, and the Hong Kong and Shanghai Bank with its restored dome and lobby – evidently the most magnificent on the Bund – and stopped for refreshments at the Bund 12 cafe. Unfortunately the Peace Hotel with its art deco interior was closed. Most people seemed to be coming to the bund for the view of the skyline across the river in Pudong, not least the Oriental Pearl TV tower and the art deco Jinmao tower – China’s tallest building until the Shanghai Financial Centre – just next to it, is completed.

Southwest of the Bund lies the Old Chinese City (Nanshi), the first part of Shanghai to be settled. During the colonial years this was where the Chinese lived and the foreigners more or less never ventured. The Shanghai Lao Jie (Shanghai Old Street) is a 1km stretch renovated in 1999 as an Old Town theme street showing the different styles of Chinese architecture. The area contains various antique markets, novelty stores selling all kinds of Chinese specialities, the Bridge of nine turnings which is supposed to have scared away the daemons who are supposed to be afraid of corners, the small commodities street – where Yanmei bought a flute and Lene bought a couple of T-shirts that fit an adult, but when you take them off they shrink, so they barely fill more than a hand – ideal for travelling.

The Old Chinese City was packed, primarily with locals and Chinese tourists. It didn’t seem like many foreign tourists made it to this part of town. As soon as you went outside the renovated part of the city the streets and houses resembled most other Chinese big cities with narrow street and small homes – it seems that these areas of Shanghai are being pulled down quicker than you can read this.

It was about 2pm and we started to make our way back towards the hotel. One of the nice things about China is that shops selling certain things are grouped together. Walking back we passed one shop after the other selling musical instruments of all shapes and sizes – both those well known in the west, and those almost only known in the east – being so close to each other must either be good for competition, or price fixing. We stopped at a noodle restaurant and probably had the worst noodles we have experienced in China. When the bill came and they cost next to nothing, we wondered what we had eaten. We carried on along the musical instrument street, suddenly realising we’d walked past our hotel – without even knowing that we were anywhere near it!

We rested for a couple of hours and were out and about again. We walked through the People’s Park and west along Nanjing Road, the road we got soaked walking along the day before. The weather was great, but we soon got tired of the main road and took some of the back roads. We were very surprised how pleasant and quiet many of the streets were, with houses similar in style to European houses. Getting dark we started to make our way back to the hotel, but got a bit lost in the small streets. We found a supermarket and bought a bottle of wine and some fruit and crisps. We passed expensive restaurants and small holes in the wall, as well as a fruit and fish market, before finding a restaurant that was fairly full and without a long row of black limousines parked outside. We had a good meal, but would probably not be able to find it again. 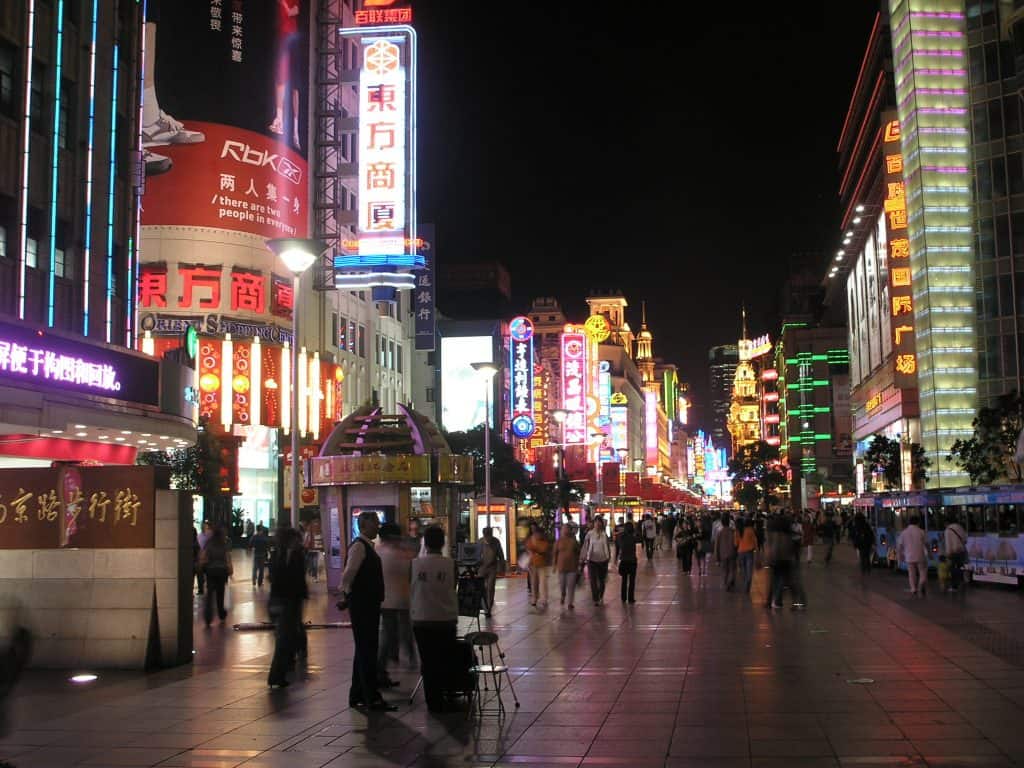 We made our way back to the hotel – via the pedestrian street and the cake shop, and managed a glass of wine before falling asleep.