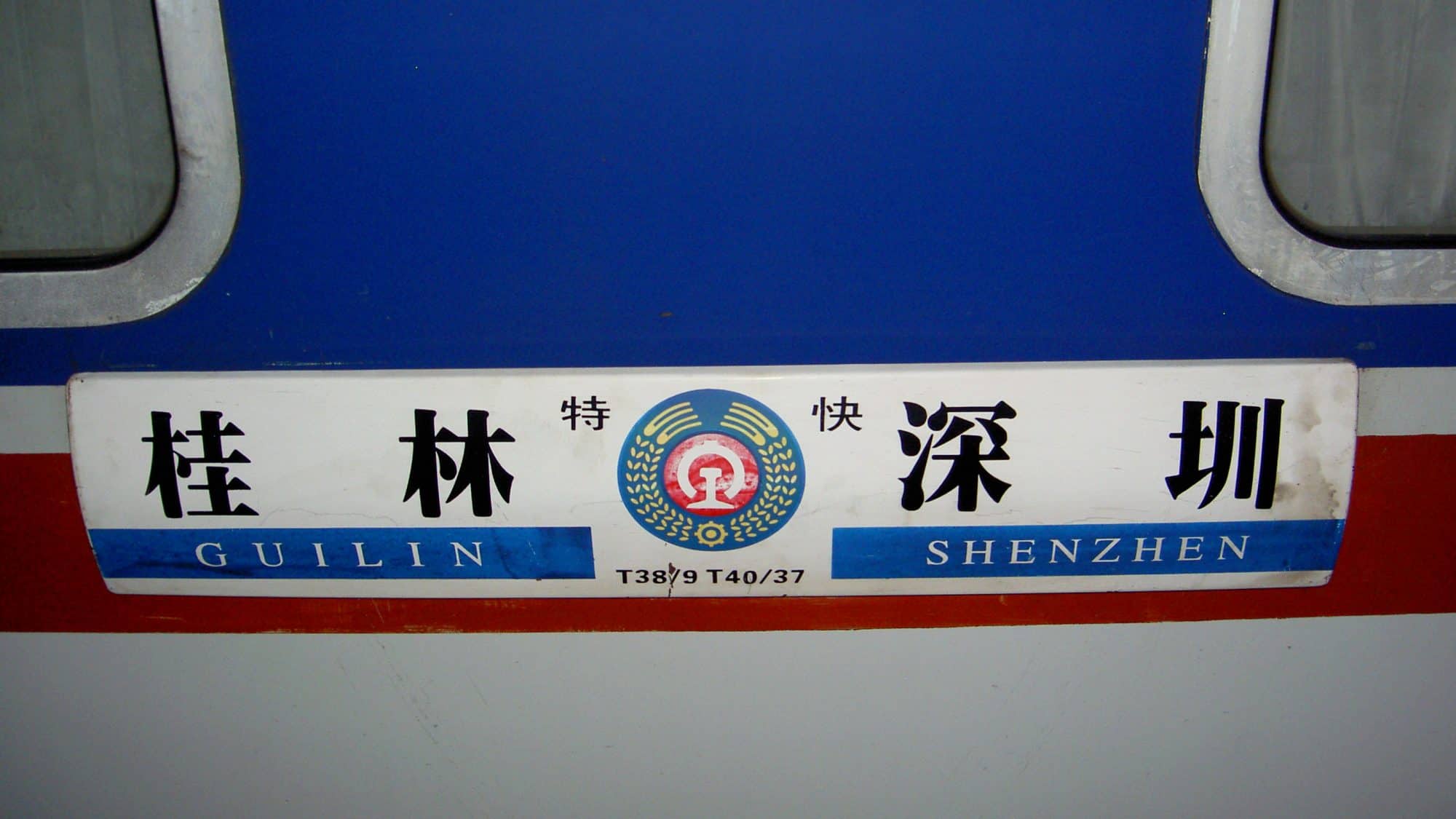 The taxi arrived to take us to the station in Guilin just after we finished breakfast. Of course the taxi was too small and only after some string was used to tie down the lid of the boot, were we able to take our entire luggage with us. The trip to Guilin was uneventful, me in the front with a nervous eye on the boot through the side mirror, Lene, Yanmei and Daji in the back.

We arrived in Gulin just before lunch time. The taxi dropped us at the station in front of the left luggage desk, where we dropped off our baggage, before walking into Guilin. We went north from the station, passing the long row of shoe-shiners, without really having any idea of where we were going. We wandered around for an hour in the heat, not really finding anything – neither shopping nor sights – before ending up close to the the station. We’d more or less gone round in a circle!

Eventually we found a map and found where the city centre was situated. We lunched next to a lake with two pagoda’s in the middle and walked along the canals until we came upon what must be the city centre with array of department stores and shops, McD’s and cafés. Yanmei and Daji had their picture taken in front of an electronic board counting down the time to the opening of the Beijing Olympics (291 days, 5 hours, 5 minutes and 3 seconds!). Clothes in Guilin were far cheaper than the other cities we’d visited and ended up with (more) shoes for Lene, a jacket, dresses, a Beijing Olympic baseball cap, Garfield bag and more before we’d finished.

We stopped for coffee and cakes at a large bakers/cafe, Yanmei and Daji watching the conditors decorate the cakes, before making our way back towards the station. We walked into a large park with lakes and bridges and took a leisurely stroll, enjoying the park and watching the Chinese enjoying the late afternoon.

We dined at a Chinese restaurant before walking back through the park, beautifully lit up in the dark. We walked back to the station, the streets packed with far more people than we’d experienced during the daytime.

At the station we picked up our bags and waited for the 21:48 train to Shenzen, on the border to Hong Kong. As always when we are in train waiting rooms, we received a lot of attention in the waiting room – two foreigners with Chinese children. We were installed in our 4 berth carriage by 21:30, the train pulling out of the station at 21:48 precisely. The TV didn’t work and it took us some time to find out how to turn off the music, before starting a good nights sleep.