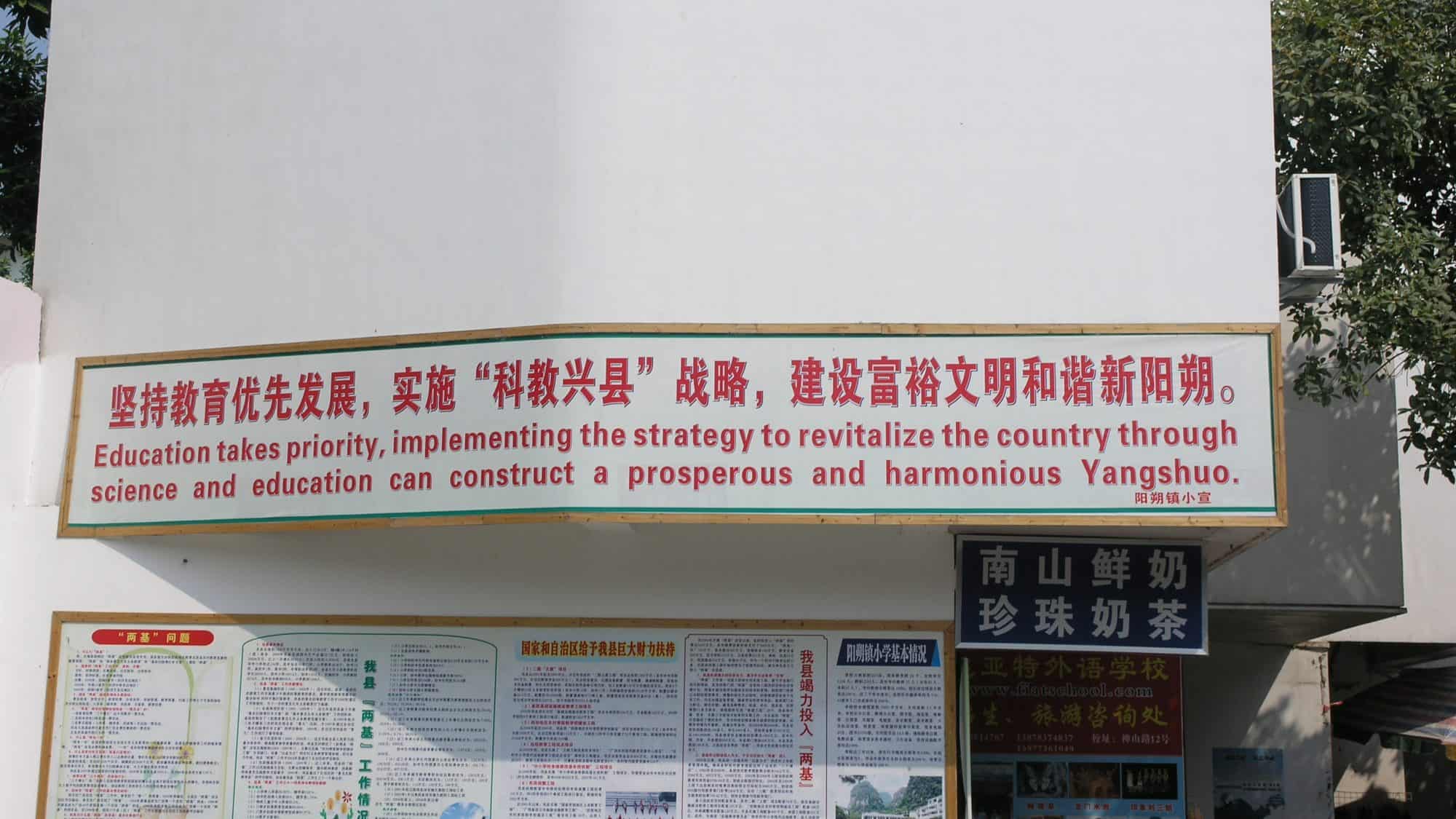 We slept well after the previous two day’s long bicycle trips, the heat and all the impressions we had gathered. We’d agreed to take the bicycles for another day, but promised Yanmei and Daji that we wouldn’t cycle too far away. We hadn’t really seen Yangshou yet, so we wouldn’t go further afield.

After a long breakfast we walked down the hill to pick up the bikes and cycled in the opposite direction from the previous days. We soon ended in a small village with nowhere else to cycle – the whole area was surrounded by karst peaks, and seemingly no easy way around them. It was Sunday morning, perhaps the Chinese were taking a hard-earned break, as there were very few people were out and about and it was amazingly quiet – just the sound of a farmer shouting at his water buffalo as he ploughed his plot of earth.

We saw some large citrus fruits hanging from trees – often with the branches propped up as the fruits were so heavy. Later during the day bought one from a local fruit shop, and eat it when we later arrived at the hotel. We later found out the fruits name is Pomelo or Chinese Grapefruit and has a similar consistence and taste just like a grapefruit – perhaps a little less sharp.

We cycled back to Yangshou and took a look around. The town itself is not very inspiring, a tourist town with a big T. A hundred or so boats take the daily trip from Guilin to Yangshou, and when the passengers disembark, they are met by a market, at least 1km long along the Li River, selling clothes, CD’s/DVD’s, bags, souvenirs, pictures and woodwork and much more. The traders assemble and disassemble their goods every day, 365 days a year. Then there is West Street, a pedestrian street lined with restaurants, bars, shops, hostels, hotels and souvenir and clothes shops. As the boats arrive, the Chinese pass along the market and West Street to get to their busses for the trip back to Guilin – at that time West Street is not a pretty sight (well it isn’t very pretty anyway :-).

We bought some crocs (shoes) for the children, a skirt for Yanmei and Lene bought some trousers. We took an ice cream, a break at a cafe and just relaxed. We visited the local park, which wasn’t very interesting. It was hot!

We watched the boats returning to Guilin, and again enjoyed dinner at the hotel, enjoying the wonderful evening weather to sit out well past 10pm. Unfortunately it was our last day in Yangshou!