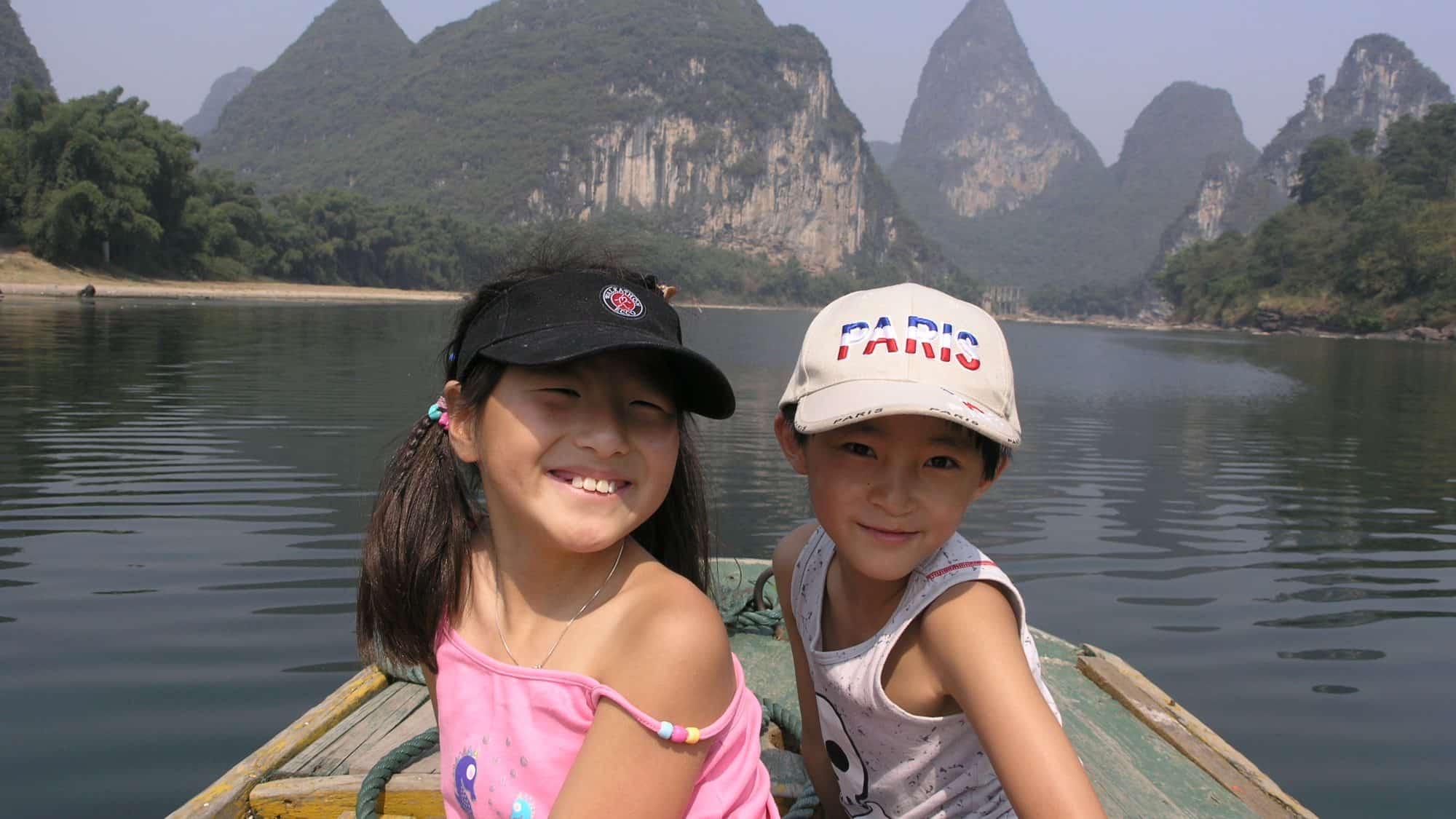 We were tired after all the impressions and experiences of the previous day. Jessie had proposed that she would pick us up at 7:30 to be ready for the boat at 8:00. We weren’t sure we would be able to make it up so early, so eventually she agreed we could take the boat at 13:30 which allowed us to have a relaxing breakfast and the kids to take it easy. Steven, never wanting to waste an opportunity to see something new, went for a walk along the path that passed by the hotel.

At around 13:00 we walked down the hill from the hotel to pick up our bicycles. The bicycle rental shop was a house that doubled as a bicycle rental shop – the bicycles stacked up next to the TV and sofa! The wife of the owner was looking after her grandchild, who got a lot of attention from Yanmei and Lene.

Jessie was late and when she arrived we were running out of time. We cycled to the docks and found out that it was a private boat, so there wasn’t a scheduled time to leave. We lifted the bikes onboard and sailed downstream along the Li River to Liugong, a small village, passing the stadium where the Liu Sanjie Light and Sound show was held.

We sat on the deck whilst we experienced life along the river: fishermen, fish farms, water buffalo, men collecting seaweed on bamboo rafts, people swimming in the river and a seemingly unlimited number of karst peaks, before being dropped off in Liujong. We bought a couple of cokes from some men who helped us lift the bikes up the hill to the town and started cycling through the countryside. Just like the day before, we passed through many small villages and being Saturday many children were out playing – and practicing their English as we cycled by. We passed by herb, peanut and rice fields, small lakes and the one karst peak after the next. Again we were amazed at the beauty and tranquility of the countryside.

It was hotter today, or at least that’s how it felt, and the bicycle trip was longer, but Yanmei and Daji had no problems keeping up – Daji would have probably set the pace if we’d let him. Even though they had to push their bicycles every now and then where the dirt tracks got too sandy, they never complained.

As we turned a corner we were suddenly confronted with a row of 20 or so golf-buggy’s full of tourists who’d just got off one of the boats from Guilin, and being guided through the countryside in relative comfort, whilst we were sweaty and tired on our bikes – but I wouldn’t have swapped for anything. Each time the golf-buggy’s stopped, there was a row of Chinese farmers carrying water buckets or with babies on their backs, ready to pose for photographs for a small sum of money; or selling crowns of flowers, or other local goods – commercialism has also reached the Chinese countryside.

We broke for refreshments at a small cafe before continuing the trip to Yangshou along the small dirt tracks, through small villages. We noticed that they were building everywhere, a sign that the improved economy was also reaching the Chinese countryside.

We arrived home at around 17:00, tired, thirsty and dirty after another fantastic trip through the Chinese countryside. We thanked Jessie for her great work, she was a wealth of information and had her own interesting background – but that’s up to her to tell you. You can read more about the trips Jessie offers here.

We delivered the bikes back and reserved them again for the next day, and after dropping off our stuff, we went directly to the upstairs bar at the hotel and ordered drinks – watching the empty boats go back to Guilin and the sun go down. We washed ourselves and eat dinner at the hotel – the food was very good at reasonable prices – not least the lemon chicken!