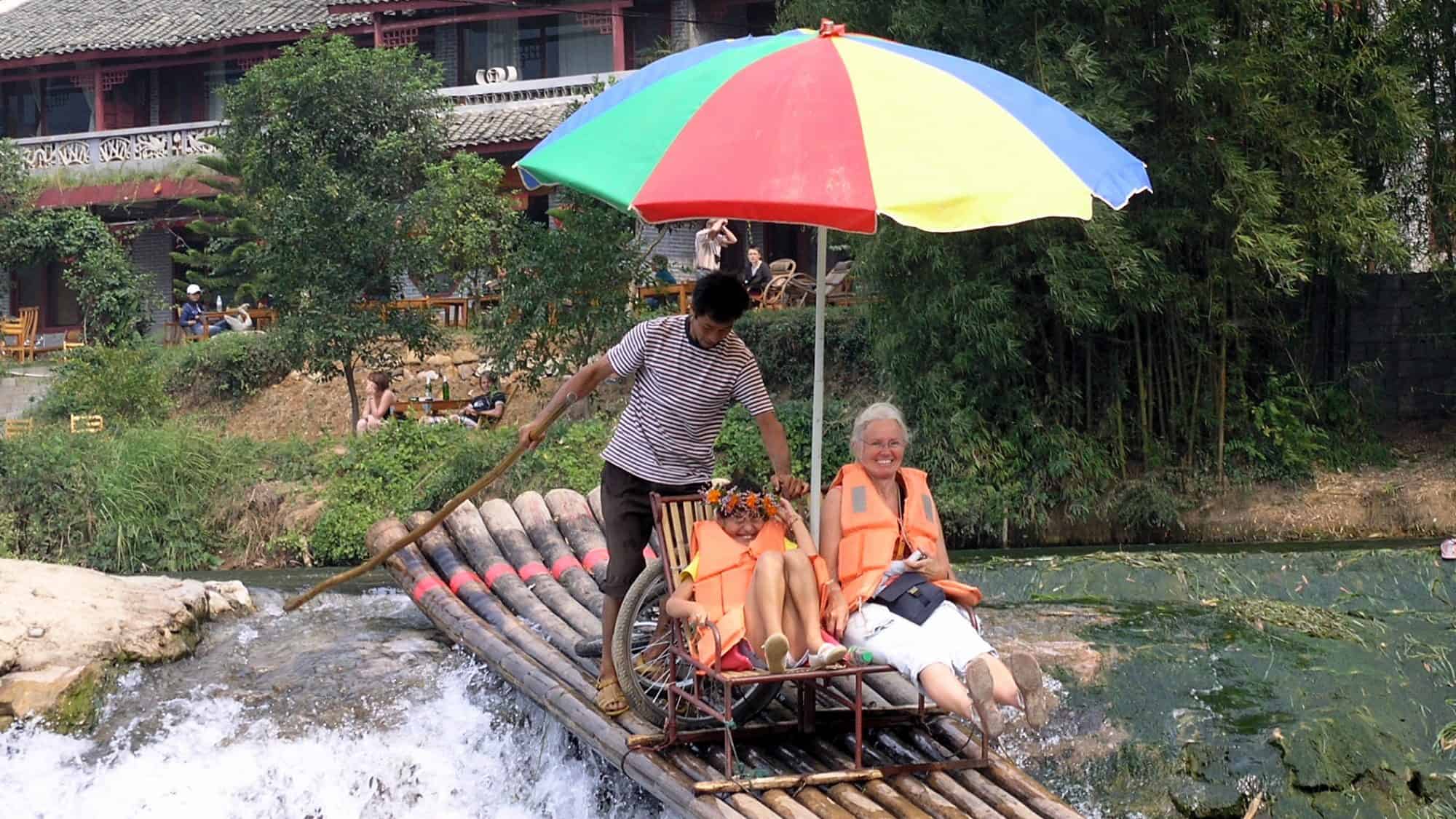 Yangshuo (阳朔) is a very scenic, small tourist town surrounded by amazing karst mountains and beautiful scenery – not least the rice fields. Situated 50km south of Guilin, with the Li River on one side and several karst peaks on the other three sides, Yangshou has become a tourist magnet and many travellers use Yangshuo as a base and spend their time exploring the karst scenery and rivers, or checking out caves and local temples, and not least mountain climbing.

Karst is a distinctive topography in which the landscape is largely shaped by the dissolving action of water on carbonate bedrock (usually limestone, dolomite, or marble). This geological process, that occurs over many thousands of years, results in unusual surface and subsurface features ranging from sinkholes, vertical shafts, disappearing streams, and springs, to complex underground drainage systems and caves. Around Yangshou, the karsts have the form of “pimples” in the landscape as can be seen from the pictures.

Like the rest of China Yangshou has quickly adapted to the new economy, catering for the tourists, not least the many boats that sail from Guilin every day.

We enjoyed breakfast; it was already warm and sat outside. Jessie, our guide arrived and we walked down the hill to pick up our bicycles. We were worried about Yanmei’s and Daji’s due to the high-handle bars and low seats, but they managed the trips without any problems. We cycled through Yangshou and out into the countryside to see a very different side of China. Along dirt tracks we cycled past rice and peanuts fields, small villages, water buffalo and families working the fields – everything seemed to be slower; more leisurely.

Everything was green and tranquil, and with the backdrop of the karsts, the scenery was truly amazing. At one point we were stopped by the police, they wanted to check Jessie’s credentials – like most other things you have to be an official tourist guide to show tourists around. Jessie passed through fairly quickly; a couple of other guides took far longer.

We were cycling along the Yulong River and after about one hour we reached the next part of our trip – bamboo rafting. Two and two plus bikes we were punted along the river on rafts made from bamboo. It was extremely leisurely, as we relaxed, floating along with the current viewing the spectacular scenery. At least until we noticed some rapids ahead. We were told to lift our feet whilst we plunged over the 50 – 100 cm drop – which was repeated four or five times through the hour long trip. At three points during the trip our pictures were taken and the rafts pulled over so we could see and purchase the pictures.

The trip was very enjoyable and not least Yanmei and Daji loved plunging over the rapids, and on top of that, the scenery is truly fantastic. Unlike the waiter in Hangzhou, the two guys sailing our rafts happily accepted a tip and I’m sure they get a cut from the pictures as well.

We got off the rafts at Gong Nong Bridge and were again up on our bikes heading along a fairly busy road towards Moon Hill, one of Yangshou districts most notable sights – a karst peak with a hole in the middle. It’s a fairly long walk to the top – 840 steps. At the bottom, a group of elderly ladies with ice boxes containing water and coke attached themselves to us and followed us all the way to the top and back again, hoping we will buy something.

We reached the bottom of the hole and took in the fantastic view – spoilt by the smog – of rows and rows of karst peaks and watched a mountain climber slowly make his way up to the top of the hole. Yanmei, Daji and Steven took the easier root to the absolute top, along a very rough dirt path. The view was even more spectacular, as you could see in all directions from the top.

We made our way down the 840 steps and eat at the Moon Hill cafe, at the bottom of the hill – the food was westernised, but OK. We continued our bike ride along small dirt tracks through villages and magnificent views around every corner, and Steven lagging behind, always stopping up to take yet another picture!

We arrived back at the hotel around 4pm, relaxed and had a light snack as were were going to the Liu Sanjie Light and Sound show later in the evening. The plan was that we’d be picked up at 18:30, but the taxi didn’t turn up until 20 minutes later so it was a mad rush through the town to the theatre. The square in front of the theatre was packed and there was a lot of confusion about the tickets – but we finally got ours – thanks to the help of a young Chinese couple who made sure that we got our tickets.

Liu Sanjie Light and Sound show is an outside performance against the bachdrop of the karsts along the Li River. The show is directed by Zhang Yoimon, famous for well known movies Hero and House of Flying Daggers (both nominated for Oscars) and selected to direct the opening and closing ceremonies at the 2008 Beijing Olympics. The show has a cast of almost 500 people; amateurs from Yangshou and the surrounding villages. The show’s main aim is to show how the local minorities in the region live off the land and rivers.

Liu Sanjie (which means third sister) is a local woman who sings so beautifully that her voice can even raise the dead. A local gangster, Mo Huairen falls in love with Liu Sanjie and wished to make her his concubine and kidnap and hold her captive. The boyfriend and his friends in the village free her, and the couple escape turning themselves into a pair of larks.

The show is magnificent and the use of lights and water emphasizes the beauty of the Li River and the limestone mountains in an amazingly unique way. Although expensive for the Chinese (tickets cost 180RMB and up) every show is sold out (2.500 seats per showing, sometimes twice a night), many of the tourists coming in on the boats from Guilin see the show before returning. The show is spectacular and something any visitor to Yangshou really must see. Similar shows are, according to Jessie starting, in Hangzhou and Lijiang, Yunnan.