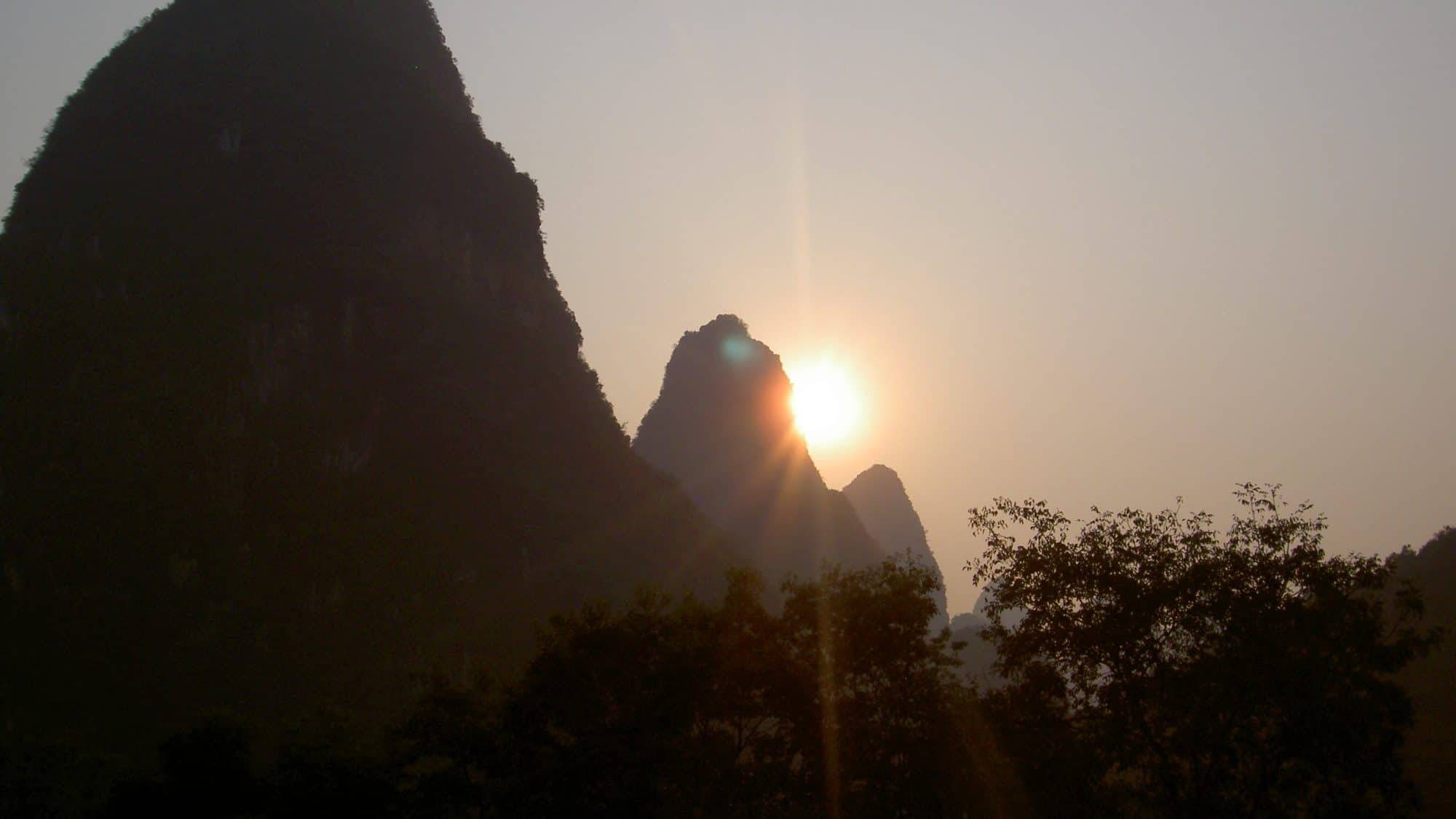 We slept late and packed before taking the last breakfast at Lake View hotel in Hangzhou. Throughout the 4 days in Hangzhou, we’d met other Danish families with adopted children, just like us bringing their adopted children back “home” to visit their children’s welfare institutes – it’s a small world. After packing, we checked out, and crammed ourselves into a taxi. We’d bought shoes and clothes in Hangzhou, so it was getting harder to fit everything into our suitcases and even harder to get everything into the taxi.

The taxi took us to the airport through some of the new high-tech industrial areas that together with tourism has turned Hangzhou into the eighth richest city in China. Check-in went smoothly and having plenty of time we wandered around the airport and saw the little there was to see. The 13:10 flight was delayed by about 30 minutes – it came from Shanghai and flew on to Guilin.

The flight was uneventful and we landed in Guilin after one and a half hours, in yet another brand new airport, packed with tourists. Our luggage arrived and outside a taxi driver was waiting for us. It was noticeably warmer in Guilin than in Hangzhou and we just about managed to cram our baggage and ourselves into an even smaller taxi than the one that had taken us to the airport. Guilin airport is in the countryside and the airports infra-structure certainly doesn’t match the rest of the airport; taking a dirt track to leave the airport – although we wondered whether this was just a way of not passing along an airport toll road – if such exists at Guilin airport.

The trip to Yangshou took almost 2 hours through rural china. We passed rice fields, fruit plantations, mule pulled ploughs, three wheeled vans carrying produce, children playing and adults working along the roadside and small villages. As we finally reached the main Yangshou-Guilin road, 50 or so coaches passed us in the opposite direction bringing tourists back after sailing from Gulin to Yangshou along the Li River.

It’s no wonder China has a terrible death rate on the roads, sitting in a taxi on a longer trip is really putting your life in somebody else’s hands. Everybody drives in the middle of the road, and whilst there is lots of room to overtake on the inside, they still overtake on the outside, often pushing the opposite traffic into the inside lane. I have been told that they drive in the middle of the road due to people walking, working and playing on the edge of the road.

We finally arrived in Yangshou, tired after the long bumpy ride. We drove through the town, which seemed far larger than we’d assumed and headed out to the Li River Retreat, along the Li River a couple of kilometres outside town. We checked in and settled into our large, but fairly simple room before meeting the hotel owner Alf, an Spanish-Australian who’d settled down in Yangshou, who told us about the activities the next couple of days. 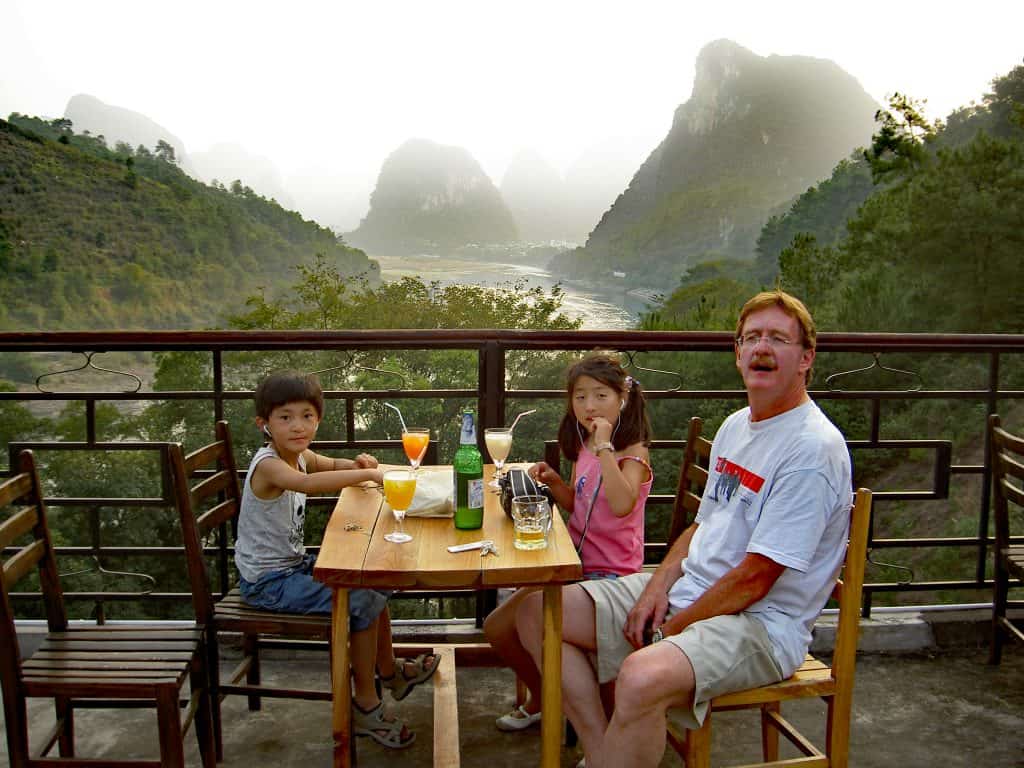 As we watched the sunset from the rooftop bar, we knew these were going to be a very special few days. We ate dinner at the hotel, and were really surprised how excellent the food was, enjoying being able to sit outside until late in the evening in October. It was so amazingly quiet. 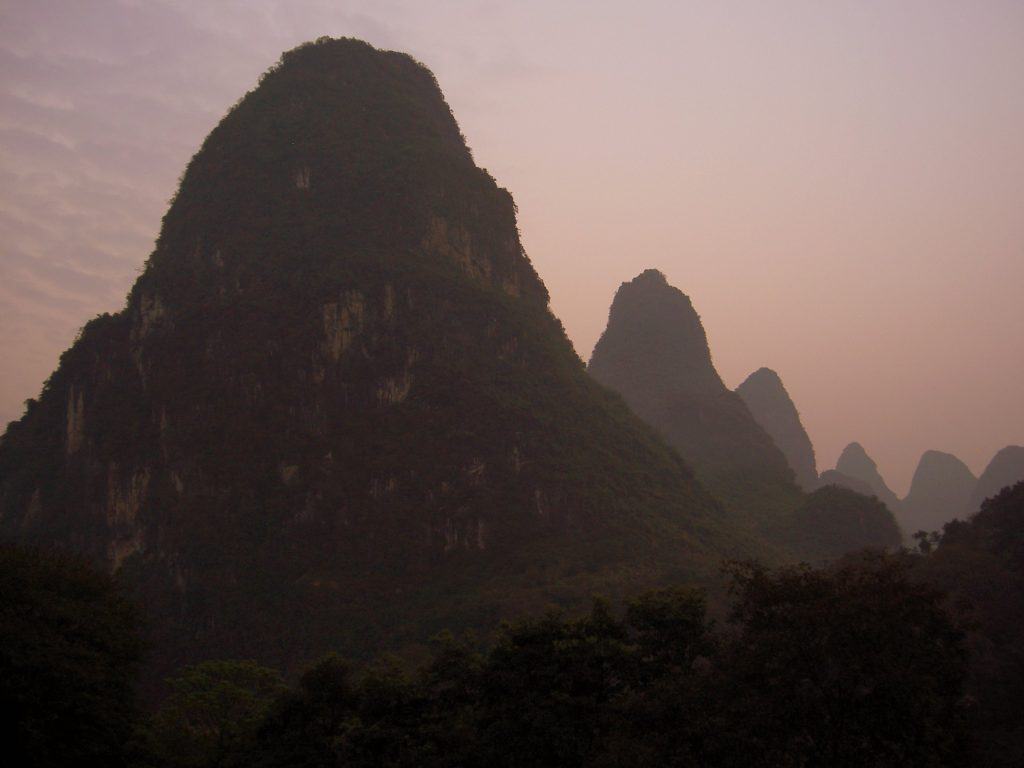