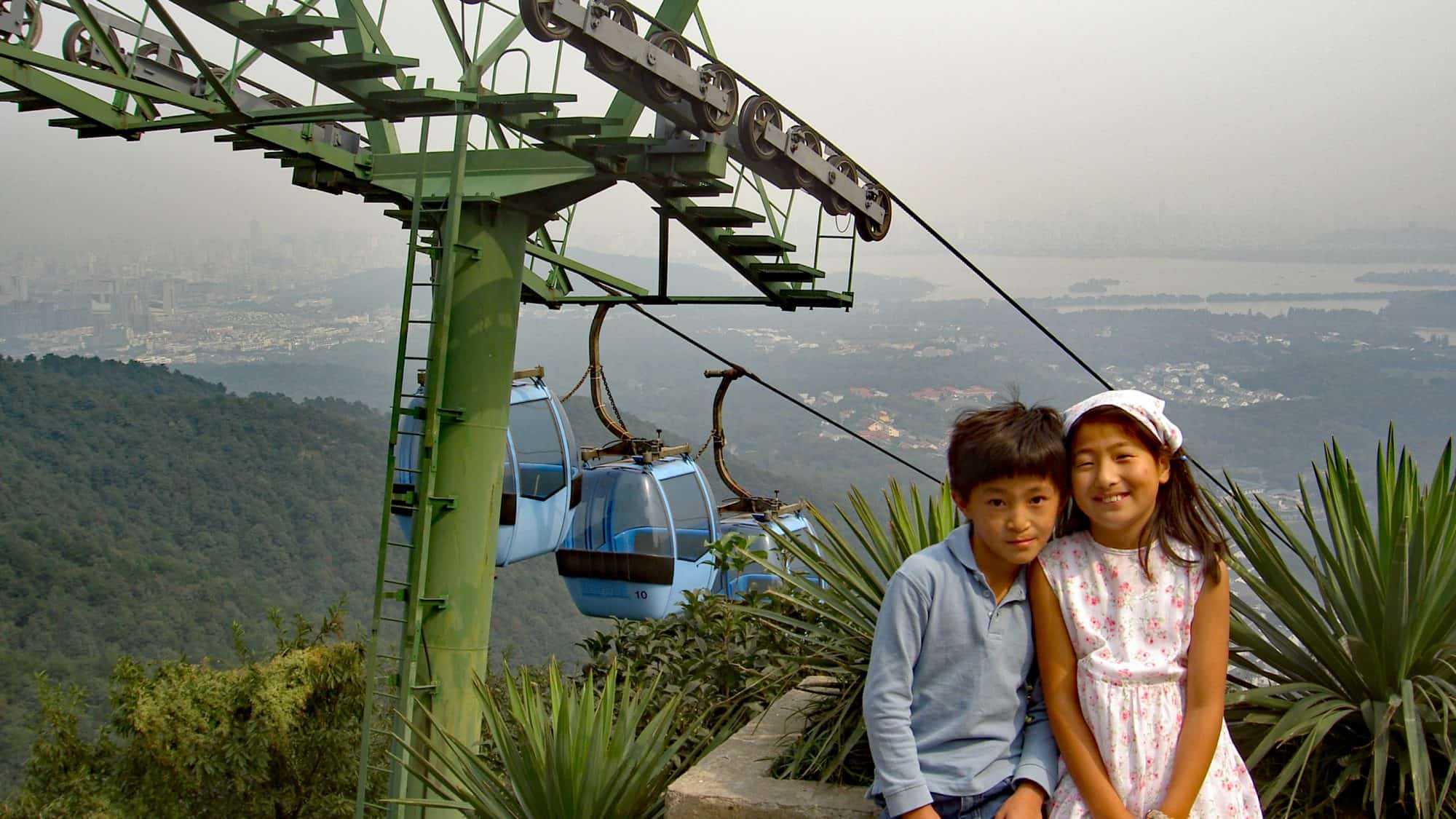 We woke to yet another sunny (but hazy) day, eat breakfast, still a bit stiff after the previous days walk around the West Lake. Lene and the children were, perhaps, hoping for quiet day in the hotel, but it wasn’t to be. Today Steven had planned that we would visit Lingyin Temple (the Temple of Soul’s Retreat) – the largest and finest temple in and around Hangzhou. The temple was first built in 326 AD by an Indian Monk Huili. It prospered and flourished and at its peak there were 9 buildings, 18 towers, and 72 halls with 1,300 rooms and more than 3,000 monks. Through history, the temple has been ruined and undergone several renovations, but has recently been rebuilt in its original style.

We took a 15 minute taxi ride from the hotel, along the lake towards the edge of the city. Once we arrived, we followed the crowds; the place was packed with Chinese tourists and very few western tourist. The Temple is surrounded by hills on three sides and at the top of one of the hills is a smaller temple with a fantastic view over Hangzhou and the West Lake. There were so many people that we decided to walk up to the smaller Lingshun Temple at the top of the North Peak instead of visiting the Lingyin Temple. On the way up, we walked past Fei Lai Feng, a 167 meter high limestone peak with its many grotesque engravings in the shapes of a dragon, tiger, elephant and ape as well as ca. 300 Buddha images, the largest of which is Maitrey, the Buddha of Joy with cloth bag on shoulder.

It’s quite a trek up the North Peak; pleasant, but hard to walk up all the steps – there were no tourists at all. Halfway up, an old temple was being restored and a new being built – all the building materials were carried up by mules as there were no roads or other means of transport.

We eventually made it to the top, a bit exhausted, only to find that almost everybody else had taken a cable car up! Lingshun Temple, is a 1,600-year-old temple, known as God of Wealth Temple to the locals. Thousands of pilgrims make their way up here each year to light incense (there was a lot of smoke) and say prayers hoping it will bring them wealth and fortune.

We rested, eat an ice cream and enjoyed the view of Hangzhou and the West Lake and the temple below. Like most Chinese cities a cloud of smog hung over the city, blurring what must be a truly fantastic view on a clear day (if there are any?). We visited the temple, a small but pleasant temple with a large Buddha and watchers, and behind the Buddha a wall of what must be 100+ figures most of them praying – the picture below shows just a small part. 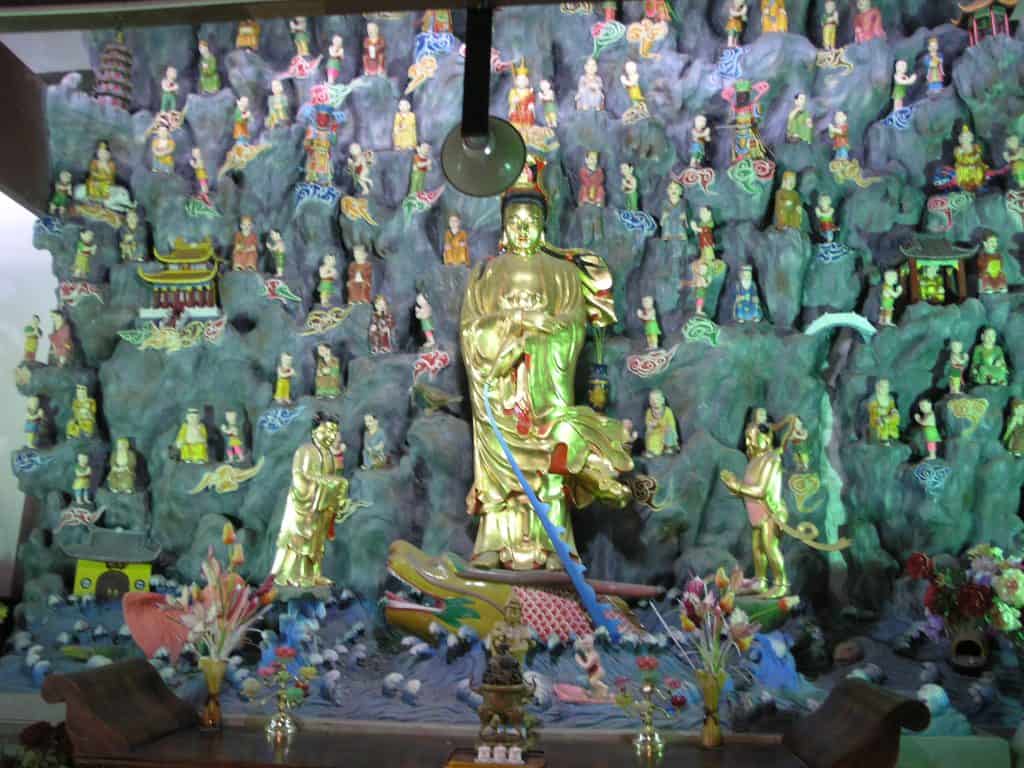 We took the cable car down to a village close to the Lingyin Temple watching the monks and villagers looking after the tea fields. We walked back to the entrance of the Temple, where the crowds had thinned out. Lene and the children decided they’d seen enough of Temple’s and sat outside in the sun, whilst Steven when back inside to see the Temple. The crowds seen to have left for lunch, so whilst busy, there was room to look around.

In the actual temple there were two main halls. In the Hall of the Heavenly King, is the statue of Maitreya, the fat-bare-bellied Buddha with a smiling face, whilst in the hall of the Great Hero, the main hall in the temple, is the magnificent statue of Sakyamuni, founder of Buddhism, a 19-meter-tall statue is seated on a 10.5-meter-high lotus flower amidst great red pillars and murals. The largest seated Buddha in China – 19m tall sitting on a lotus flower. Behind Sakyamuni is a colorful sculpture of 150 Buddha’s.

Some of the monks from the temple were congregated in one of the halls in prayer. As they finished they left the hall in a long single-lined procession to go back to their quarters. The Lingyin Temple is certainly impressive, with the statue of Sakyamuni the dominating feature. I left the temple and went back to Lene and the children who’d spent the 45 minutes enjoying the sun and watching the crowds.

We took the taxi back to Hangzhou and took a final walk along the lake. In the evening we had dinner at the same restaurant we’d eaten on Sunday. The waiter spoke some English and wanted to try it out on us – so he was extremely helpful. We left him a tip as we left, but as had happened the year before in Lanzhou, the waiter came running after us and physically insisted on giving us the money back – even though the tip was peanuts.

We enjoyed the summer air as we walked home from the restaurant, first to the supermarket to buy a cake (although Chinese cakes aren’t very exciting) and then back to the hotel to pack before leaving for Gulin, the following morning.