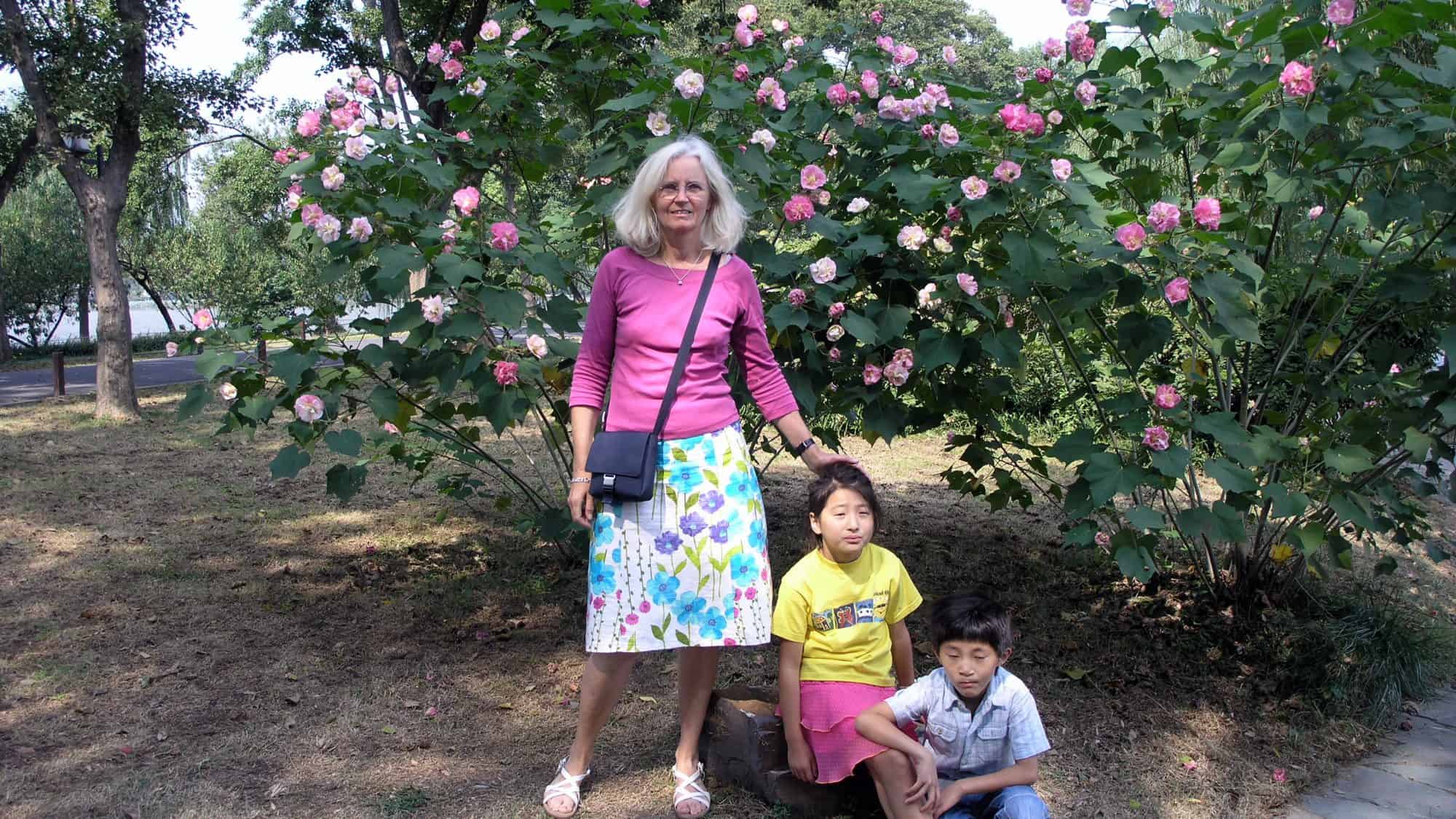 During our previous visit to Hangzhou we had wanted to walk around the West Lake, but the weather was against us and we never made it. So with a sunny day ahead, today was the day we’d finally make 15km trip around the lake. We left the hotel fairly early with fresh legs and bottles of water.

“Of the thirty-six West Lakes east or west, the West Lake in Hangzhou is the best.” As this dictum reveals, China has thirty-six West Lakes – in Beijing, Fuzhou, Guilin, etc. – but none are reputed to be as magnificent as the one in Hangzhou. Originally no more than a shallow inlet, this section of the Qiantong River was dredged and dammed in the eighth century to form the lake that exists today. It was also at this time that the lake’s design was enriched with the picturesque north-south Su causeway and the east-west Bai Di causeway.

West Lake is a very shallow, man-made lake, with an average depth of less than 2 meters. It was a historically important source of water for the local farmers, but the dyke collapsed the West Lake nearly dried out. Due to the foresight of Hangzhou’s governor (and resident poet) Bai Juyi, a new dam was constructed (785-804 AD), and West Lake returned to its glory. Another of Bai’s accomplishments was to construct a causeway (known as the “Bai Causeway”) as a walking path connecting Broken Bridge on the north rim of the lake to Gu Shan, or “Solitary Hill,” to the southwest.

We weren’t alone, not least the Su Causeway was packed with Chinese tourists, couples having wedding photos taken, and even a group taking pictures of twins. We had a very enjoyable trip around the lake, enjoying the beautiful scenery – I’m sure it must be really amazing in spring when the peach and magnolia trees blossom.

On the way around the lake we passed the Leifeng Pagoda, an octagonal, five-storey brick and wood structure that was originally constructed in 975. The Pagoda was built by the King of Wuyue Kingdom, Qian Hongchu, to commemorate the birth of his son by Huangfei, his favorite concubine. During the 1600s, the Pagoda was destroyed by the Japanese, leaving only the brick skeleton. After repeated looting of the Pagoda’s remaining artifacts, the building collapsed in 1924. The pagoda became a household name in China thanks to the popular folk tale, “The Legend of the White Snake”, a love story about a young man and girl who changed into a snake. The story has been repeatedly adapted for traditional operas and also for film and TV.

In the story, the couple is separated by an evil old monk with magical powers, who had the snake girl imprisoned under the Leifeng Pagoda for years. She is finally rescued by her son who caused the collapse of the pagoda. The true story is that people believed that a brick from Lei Feng Pagoda would bring good luck and wealth to the family. Many poverty-stricken people believed this common superstition and they began to remove bricks from the pagoda and placed them on their family altar. Within a few years the foundation of Lei Feng Pagoda was wrecked and it collapsed. The Leifeng Pagoda was a national icon for the Chinese and in 1999, reconstruction efforts began. The Pagoda was completed in October 2002 – and opened just days after our last visit to Hangzhou. As can be seen in the photos the pagoda provides a picturesque backdrop for West Lake and the surrounding hills.

The new pagoda was build on the top of the original one and the old pagoda is still to be seen from the bottom floor of the new one. In the debris of the fallen pagoda Buddhist scriptures were found telling that the pagoda was constructed by the king of Wuyue and that 84,000 volumes of Buddhist scriptures had been stored here. Viewed at sunset from across the lake, the pagoda is lit and looks magnificent.

We made our way around the final part of the lake and rested on a bench with coffee and cakes. Shortly afterwards a couple set up shop and started to play and sing – many Chinese stopped up and listed, for western ears it sounded terrible. Back at the hotel we rested before going out for dinner – easier said than done, eventually finding a restaurant that was neither full nor empty, and had a very enjoyable Chinese meal. For the first time we were given bamboo to chew/suck, which was very refreshing – now we know why the panda’s eat bamboo!

The evening was chilly as we walked back to the hotel. We were all a bit tired and many minutes hadn’t passed before we’d all fallen asleep. The LakeView hotel is an excellent hotel with a great view of the West Lake – the one BIG problem is that there is a discotheque close by that plays very, very loud music late into the night.