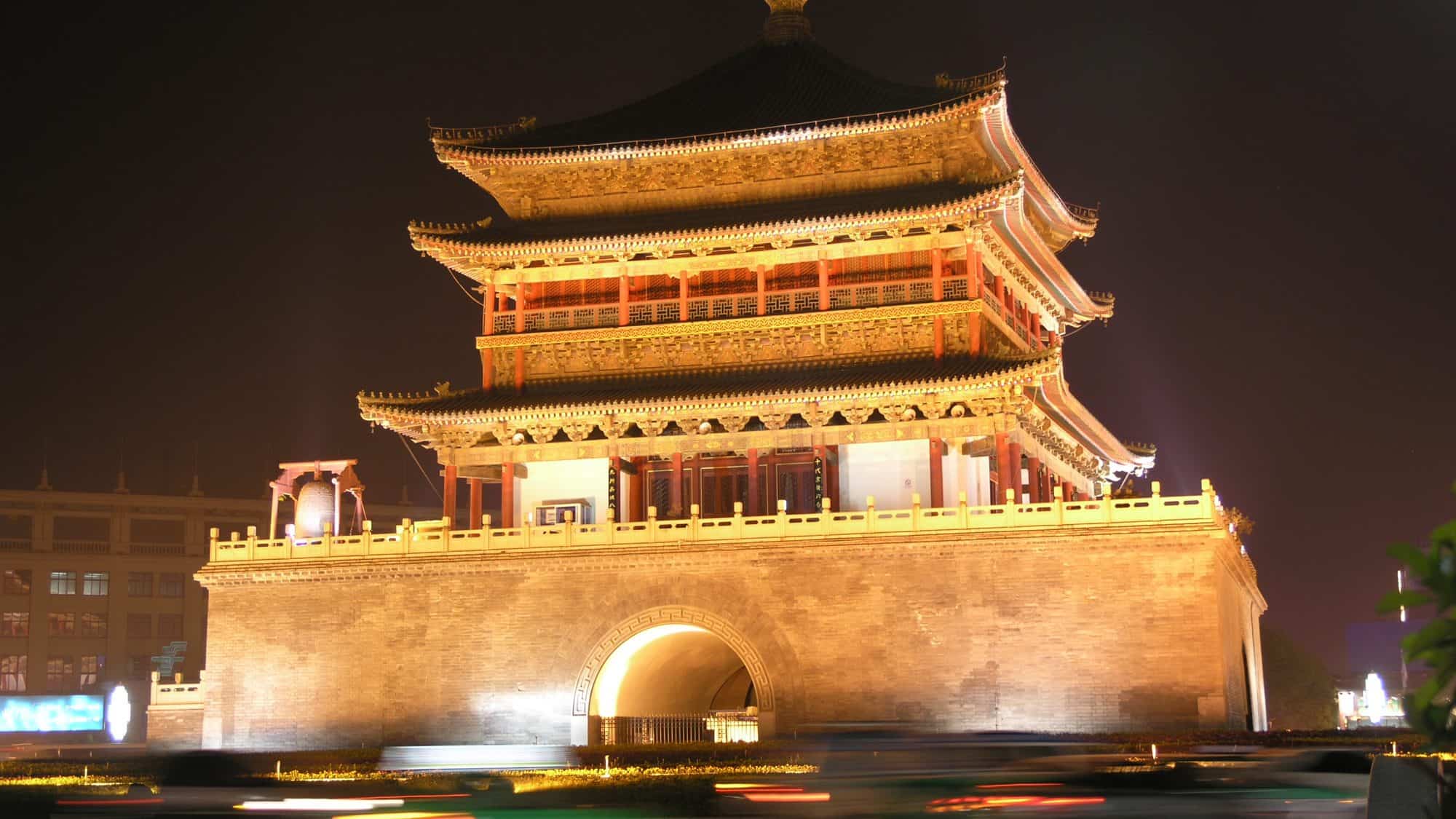 The Great Wall is truly unbelievable, the Forbidden City amazing, the Summer Palace beautiful and the Temple of Heaven heavenly; however one runs out of superlatives after seeing the Terracotta Warriors. It is proclaimed to be the 8th wonder of world – the ultimate superlative – a superlative we would not argue against. It is impossible to imagine the effort that must have gone into such an undertaking and that something that so big and had involved so many people, just got “lost” through the years and was found by chance! 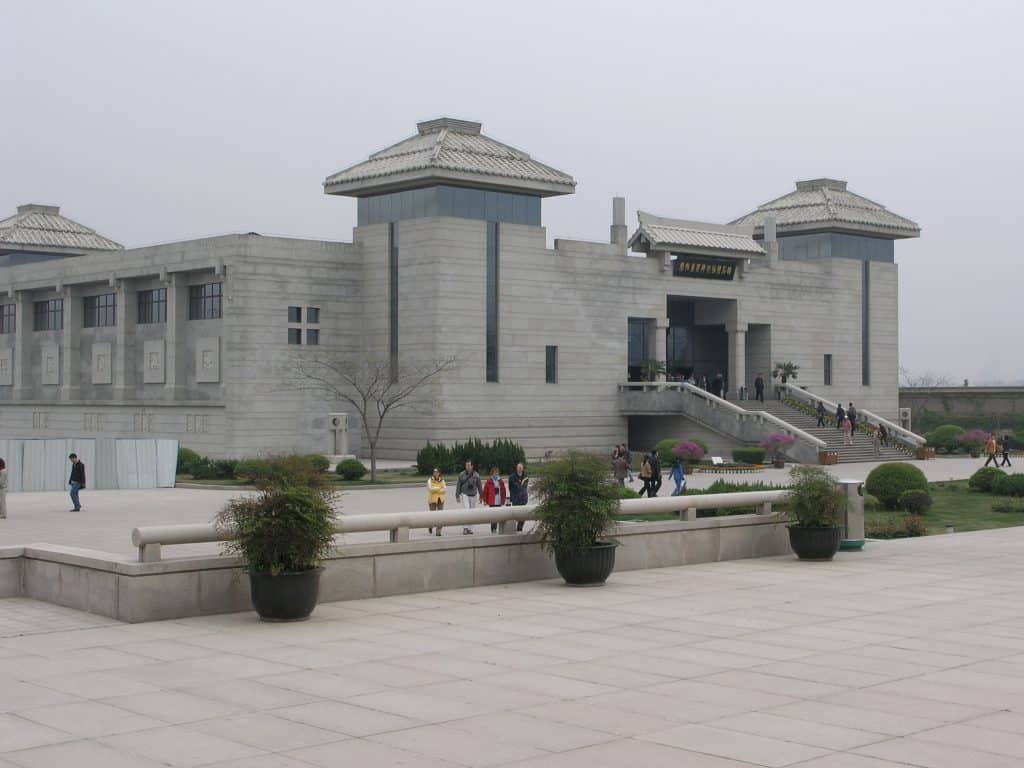 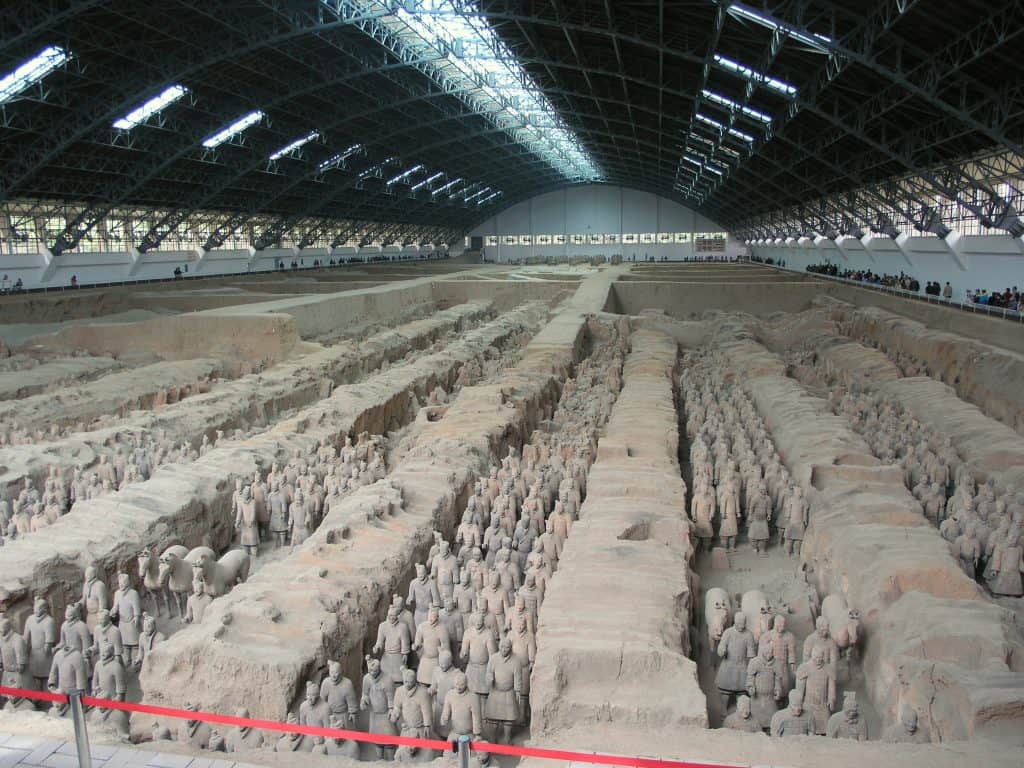 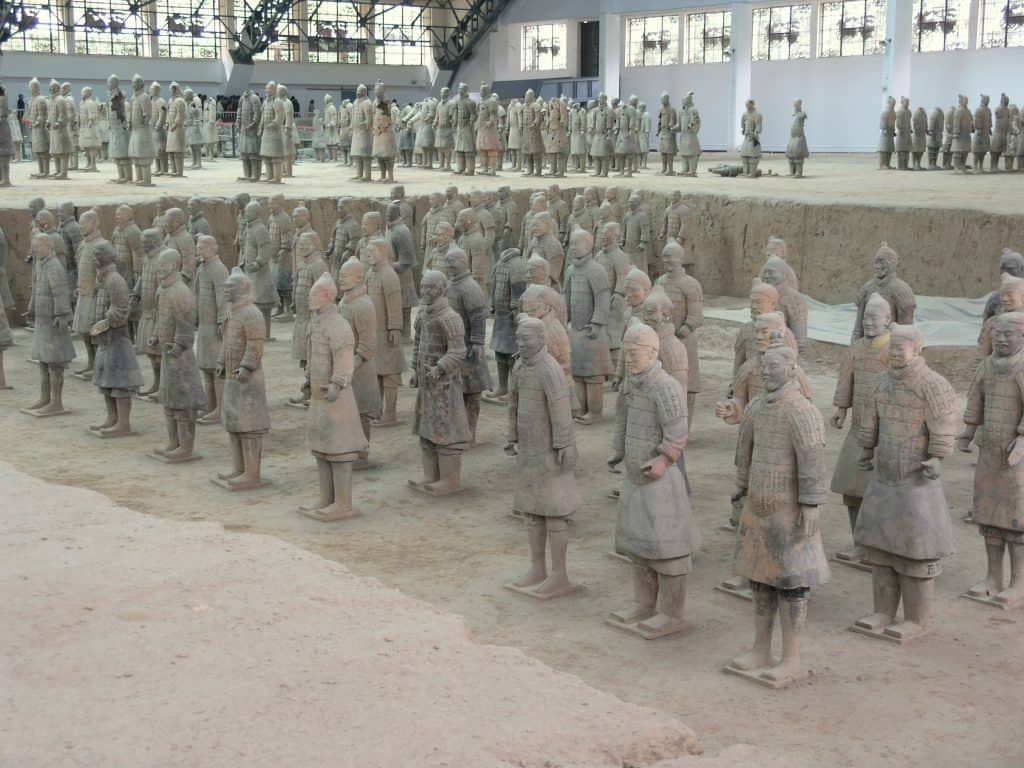 We breakfasted fairly early and took a taxi to the bus station, next to the railway station. The museum lies 35km east of Xian and the “local” way to get there is on bus 306. Of course, once you get to the bus station there are lots of signs for bus 306 – all of them to trap tourists – the local bus is a green bus that stops on the corner of Jiefang Road, facing the railway station. The bus fare is 7 RMB per person – return! and the bus seems to depart every 5-10 minutes. The downside is that the bus is packed to every last seat – but entirely with locals. An elderly couple who were allowed to get on board first, saved two seats for us. The upside is that many tour buses only allow you to stay a couple of hours to see the army, with the local bus you can stay as long as you like. The bus trip takes about an hour, we were the only tourists and we assumed that everybody was going to the see the Terracotta Soldiers, so we were surprised when the rest of the bus got off at Huanyuan Gardens. 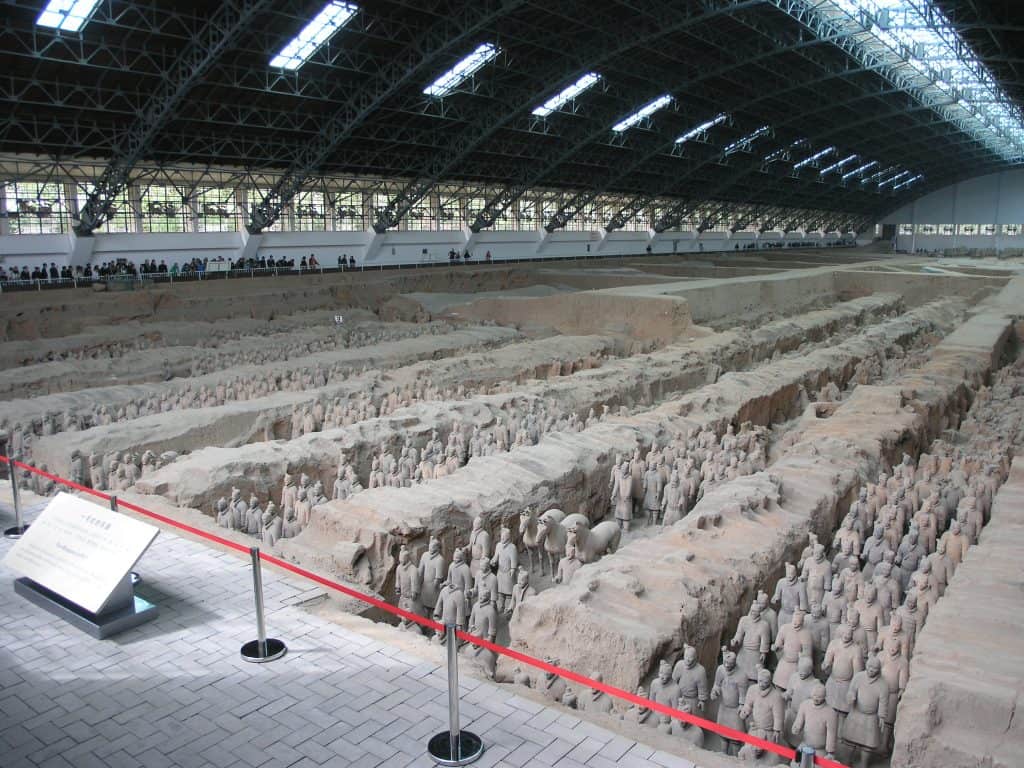 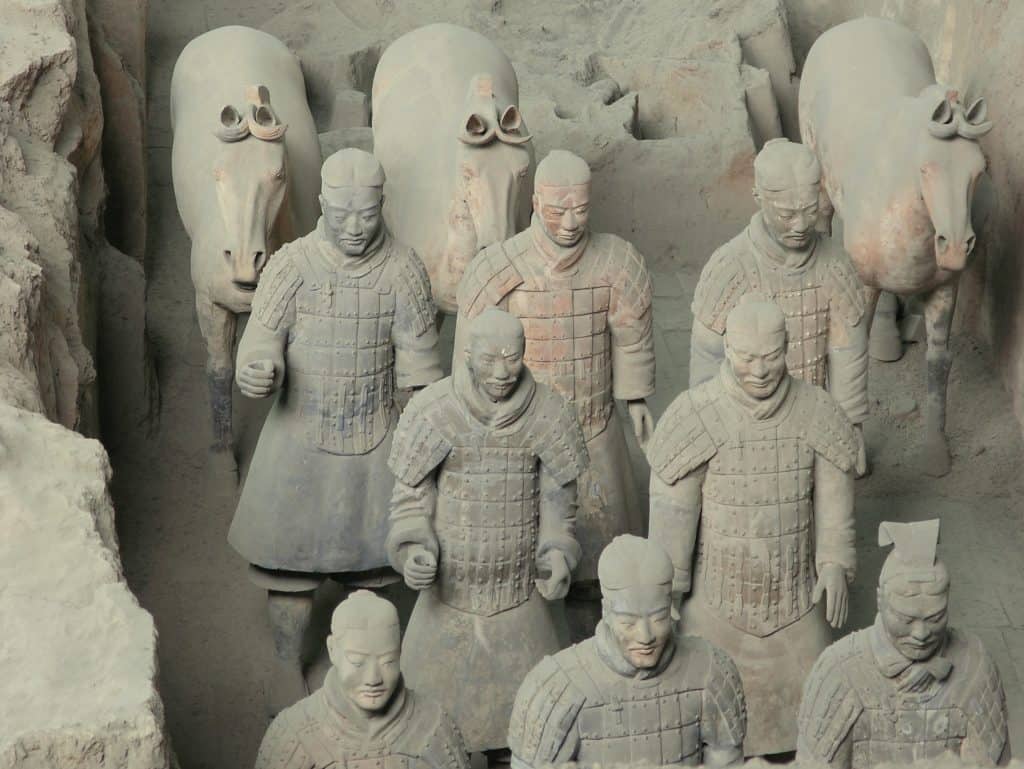 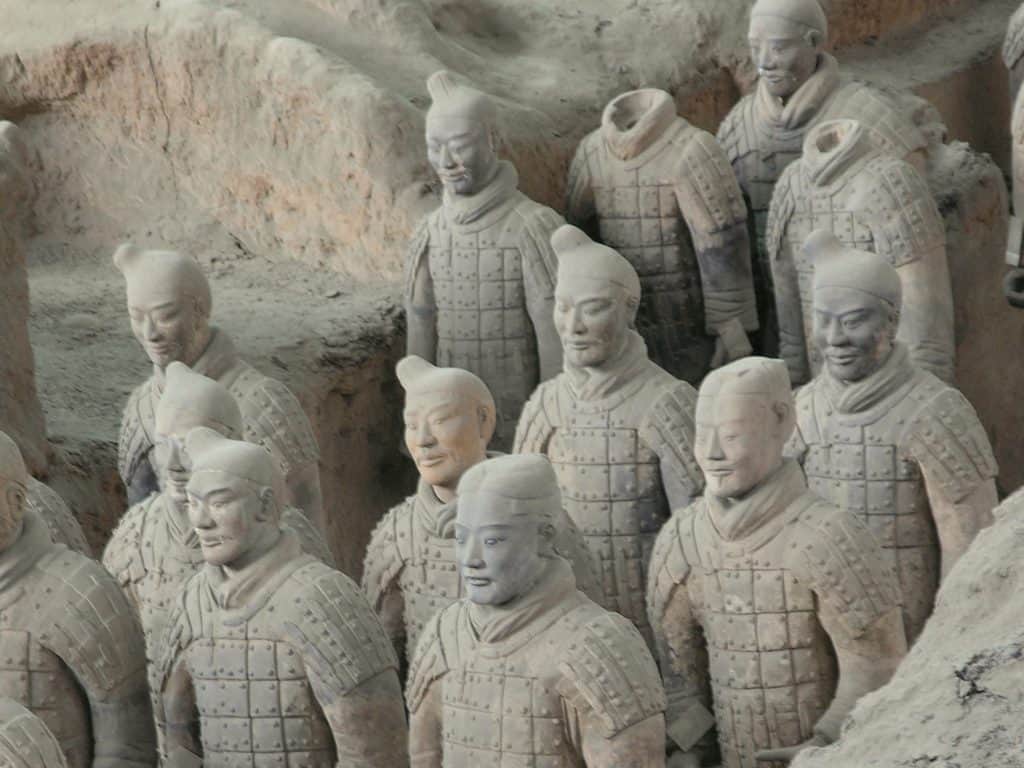 We paid or 90 RMB entrance and were a bit surprised that there were so few people and no queues. Most people go to pit number 1, but we started in the 360 degree cinema to see a film about Qin Shihuang and the building of his mausoleum, which lies about 1km from the current findings. The mausoleum itself is still intact ca. 2200 years after his death. The film lasts 15 minutes and gives a good background and introduction before seeing the soldiers. 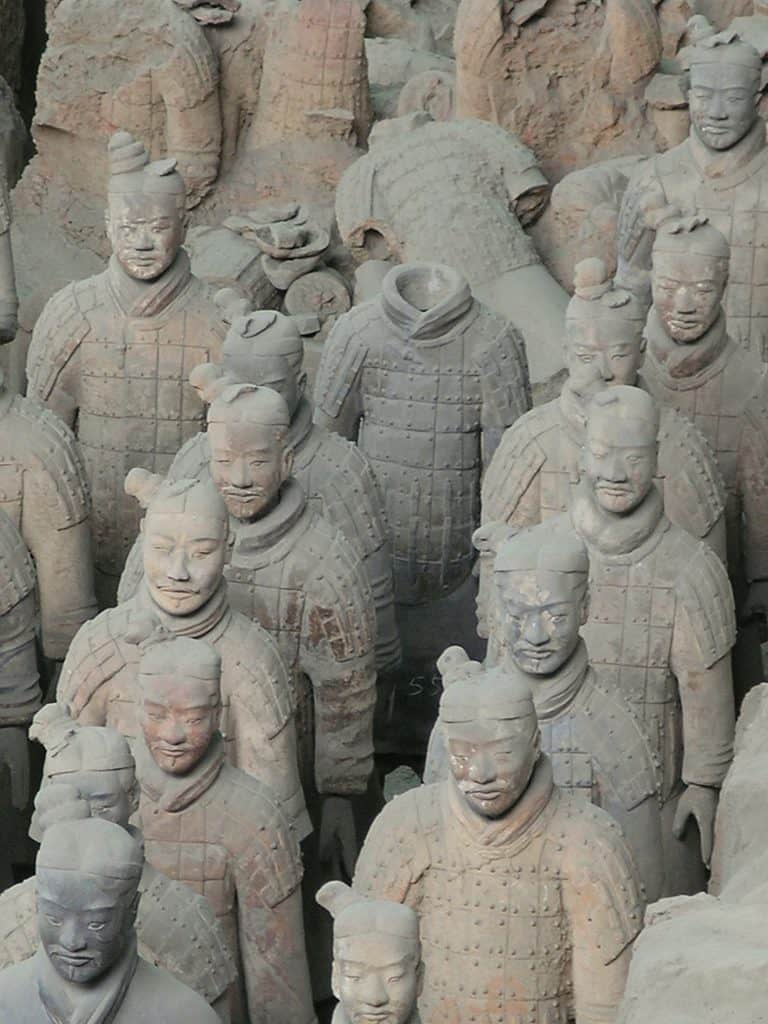 Pit 1 is the largest excavation, initially found in 1974 by farmers looking for water, the pit is 230m long, 62m wide and 5m deep and the southern flank of an army created to protect the Kaiser counting 8000 soldiers, horses and the remains of chariots. On display are over 1000 soldiers, between 1m70 and 1m90 and each with a different facial expression reflecting the the different regions of China, horses and weapons. The army has a 3 man deep front, each row of 70 soldiers, followed by 11 columns of soldiers, horses and chariots. 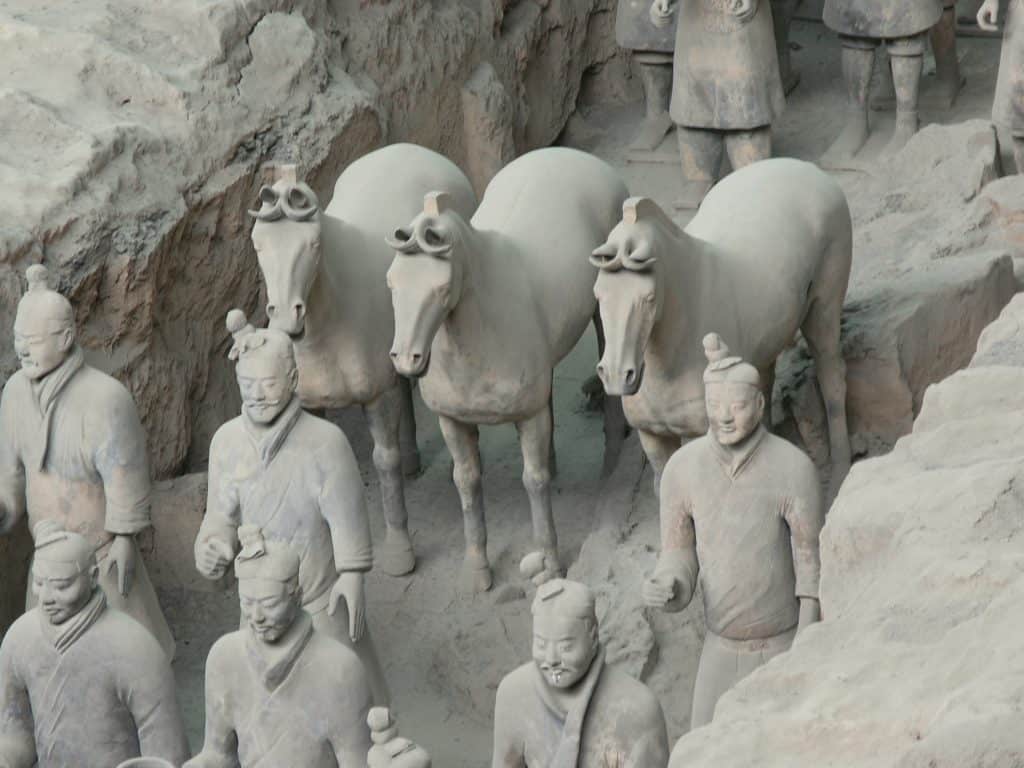 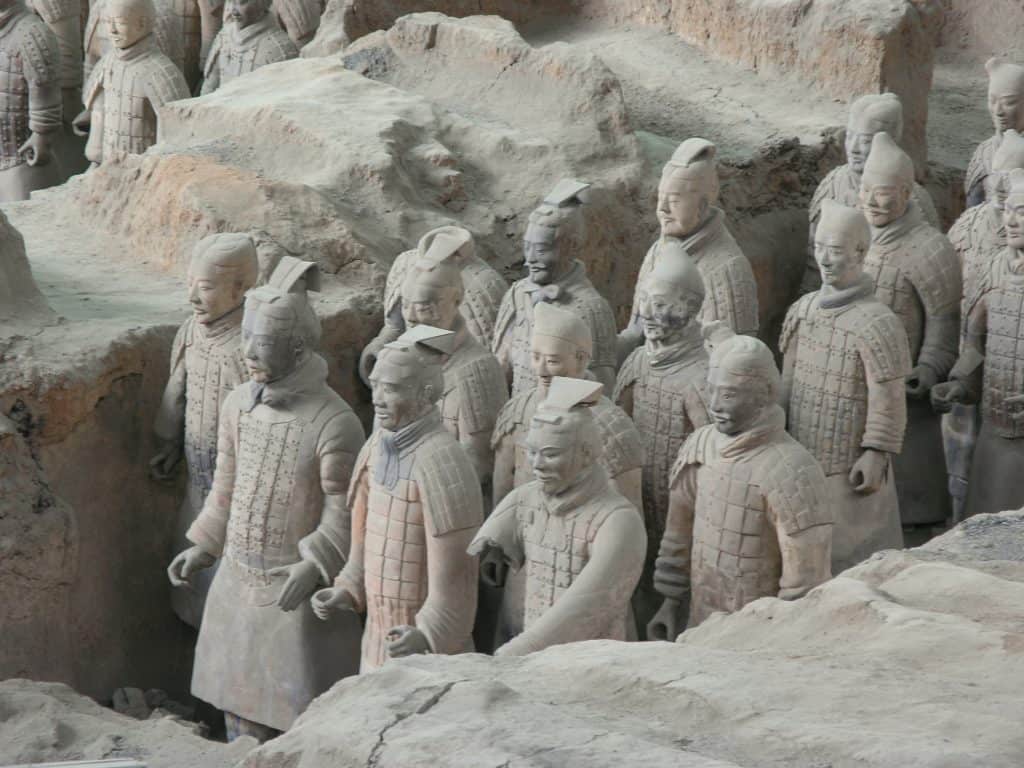 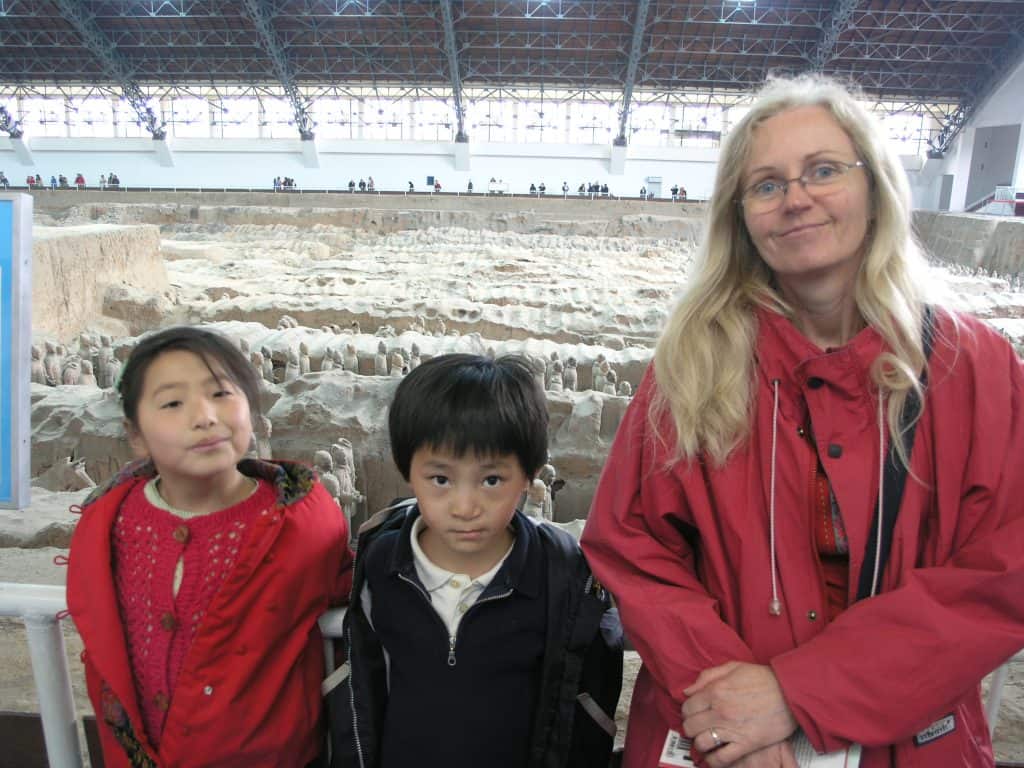 The second pit contains the left flank of the army and was opened in 1989 whilst the small third pit contains the quarters for the officers and generals, with 68 figures – each of which has lost its head. This was opened in 1994. In addition to the figures, thousands of weapons, not made of terracotta have also been unearthed, and many of these are also on show in one of the buildings.

We stayed about 3 – 3,5 hours. They museum made a lasting impression on us all, not least Daji who spoke about little else during the coming days. What is truly amazing is the level of detail that has been put into each soldier and horse, and the sheer numbers. According to the film, it is estimated that 10% of China’s working population or ca. 700.000 men during 37 years worked on the soldiers (and another 10% on joining the different parts of the Great Wall which was taking place around the same time). 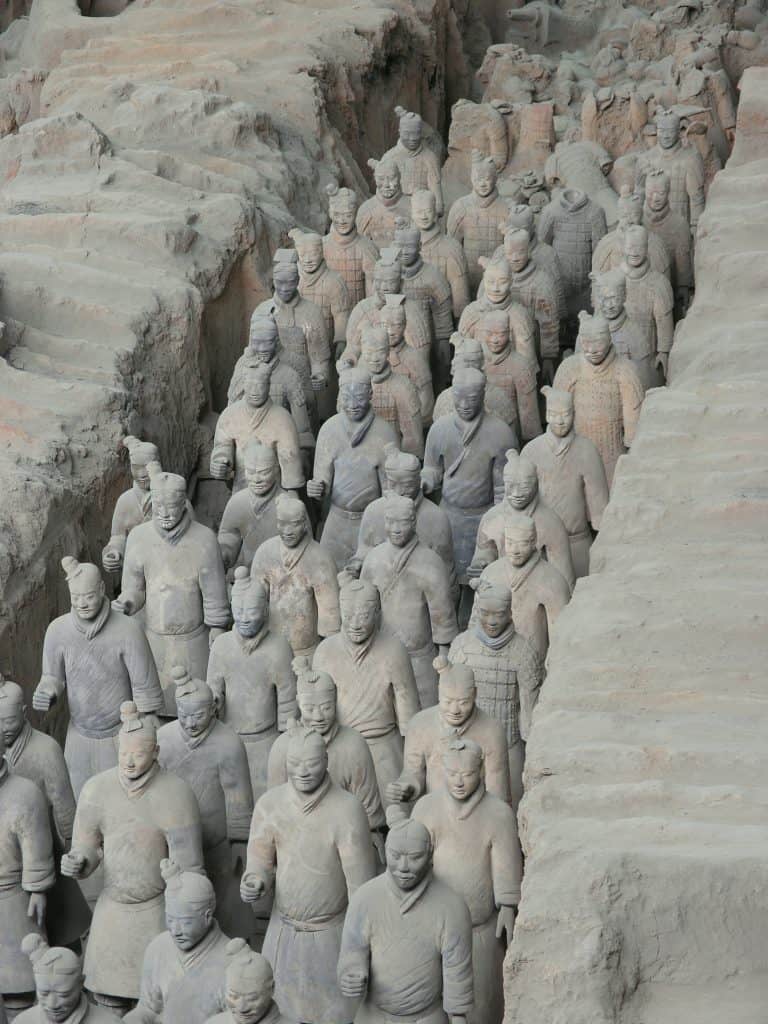 We took the bus back towards town and decided to get off at Huanyuan Gardens – where everybody had disembarked on the way to the Terracotta Warrior Museum. The gardens turned out to be China’s oldest spa, with 43 degree centigrade water coming from 4 springs. The spa has been used by Kaisers and their families for over 3000 years – not least when Xian was China’s capital. The building’s were rebuilt and renovated in 1900 when Empress CiXi resided in the garden, fleeing the invading armies. In newer times the garden is famous for the Xian Incident, where Chiang Kai-shek who used the garden as a base to plot against Mao and the Communists, was captured by two of his own generals who forced him to cooperate with Mao to fight against the Japanese imperialists.

The gardens were extremely well looked after with paths and lakes and many different trees, bushes and flowers. Part of the grounds and some of the buildings were being renovated to reflect their former glory – and here just as in Beijing, every detail was being taken into account. 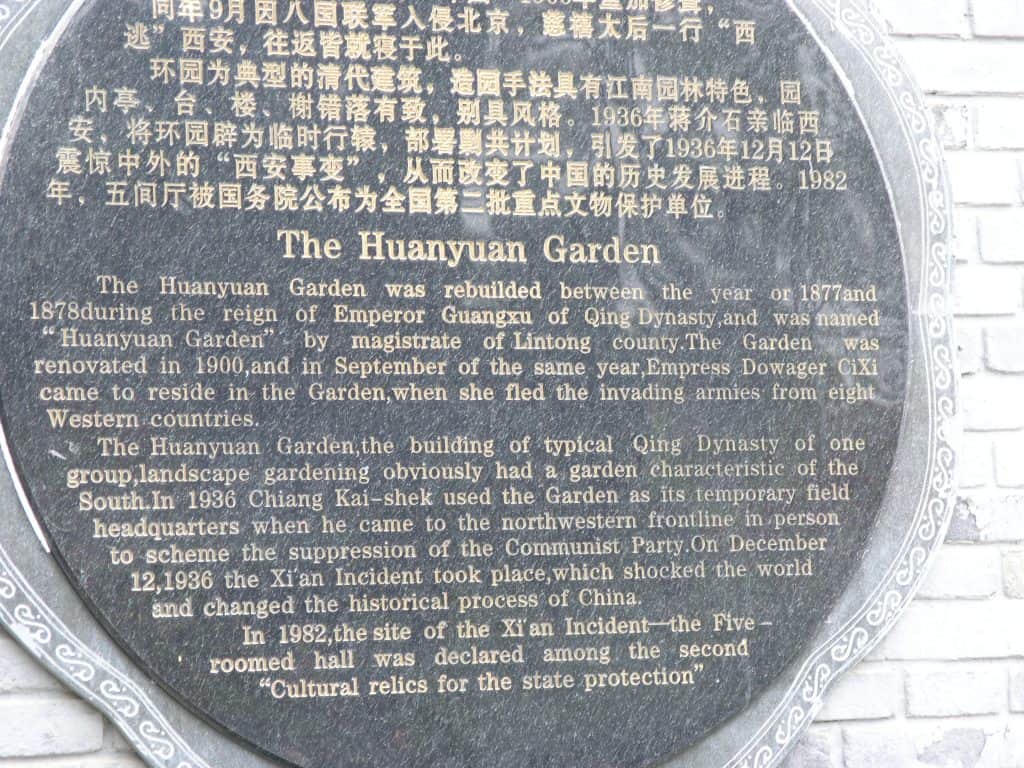 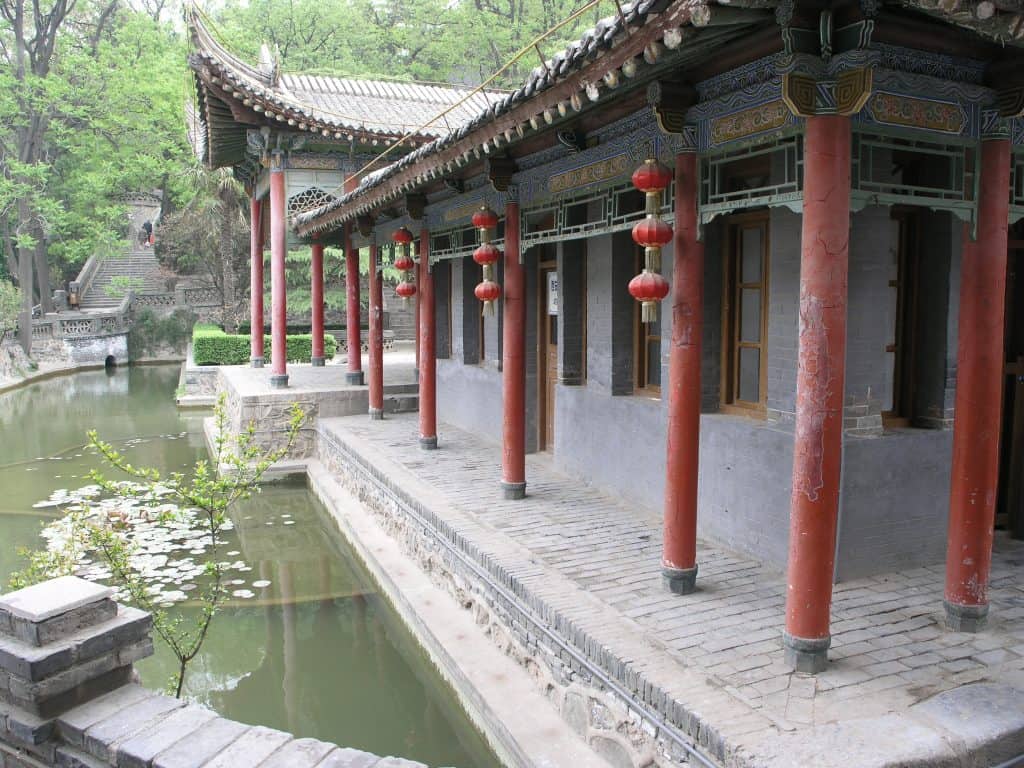 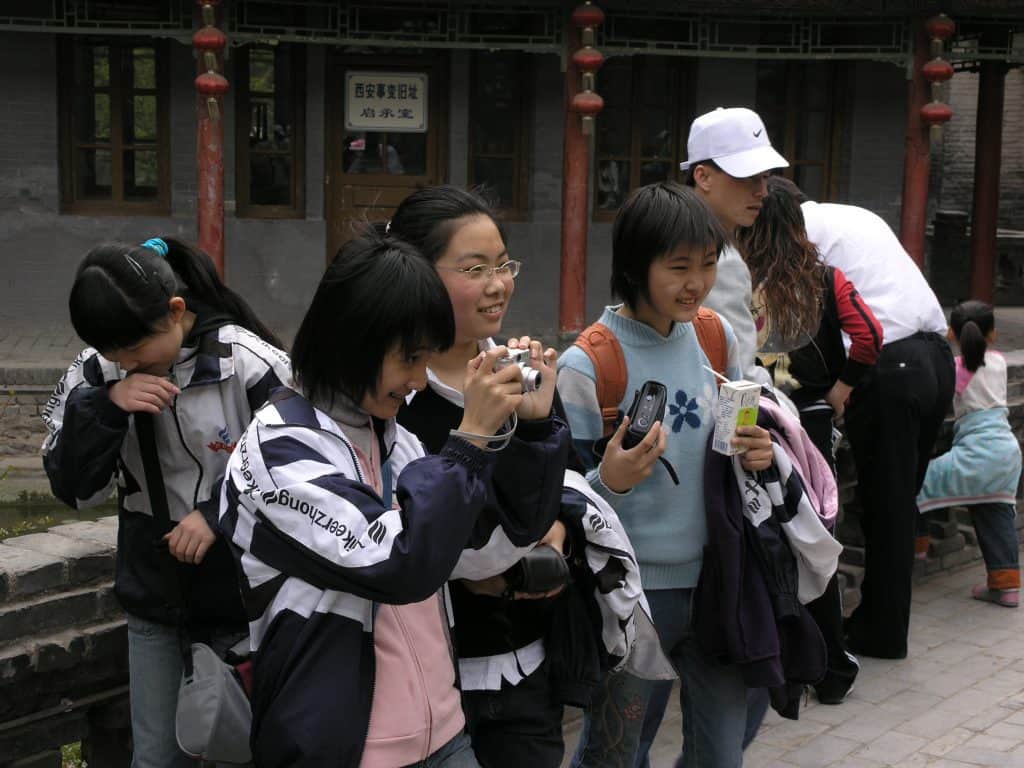 There were more visitors here than to see the Terracotta Soldiers, not least many groups of school children wishing to practice their English and take photo’s of us! It cost 70 RMB per person to visit the gardens, we felt that this was somewhat over the top, given it was 90 RMB to see the Terracotta Warriors. 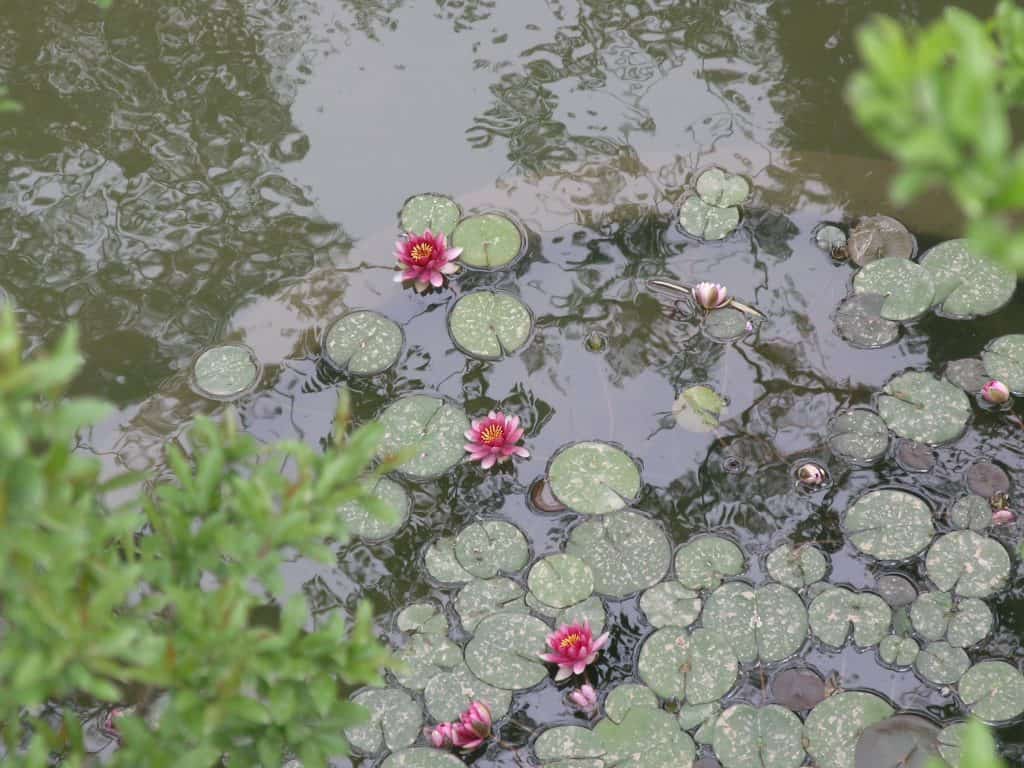 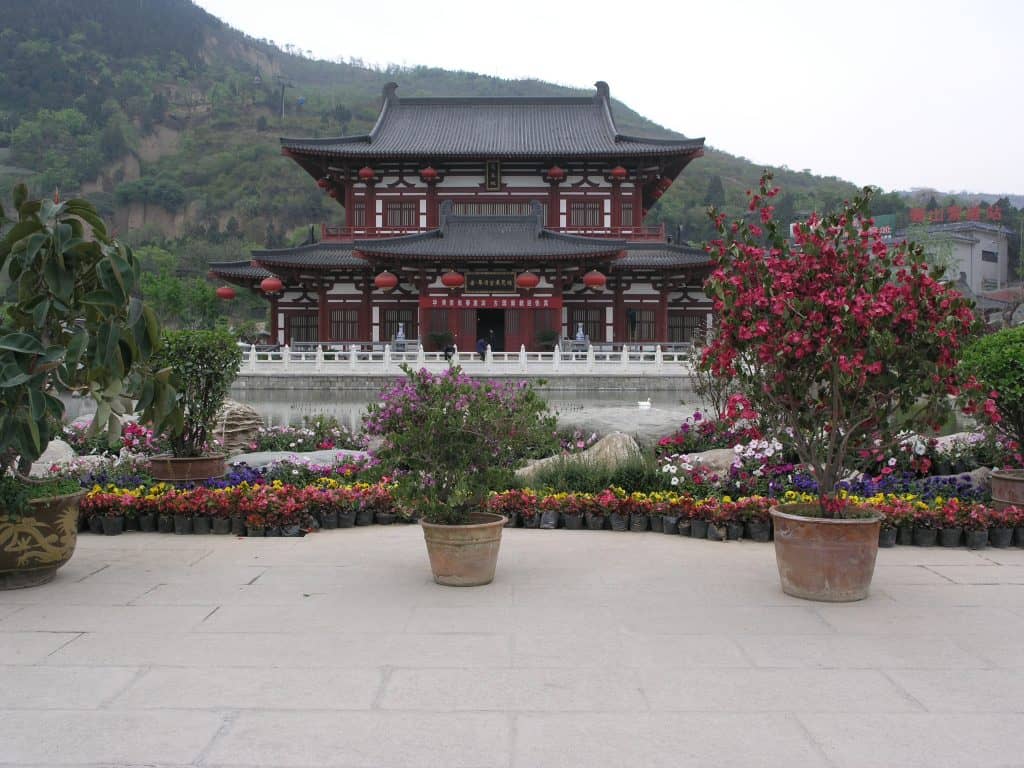 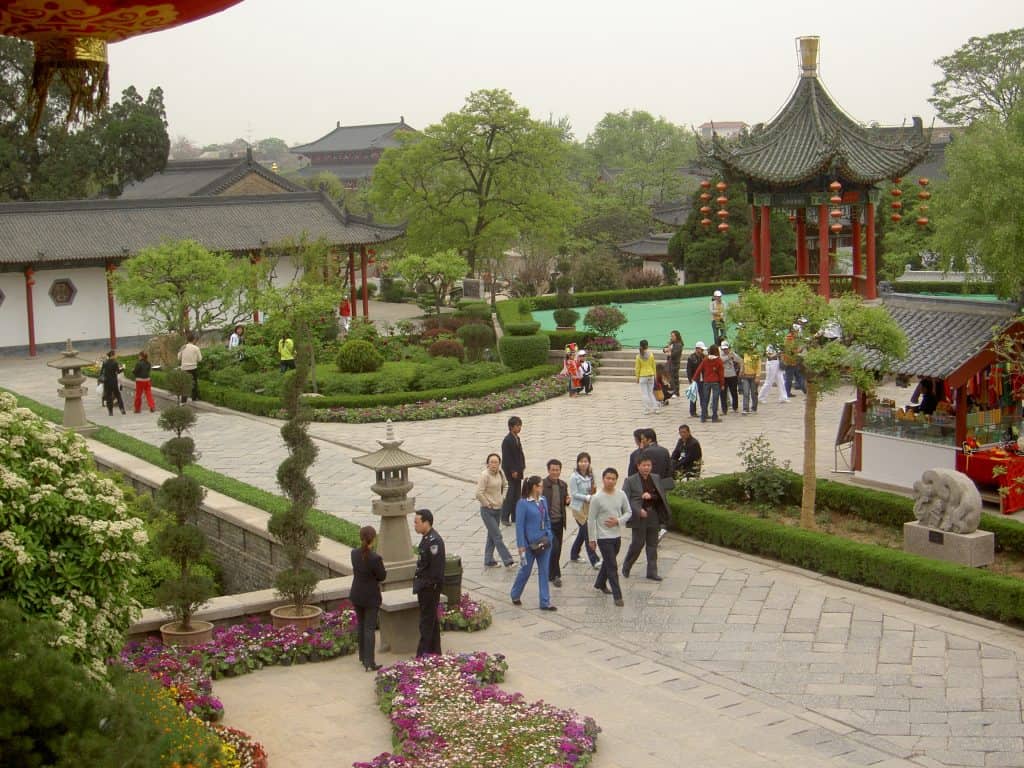 We took the bus back to Xian, unfortunately it was rush hour and it took ages to get the centre of town, the bus was packed and we had Yanmei and Daji on our laps – again. We arrived back at the bus station happy to be able to finally stretch our legs. We started to walk back towards the hotel, buying 4 Chinese pizza’s from another hole in the wall. We attracted a group of school boys wanting to practice their very limited English vocabulary. We also found a Carrefour – the French supermarket chain where we shopped during our years living in France – so we took a tour around and were surprised how much like a French Carrefour it seemed. 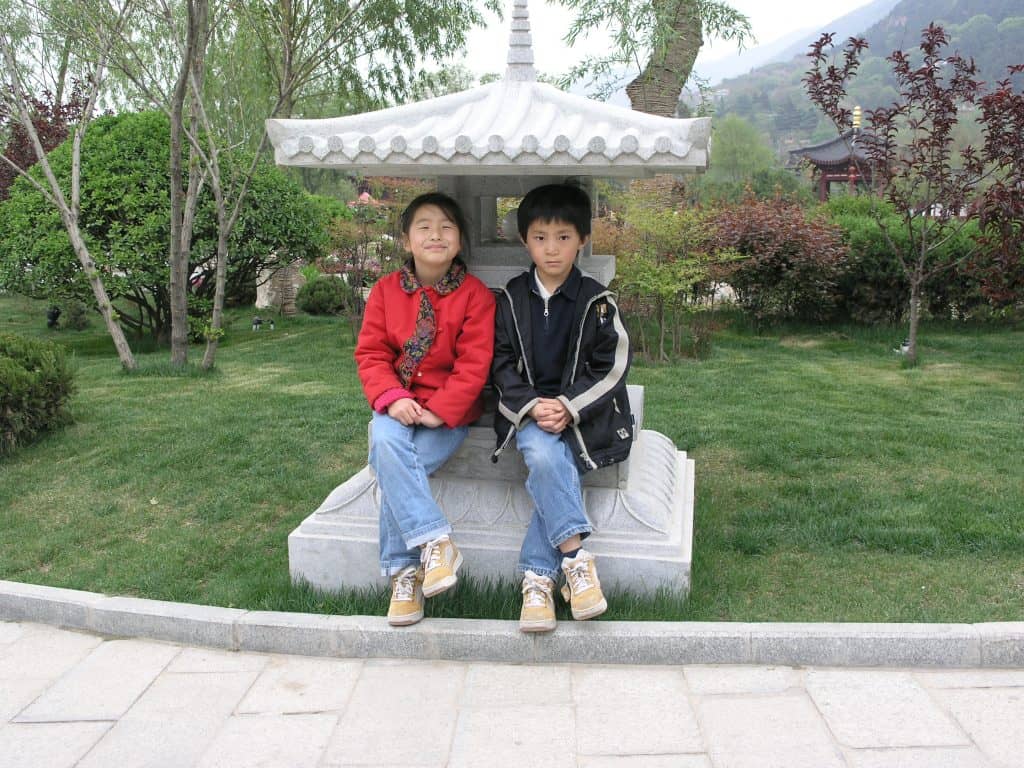 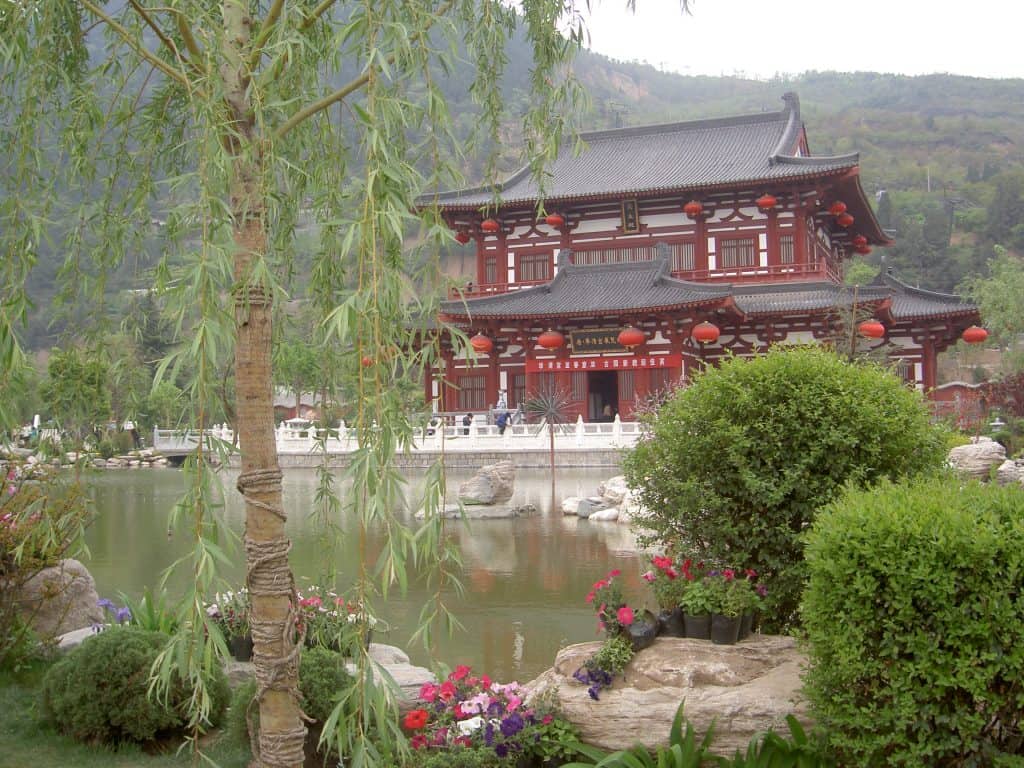 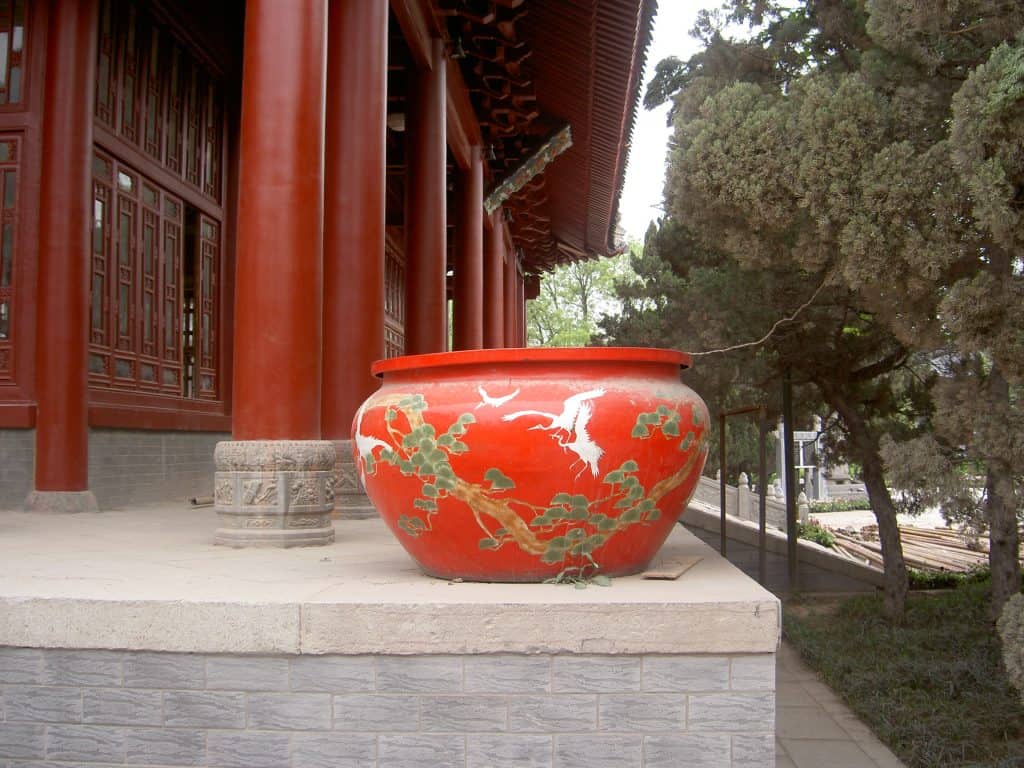 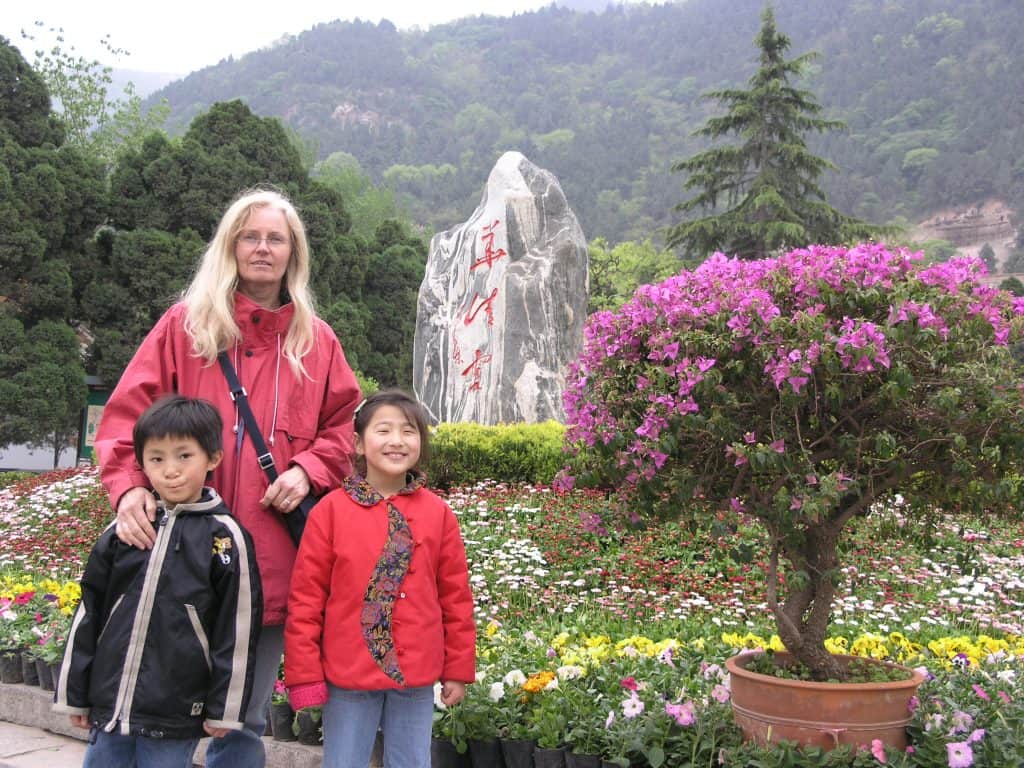 Back at the hotel we rested and saw TV until around 9pm and decided go out to find something to eat. It was dark by now, the Bell Tower was lit up, as was the rest of Xian it seemed. We decided upon a Chinese restaurant close to the hotel, but the menu was only in Chinese, and we didn’t have our picture book with us. We found another restaurant, where we ate, but unfortunately it turned out to only sell Italien food. The kids loved the spaghetti – but eating Italian, wasn’t really the reason we were in China!