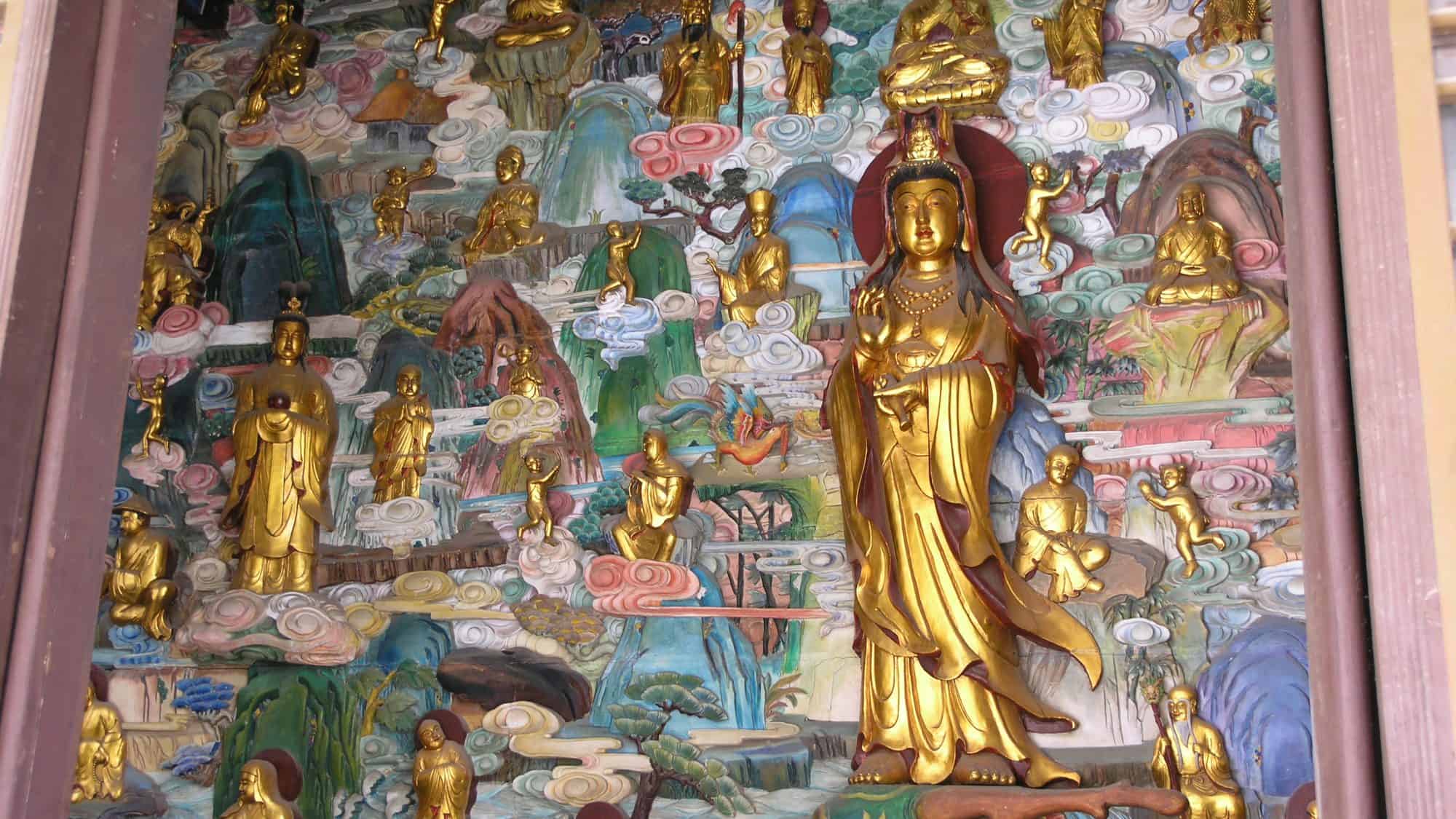 Today was our last day in Xian and we would be leaving for Lanzhou by train late in the evening. We were beginning to feel that we were reaching saturation point after all the things we’d seen and done in China, but also beginning to feel excited as our real goal for the holiday, the trip to Jinchang, was getting closer.

The weather was sunny but cold first thing, but it got much warmer during the day. We breakfasted and packed, checked out. Again we’d been promised a late check-out, but it turned out only to be OK if we paid extra. As we wouldn’t be close to the hotel anyway, we left our luggage at the front desk, hailed a taxi and headed south towards the Big Wild Goose Pagoda. 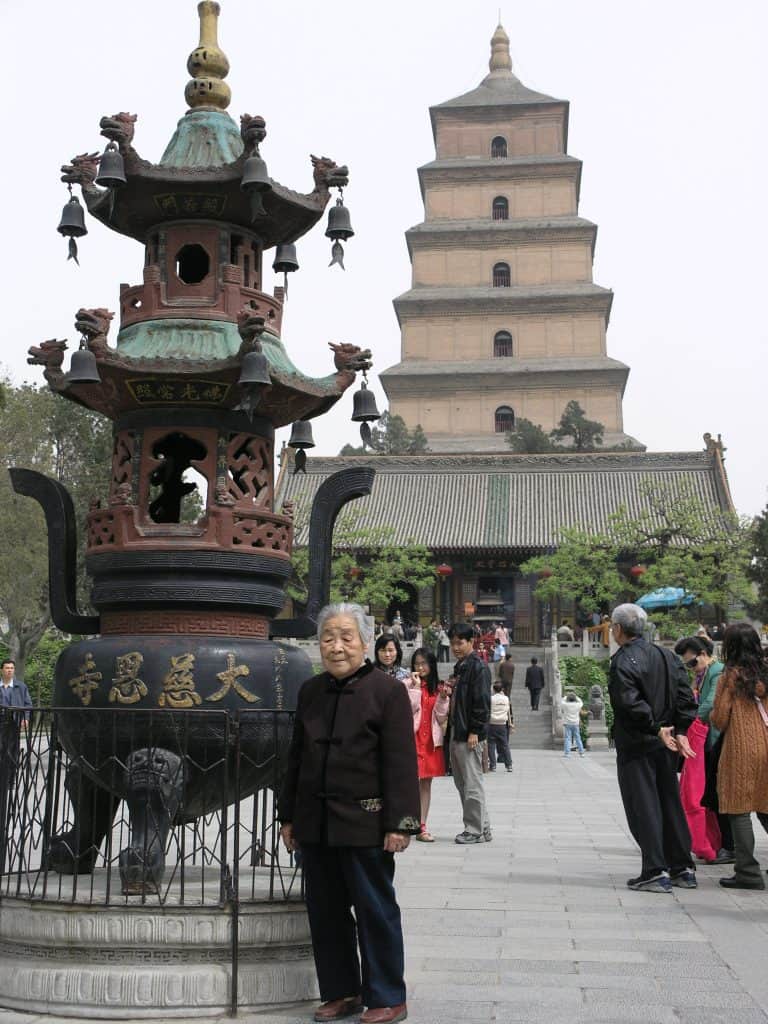 The Pagoda was built 652 during the Tang Dynasty and contained five floors. It was built in Indian style to store important Buddhist writings that Xuanzang brought home from a trip to India. The Pagoda has since been re-built several times and is now 64m high covering 7 floors. It is part of a temple complex, Dazhen, and monks still live here. 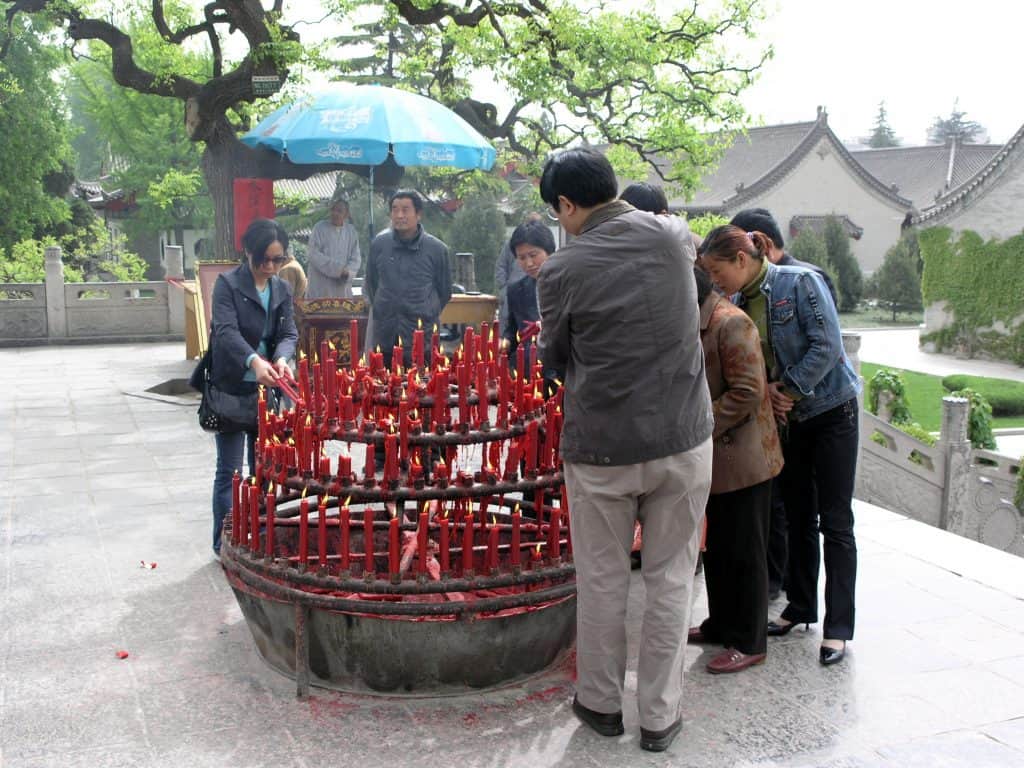 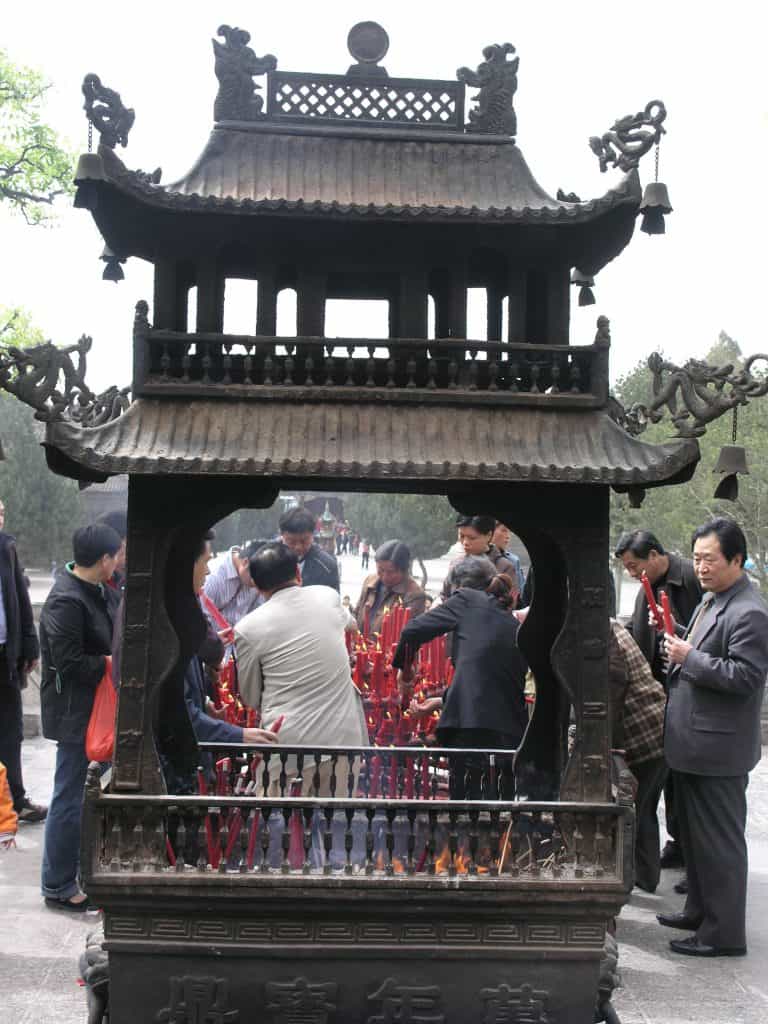 As with all tourist attractions in China (or so it seems) the Pagoda and it’s gardens are beautifully looked after. Daji, Yanmei and Steven climbed to the top of the Pagoda, Lene stayed and enjoyed the sun in the gardens. The view from the top is terrific in all directions – and even better if the weather had been less hazy – although I’m not sure that it is ever the case. 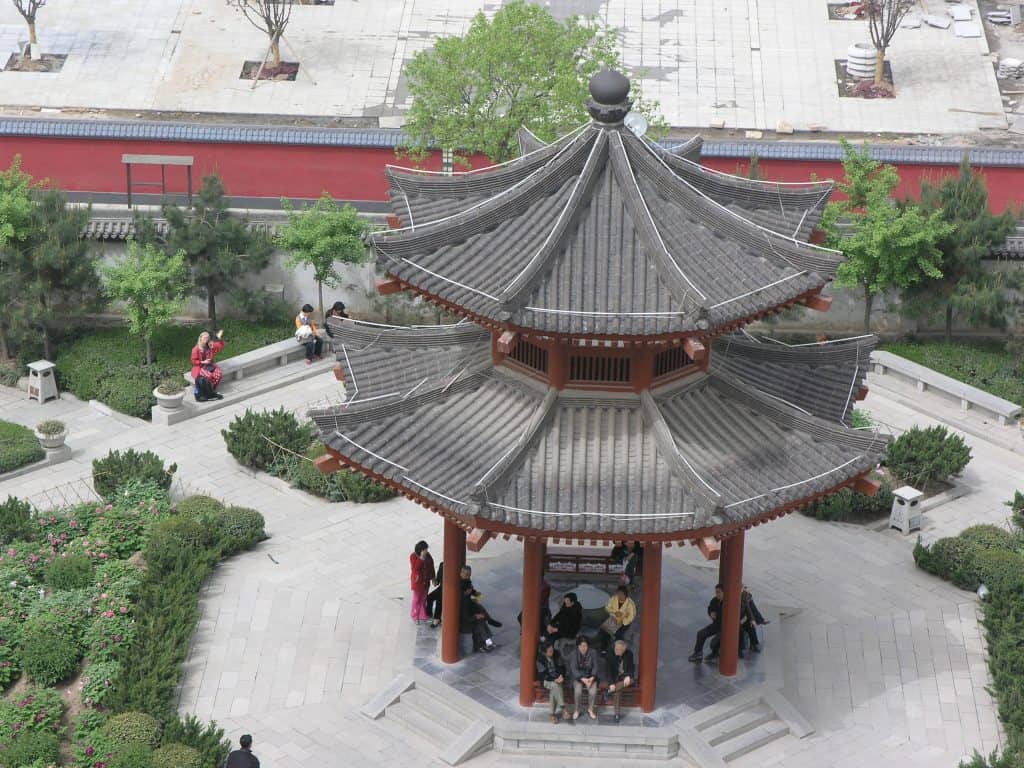 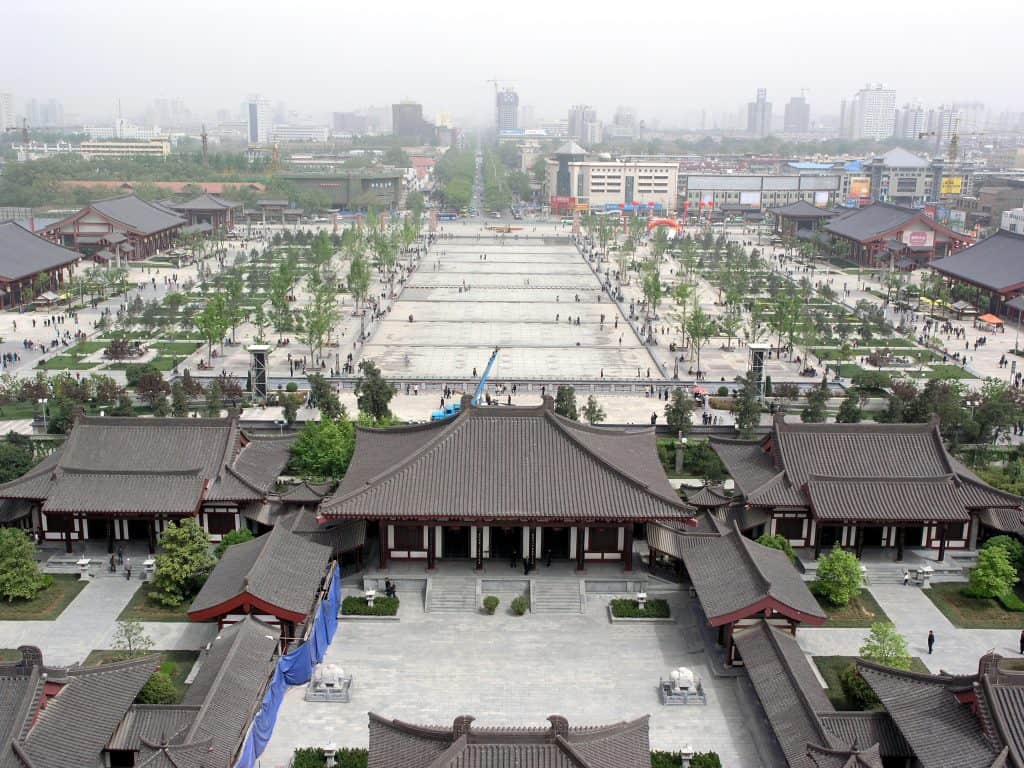 We left the Pagoda and walked through a park just to the north. We sat down on a bench to take some water – it was hot now – and quickly drew the crowds. At one time there were about 60 or 70 people in front of us, initially just staring and talking to each other. We tried to explain that Yanmei and Daji were Chinese from Jinchang and Yiwu. 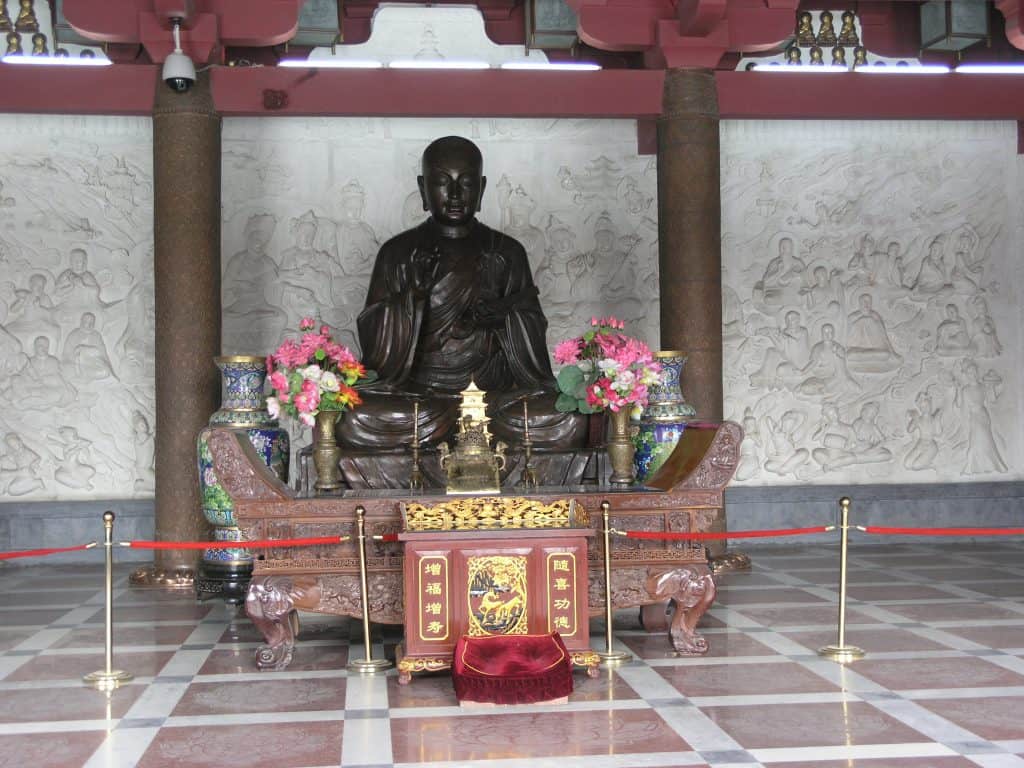 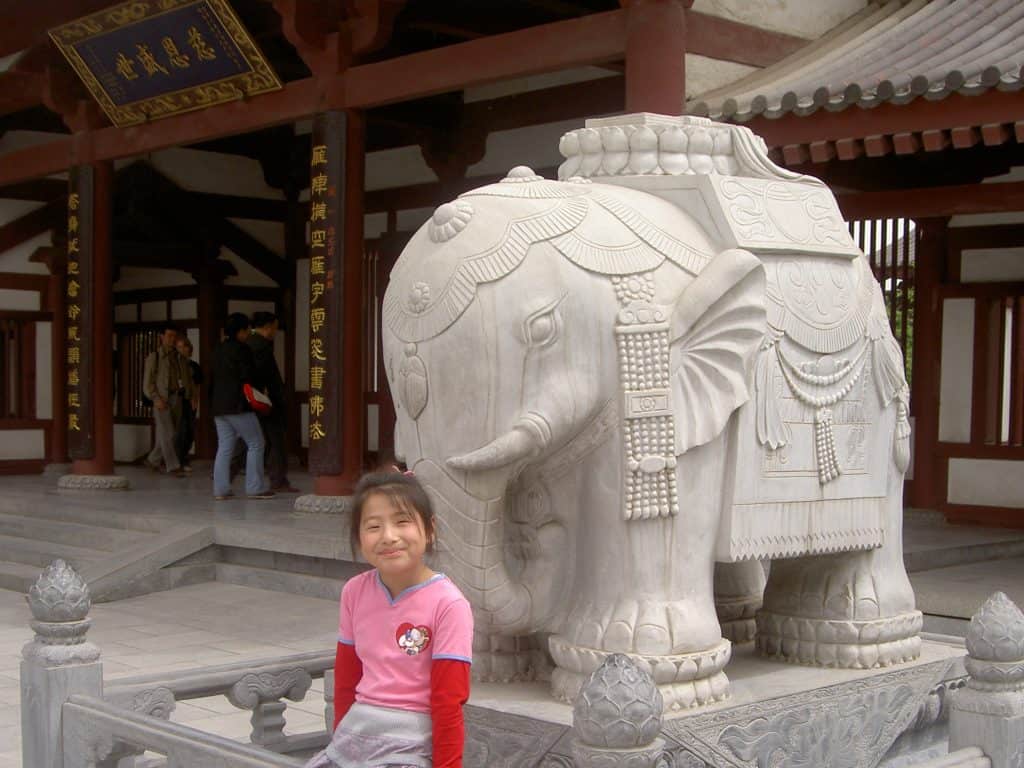 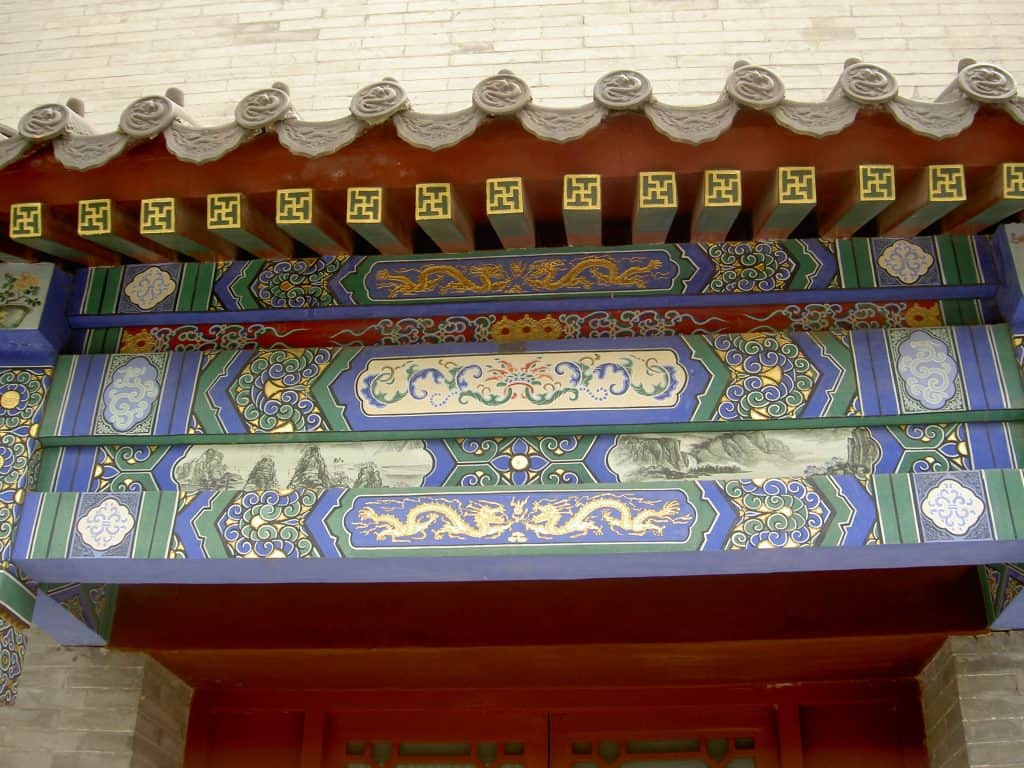 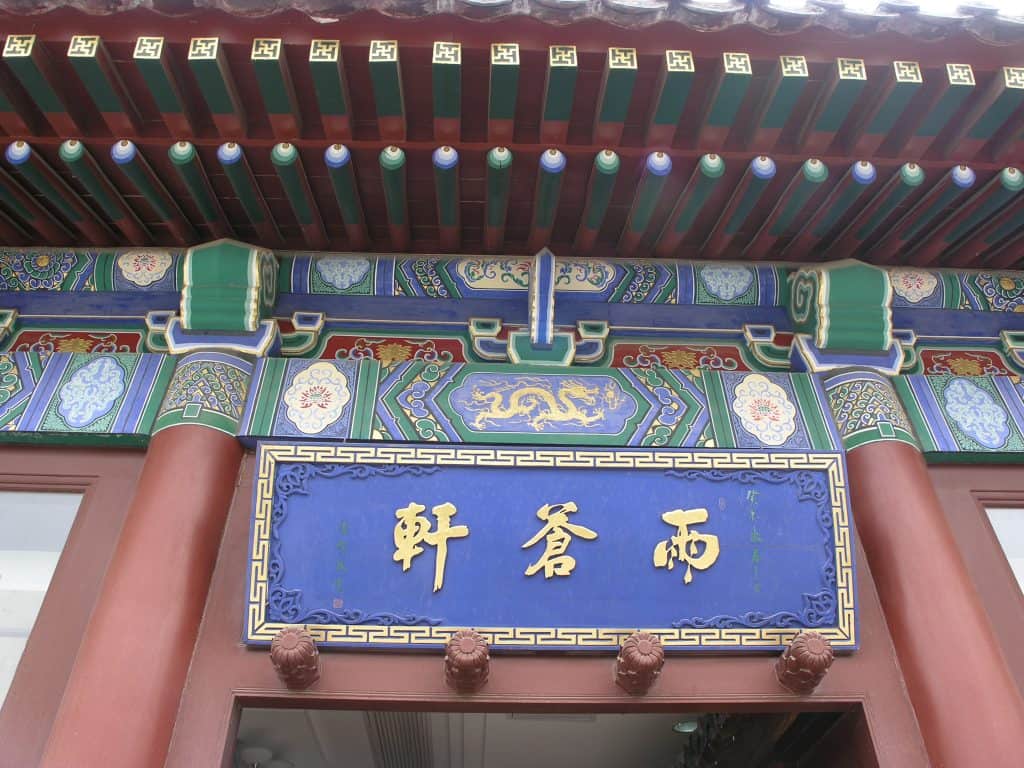 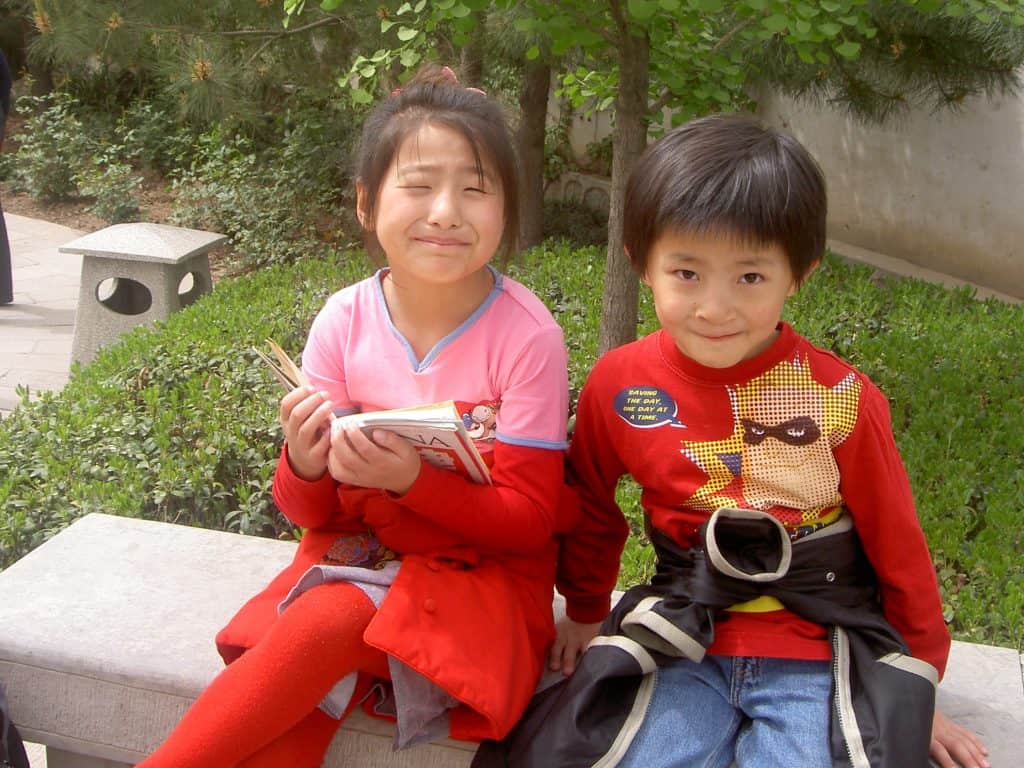 Finally somebody that spoke a bit of English came forward and prompted by the crowd asked some questions. Eventually they dispersed and we could move on. Xian, more than anywhere else, was where people stared at us, took photo’s of us and stopped us to ask questions. It seemed that the vast majority of people coming to Xian come in groups, and they just weren’t used to seeing tourists alone, let alone with Chinese looking children. 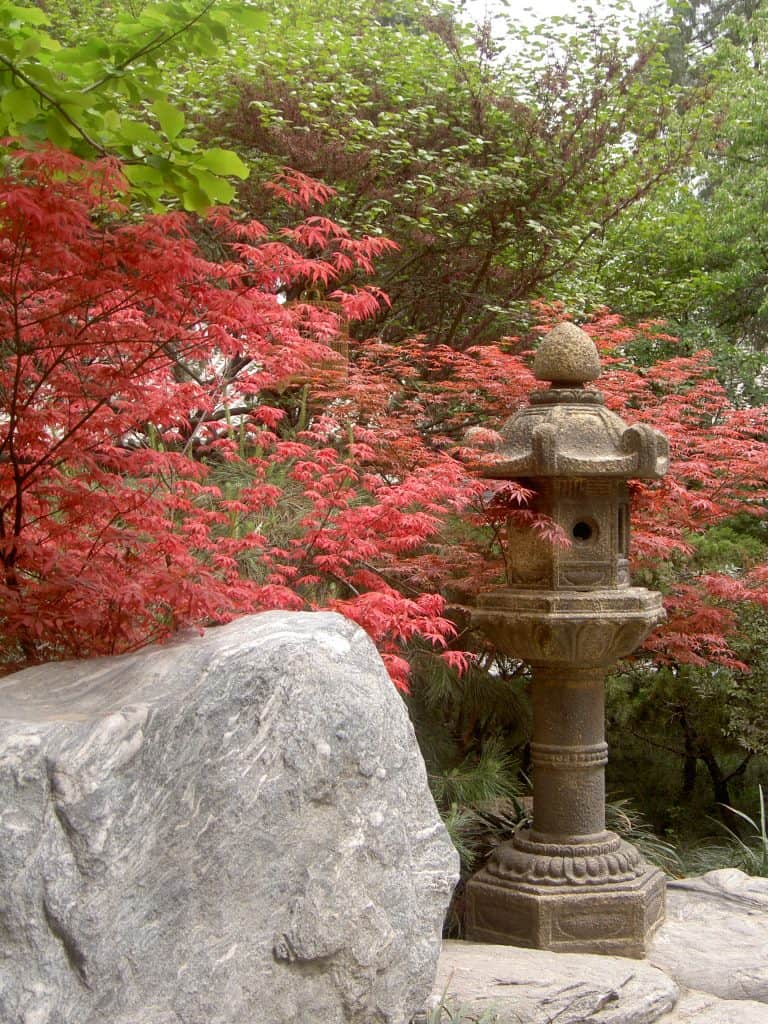 It was around lunch time and we took a taxi towards the southern section of the city wall. The wall is 12m high and 14km long and it is now possible to walk (or rent a bike) around the whole wall. We took the 3,5km section from the southern section to western section. At least on this section you are pretty much alone as you get a great view of life inside the wall and not least how the old buildings are being pulled down and new homes erected. 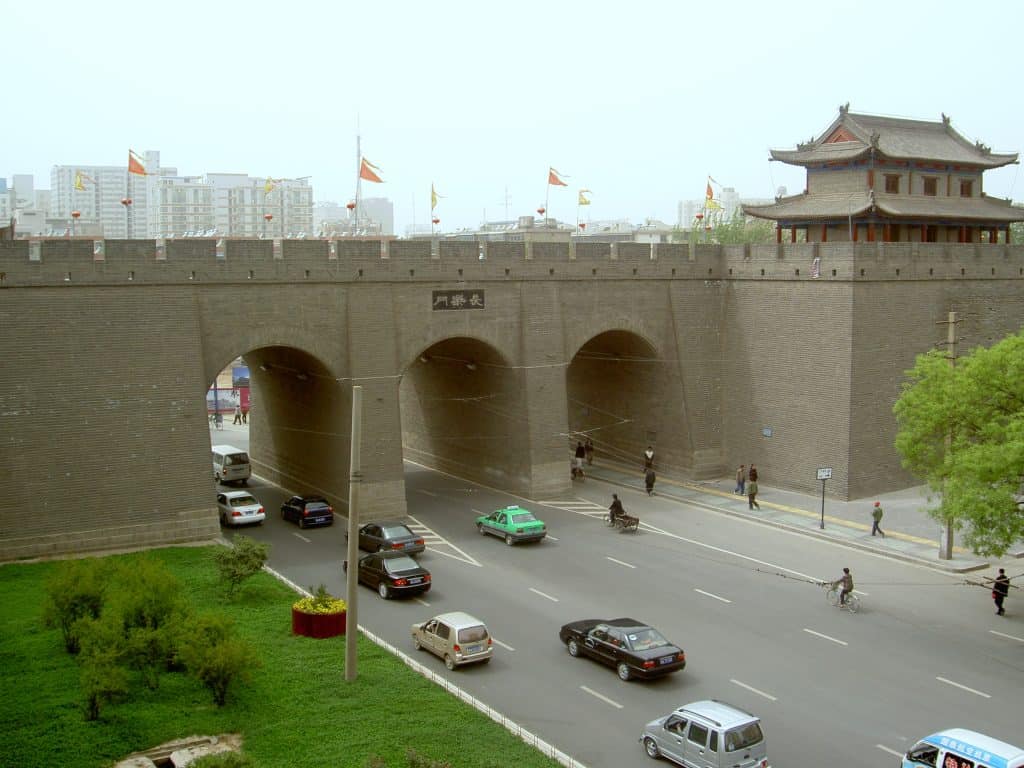 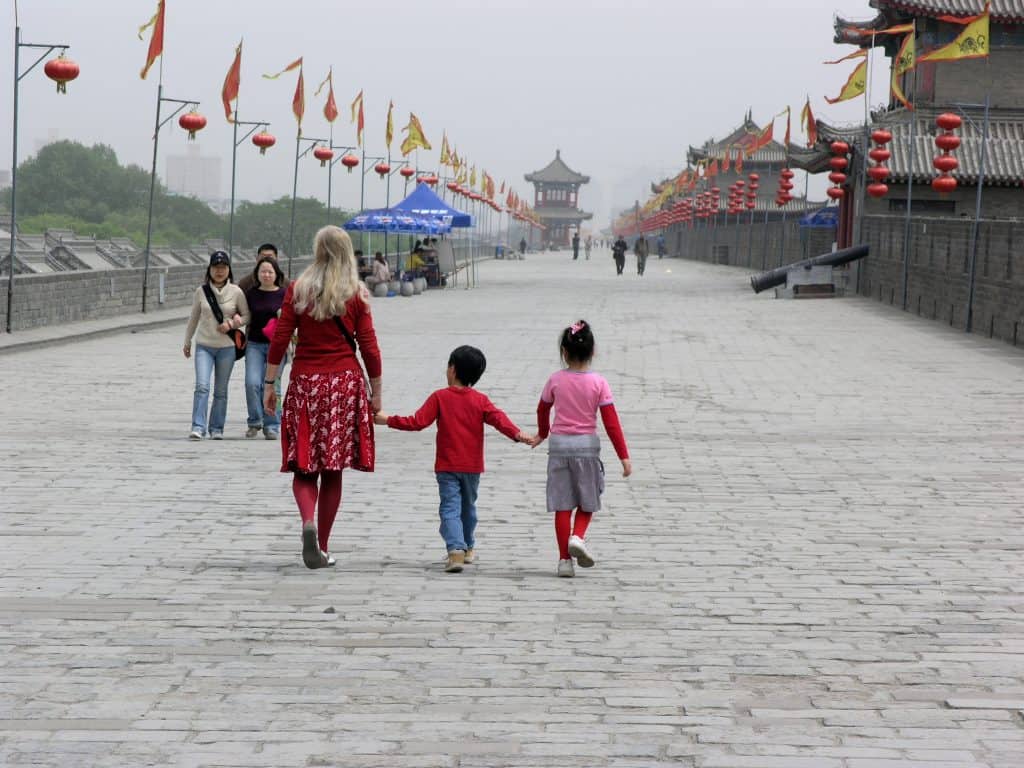 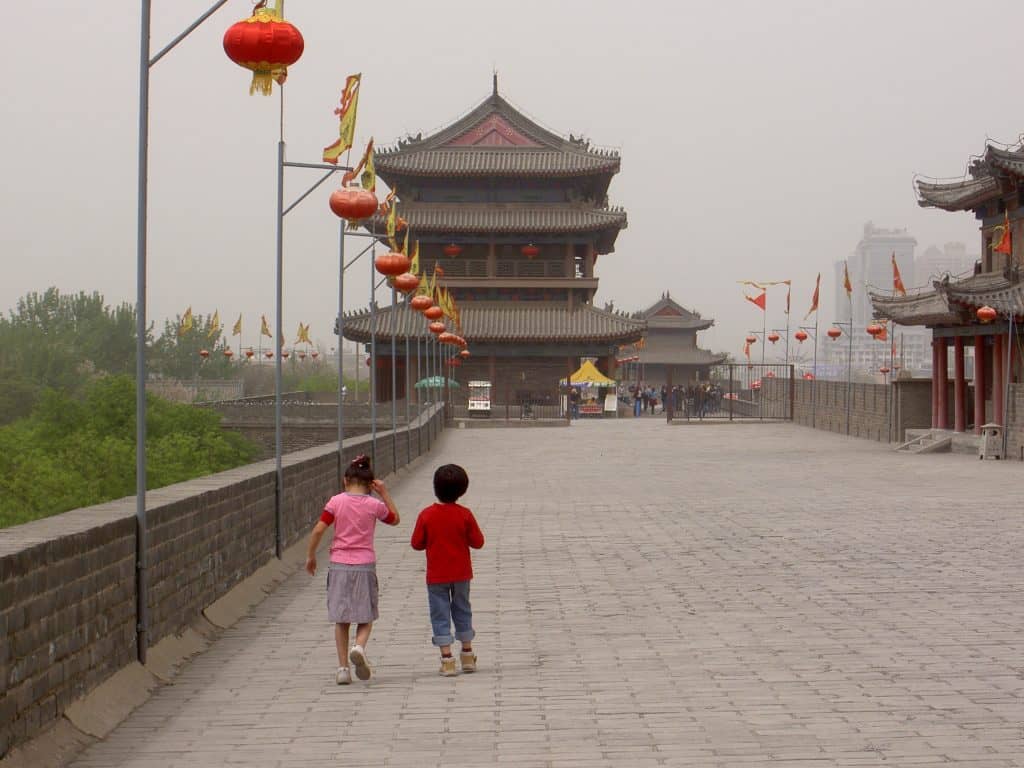 In China, children under 1m20 go free. Yanmei is taller than Daji, and Daji is just below 1m20, but everywhere we visited they let Yanmei go in for free – this was the only place we had to buy a ticket for Yanmei. We never really sure what this sign actually meant – perhaps don’t walk on the wall in rain? 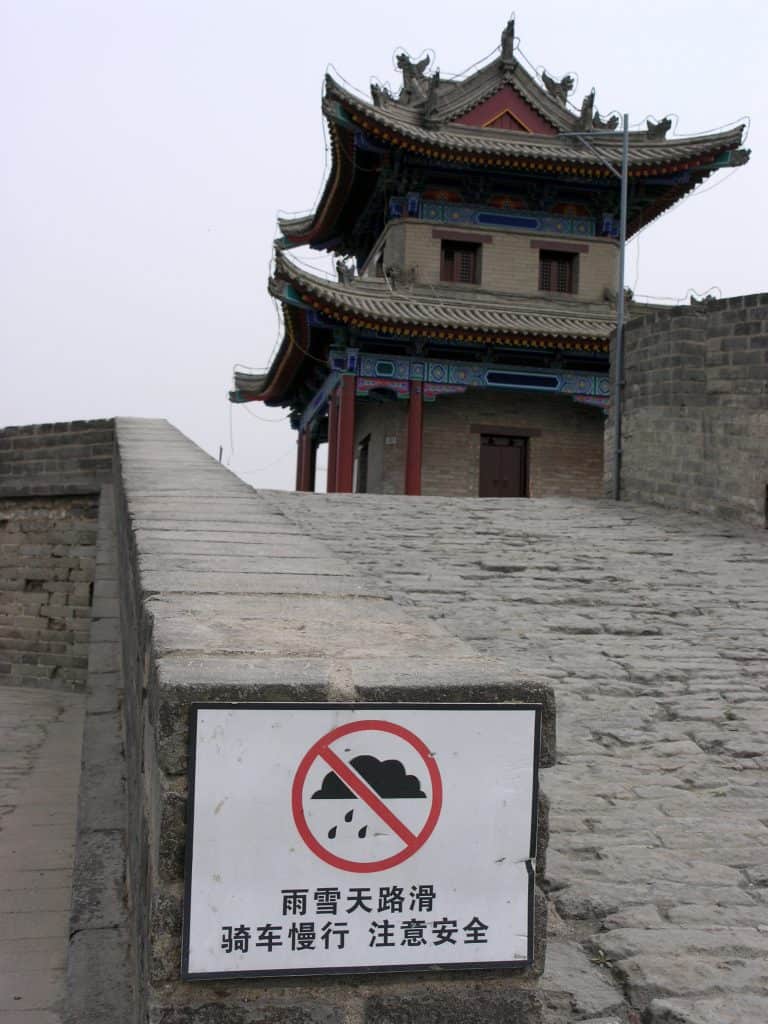 We walked back into town, bought ice creams, shoes for Lene, CD’s for Steven and ended up in the centre of town. Xian has a mural depicting the history of Xian and China up to today. The mural is about 150 meters long and Daji was very interested. 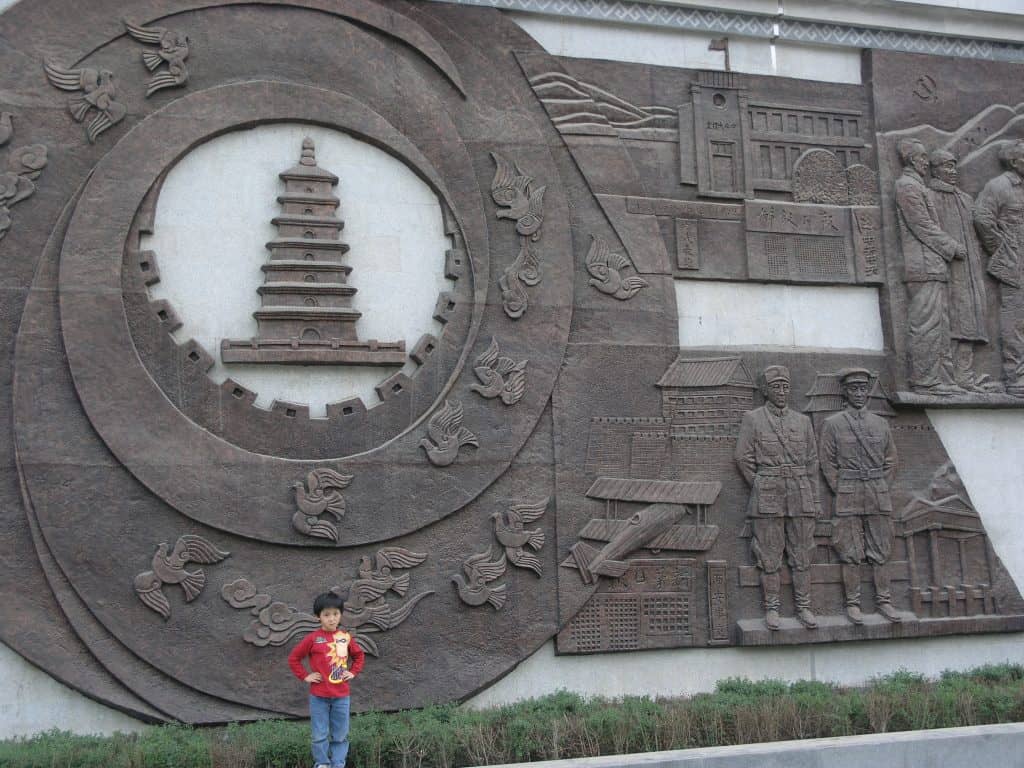 We ended up in the Muslim quarter, which was even more packed than when we visited a couple of days earlier. Daji bought himself a Chinese hat with a pony tail. Seeing all the restaurants and food made us feel hungry, we hadn’t eaten anything substantial since breakfast, so we decided to take a chance and entered a large restaurant, which then was half ful,l but within 15 minutes was packed with some tourists and many Chinese. Again the food was good, not least the grilled lamb and people friendly and the whole meal cost less than 100 RMB. 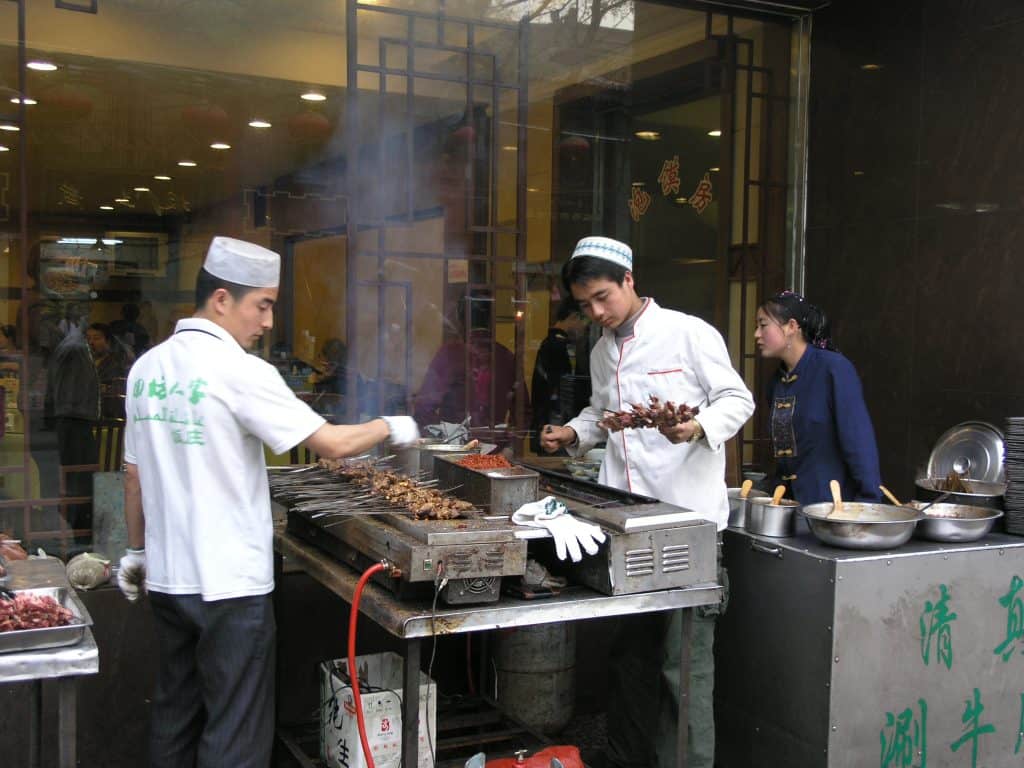 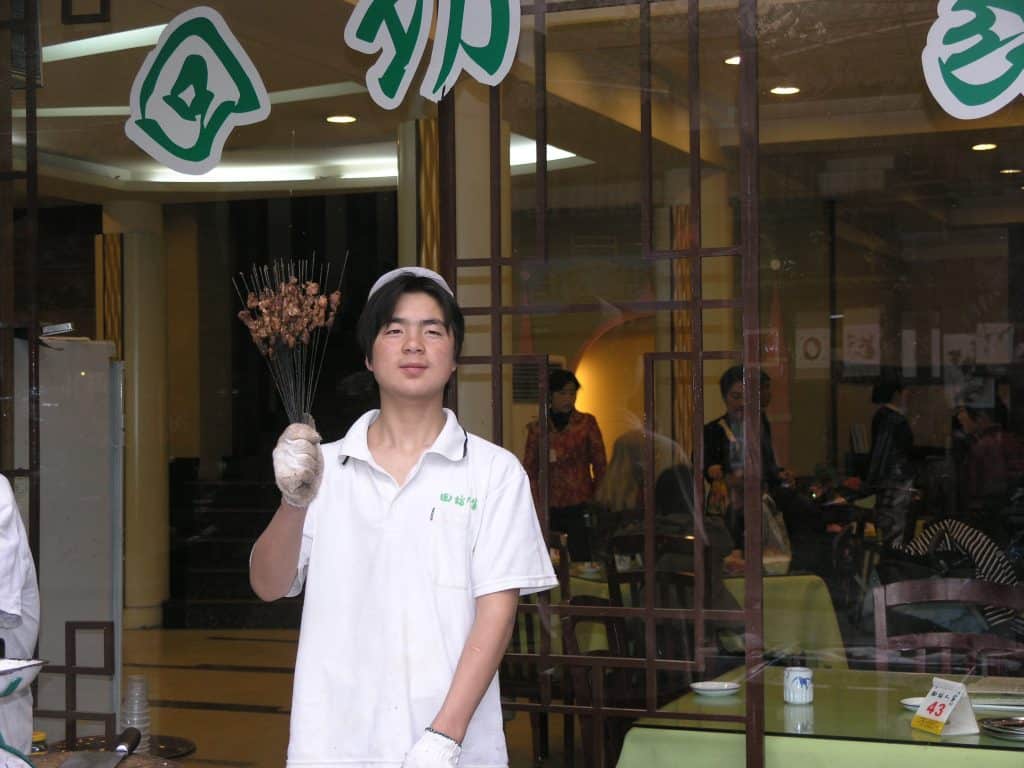 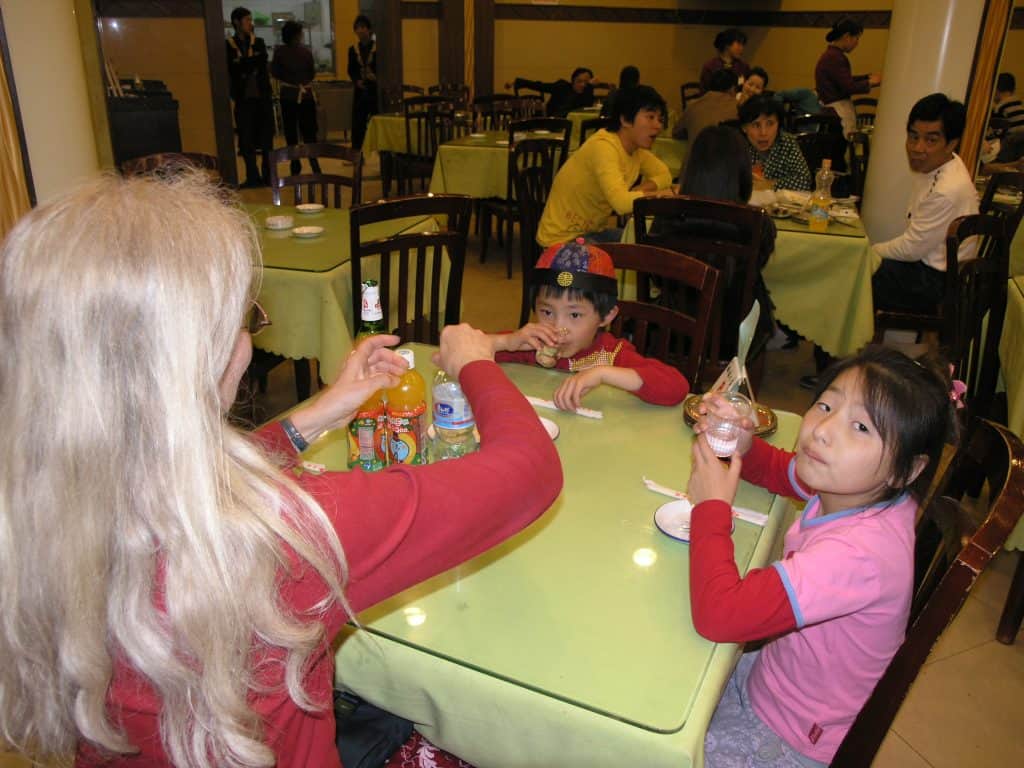 We took coffee on the way back to the hotel (a couple of coffee cost almost as much as half the meal!) and watched as people as they gathered on the squares, talking, skateboarding, flying kites or just out for a stroll to the see the nightlife. Our train to Lanzhou wasn’t until 22:32 so we had time to wander around before leaving for the station. 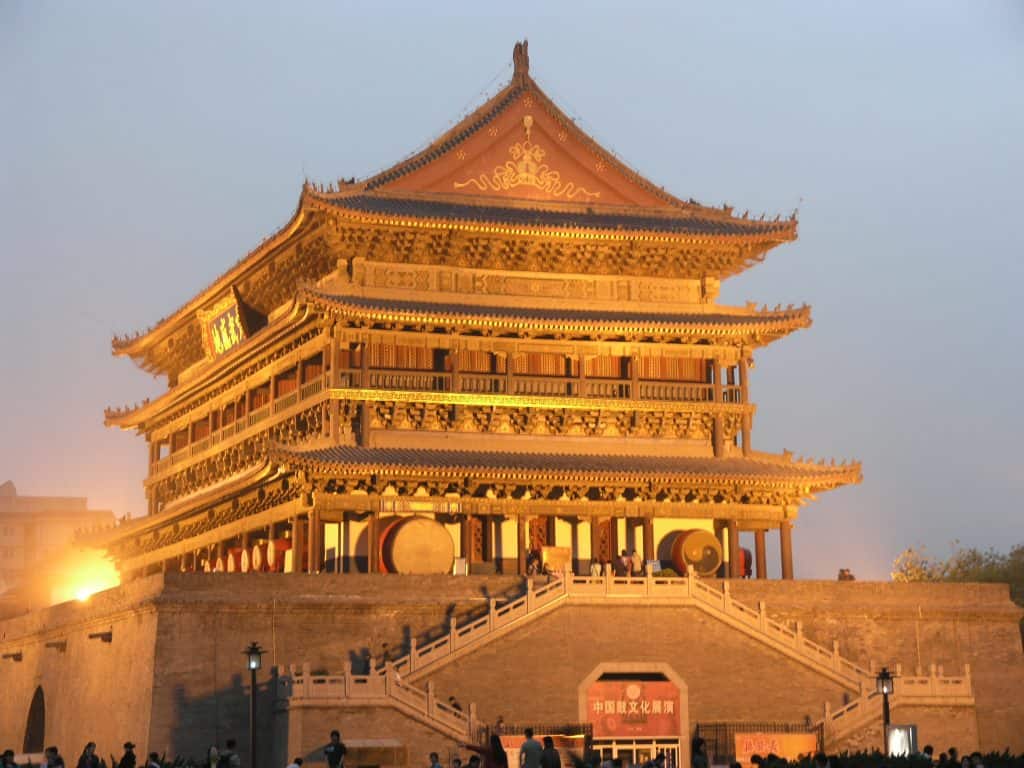 Around 9pm the hotel helped us get a taxi, but the driver wouldn’t, for some reason take us all the way to the station. He dropped us off about 400m from the station – just in front of some people who wanted to carry our luggage. Wary of giving our luggage to anybody, we managed to get it to the station, through the security check and into the waiting room – hot and tired, but without any problems. 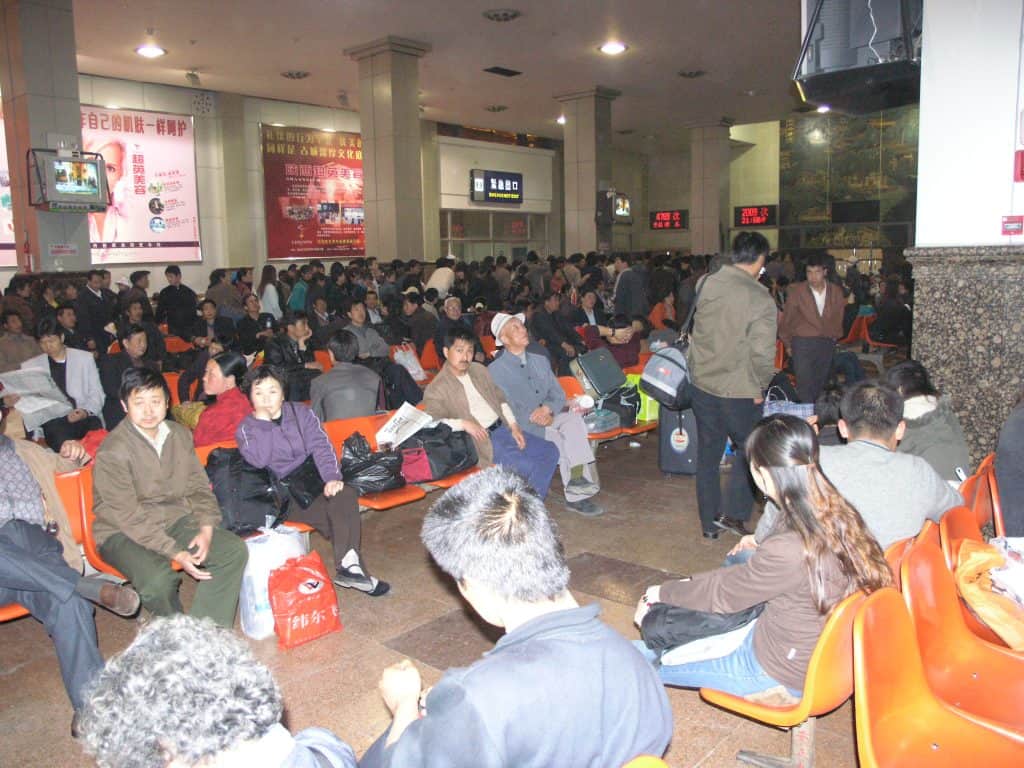 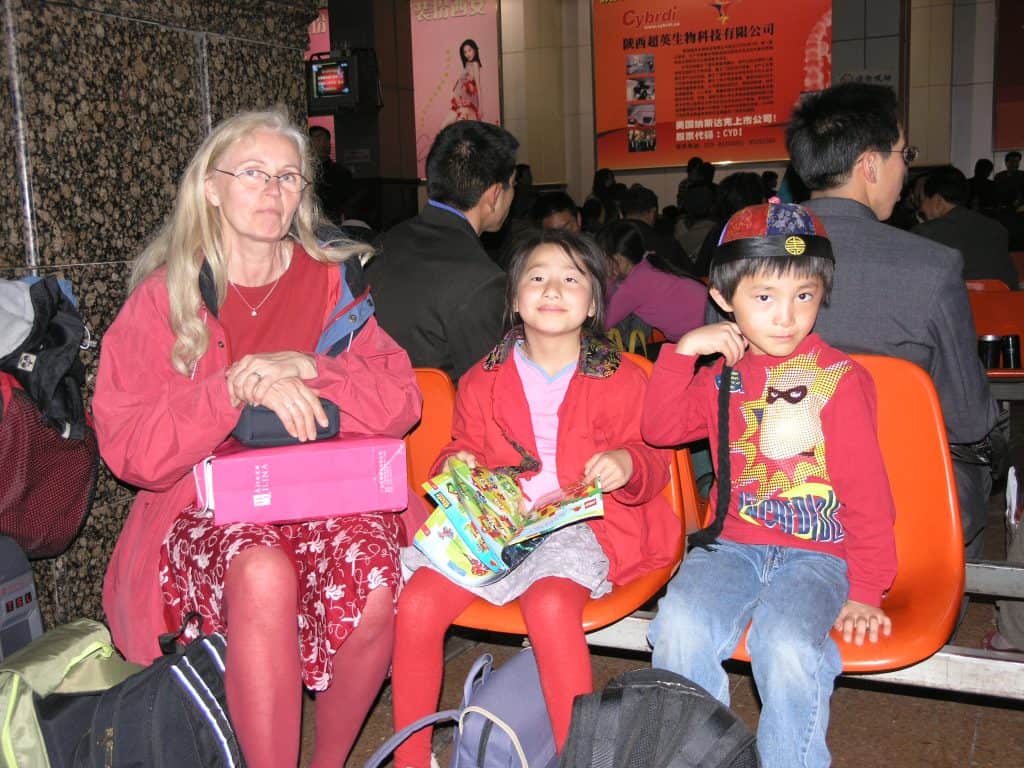 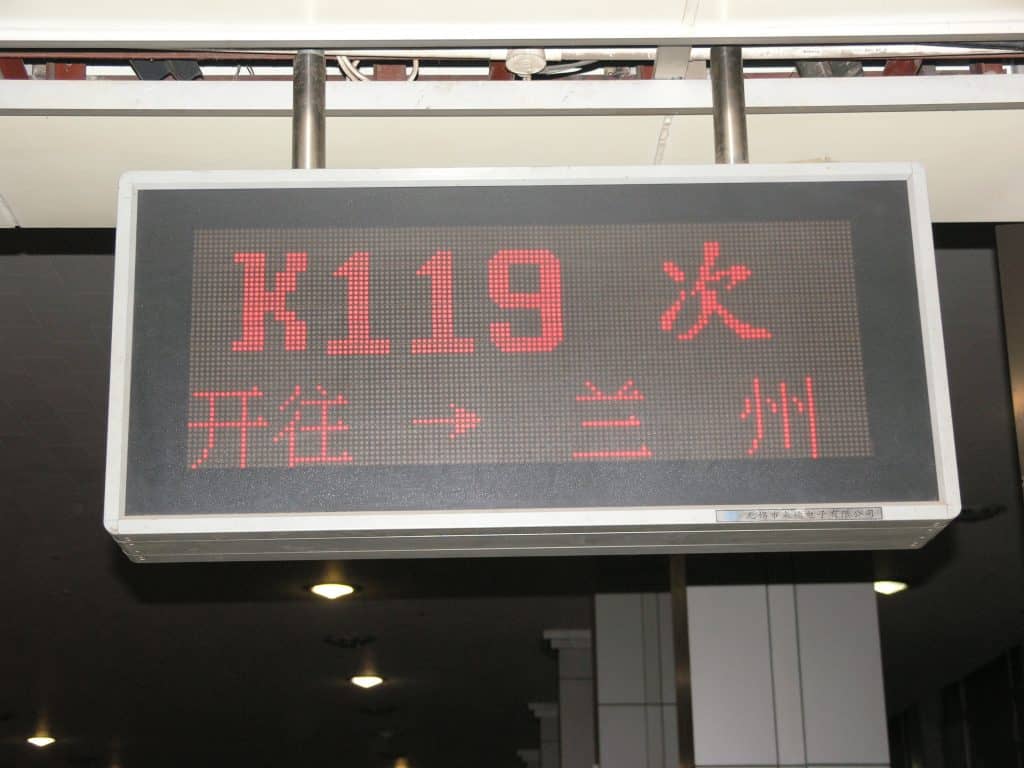 The waiting room was packed and we generated a lot of attention, a few people coming asking questions, others sitting close by and taking pictures with their mobile phones. The train was called about 15 minutes before departure and somehow we managed to get our luggage through the crowds, up and down flights of stairs and onto the train. The train carriages were older than the ones from Beijing to Xian and no TV, but it didn’t really matter, we all slept as soon as the train had left the station.