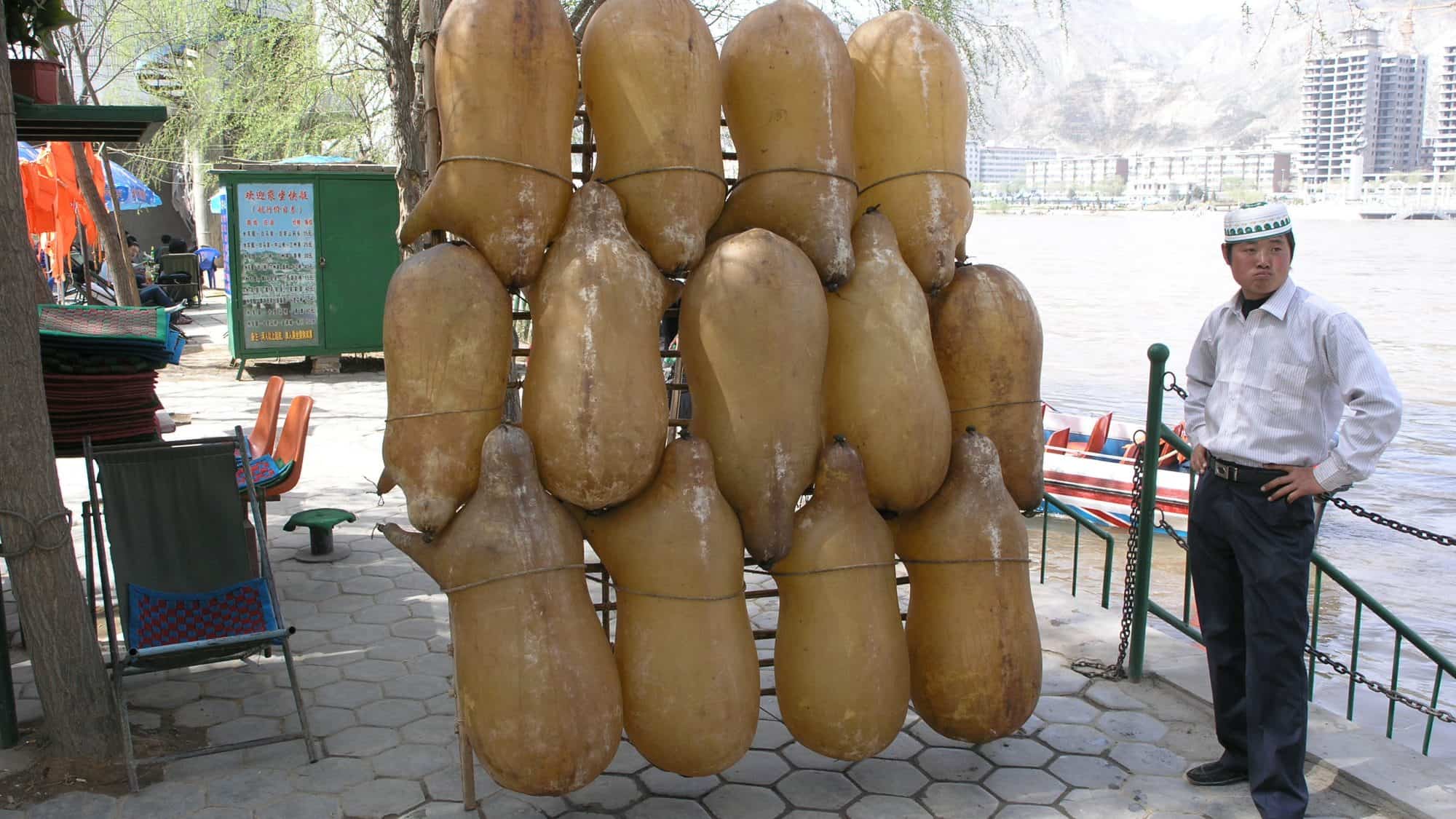 We arrived at Lanzhou a few minutes early and lugged our luggage onto the platform and waited for the other passengers to pass us before making our way down the stairs to the exit. The train had stopped at seven stations underway, but it wasn’t anything we noticed as we all slept until about an hour before planned arrival at 07:13. Outside the station there was chaos, buses, cars and taxis everywhere, which was due to the road being blocked just past the station so all traffic had to leave the station in the same direction. 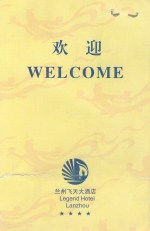 The taxi took us the 2-3km to our hotel, the Lanzhou Legend – the same hotel we stayed in when we collected Yanmei and checked into room 1120 – the same room we stayed in 6 years earlier. The furniture was the same, but it had been redecorated. We eat some fruit and biscuits and took a shower and watched the traffic pass by on the intersection below – there was walk-over now, so you didn’t have to risk your life crossing the road, as we felt was the case in 2000.

We took the short trip to the Yellow Building, the supermarket 100m from the hotel, to buy something for lunch. The supermarket was well assorted, not least with vegetables and fruit but also had a bakery and area where 5-6 men were making Chinese delicacies. Back at the hotel we ran into two other families with Chinese children. It transpired that they were from Canada (although one of the families was Dutch living in Canada) and they were due to adopt little girls from Wuwei, Gansu later the same afternoon. We wished them the best of luck and went to eat “brunch”, consisting primarily of yoghurt, bread and cakes.

We walked towards the main square. It was sunny and warm and a lot of people were on the streets. The square was packed with families and Yanmei and Daji immediately saw the exercise ground. The large department store that was on the square, Parkson, had closed down. We walked through the square and enjoyed watching the families out with their children and grandchildren (often 6 adults per child). Lanzhou seemed a lot cleaner than six years ago, no rubbish on the streets and a lot more people out and about.

We took a taxi and headed to the Zhongshan Bridge – the first bridge over the Yellow River. The iron bridge was started in 1907 and completed two years later. All materials, even the rivets, were transported from Germany to China using ships, trains, carts and any other means possible. The bridge was completed in two years, and named the ‘Lanzhou Iron Bridge over the Yellow River’. In 1942, to commemorate Dr. Sun Yat-sen, the bridge was re-named Zhongshan Bridge (Zhongshan is the Chinese name of Dr. Sun Yat-sen). Dr. Sun Yat-Sen was married to Soong Chi-ling, whose former residence we had visited whilst in Beijing (on the 9th). The bridge was taken out of service in 1989, and now is only used to walk across the Yellow River. 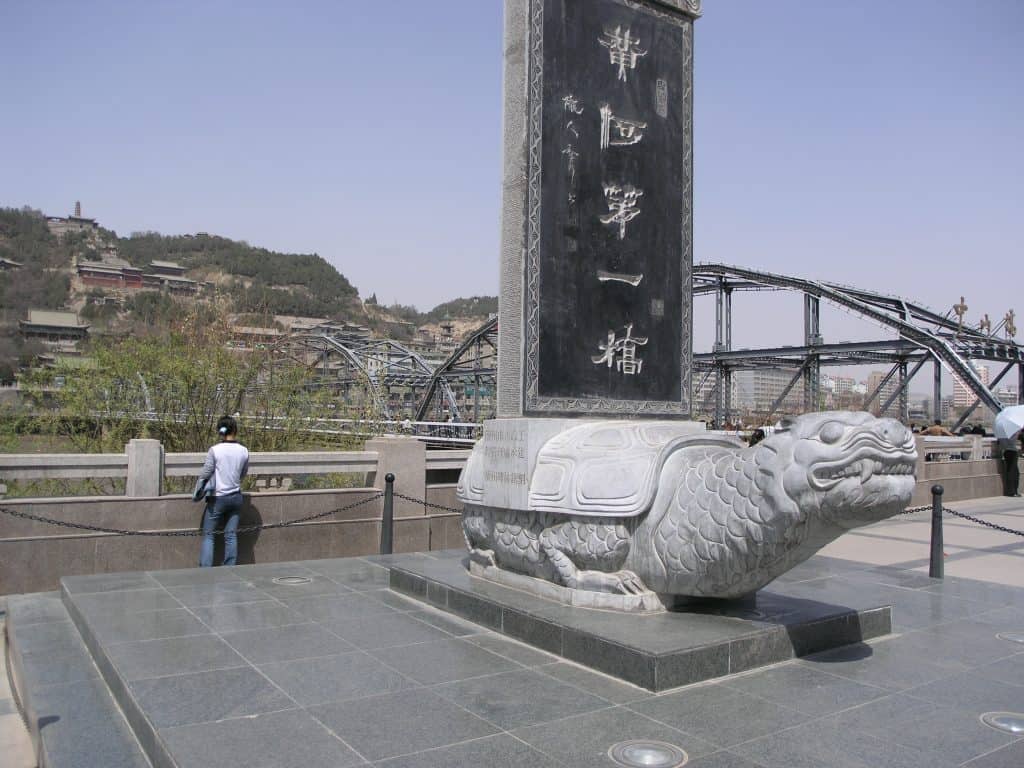 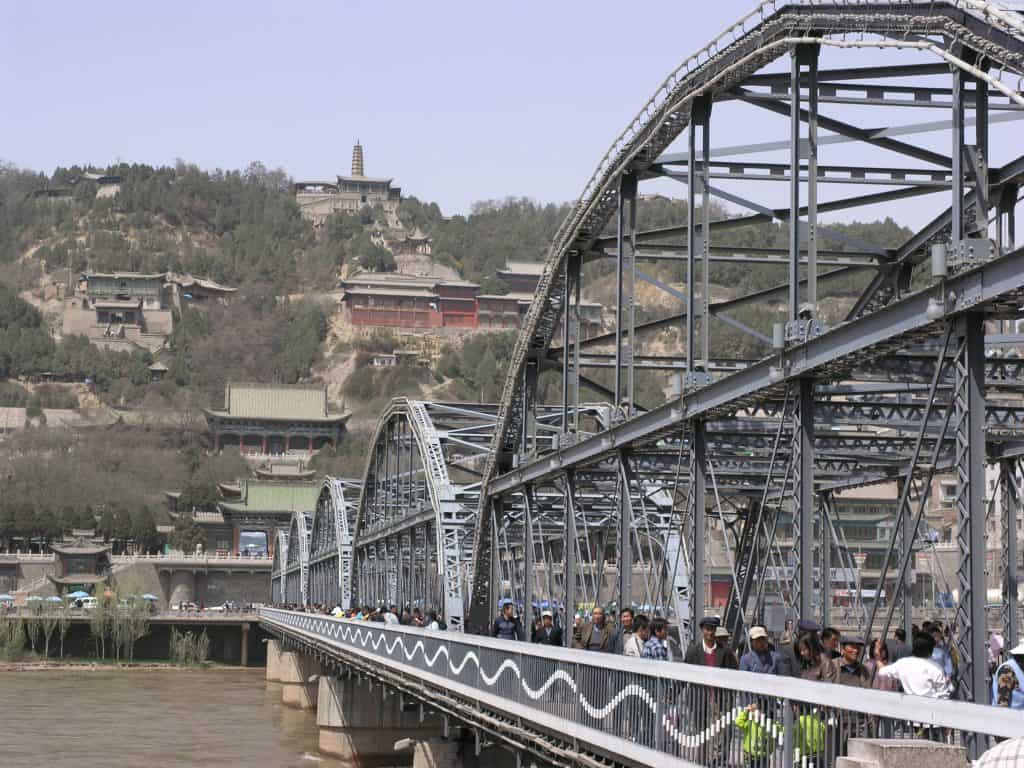 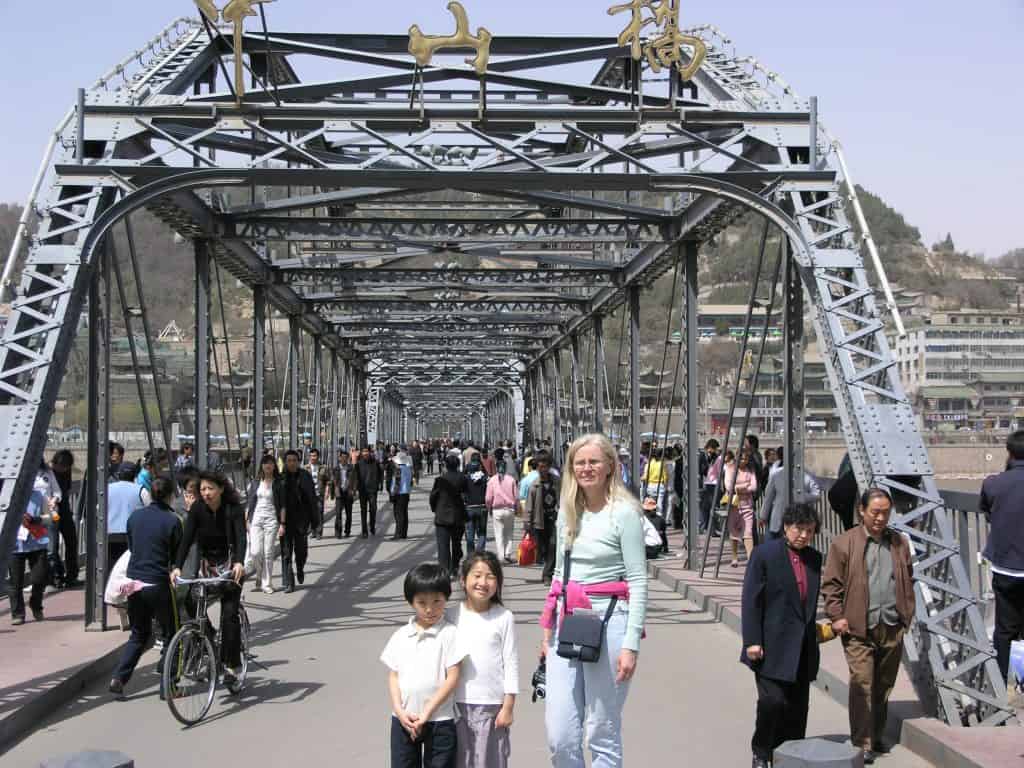 We walked along the river together with many other Lanzhou families. We bought ice cream and sat down and watched the children fly their kites. 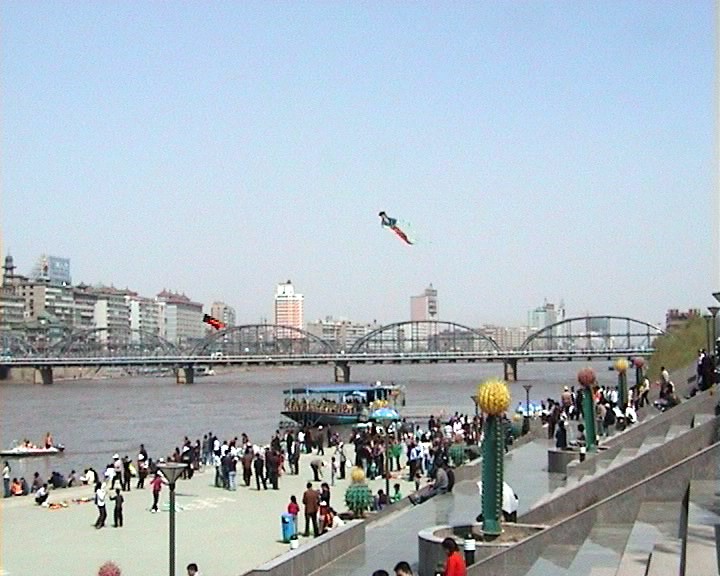 We continued along the river finally arriving at the Waterwheel Park. Hundreds of waterwheels have been built along the Yellow River over the centuries. In 1556 a retired general perfected the design of a waterwheel that could lift water some 10 meters and irrigate the land around. Today only 3 still work in Gansu, but the Lanzhou authorities have created a park where large and small wheels, based on the original design are on show, the larger wheels pulling water up, and the smaller operating grinding and milling equipment. 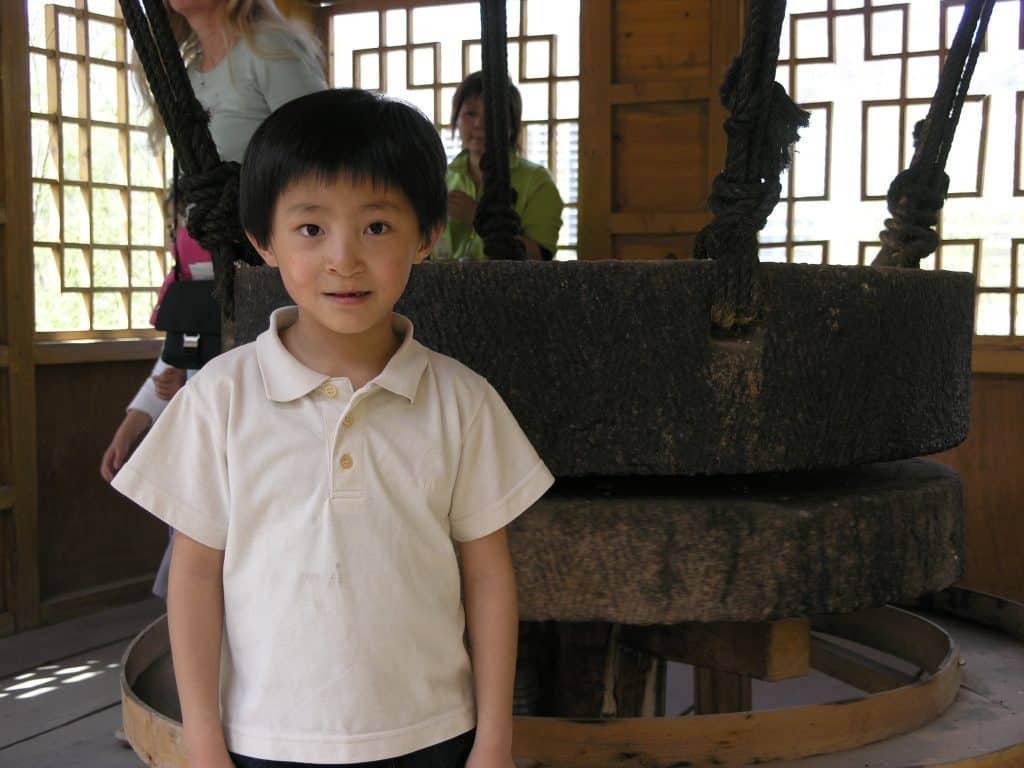 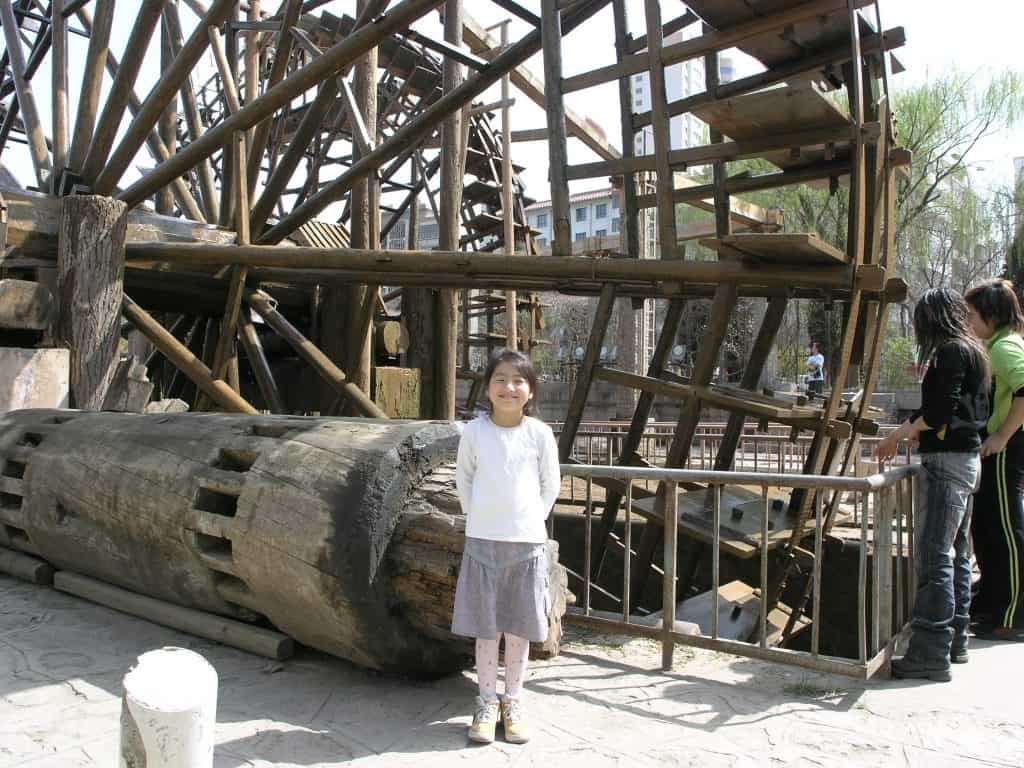 The park is very significant for us, it was here that Yanmei smiled and laughed for the very first time (with us), 36 hours after we had first received her. Steven had thrown her up in the air for no particular reason, first she smiled and then laughed each time she was thrown into the air. From that day she truly belonged to our family. 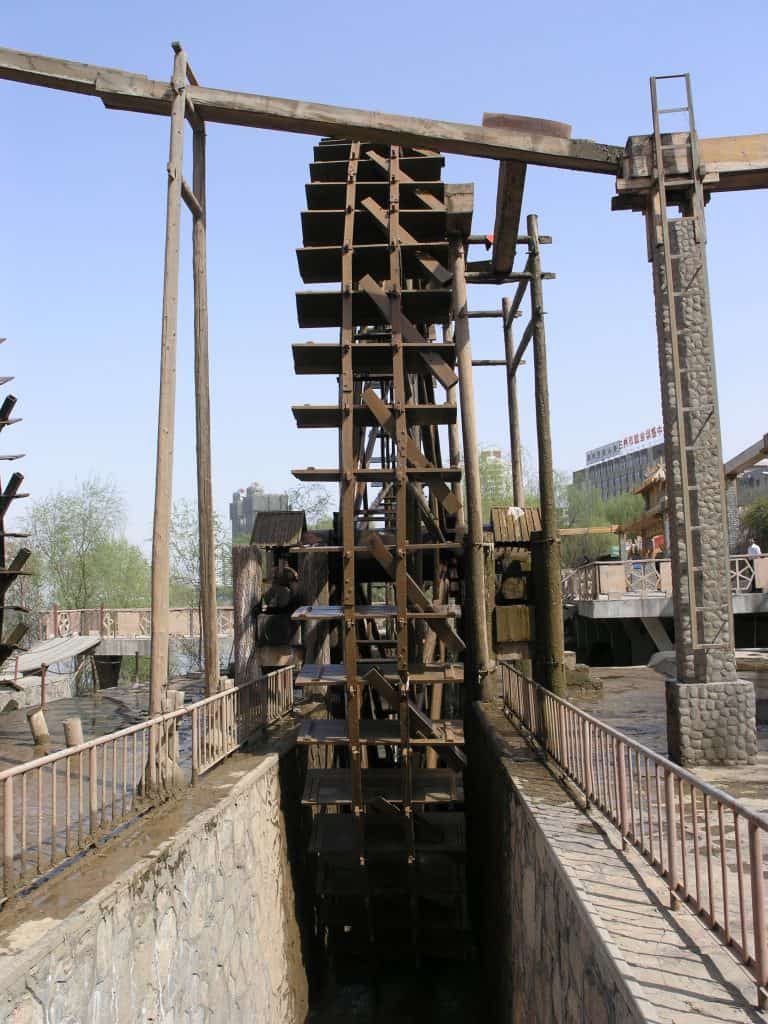 Just outside the park we saw some of the traditional rafts usually made of sheep or cow skin. The whole skins of sheep or cows are peeled off and depilated with salt water (a process which eliminates unwanted hair). The four limbs and the neck are dipped into the oil to make them softer and then all the openings are bound up with strings. Only a small hole is left to blow the air in. Wood blocks are used to tie the “skin bags” together, thus finishing a leather raft (see picture below). You can actually sail along the river on these, a practice the Chinese authorities want to stop as it is considered too dangerous. 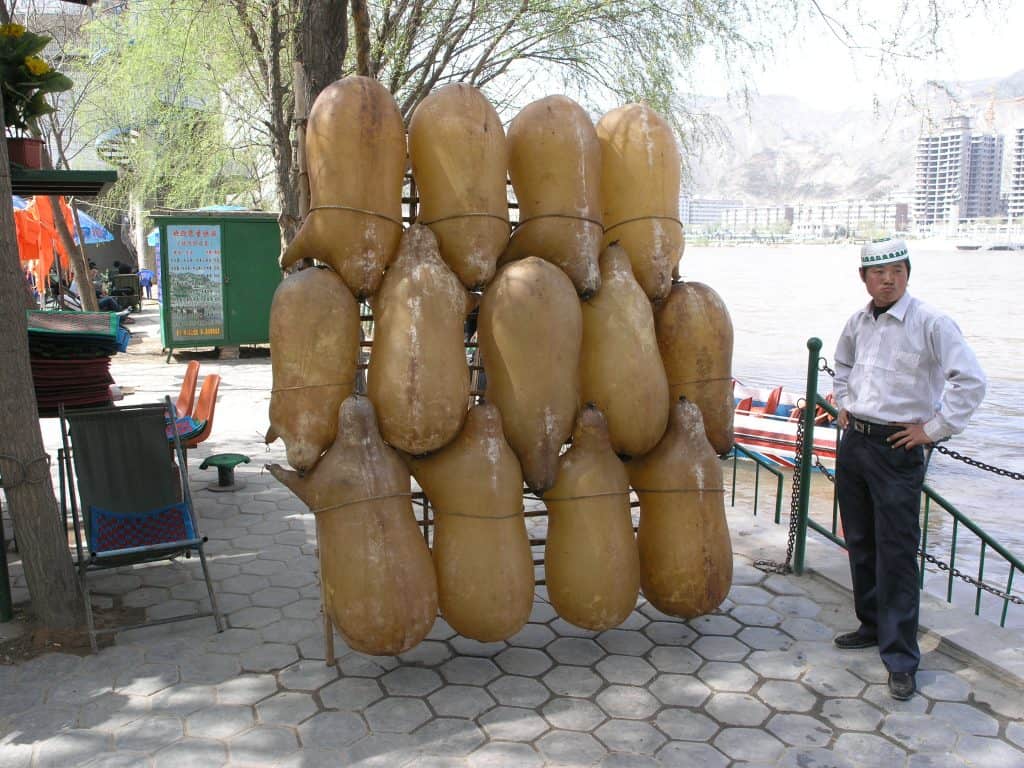 We continued along the river to the Mother of the Yellow River Sculpture where families have pictures taken with their babies. 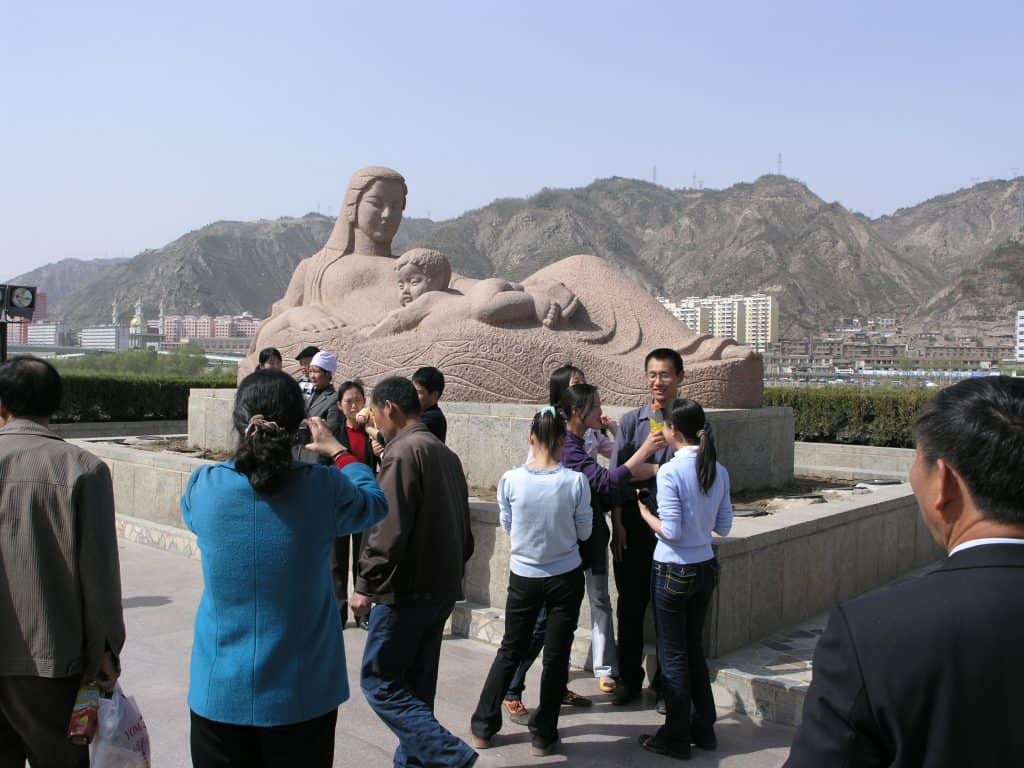 We crossed the road into a local park, with a small lake and tivoli – Yanmei and Daji taking a trip on a small roller coaster, with Daji hand on head in the last picture.

Lots of families were spending their Sunday afternoon with their children and grandchildren or playing cards. As always in Chinese parks, or so it seems, there was also a couple posing for their wedding pictures in front of the lake. There was even an area in the park set aside for the most romantic pictures! 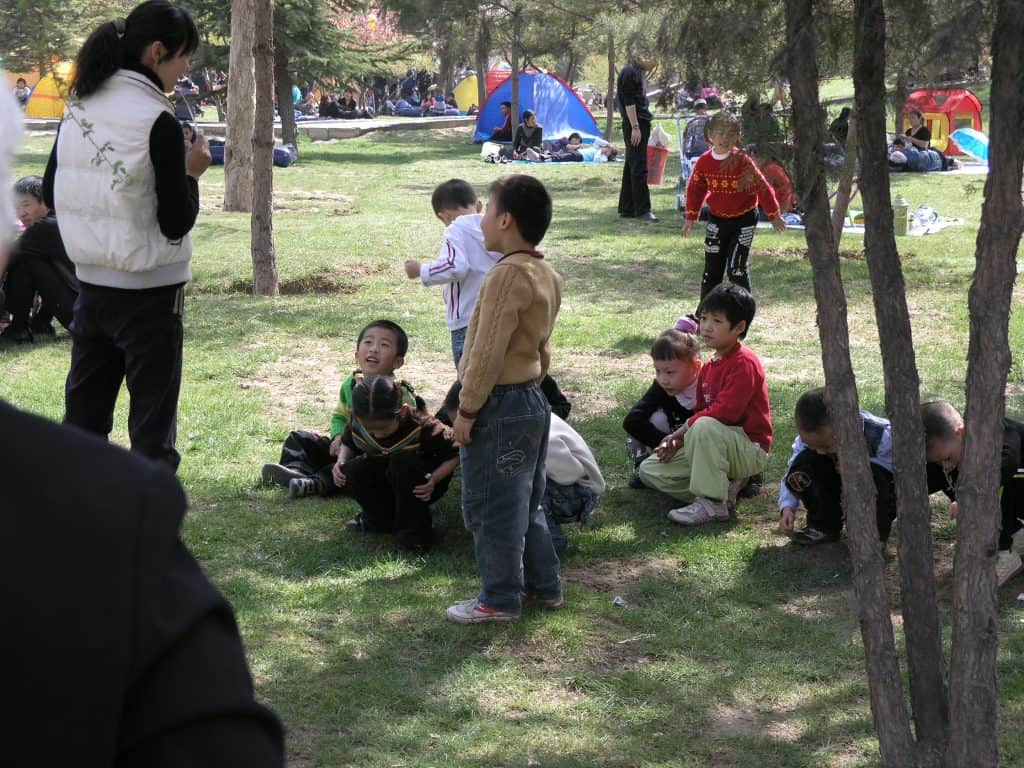 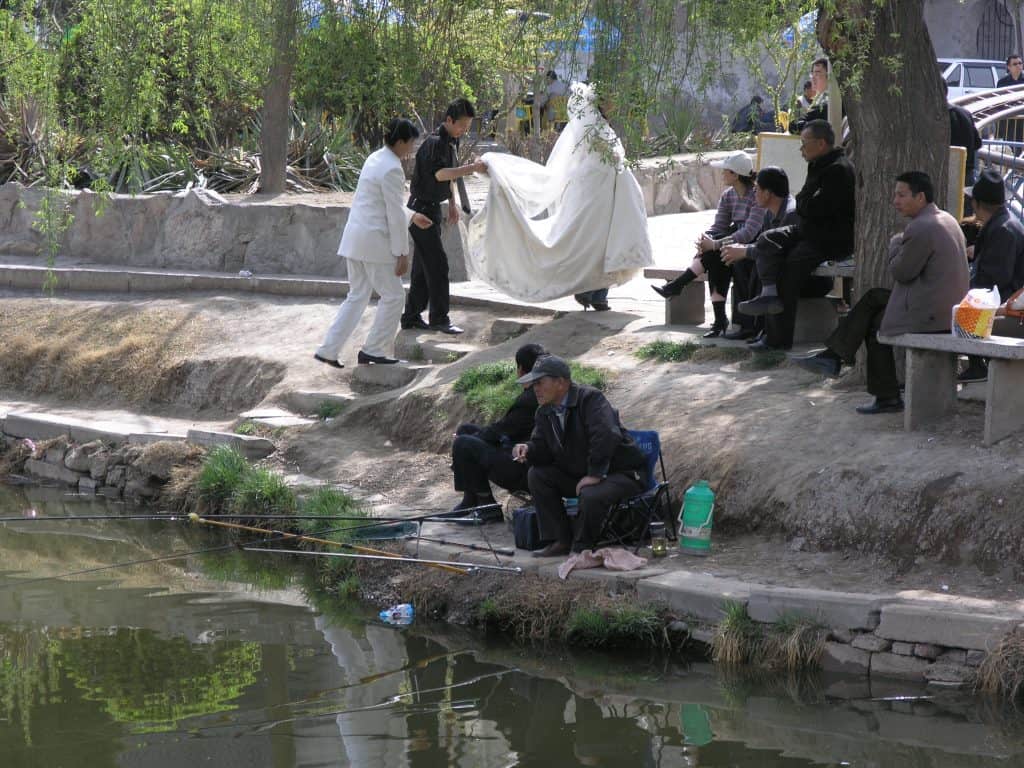 We left the park and took a taxi back to the hotel. Steven went out for a walk to spot a place to eat in the evening – last time we’d been guided around, so this would be new.

We decided to try the restaurant next to the hotel. There were 6 “girls” dressed up in Chinese traditional costume to greet us, and they assured us that there was an English menu. They showed us to a table in a half full restaurant, in what seemed, by our previous experience of Lanzhou standards, a very posh restaurant with a large aquarium and water tanks where you could select the fish you wanted to eat. There were many waitresses and the head waiter was fitted with a microphone to be able to communicate with the kitchen about the courses they had and didn’t have that day. The English menu was produced, without any prices. The waiter assured us that it was cheap! We selected 4 or 5 dishes from the menu and added rice and noodles. Some of the dishes on the menu were not available and whilst the head waiter spoke some English, he understood very little. With a few smiles, sign language and English we managed to order without any problems. The food was excellent, the service likewise. What surprised us though was the noise in the restaurant – at least one large table of men were playing some kind of drinking game and making lots of noise. Nobody seemed to care, in Denmark many would have complained if it happened in such a restaurant. We asked for the bill and were intrigued about how much the meal would cost us, guessing at somewhere between 200 and 300 RMB, based on the quality of food, service and the number of people that were working there. The bill came and was 80 RMB (10 USD) – we felt it must be a mistake, but didn’t seem to be the case! We left a 10RMB tip and left. Much to our surprise the waitress came running after us to return the tip, we didn’t accept and she seemed highly embarrassed, but happy. As we left the the restaurant the 6 girls lined up, 3 on each side of the door and sang as we left!