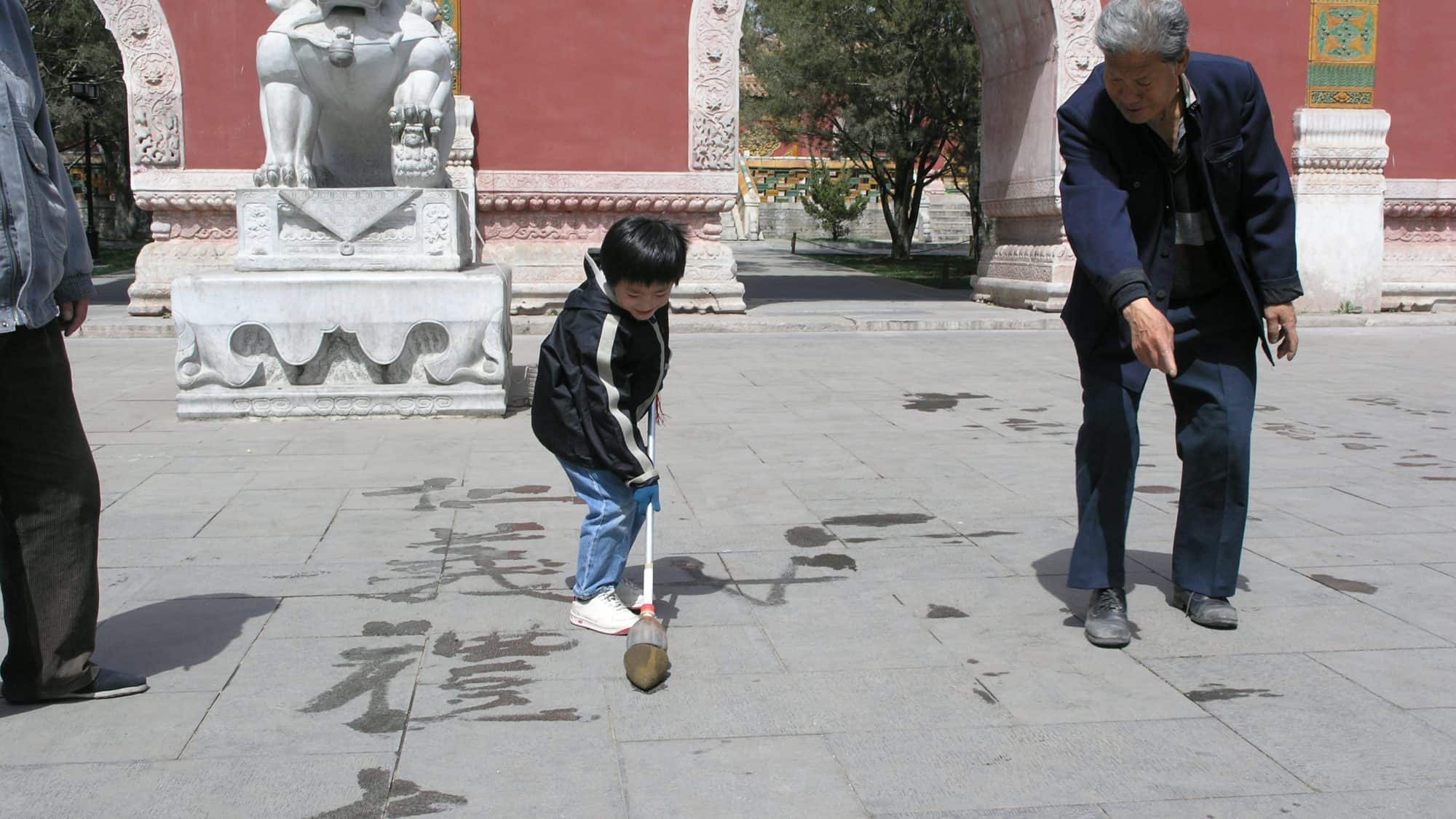 Today was our last day in Beijing for now. We will return in 10 days after visiting Xian and Lanzhou. We had been informed we could check out at 4pm, but after breakfast I checked, and after some discussion agreed on 2pm – and even checking out at 2pm the hotel tried to charge us for late check out. We packed and left for Beihai Park. This is the park we’d planned to visit on Sunday, but had missed the entrance.

The weather was beautiful but cold – it was still fairly early. We walked west along Wusi Dajie, past the north entrance to the Forbidden City with its watch tower and moat and on to the southern entrance of the park. 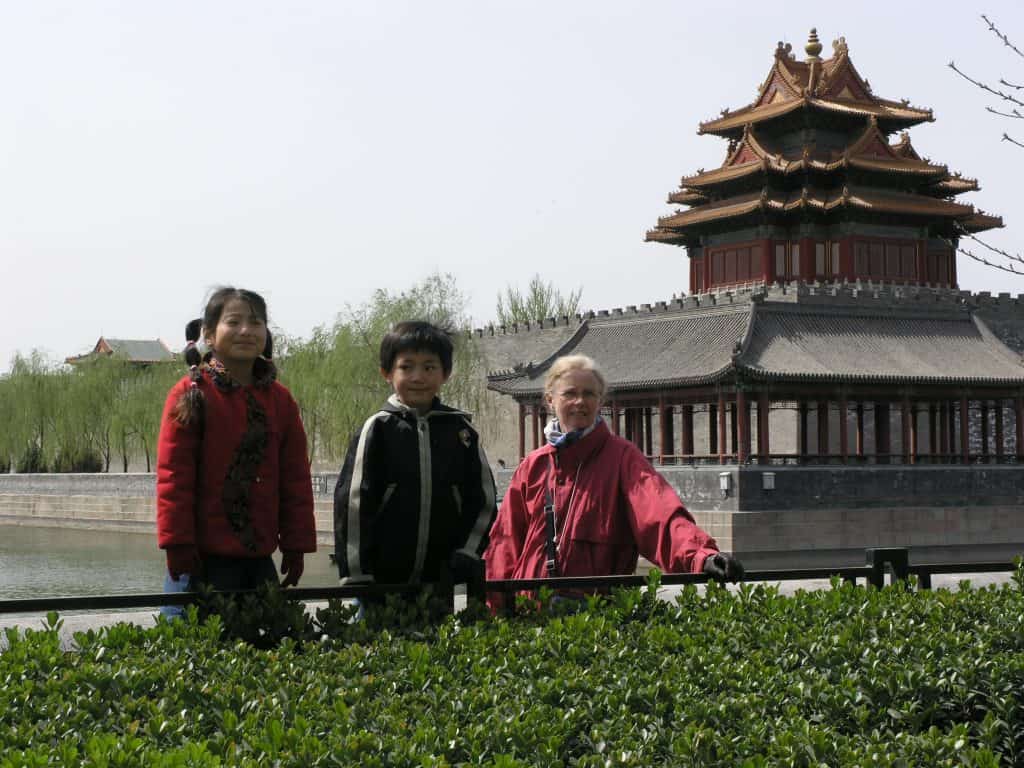 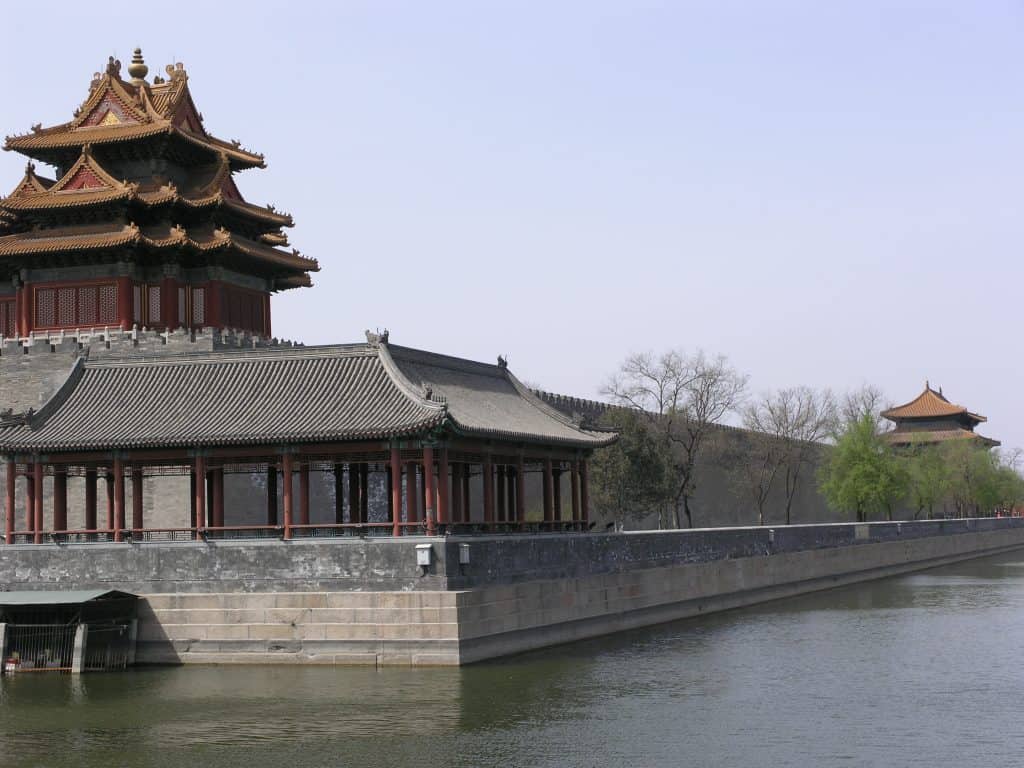 Apart from the dominating lake, the 36m White Dagoba built for the visit of the Dalai Lama is the main attraction, and what we’d come to see. Alas, yet again, renovation work foiled our plans, and we instead spent a pleasant morning walking through the park. 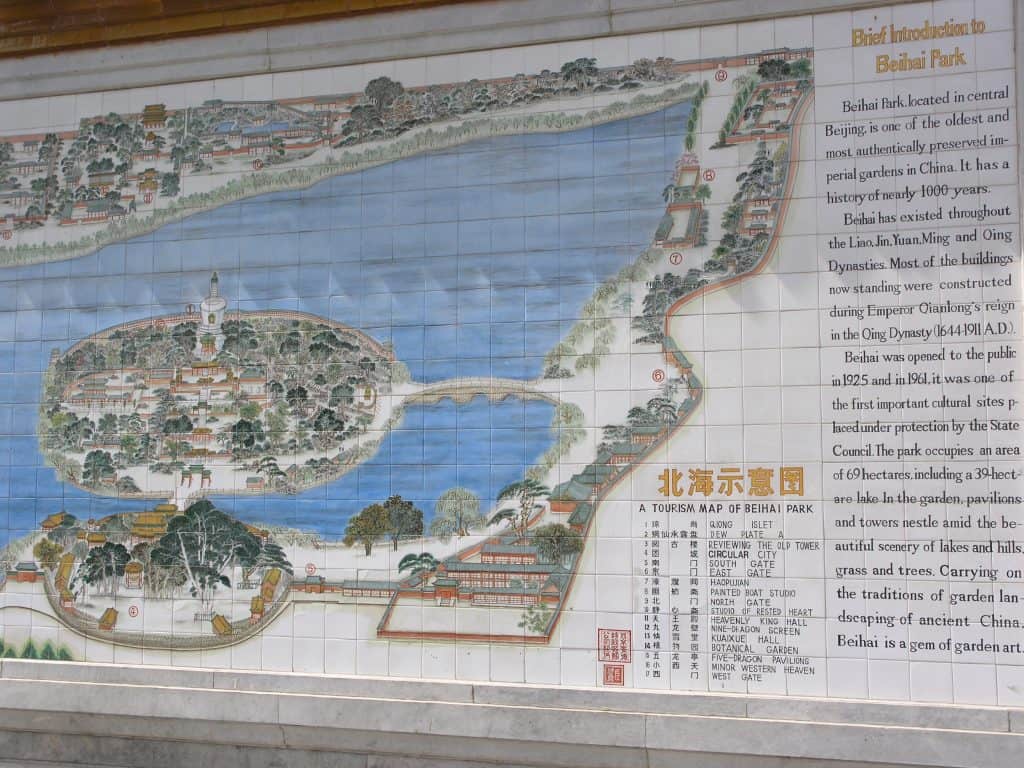 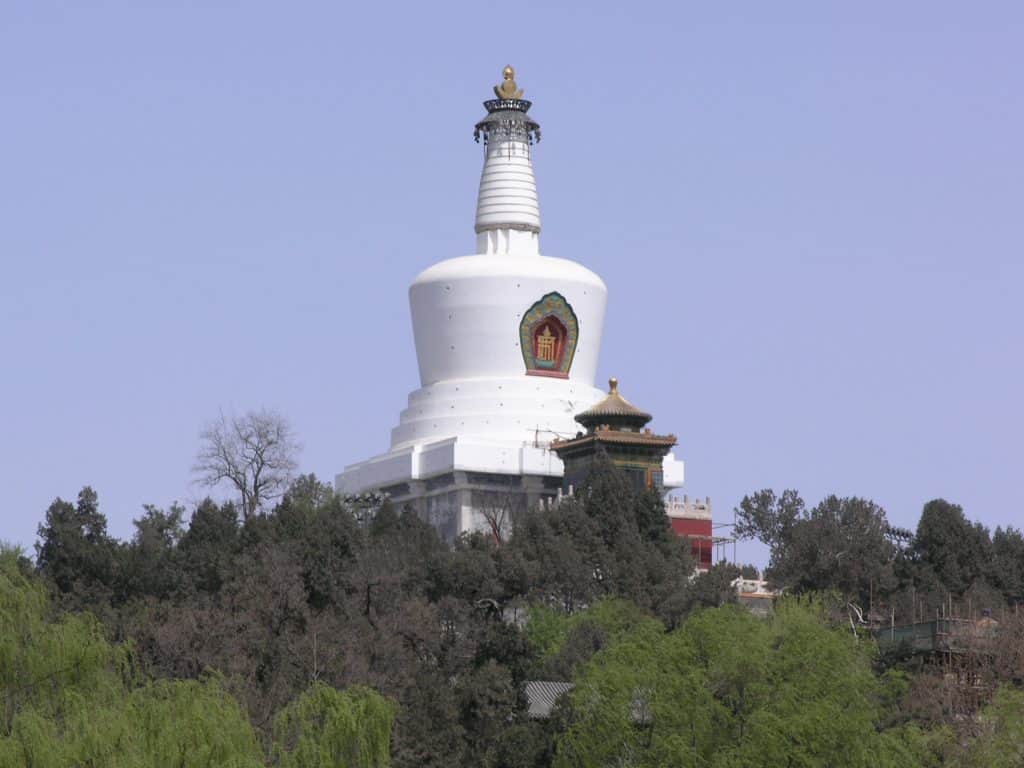 We took a paddle on the lake. Lene stayed on dry land, looking at water makes her feel sea sick. As the foot paddles were too far away from the seats for Yanmei and Daji to help, I had to paddle alone – 40 minutes later I was totally shattered. 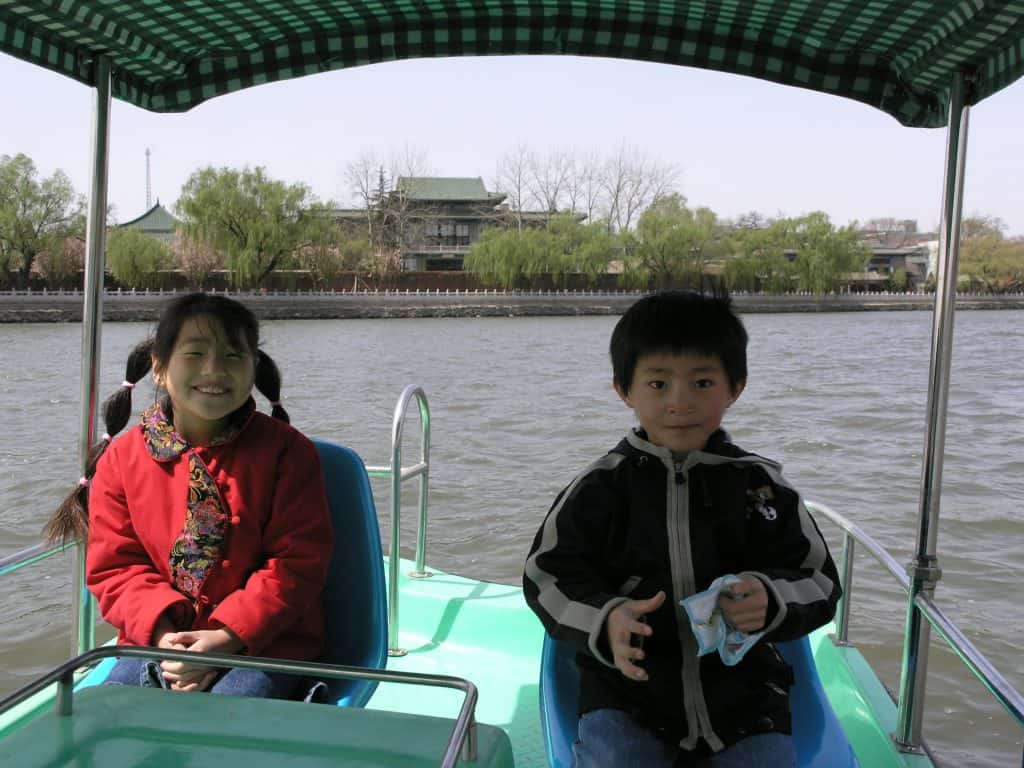 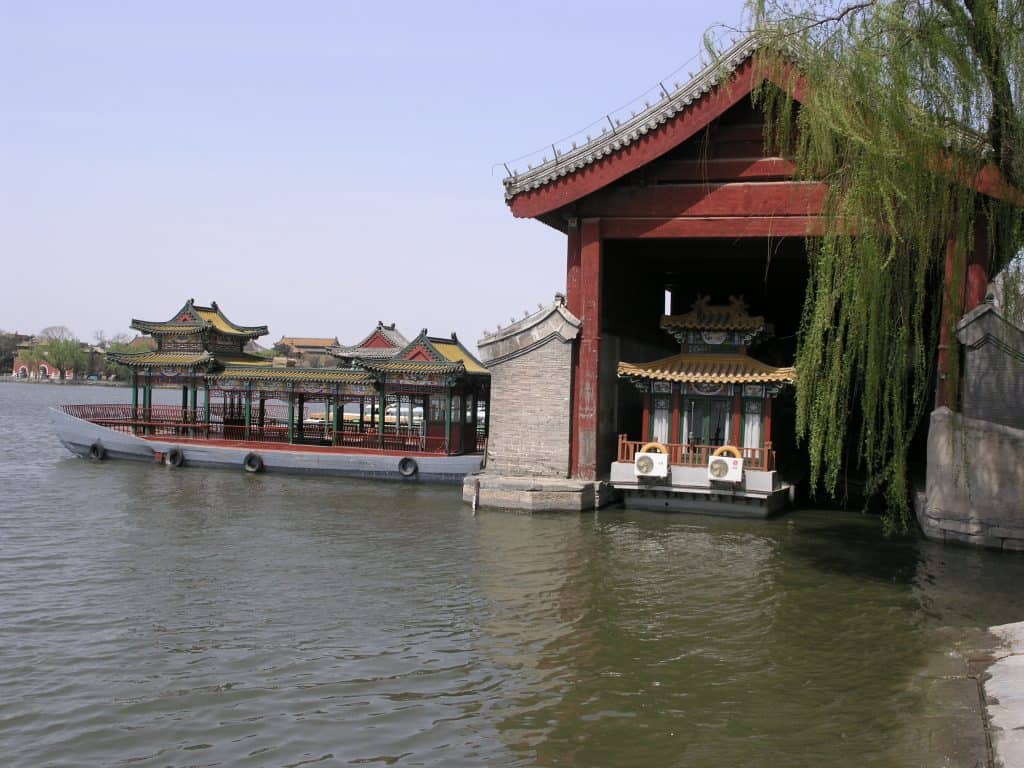 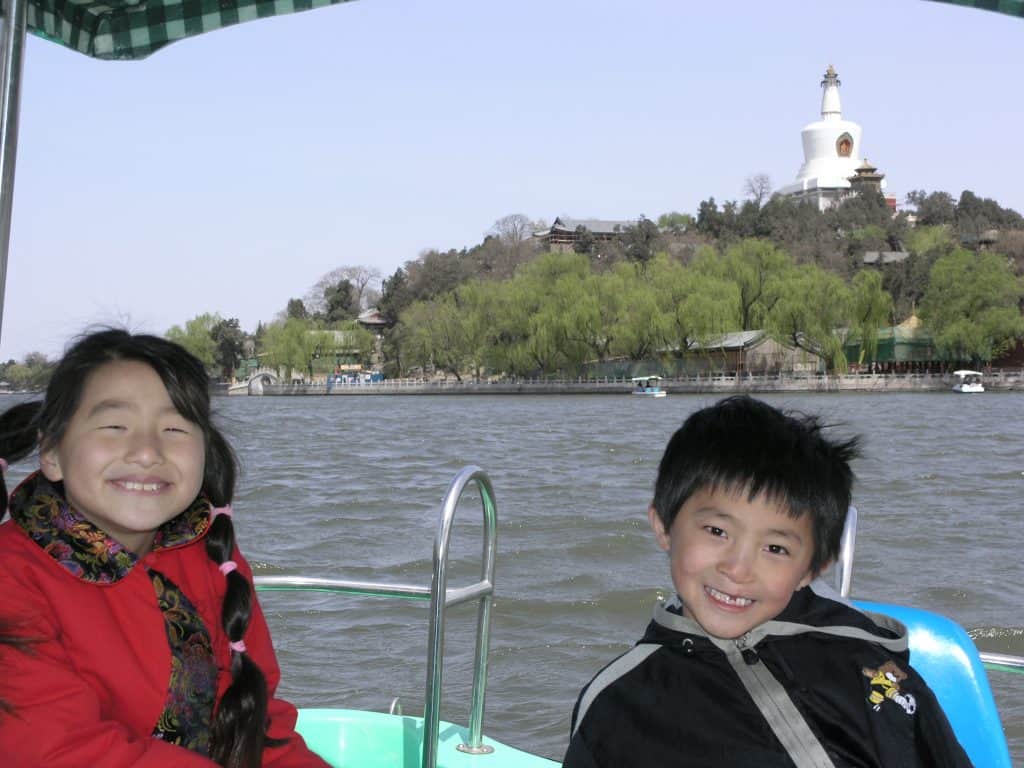 We also watched with interest as some Chinese men water painting Chinese calligraphy on the ground – which quickly disappeared in the sun. Daji and Yanmei were also allowed to try, much to their enjoyment and the on-watchers amusement. Daji wrote his own name, but backwards. 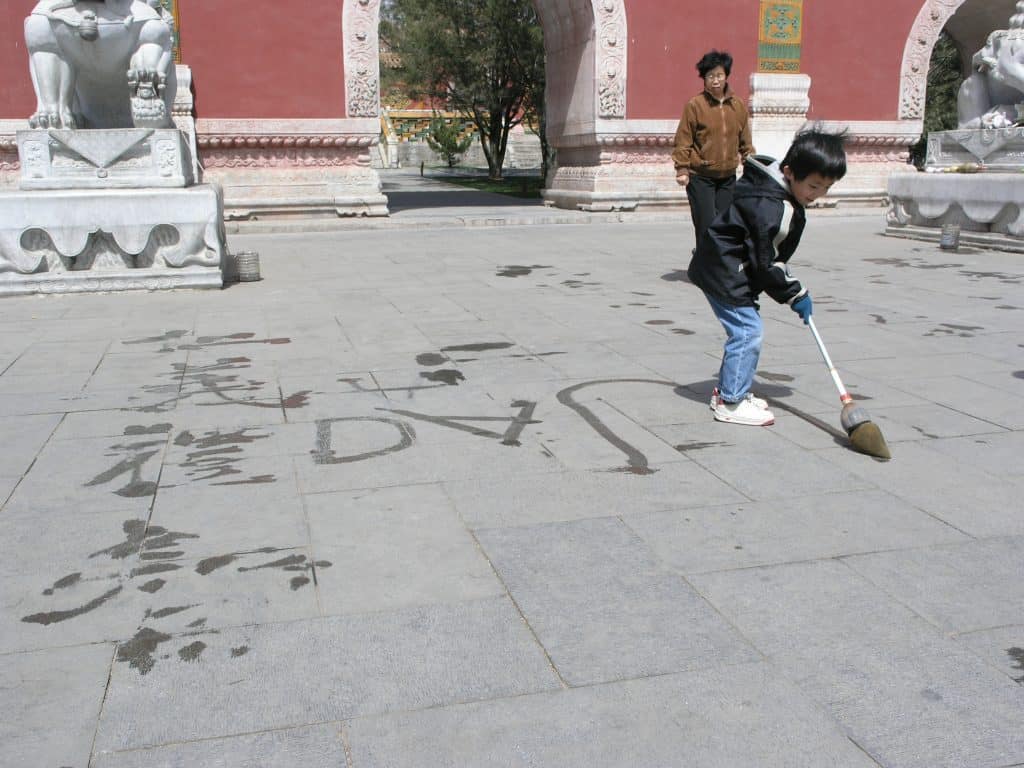 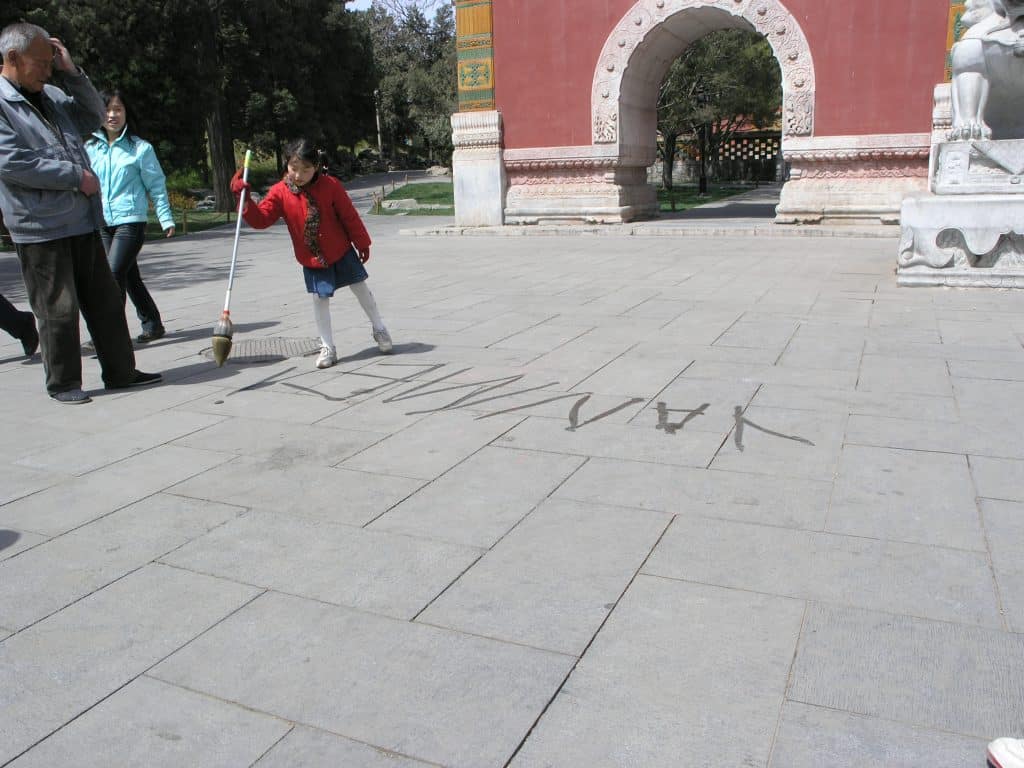 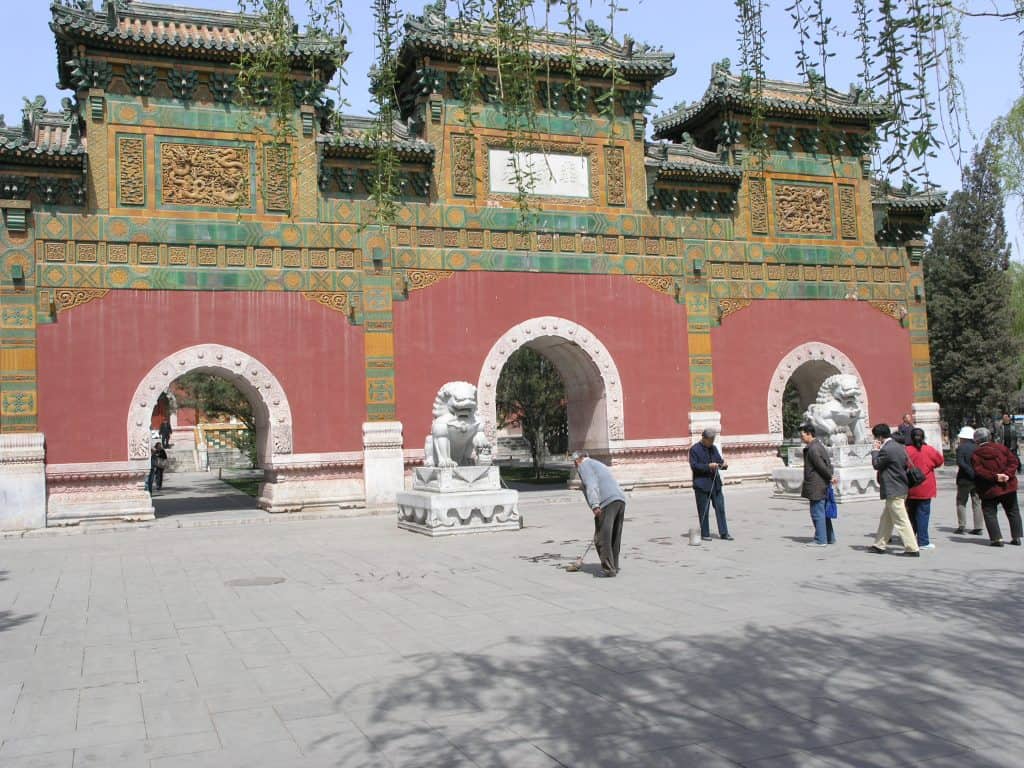 We were running late and took a taxi back to the hotel. We packed the last things and left a suitcase at the hotel for our return, 10 days later. 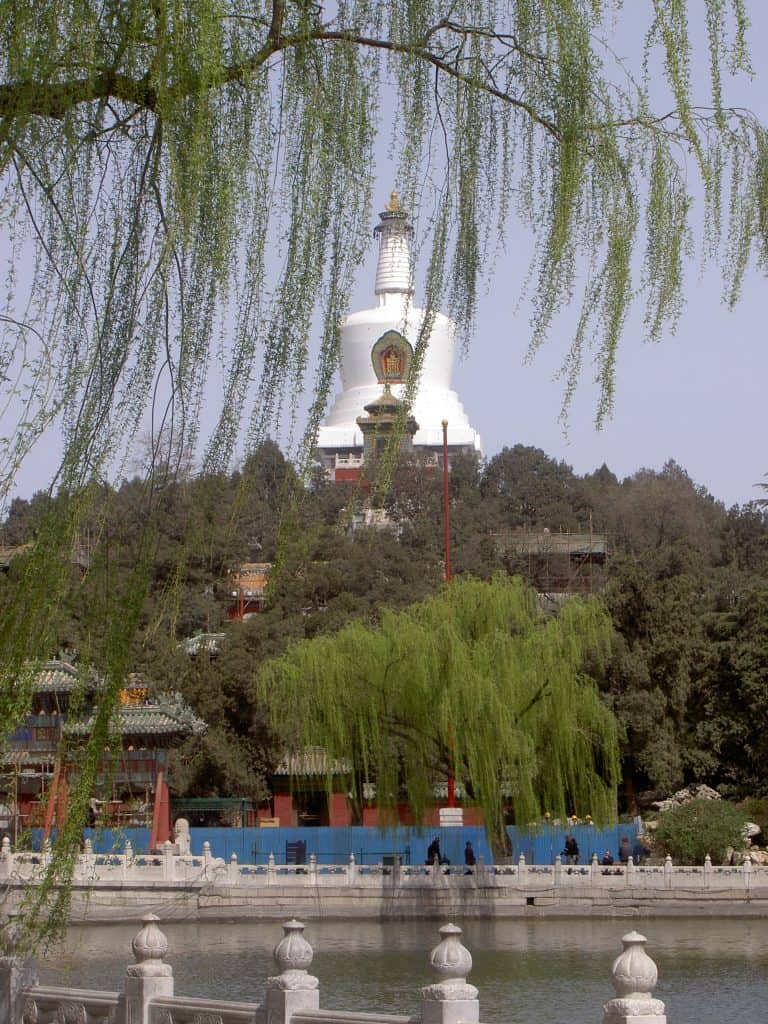 We walked along Wangfujing stopped for something to eat, bought swimming goggles for Yanmei and Daji (for when they were back in Denmark) and went back to the hotel to pick up our bags before we hailed at taxi to take us to Beijing East Station. In rush hour the taxi took 45 minutes, but we had plenty of time as the train wasn’t due to leave until 20:28. As most stations around the world, there were people everywhere, and just like at the airports, tickets were checked and baggage scanned before being allowed to enter the station.

We made our way to the waiting room which was packed and as always, we generated a lot of interest. We gave Daji his travel sickness tablet – we had no idea how he’d manage in a train – longer trips in a car are always risky with him. We were all a bit excited about travelling on a train for the first time in China and for Daji and Yanmei the first time they had slept on a train. 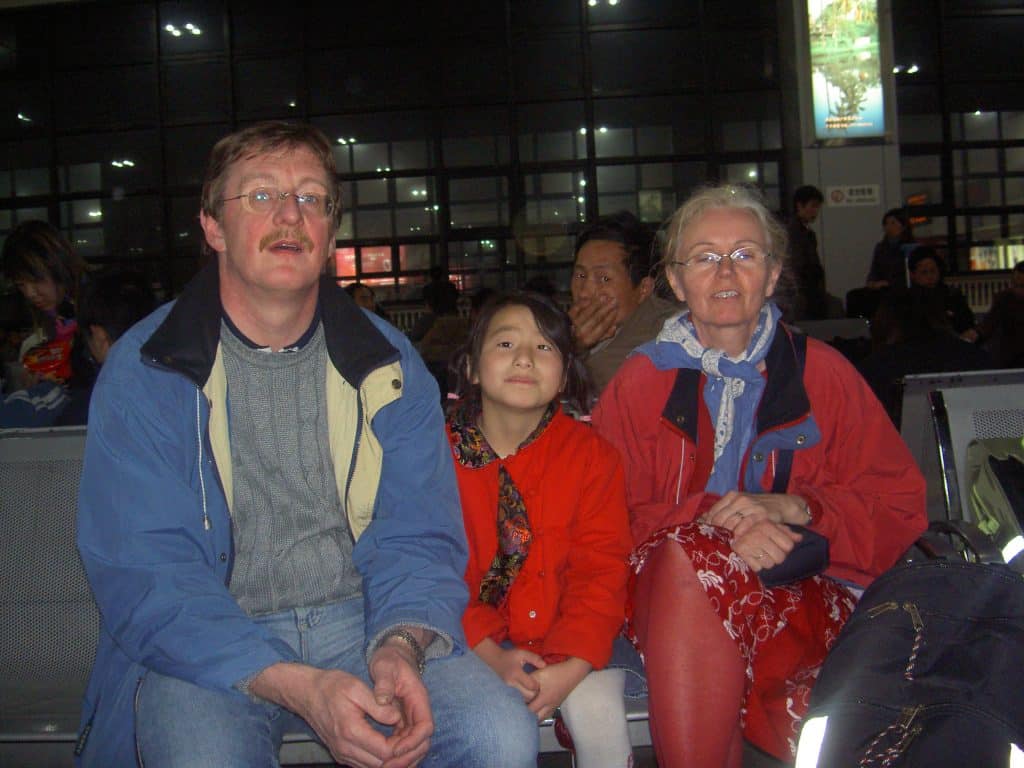 Around 20:00 it was time for us to board and we went through a somewhat chaotic ticket control – and took the long walk down onto the platform and onto the train in carriage 3, bunks 5 through 8. We were pleasantly surprised. Our room had 4 bunks and each bunk had a TV. The train left on time, and we saw Beijing pass by in the dark and before long were in the countryside. The children watched the films on TV (all Chinese) and at 10pm the Chinese music was turned off and we all fell asleep. 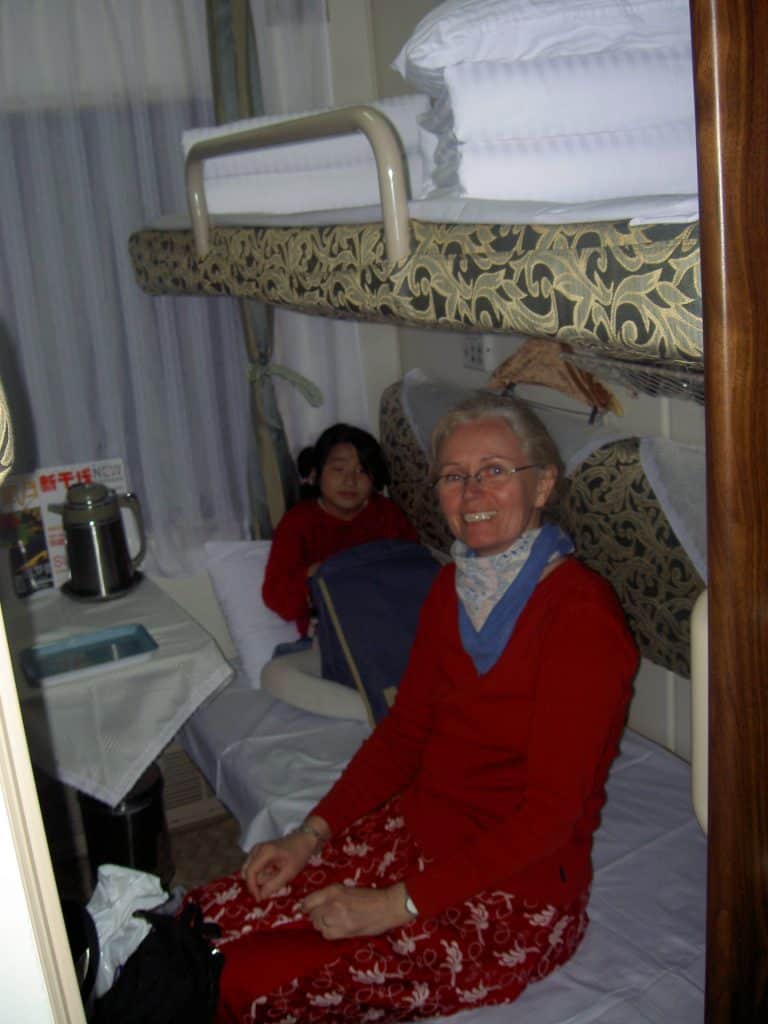 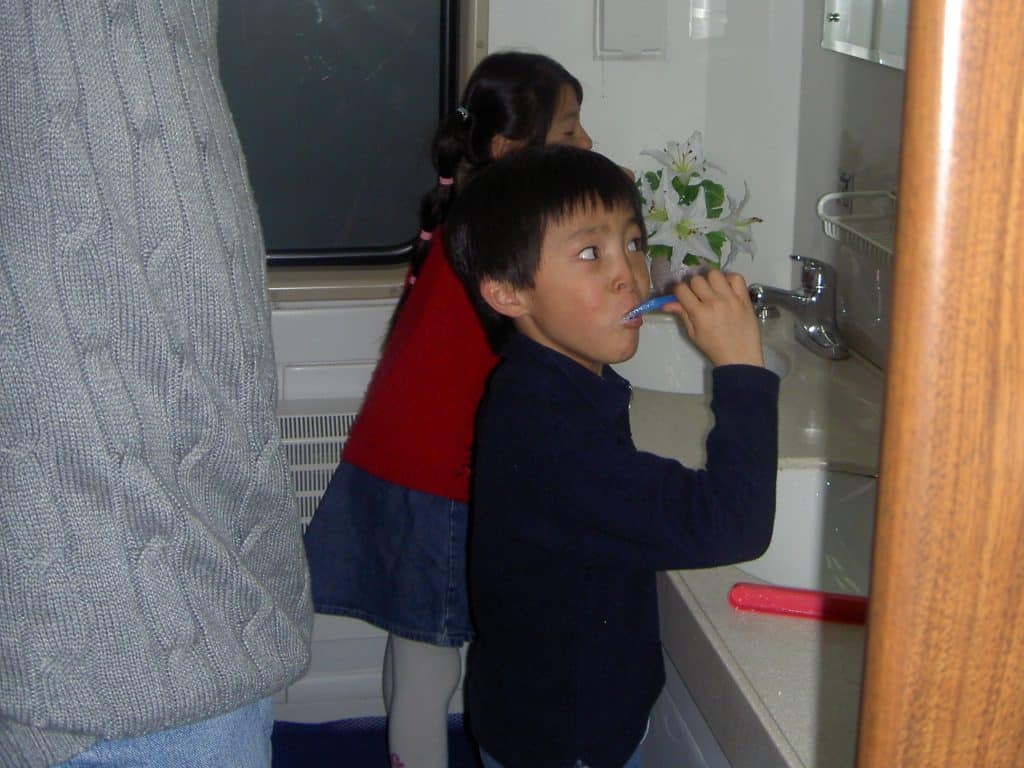 The second part of our journey had just begun – but just then, we were just relieved we’d made the train! 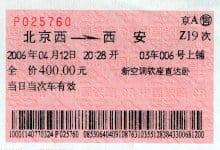