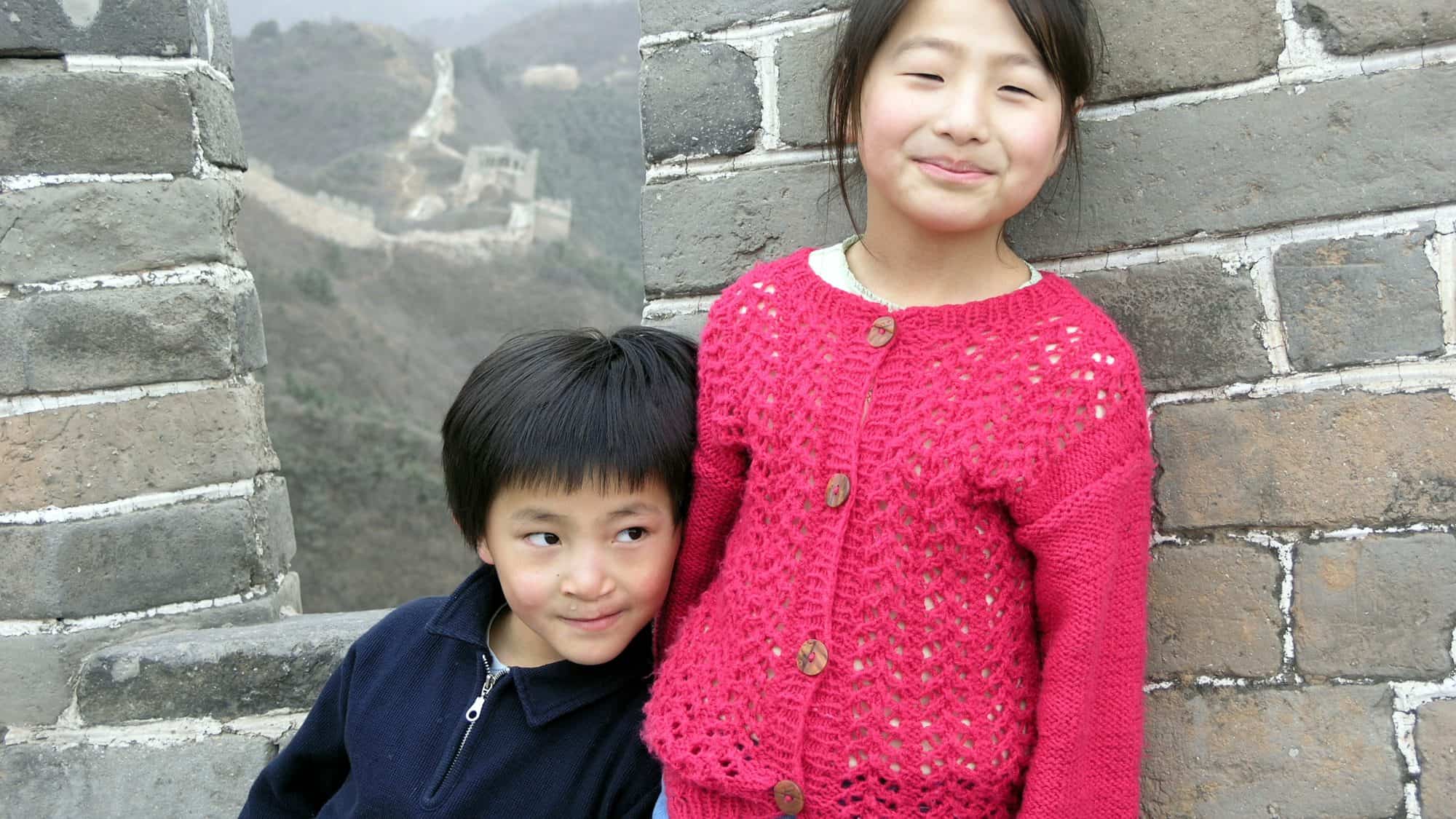 Today was another big day on our Beijing itinerary – the trip to the Great Wall. We’d heard “horror” stories of people being cheated as they tried to get there alone, so we were being careful. We’d read that Bus Number 1 went to Badaling from Quiamen, so Quiamen is where we headed after a full breakfast. For some reason the taxi driver thought we were visiting Mao’s Mausoleum or the Great Hall of the People, as he dropped us of in the middle of Tiananmen Square. It was around 9:15 and we were totally amazed how many people were actually standing in line waiting to visit both places. People must be standing in queue for hours for their 30 second glimpse of Mao.

We subsequently learnt that the bus station is on the west side of Quiamen (100m from where taxi dropped us off). We’d initially walked across the square to the east side where we’d seen many buses parked. After about 30 minutes wandering around, we finally found the bus station – after being directed to a number of private buses. It transpired that bus number 1 no longer existed, but the route still existed and for 90 RMB each for Lene and Steven and free for the children, the Beijing Bus Company would ship us back and forth. The bus was almost full of Chinese and Foreign Tourists, and we found 4 seats and waited patiently for the bus to leave. It turned out the bus wouldn’t leave until every seat was taken, also the two occupied by Yanmei and Daji. By the time we realised this, it was too late to purchase tickets for them to have their own seats and them sitting on our laps for the one-and-half our trip to Badaling and back again.

Each bus is assigned a Chinese guide, and at least ours barely spoke a word of English. We had expected that the bus would drop us off at Badaling and we would take a different bus back – not the case. We would have a couple of hours to climb the wall and take the same bus back. If you missed the bus you’d have to make your own way back! We’d assumed that Badaling was where we’d climbed the wall on our last visit to Beijing – not the case either. Just as we thought we we’d arrived, the bus carried on for another 10km. Finally as we got closer to Badaling, the guide came around collecting an additional 60 RMB. All the Chinese paid, all the foreign tourists were up in arms – we’d been told that the 90 RMB included the entrance fee. It turned out that the 60 RMB was to take the cable car – and the guide was adamant that we all would have to take the cable car – the Great Wall was far too steep to walk up! All the tourists walked up the wall, whilst all the Chinese – except one couple – took the cable car. A Chinese group ready to take the Cable Car. 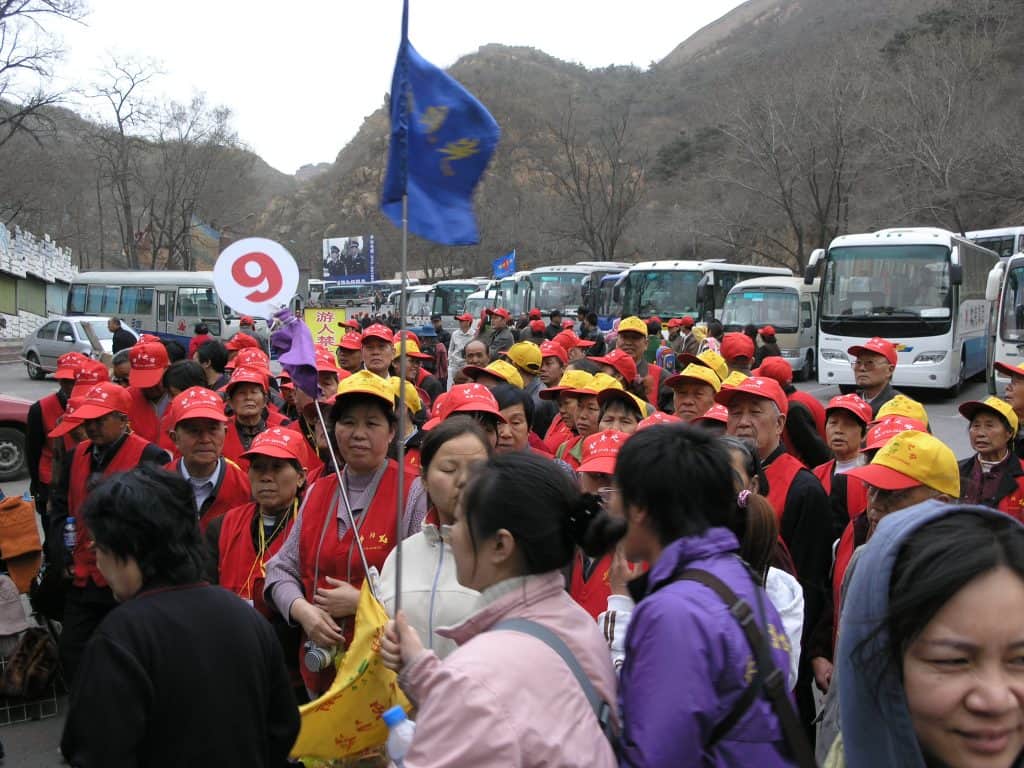 Finally we arrived, we all got off the bus and the Chinese headed into a cafeteria. We were all impatient to get going as we only had two hours. Via the Chinese family that like us wasn’t going to take the cable car we learnt that the Chinese that had disappeared into the cafeteria had bought a tour with lunch included. Luckily they eat quickly and the wait was “only” 30 minutes before we were ready to walk to the entrance. Thanks to widespread protests, the guide extended the time we could be on the wall, all having to be back by 15:15 – giving us 2 hours. 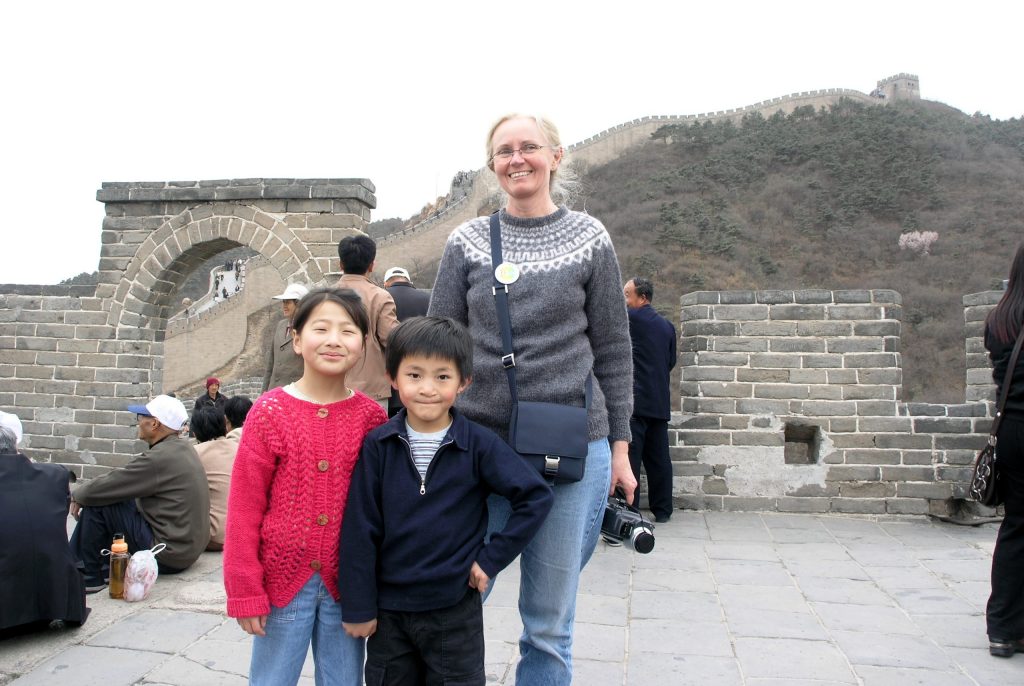 Given all the renovations we’d seen, we’d jokingly said that at least the wall could not be closed for renovation. As we got closer to the entrance, we could see a large military presence in front of the wall, and lo and behold, the wall was closed for visitors – thanks to a visit by the Georgian President. After about 10 minutes they opened one half of the wall – so at least we didn’t have to make the decision to go left or right, we had to go left. 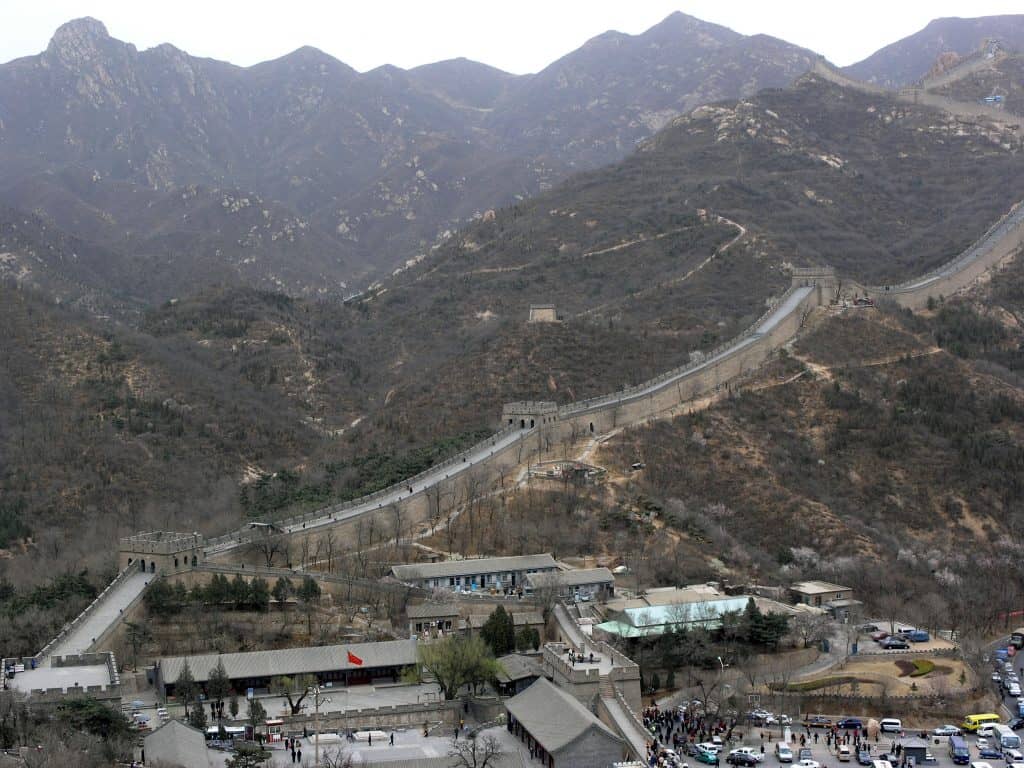 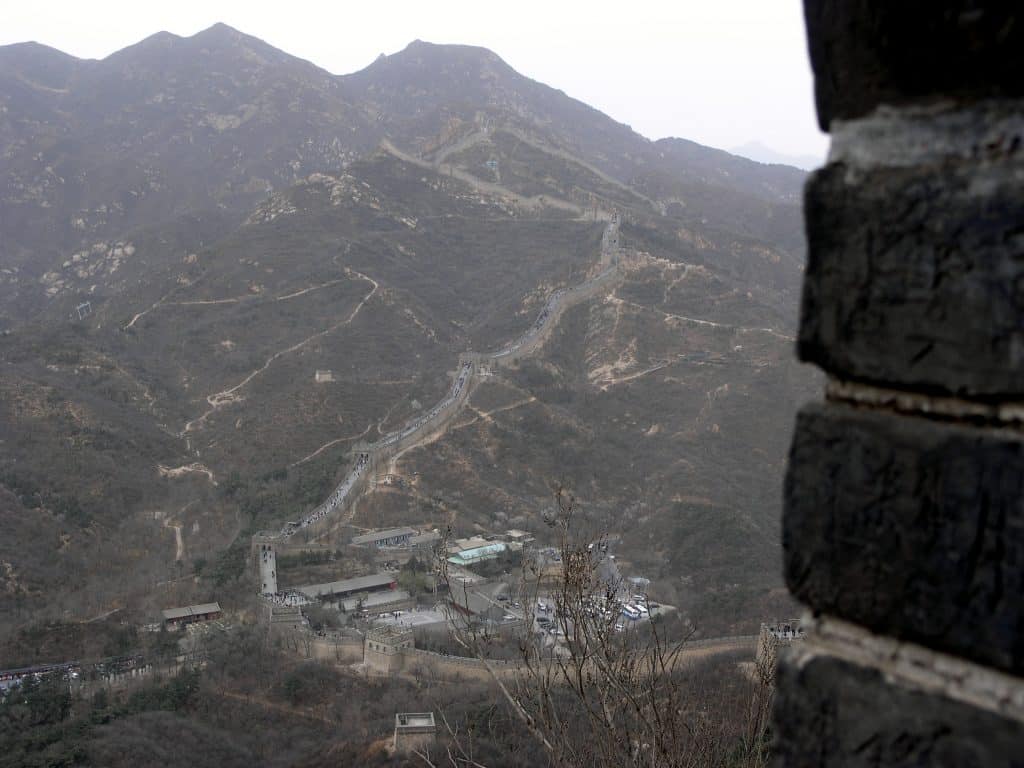 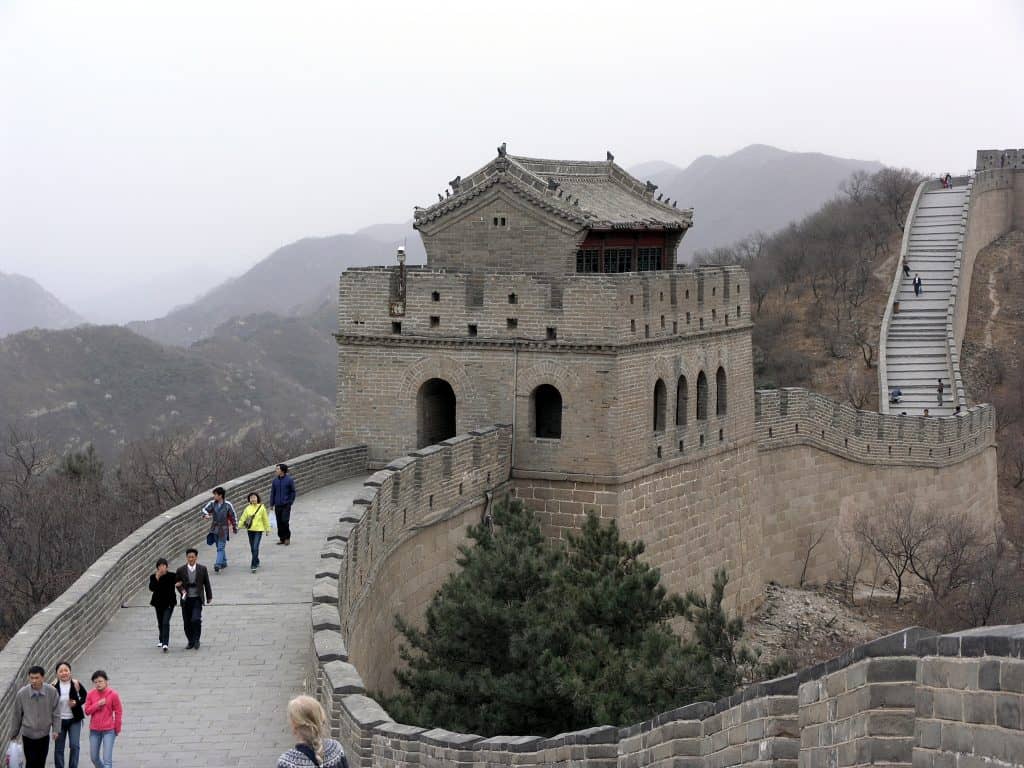 The section of the wall at Badaling was last restored in 1957 and has an elevation of 1000m. In difference to the section we visited on our previous visit, the steps are fairly uniform and not as steep. There are some truly magnificent views of the the wall stretching its way through the mountains. I have a feeling that all the vendors of T-shirts (“I climbed the wall”), postcards, engraving, drawings and whatever other memorabilia tourist would buy, had been cleared away from the right section of the wall due to the Presidential visit – the left section was packed with them. 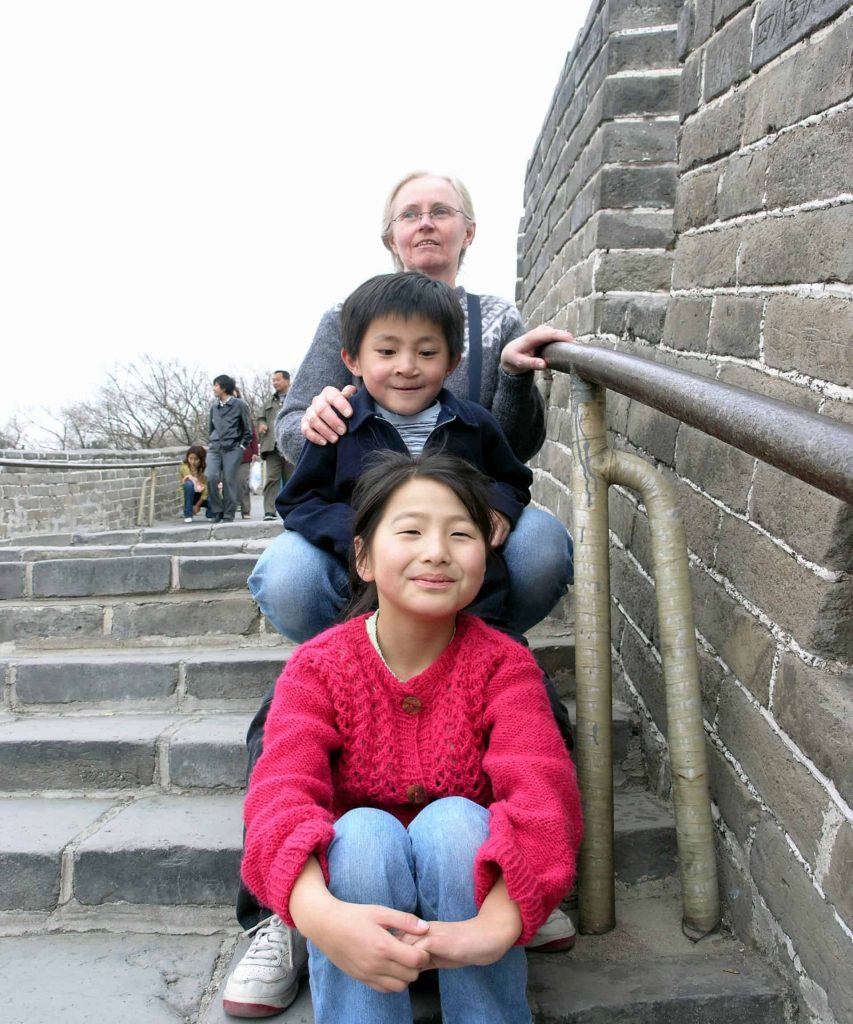 As last time, Yanmei loved being on the wall, and Daji skipped along, climbing the stairs, running ahead. Both thoroughly enjoyed themselves. It can’t be denied that it is a special feeling being on the wall, knowing that it twists and turns officially for over 21.000km. Not least for us, as the Wall ends in the Gobi desert, which we would be visiting in little over a week. For both Yanmei and Daji this was really a big part of our trip to China. 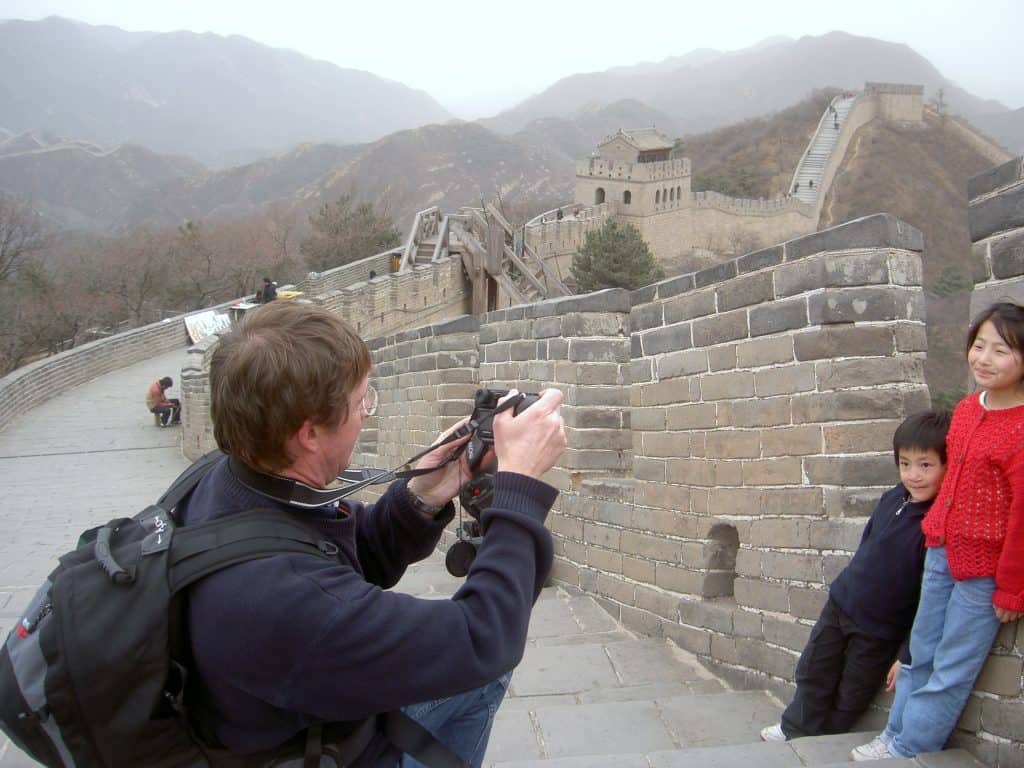 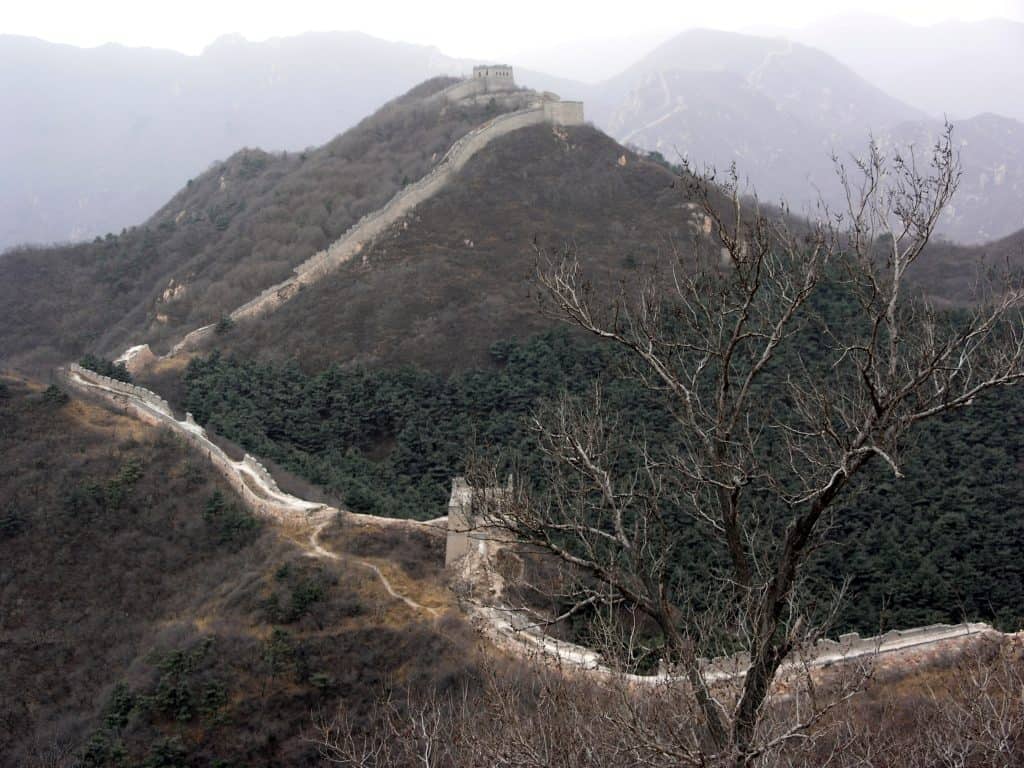 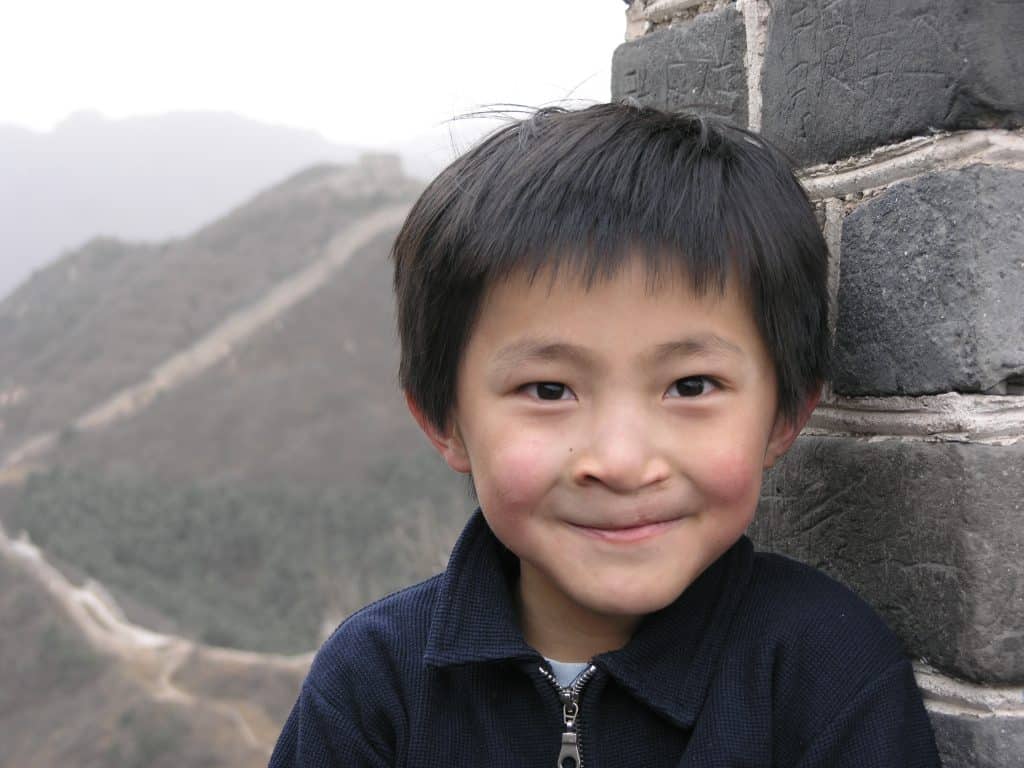 This section of the wall runs for about 1km (with a 1km elevation) and is split into 2 parts – the steep climb and then a flatter part. Most people do the steep climb and then turn back, but it’s worthwhile carrying on to the end of the restored part of the wall where it is possible to view relics of the old wall! Hardly anybody walked along the 2nd part of the wall and as can be seen from the pictures above, we even had a stretch of the Great Wall all to ourselves at one point. 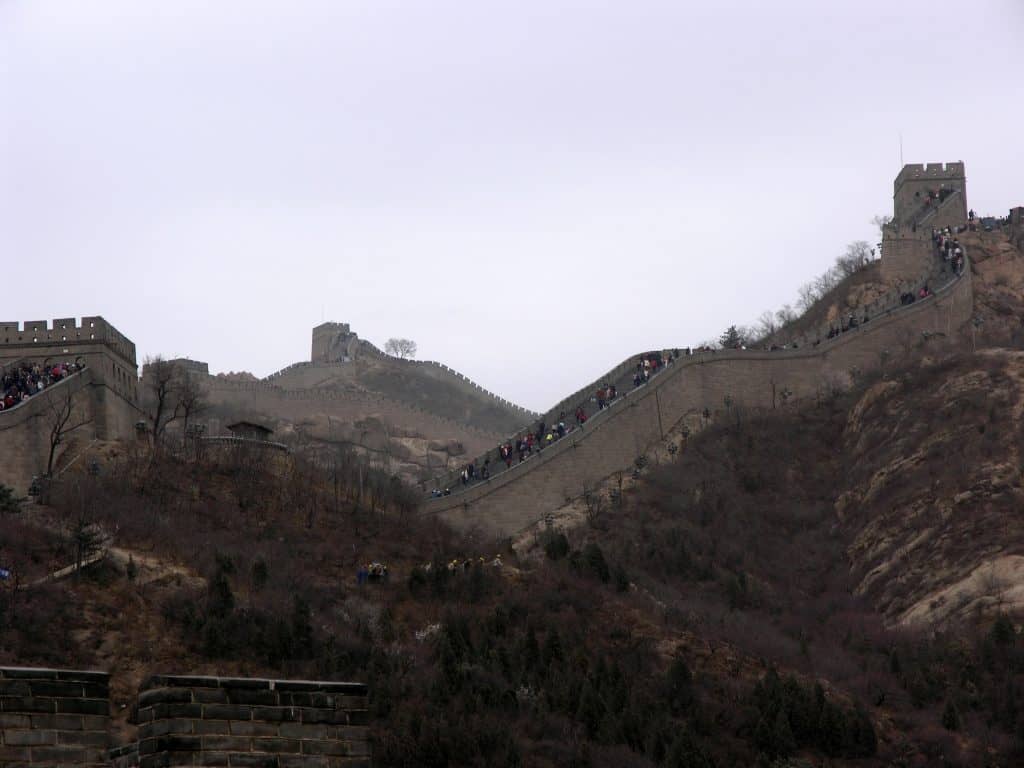 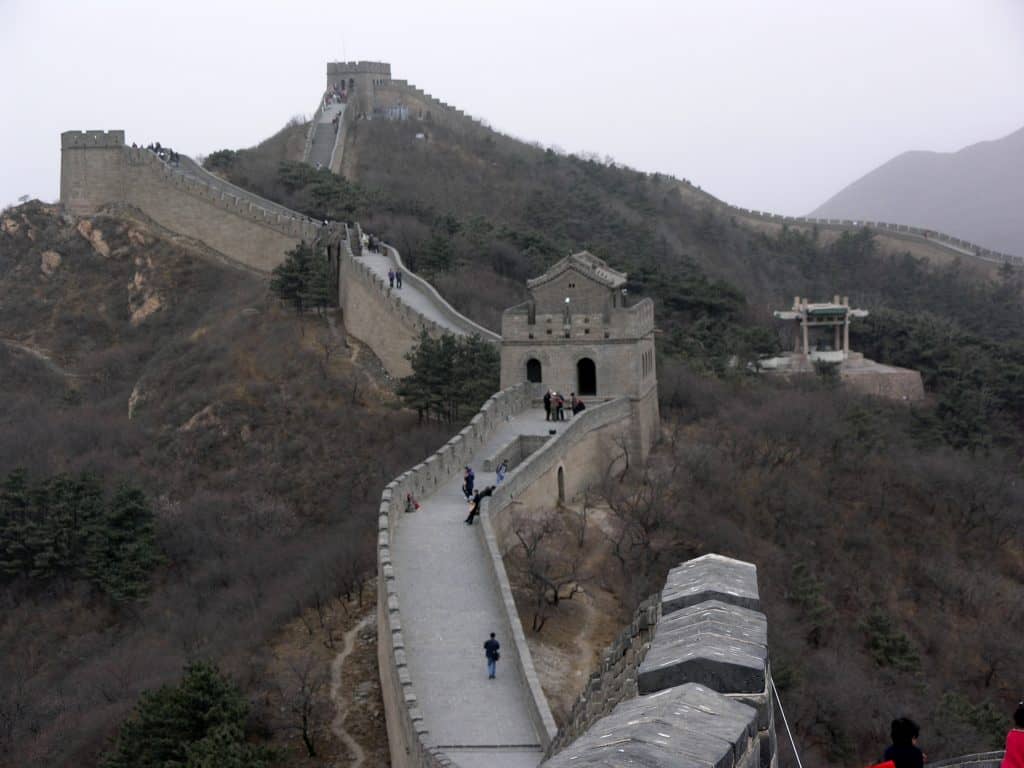 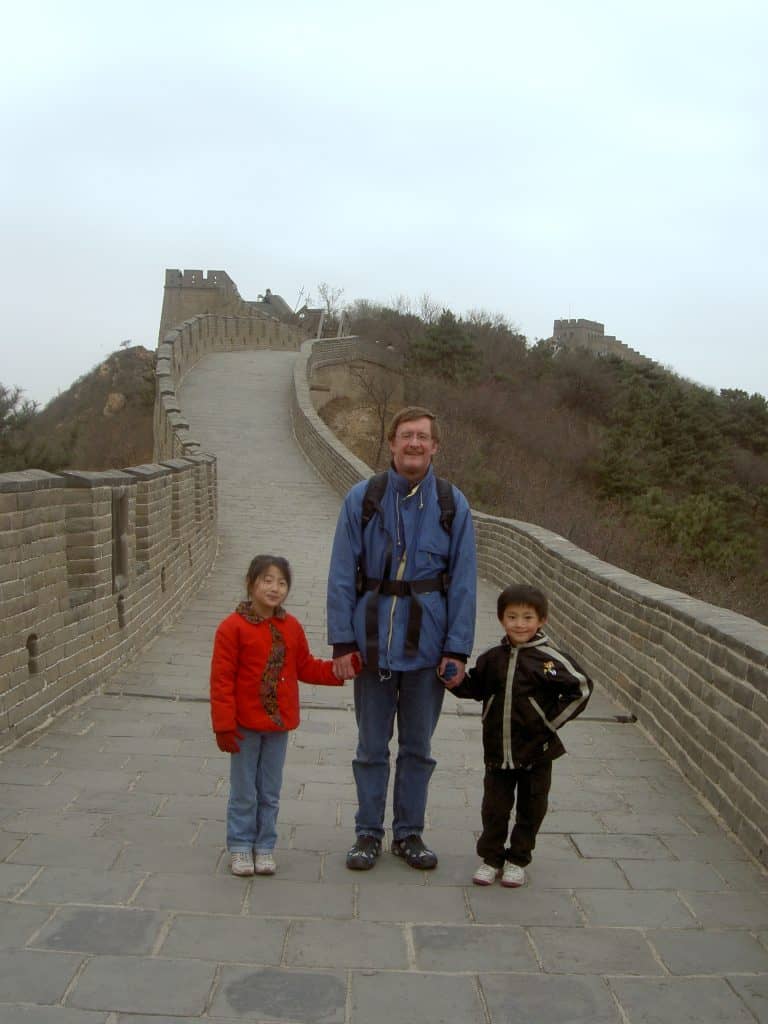 We arrived back at the bus at 15:15 as agreed, but didn’t leave until 15:45 and even then a handful of passengers were still missing. We arrived on the outskirts of Beijing at around 17:00 in total traffic chaos and crawled our way towards the centre. This was too much for Steven who requested that we be let off the bus. The driver obliged and we were quickly followed by a number of others. As luck would have it we had got off the bus about 500m from our hotel. 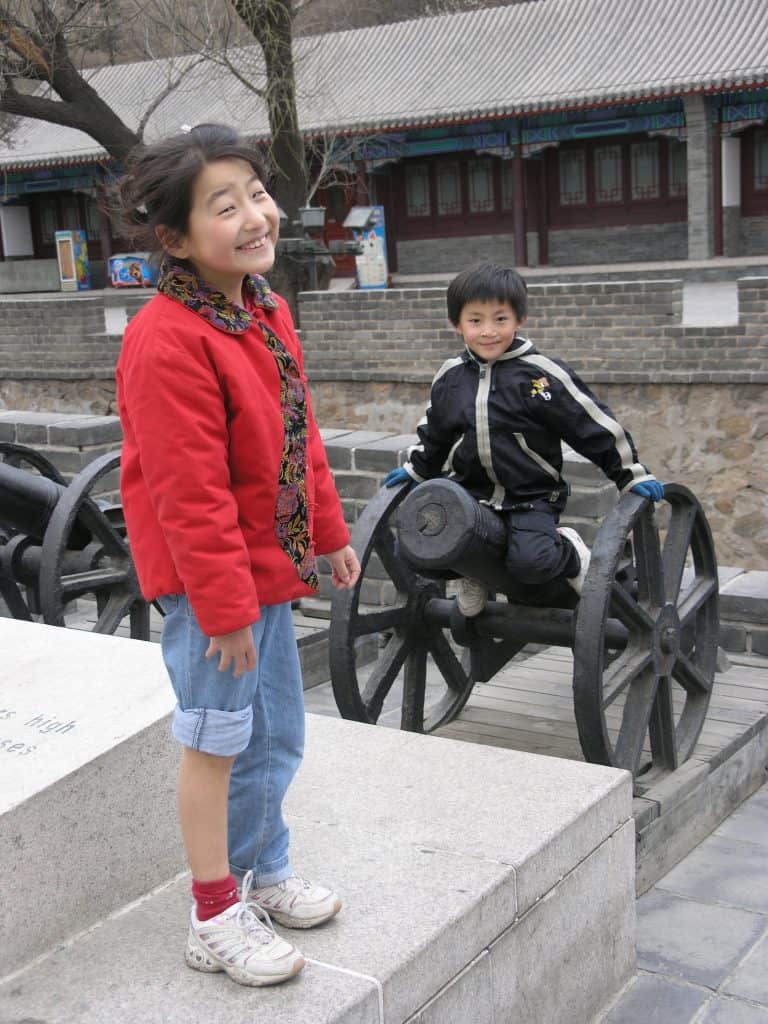 Steven spent some time on the Internet only to learn that Thomas had been ill whilst we were away (Thomas is almost never ill, only when we are on holiday – he was also ill when we collected Daji). We went for a walk in the area around the hotel. He found a large supermarket where he bought some food and drink – including lemon flavoured crisps! It was windy and dusty, a small dust storm was blowing over Beijing. 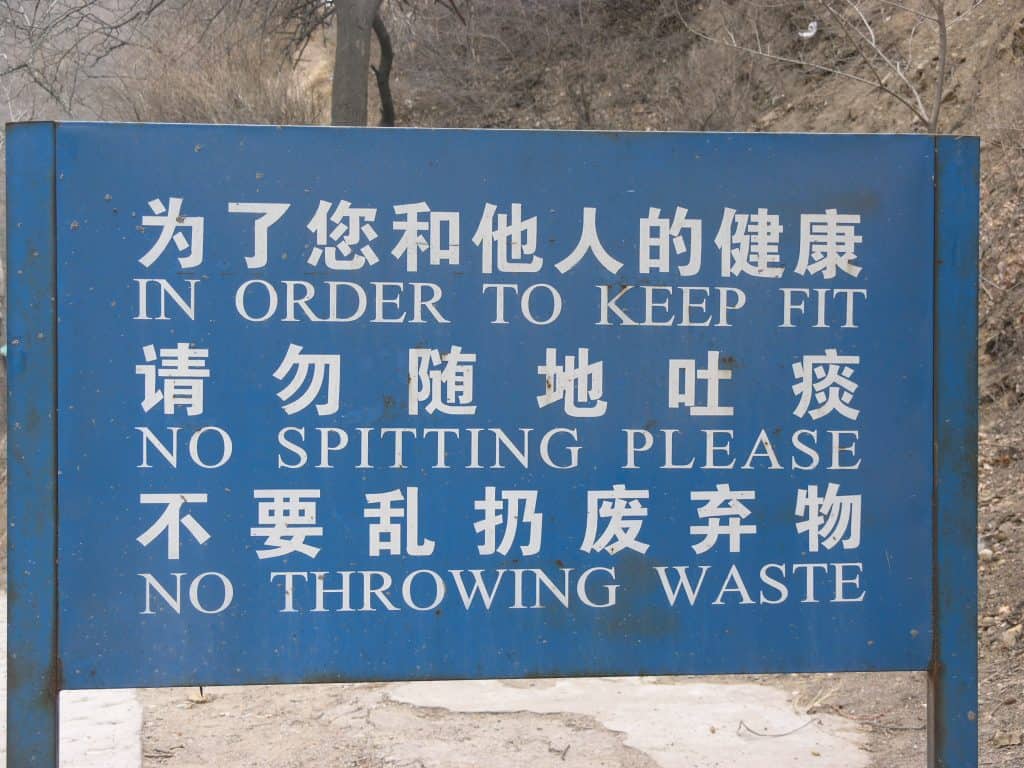 We ended the evening in an excellent restaurant next to the hotel – for anybody staying at the Prime or hotels close by, the restaurant is on the northern side of the Capital Theatre on Baofang Hutong. There is an English menu including delicacies such as bullfrog, dog and snake. We kept to some of the more traditional food – the fried egg plant was absolutely fantastic, the whole menu, including tip totaled 140 RMB.