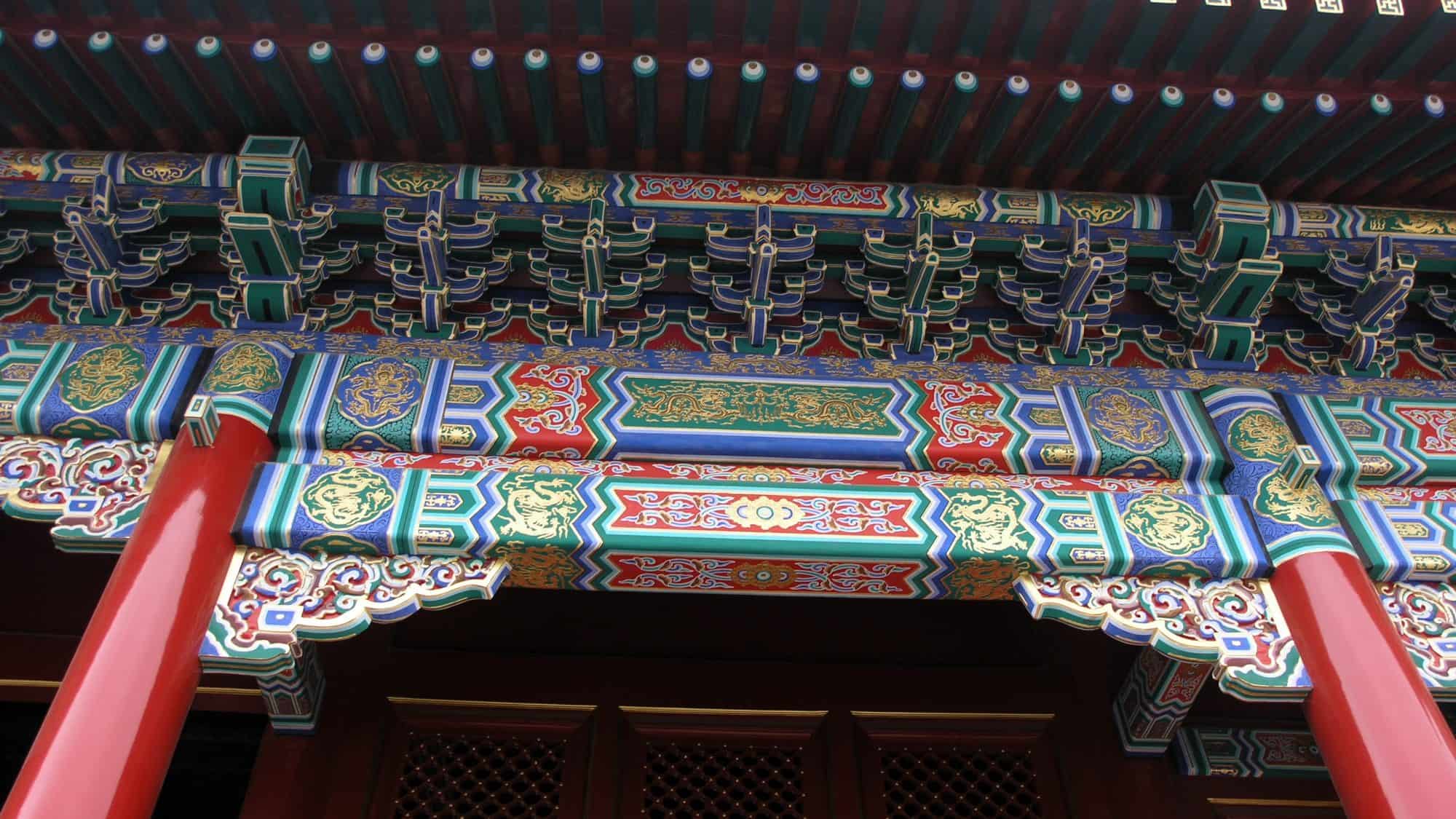 Today marked the start of the part of our trip to China which was arranged by China Women’s Travel Services (CWTS) and therefore a change of hotel. Finally there was warm water in the shower, but we’d all decided to wait until we got to the new hotel before taking a bath. We packed, breakfasted and checked-out before stopping a taxi to take us the couple of kilometers to the Prime Hotel, situated at the end of Wangfujing. The Prime has supposedly Beijing’s largest rooms and is a typical “western” style hotel, without the character of the Hao Yuan we had just left, but with plenty of warm water. 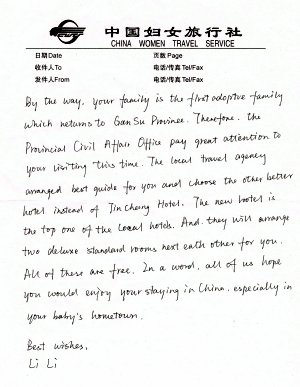 As all our dealing with CWTS had been via mail, we were also a bit anxious to see that CWTS had made the reservations we had agreed upon. We arrived at 10am, and despite a slow check-in process, a room was booked and even available for us. We were even given a slightly larger room. In addition a two page letter from the travel agency was waiting for us, wishing us the best for our trip and telling us that we were the first family to return to the home of their child in Gansu Province. The letter also said we would get a better hotel and best guide – this turned out not to be the case, but more about this later. No matter, the letter was a very nice gesture from CWTS.

The children took a long bath and Lene and Steven showered (there was both a bath and showers in the bathroom) and unpacked. We checked the pool, which didn’t look particularly used or inviting, so we had to disappoint Yanmei and Daji – we had a view of the pool from our room, and we didn’t see anybody use it during both our stays here. 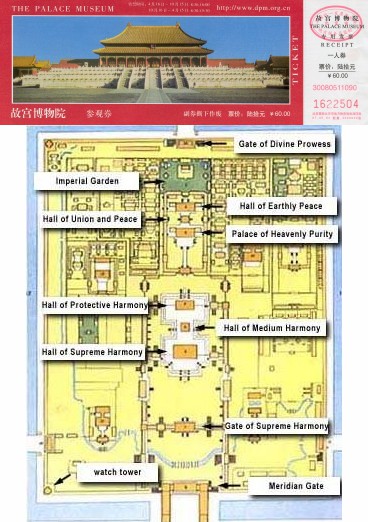 To compensate their disappointment we took lunch at McDonalds – the one and only time during our visit and continued to the Forbidden City, one of the places Yanmei was most looking forward to, after seeing Disney’s Mulan. Just west of the Forbidden City we passed through an area of new houses, Beijing’s “new hutongs”.

The Forbidden City, or Imperial Palace as it is officially know, was originally built in the period 1406 to 1420 and was the permanent residence of 14 Ming emperors and 10 Qing emperors. Initiated by Emperor Yongle, over 1 million labourers worked on the palace, designed specifically to show off his power and wealth. As he also wanted to “Humbly” accept his natural inferiority to the gods, that palace has a mere 9999.5 rooms, half a room less than the Jade Emperor’s Heavenly Palace. 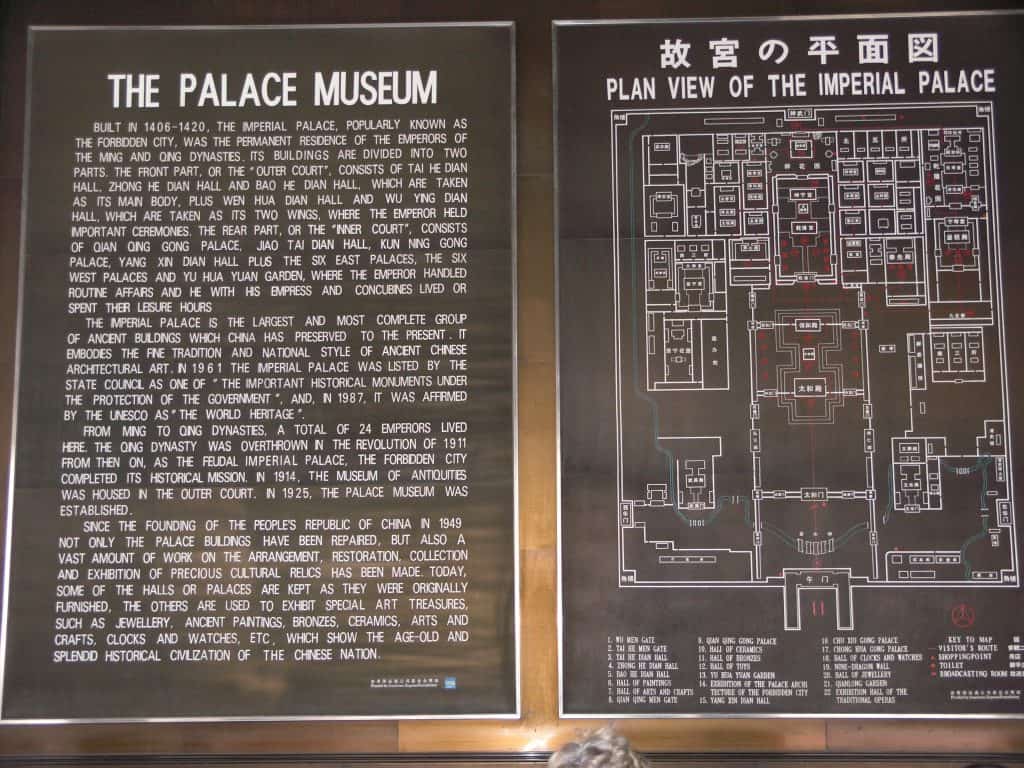 The majority of the current buildings are post 18th century. Fire has always been a major threat to the wooden palace, and six major fires and countless minor fires have sent the buildings up in smoke – both planned (invading Manchus burned the palace down in 1644) and not planned (firework display or burning lanterns). A team of painters and carpenters continually restore the buildings, and it is said that it takes 10 years to do a full cycle of the whole Palace. However it seems like the Chinese are now trying to do a full restoration in 3 years, to be ready for the Olympics in 2008 – the scaffolding and closed off areas currently take away a lot of the charm of the Forbidden City, at least for us.

We arrived around 2pm and after queuing just to see the ticket-seller close her booth with just two people in front of us in the queue. We finally bought tickets and entered through the Wumen (The Meridian Gate), passed the Golden River Bridges and through Taihemen (The Gate of Supreme Harmony). The Hall of Supreme Harmony, the symbol of imperial power and the highest structure in the empire during the Ming and Qing dynasties and the highlight of any trip to the Forbidden City was being renovated, so all we could do was pass through the beautifully renovated Central Right gate and move on towards Zhonge (The Hall Of Central (Medium) Harmony). Below, The Meridian Gate where you enter and the Gate of Supreme Harmony. 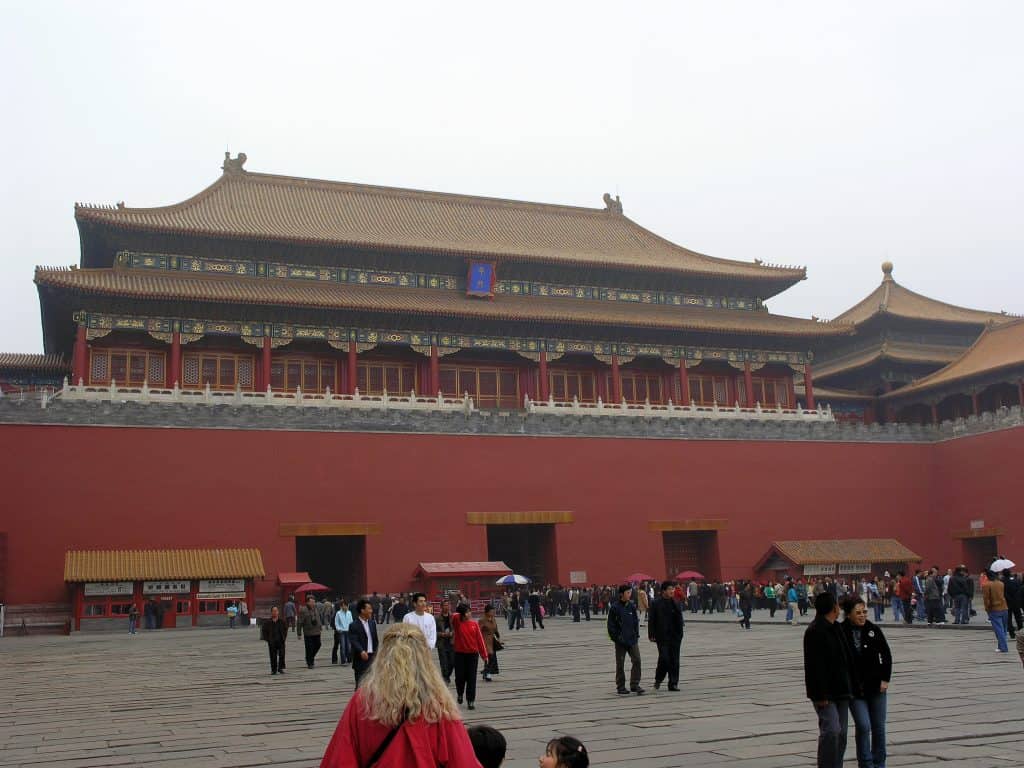 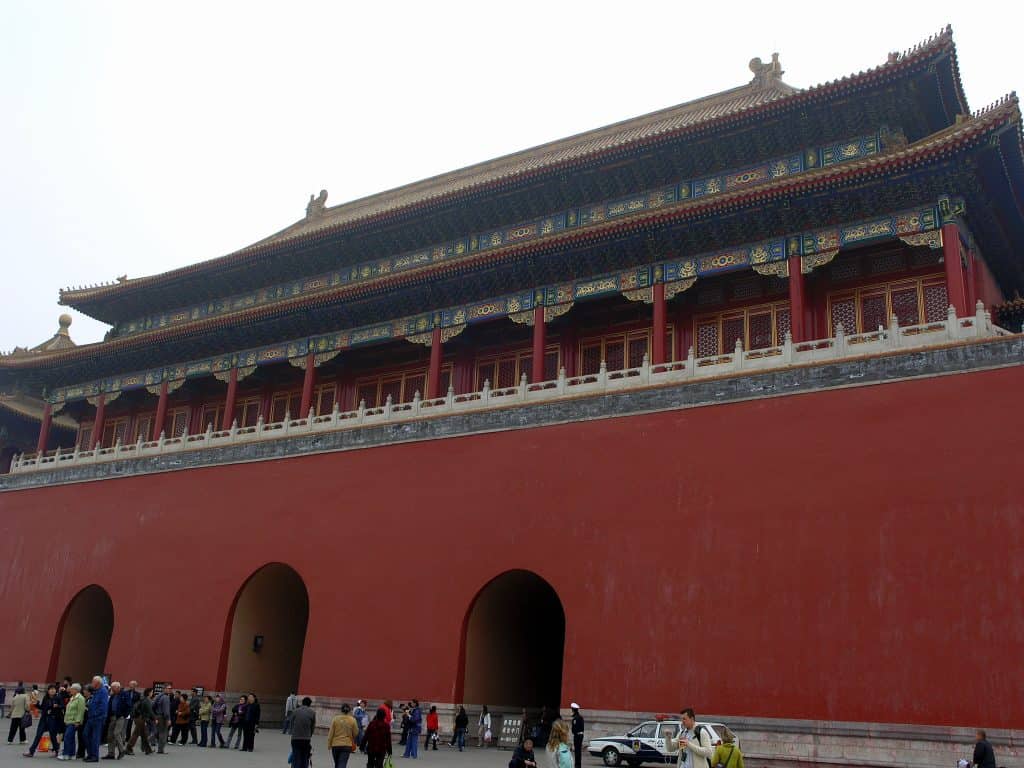 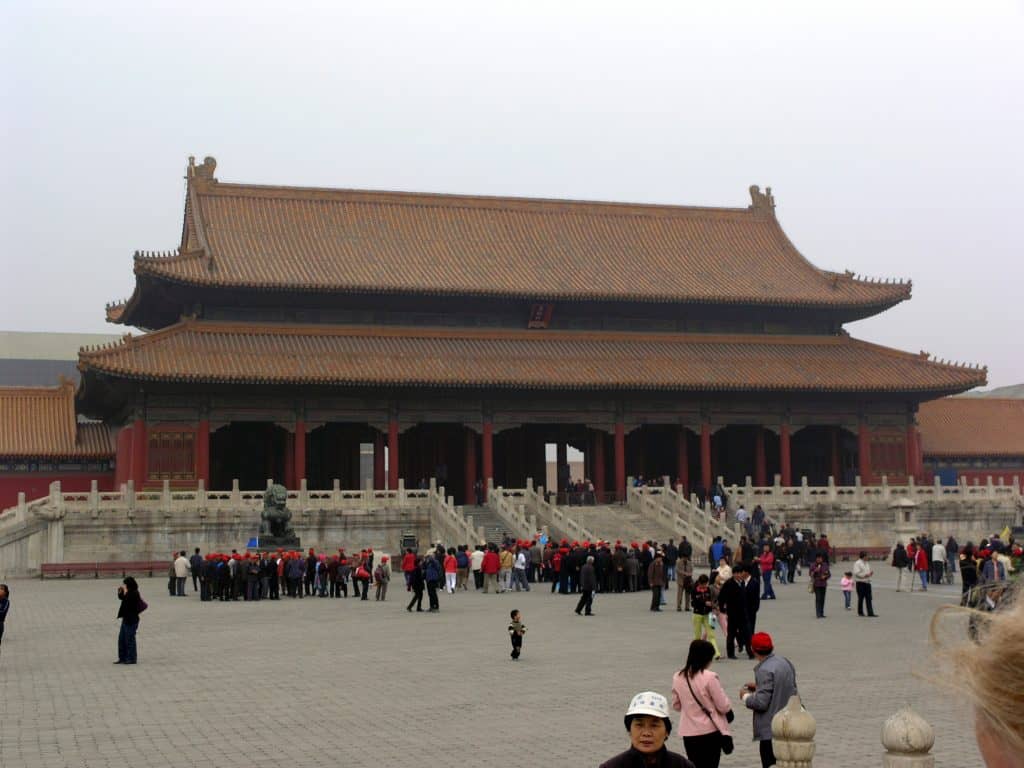 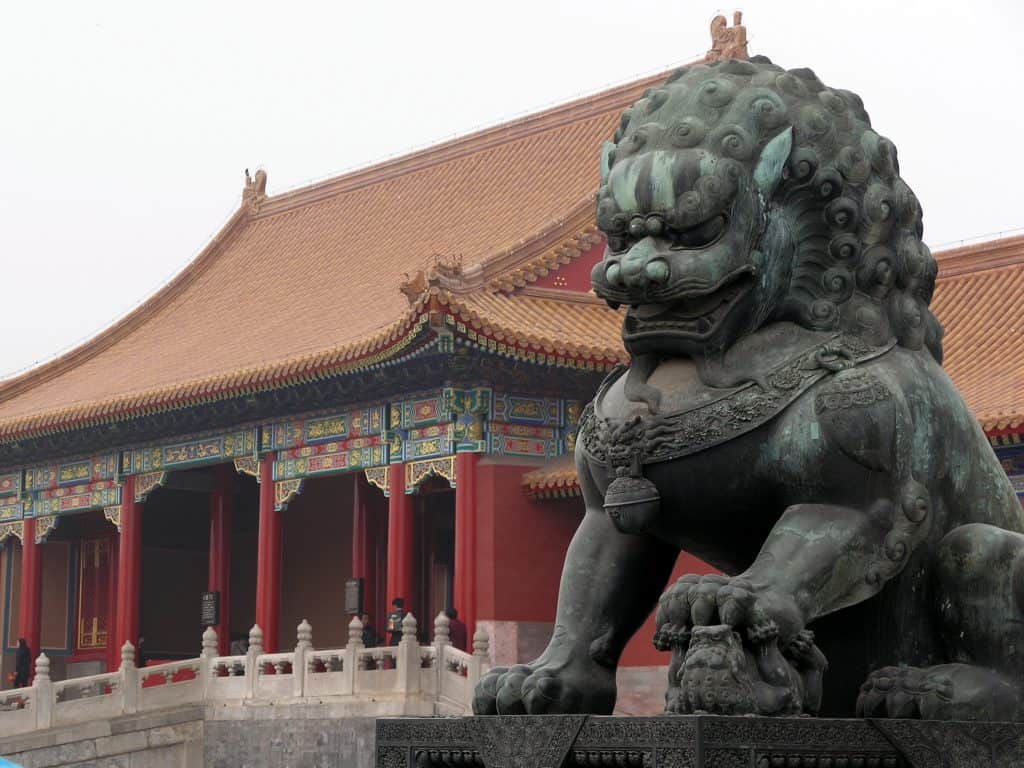 The Hall of Central Harmony was where each year prior to their departure for important sacrificial rites at the Temple of Heaven, the Temple of the Earth or elsewhere, the Emperor would examine the crops and read from a board hanging over the throne reading “The way of heaven is mysterious and profound, and the way of mankind is difficult. Only if we make a precise and unified plan and follow the doctrine of the mean can we rule the country well”. Baohedian (The Hall of Preserved (Protective) Harmony) is where the Ming Emperors would usually change into their ritual garments here prior to the ceremonial installation of an empress or crown prince. While during the Qing dynasty, it was usual for imperial banquets to be held here. 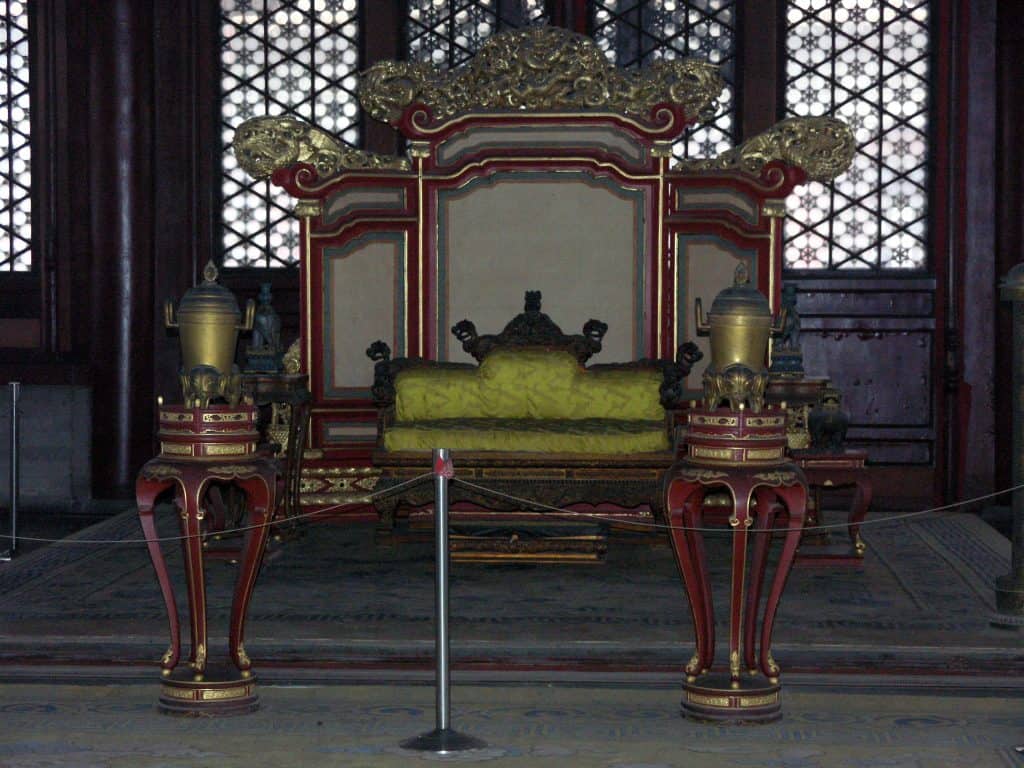 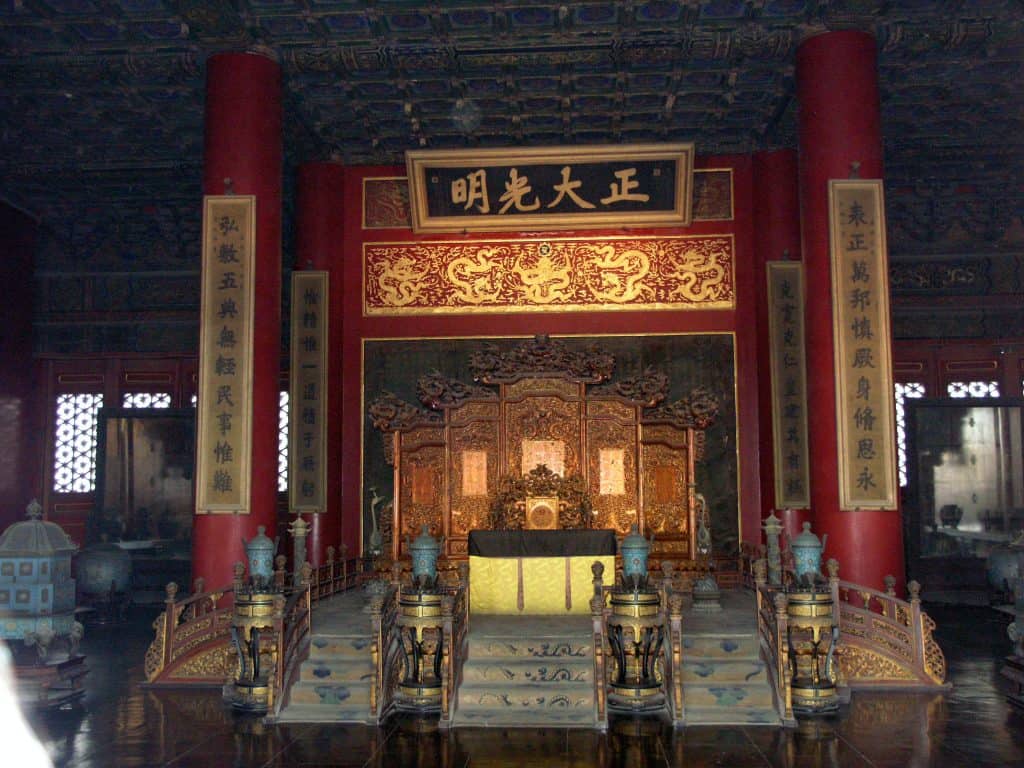 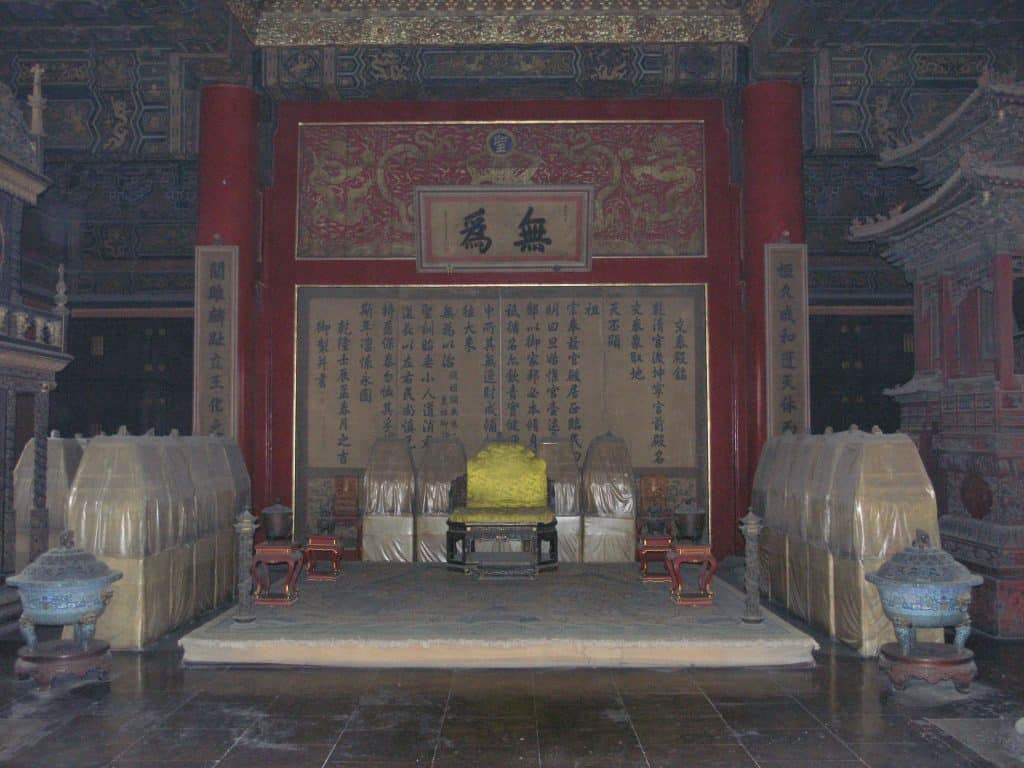 Qianqingmen (The Gate of Heavenly Purity), provides a link between the Outer and Inner Courts, followed by Qianqinggong (the Palace of Heavenly Purity), which was the sleeping quarters of the emperors. Carrying on into the inner court, Jiaotaidian (The Hall of Heavenly and Earthly Union), symbolises the happy marriage of the emperor and empress. Finally, Kunninggong (The Palace of Earthly Tranquility) was the residential palace of the empress during the Ming and Qing dynasties. However, in the Qing dynasty, the newly wed emperor and empress lived in the East Warmth Chamber of this palace for just a few days. After this time, the emperor would move to the Hall of Mental Cultivation and the empress would move to another palace. 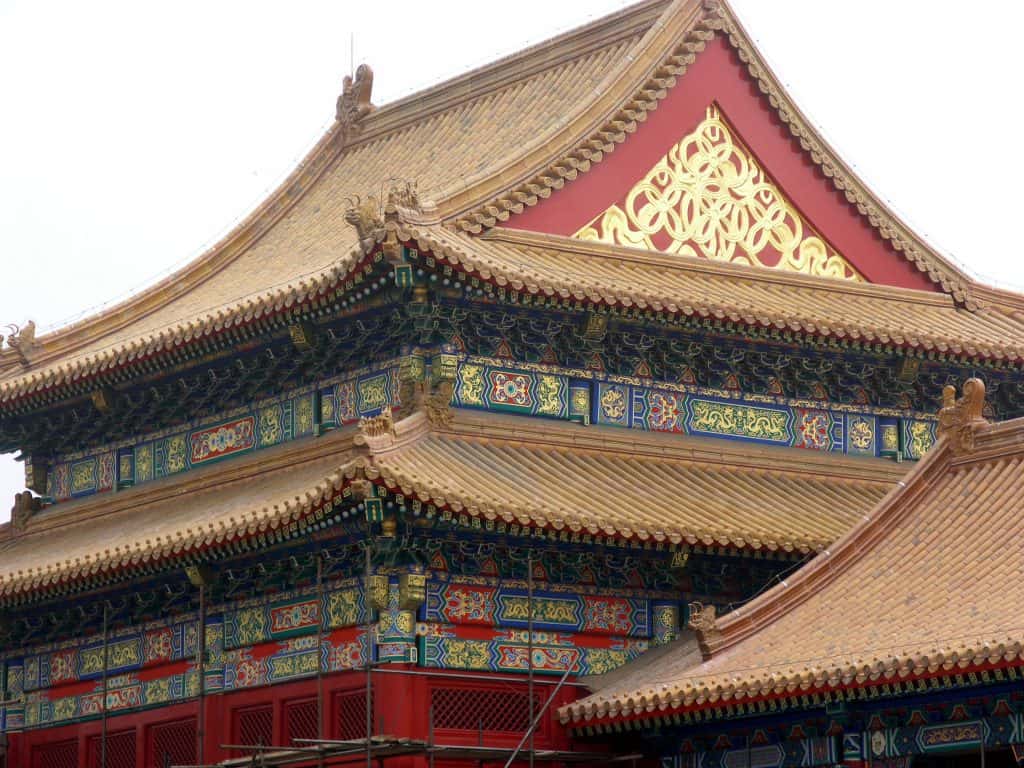 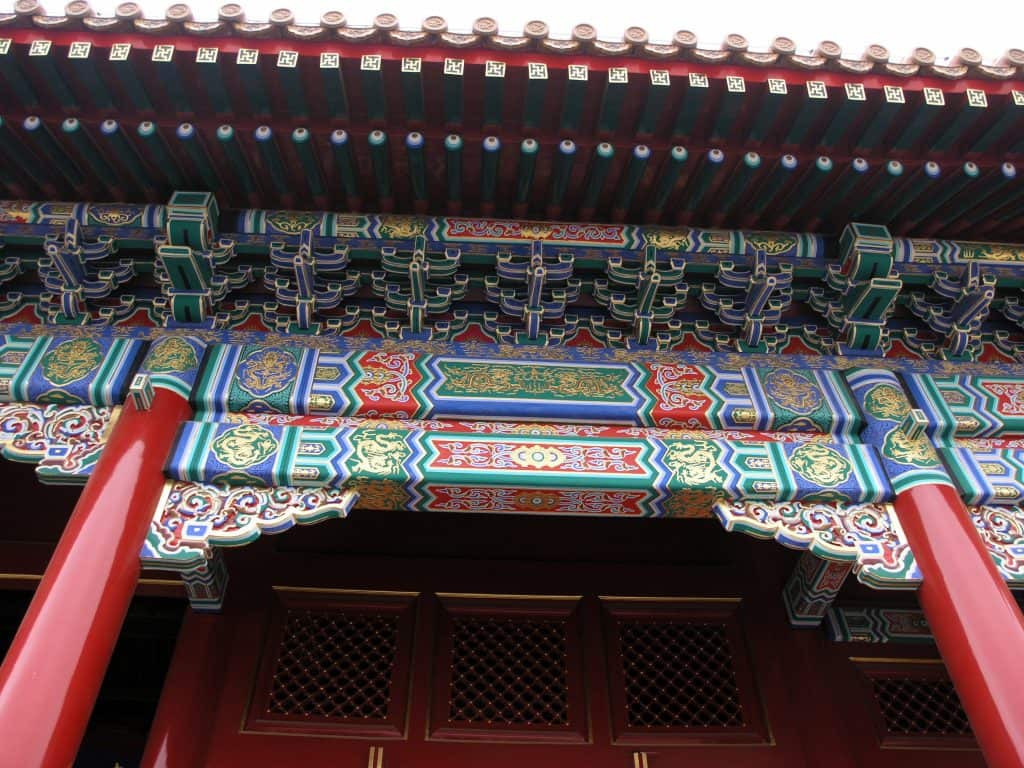 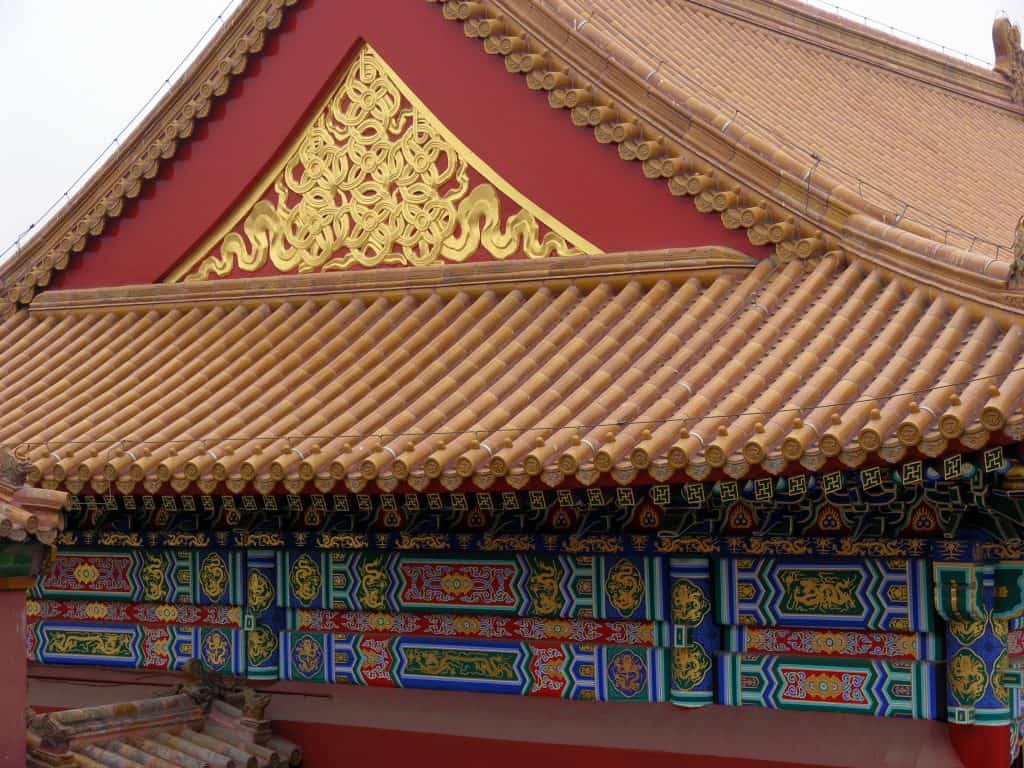 After walking through the palaces, one arrives at Yuhuayuan (the Imperial Garden), rectangular in shape, covering approximately 12,000 square meters and was a private retreat for the imperial family. Lions, dragons, turtles and many other real and imaginary animals can be found scattered around the Forbidden City – the most spectacular of them being the Dragon stairs up to the Hall of Supreme Harmony, consisting of 9 dragons playing with pearls, all sculptured from one single block of marble weighing 250 tons, 16meters long and 3meters wide and 1,7 meters thick! 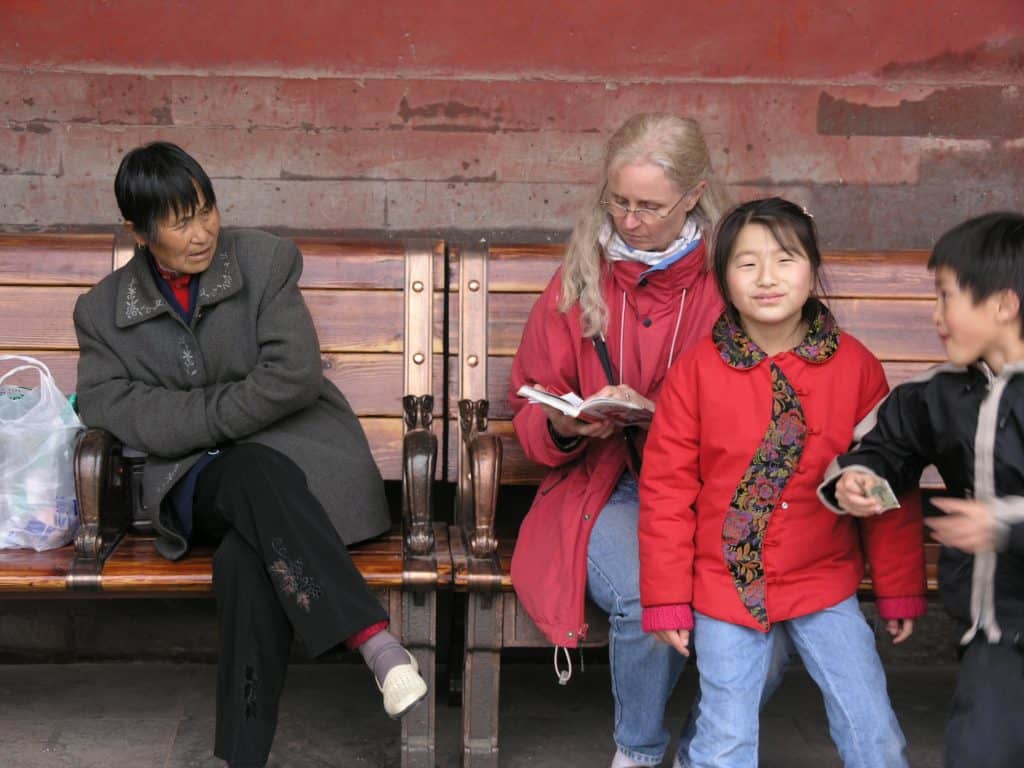 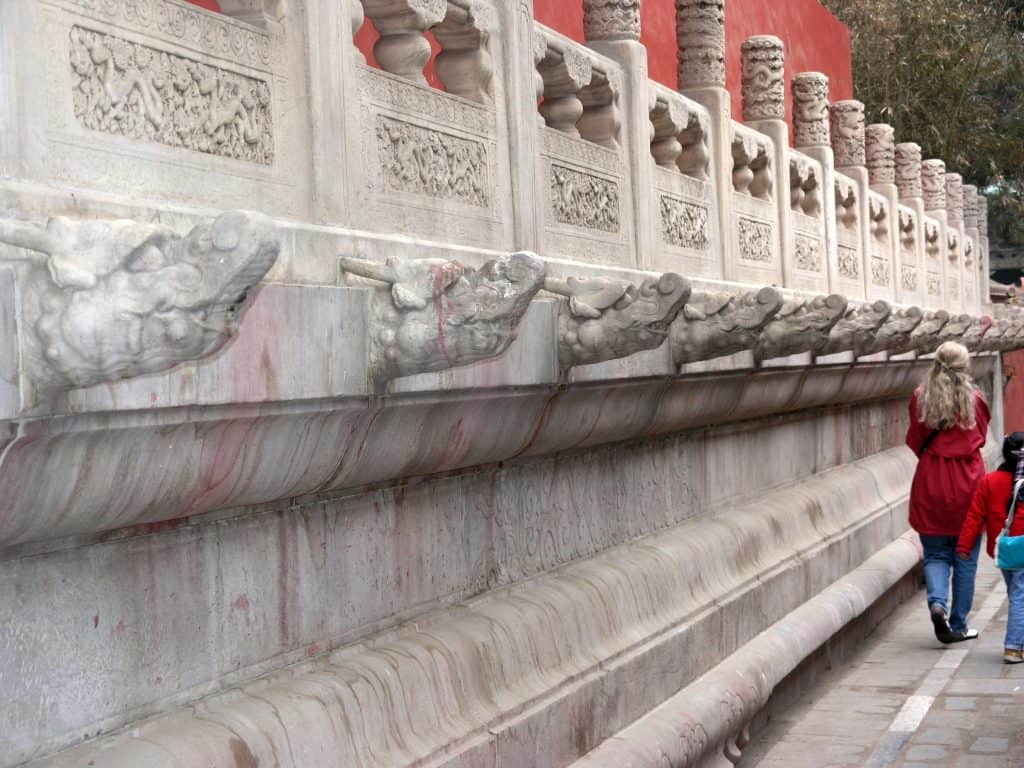 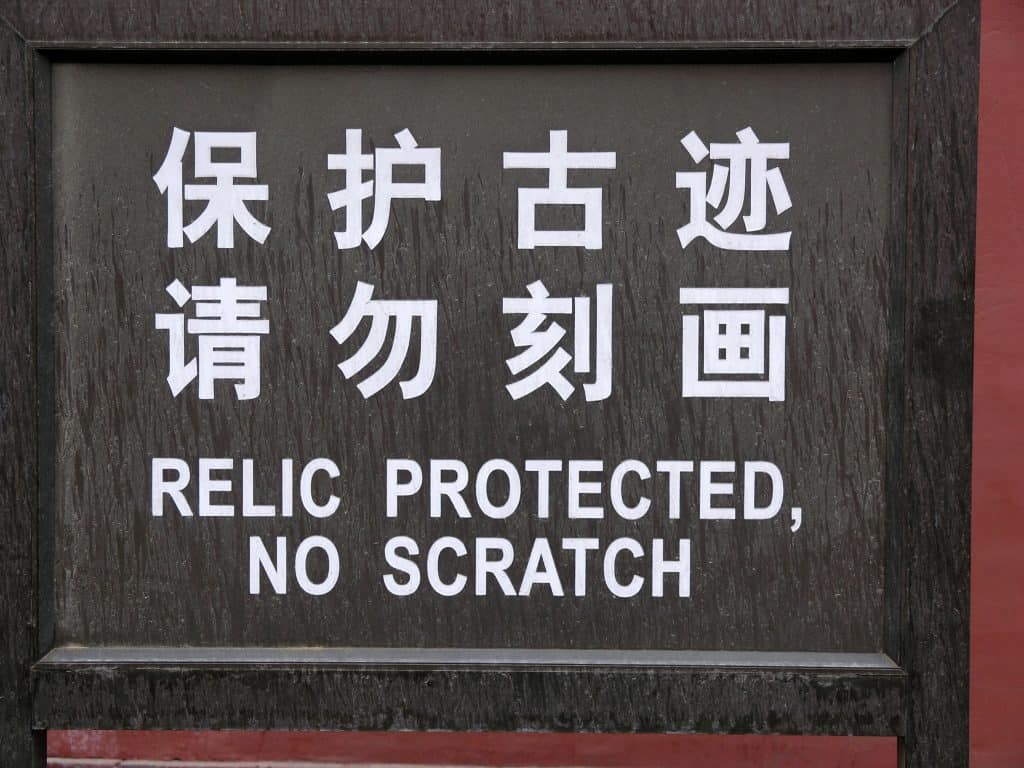 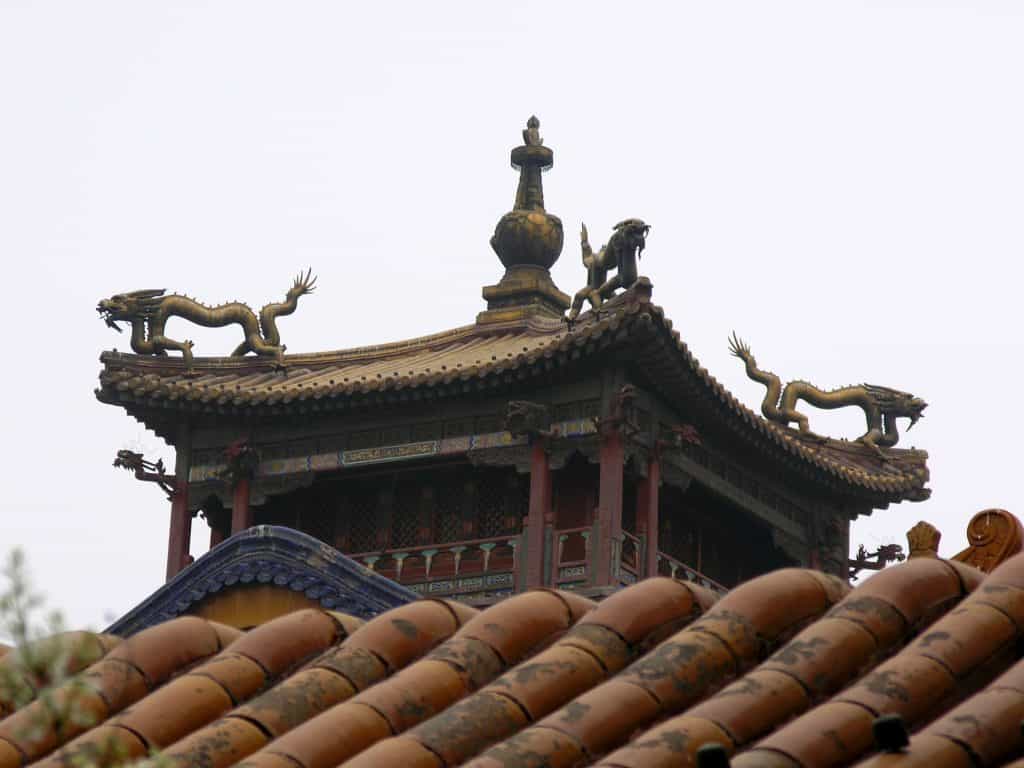 We walked back to the southern entrance along the west side of the Forbidden City, passing more palaces and the Garden of Kindliness and Tranquillity. Yanmei was happy to have been here and Lene did a great job reading the guide books so that we all better understood the relevance of the different buildings. Daji enjoyed the open space and the stories about emperors and wars! Apart from the renovation work taking place, which was frustrating, the biggest problem was the hoards of Chinese old age pensioners who, once they’d decided to enter a palace, simply trampled everybody underfoot – it made no difference that letting people out would give them more room to get in! 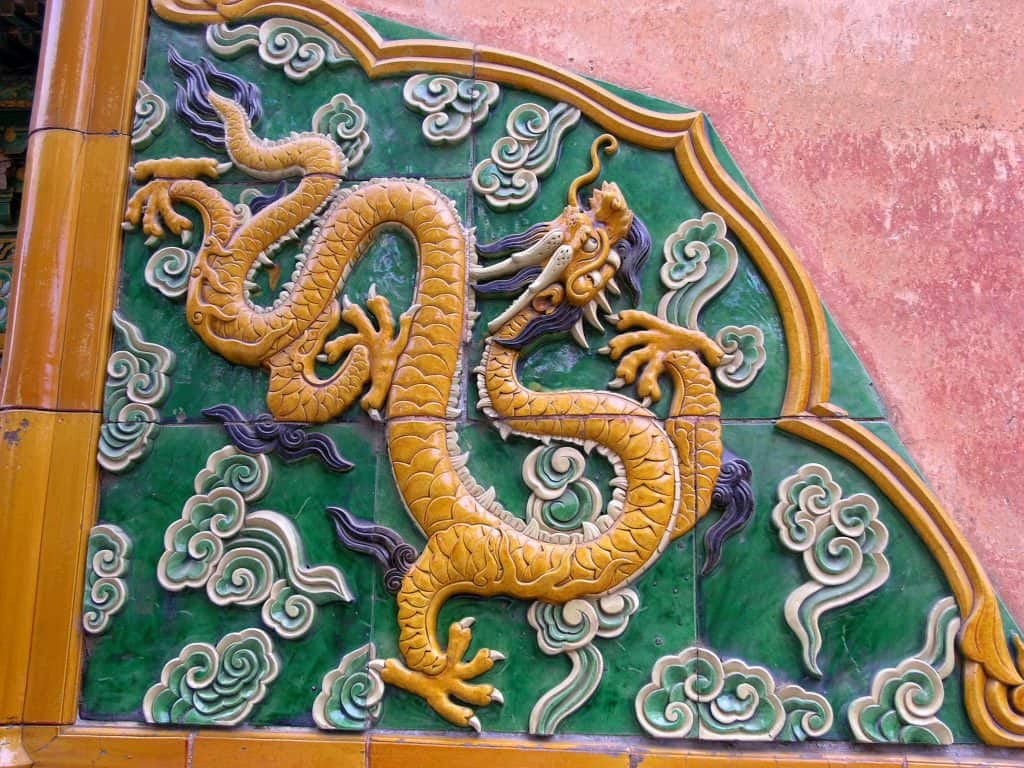 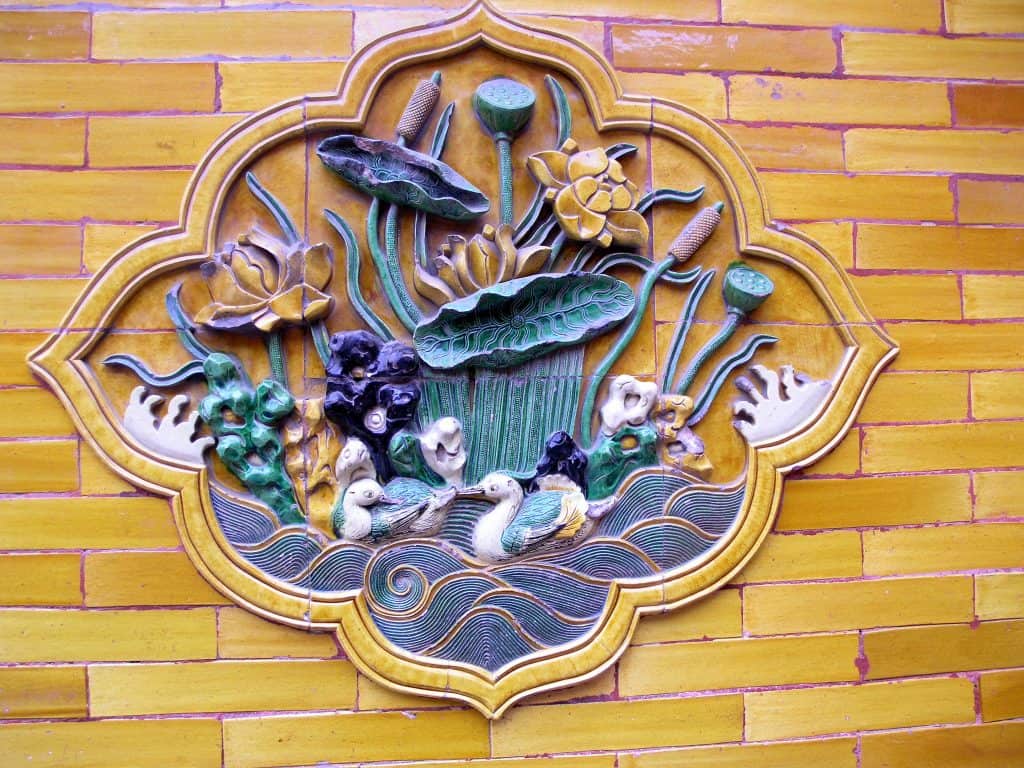 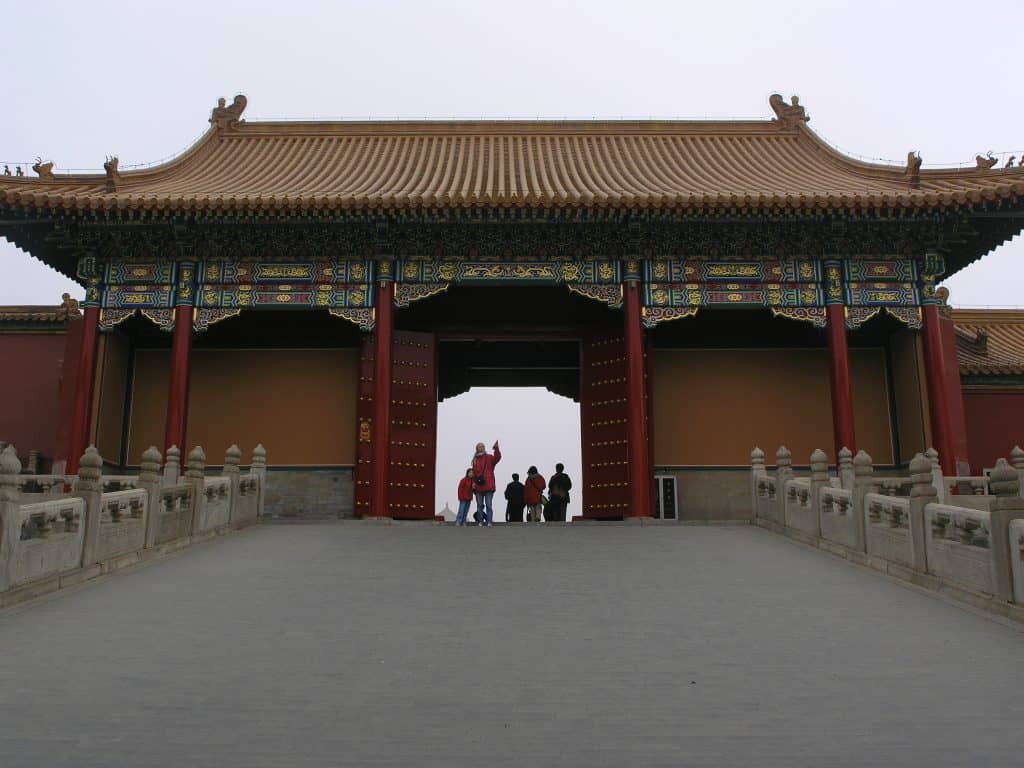 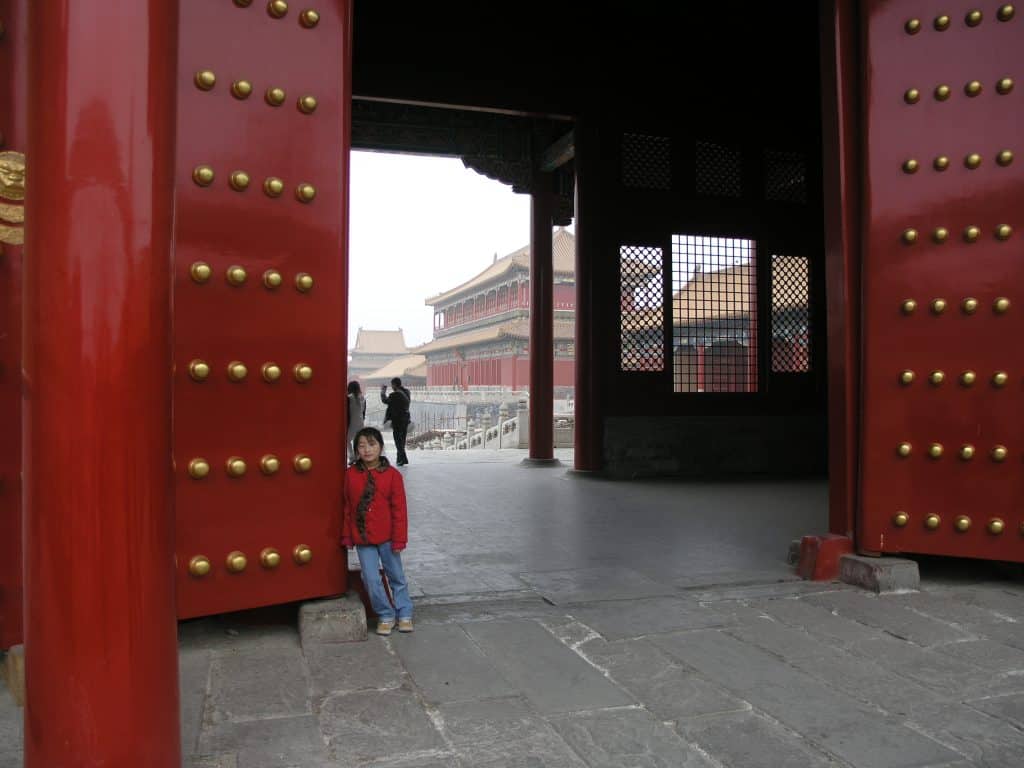 It was nearing 5pm, closing time, as the afternoon got colder. Leaving the Imperial Palace and walking towards Duanmen and Tiananmen, representatives of the Chinese army were out exercising – high-kicks, marching in line, gymnastics and kung-fu types of exercises. It seemed to be more for the sake of the departing crowds than for anything else, but lot’s of people stopped up to watch – including Daji who loved every second. Back at Tiananmen for the 3rd time in 4 days, we took yet another picture of Mao.

We made our way back towards Wangfujing and stopped at a “teddy bear” shop and bought Milou, Tintin’s dog (Terry) for Thomas. We were a bit cold and took a tour around Beijing Shi Baihuo Dalo – for many years China’s largest and best known (state run) department store – now just like any other department store in the world. We left with a handful of clothes for Yanmei and Daji – as soon as they only have a few copies of a specific garment left, they seem to dump the price by 30-70% and pile it all together. There are some real bargains to be had. 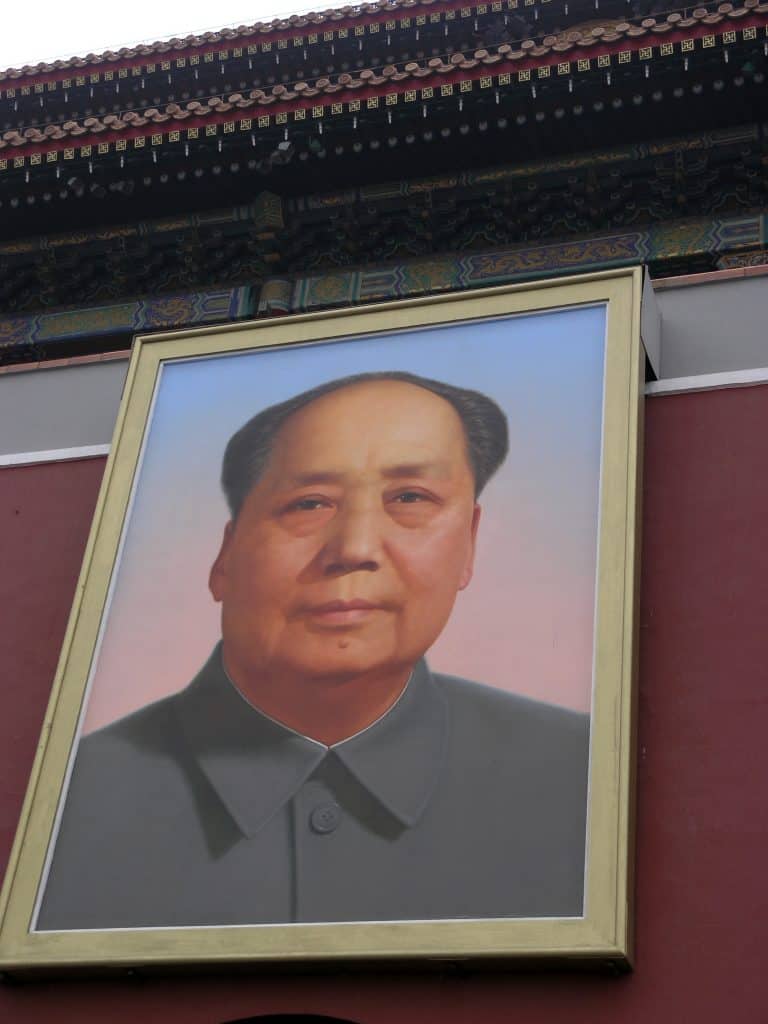 We eat at a Thai restaurant – expensive and not particularly good, but we were also cold and tired. We walked through Oriental Plaza and along Dongdan in the direction of our first hotel. The shop Lene had purchased her cardigan the night before had promised to get hold of a pair of shoes Lene had tried but which they didn’t have in her size. As soon as we walked in it seemed pretty clear that they’d forgotten, so we continued north, purchased cakes and window shopped. We went in a shop that had a window of colourful clothes and Lene ended up with a jacket and top at a 10th of the price these would have cost in Denmark.

We turned west and walked back to the hotel through Baofang Hutong looking into the fluorescent lit bars with men watching TV or playing cards, and all the small shops still doing business, despite it almost being 10pm. We ate our cakes, and fell asleep, another busy day behind us, and the Great Wall looming in front of us! 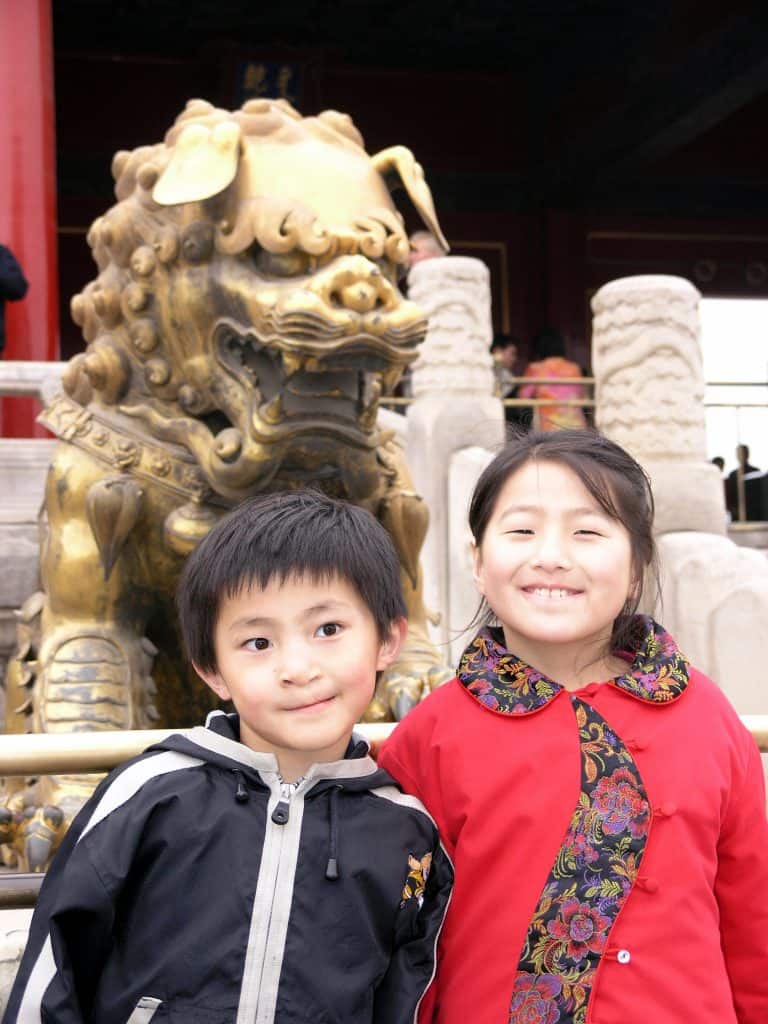