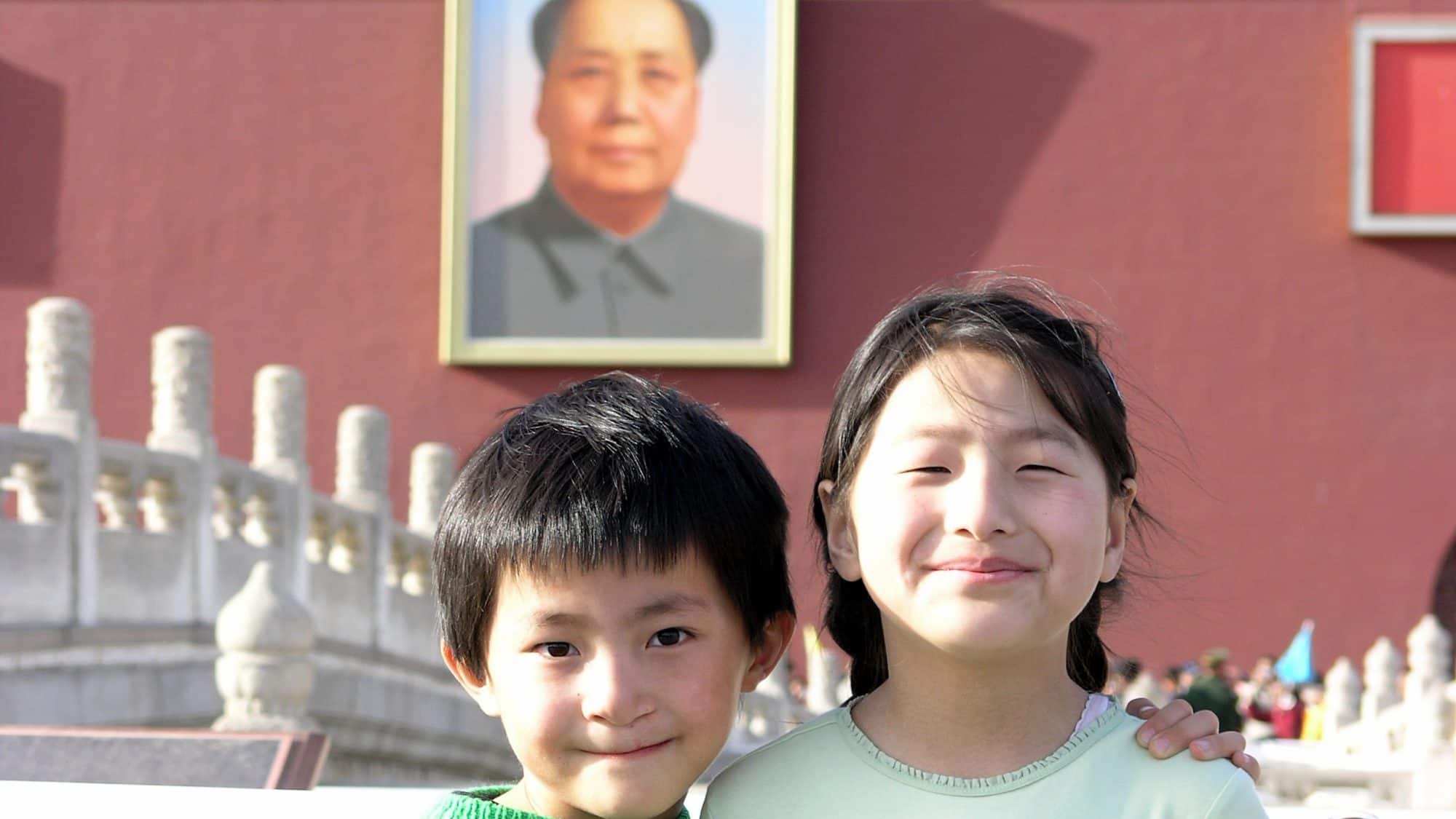 We arrived in sunny but cold Beijing and passed through passport control relatively quickly and collected our baggage. Thirty minutes after we’d landed, we were in a taxi and on our way to the hotel. The first thing you notice when arriving in Beijing is that there are people and cars everywhere. The traffic seemed even worse than on previous visits and as we neared the centre of town it all ground to a halt, and the rest of the trip to our hotel was at snail pace finally arriving at around 8:15am. As a sign of things to come, the taxi driver showed great interest in Daji and Yanmei, not least that we had two children (we tried to explain that we actually had three, but I think it was beyond his comprehension – or most likely our ability to explain). 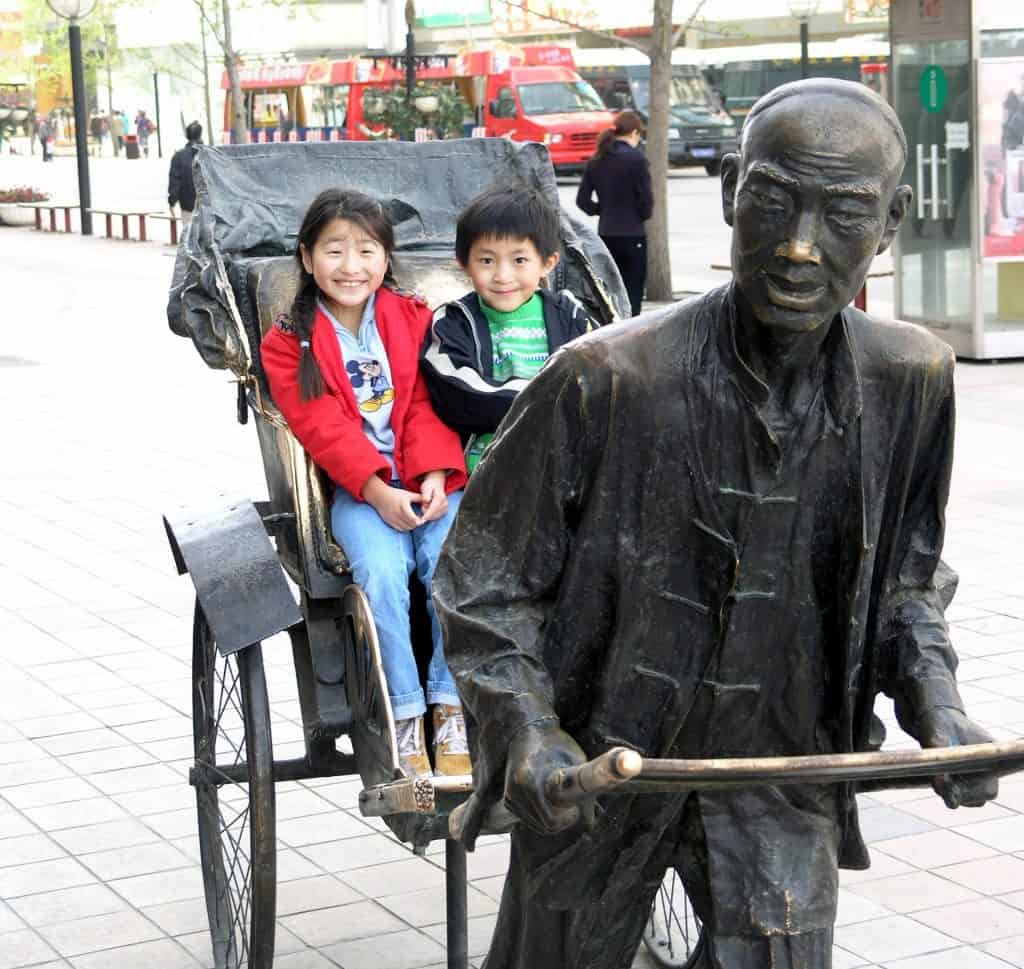 It was too early to check in, but we could leave our luggage and come back in a couple of hours. We went for a walk in the Hutong, buying date buns for breakfast from a “hole-in-the wall” which was actually a bakery and which had a long queue of Chinese outside. We made our way towards the centre of town, Wangfujing, the main shopping street (at least for tourists and wealthy Chinese) was just a 10-minute walk away. We strolled in the sun, watching Wangfujing come to life, visited the New China Children’s Toy World, to take Yanmei and Daji’s mind off how tired they were, took coffee and noted the difference between the tourist and the local Beijing – the buns had cost 2 yuan in total, whilst 2 coffees, an apple juice and two small cakes put us back 58 yuan! 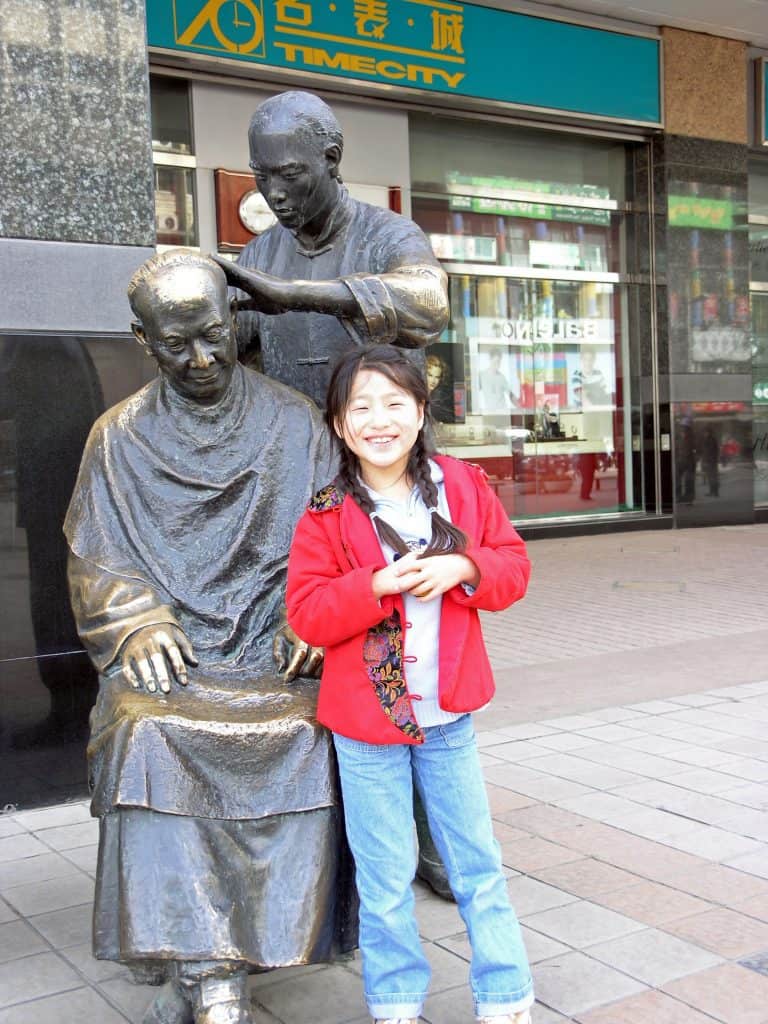 On Wangfujing there are bronze statues depicting different trades – a rickshaw, barber, children with shoes and a adults playing instruments. On both our previous visits to China we have taken pictures of Yanmei on the rickshaw, on both occasions she was very unhappy – this time we finally managed to get a good picture of a smiling Yanmei. 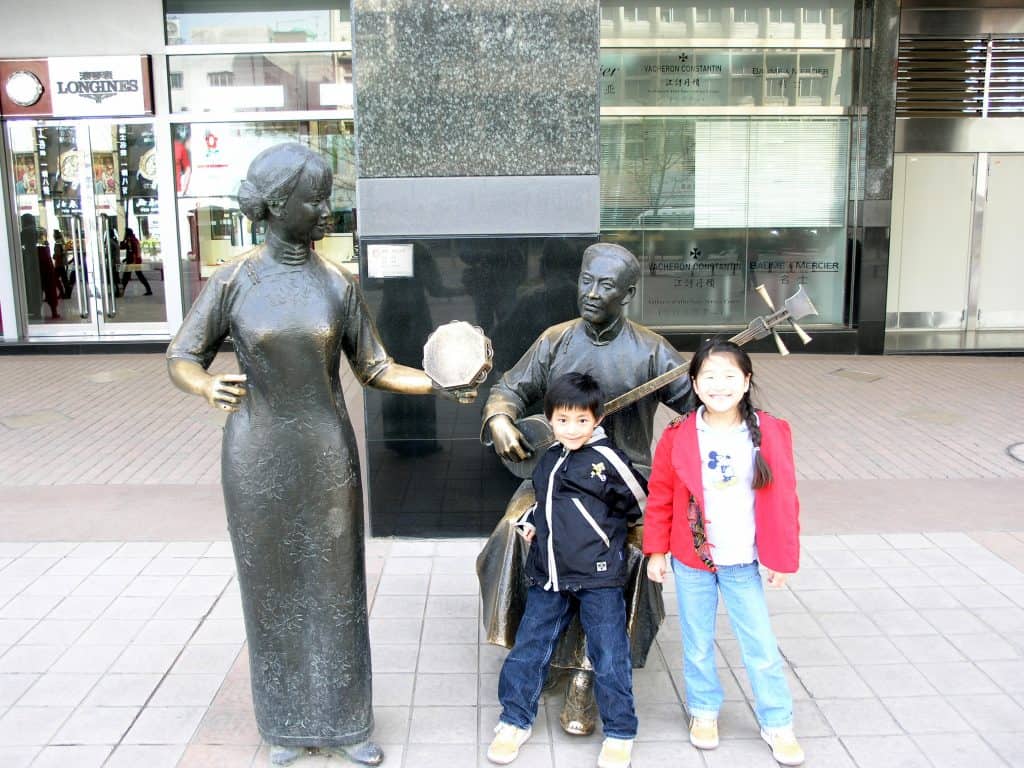 We reserved the first three nights at the Hao Yuan Hotel on the outskirts of Shijia Hutong. The hotel or guesthouse was built in the late period of the Qing Dynasty and is a typical Beijing courtyard house, with inner and outer courtyards and the rooms are spacious with traditional decor. Our room had a four poster bed and was in every way imaginable different than the standard western hotels that are popping up everywhere in Beijing as it prepares for the Olympic games (Beijing will supposedly build 110 hotels up to the games!). We strolled back to the hotel and our room was ready. The room was large (and cold), but we all slept immediately, waking mid-afternoon. Steven decided to shower, the water was only luke warm, so the others washed in hot water from the kettle. 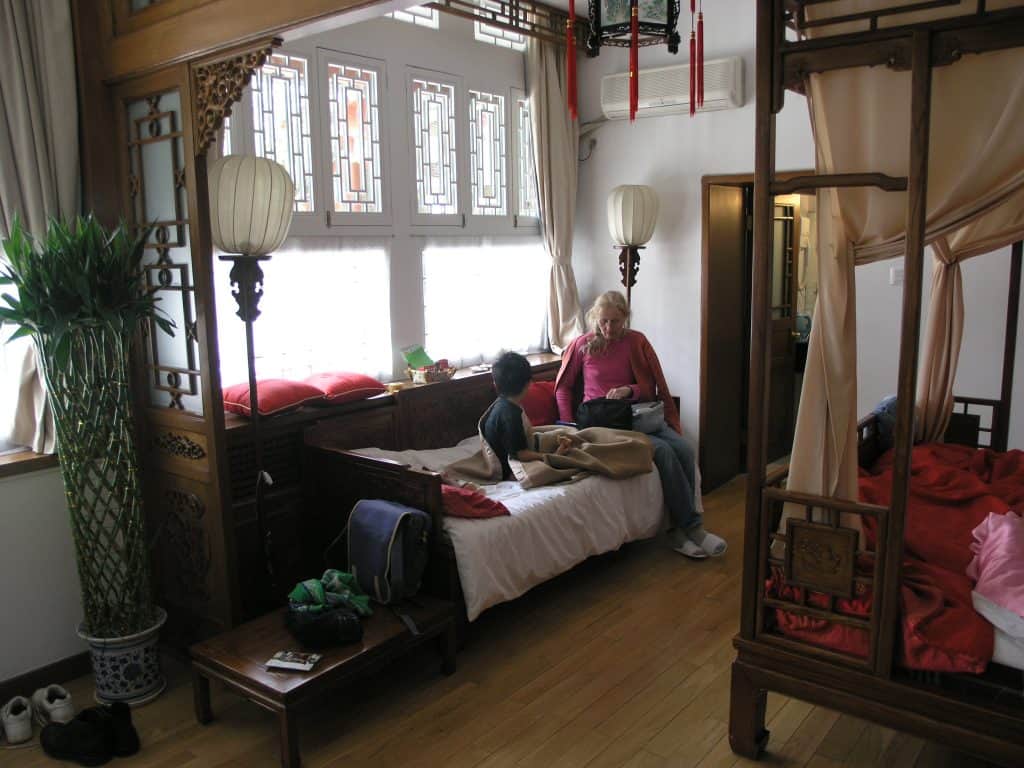 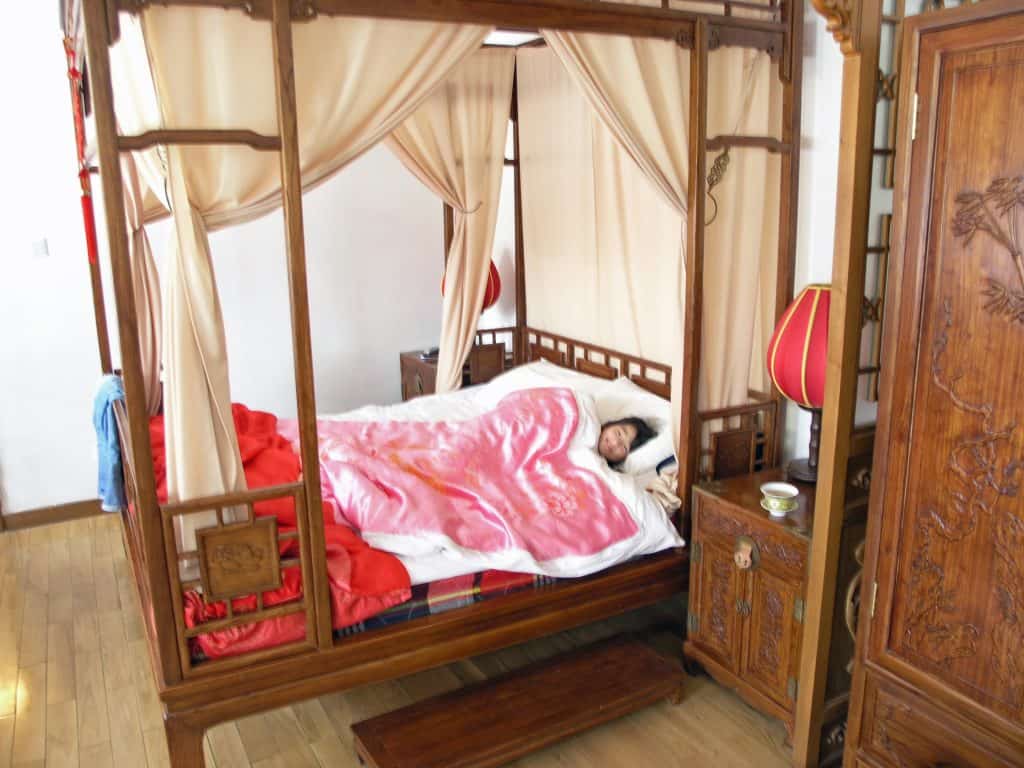 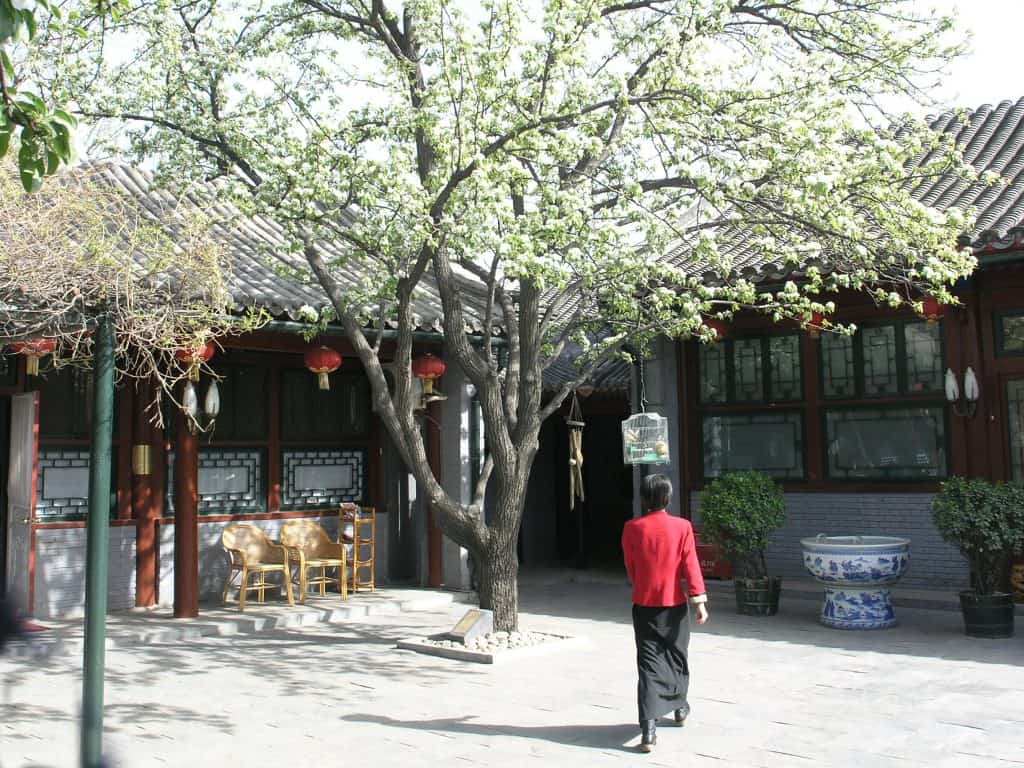 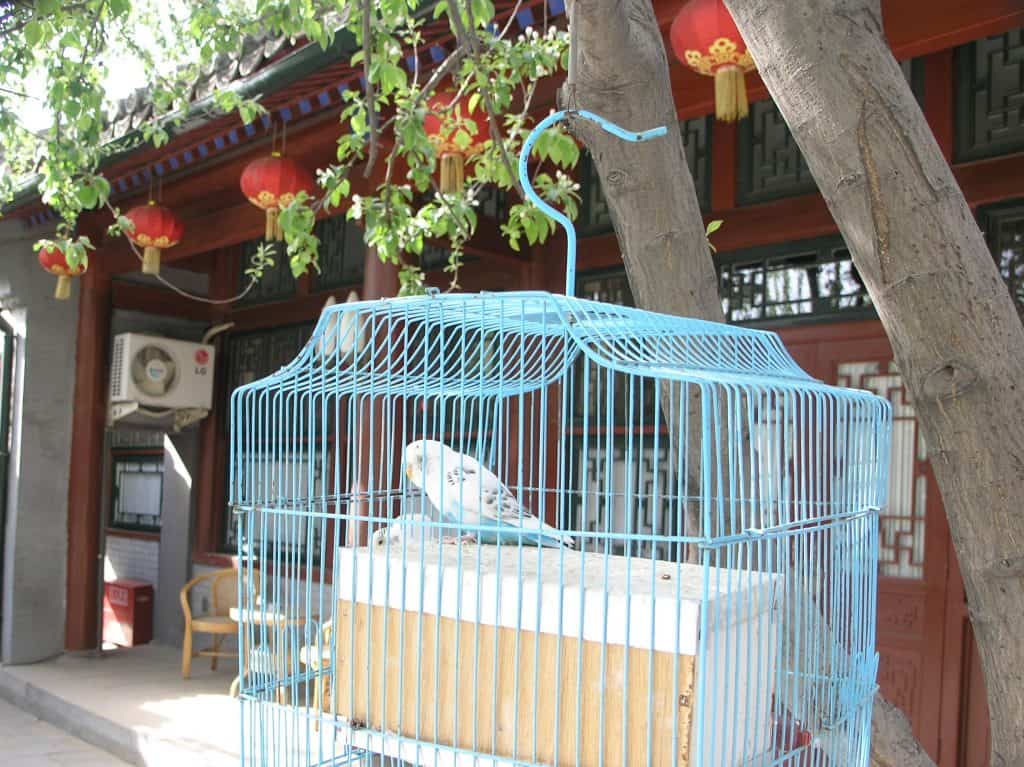 The weather was beautiful and we decided to walk towards Tiananmen Square, the worlds largest square and not least what must be the most photographed spot in the world, the world famous picture of Mao hanging on the Gate of Heavenly Peace. We walked past a massive glass fronted building – we have no idea what it is, but don’t remember it being there 4 years ago. 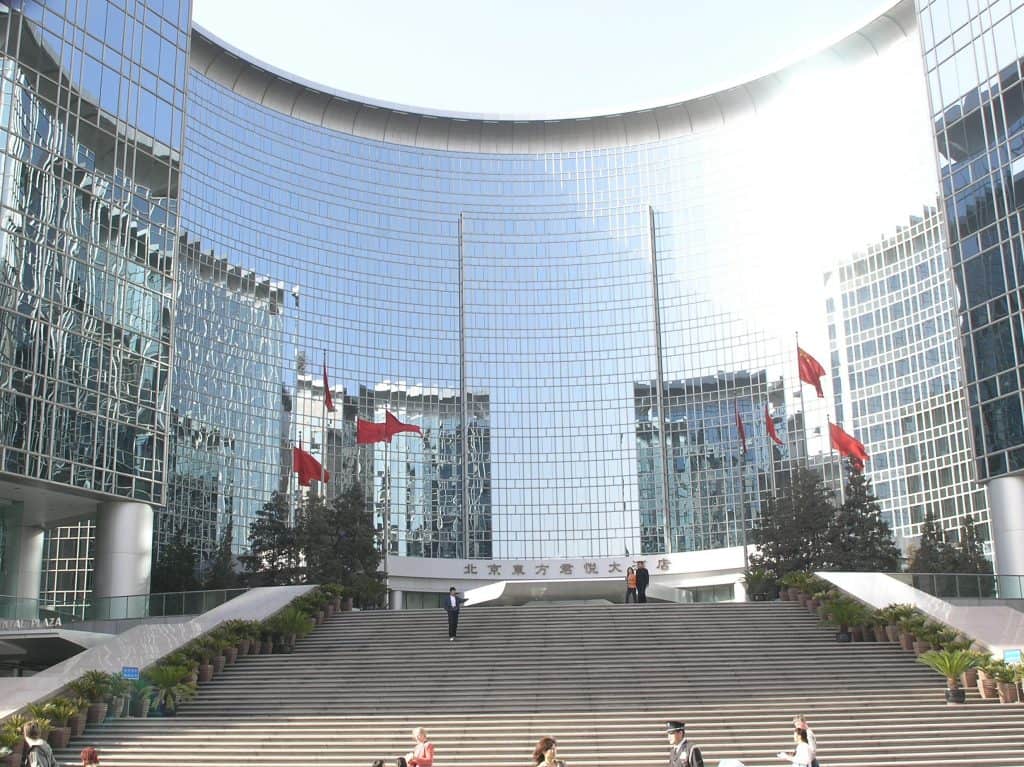 Hungry, we found yet another “hole in the wall” with a long queue and decided to stand in line. We ended up with 4 small “pizza” with meat and a strong dressing – the children loved them, and at 4 RMB each are real value for money. You get them in a paper bag so you can eat them whilst you walk along. 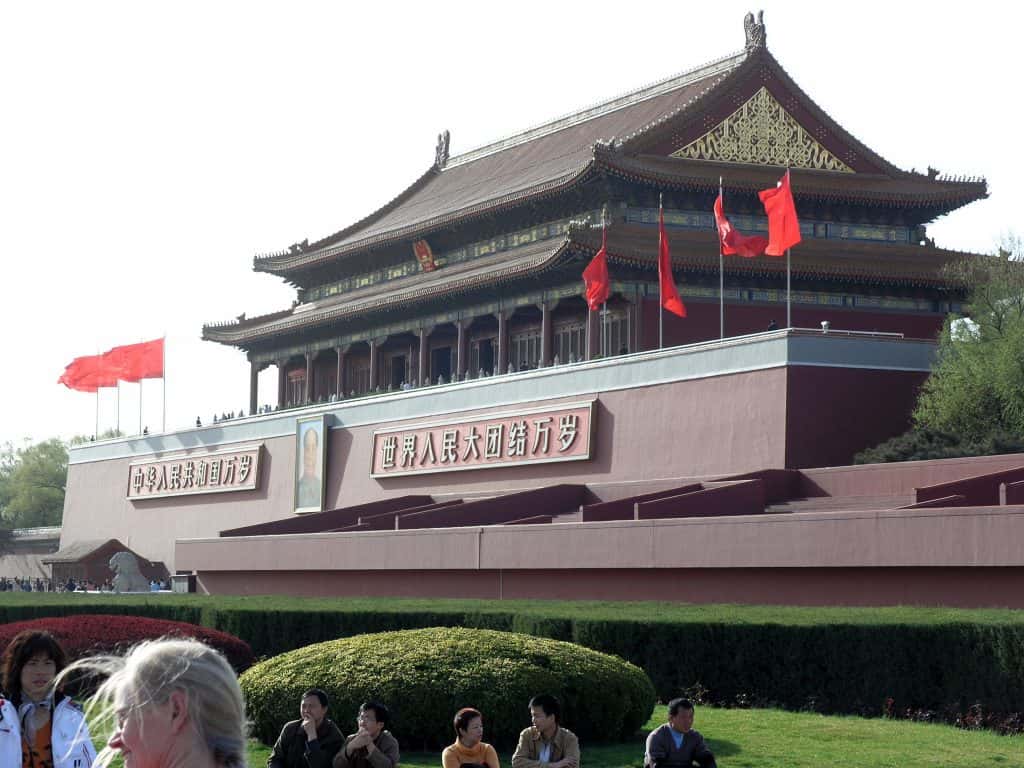 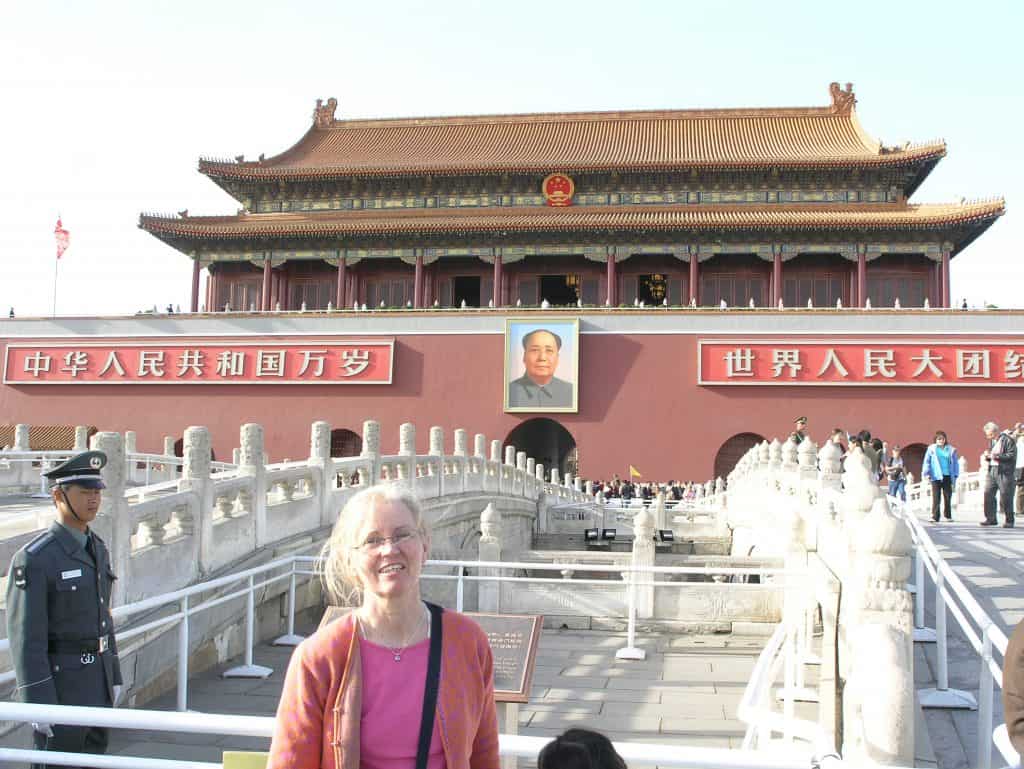 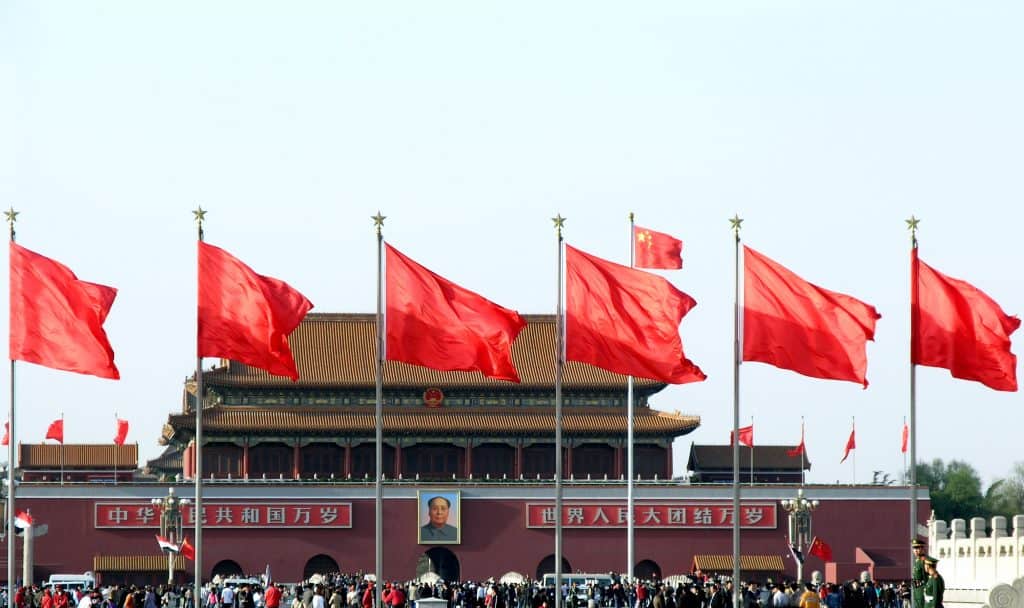 We walked to Tiananmen Square, took the obligatory picture with Mao (not the last time during the holiday) and walked across the square towards the mausoleum, which was closed, watched the kites and the red flags blowing in the wind (each time we went past the square, the flags were blowing in the wind, no matter the weather!). We captured a cyclist passing the square – now it almost solely cars that pass the square, six years ago, it was mostly bicycles. 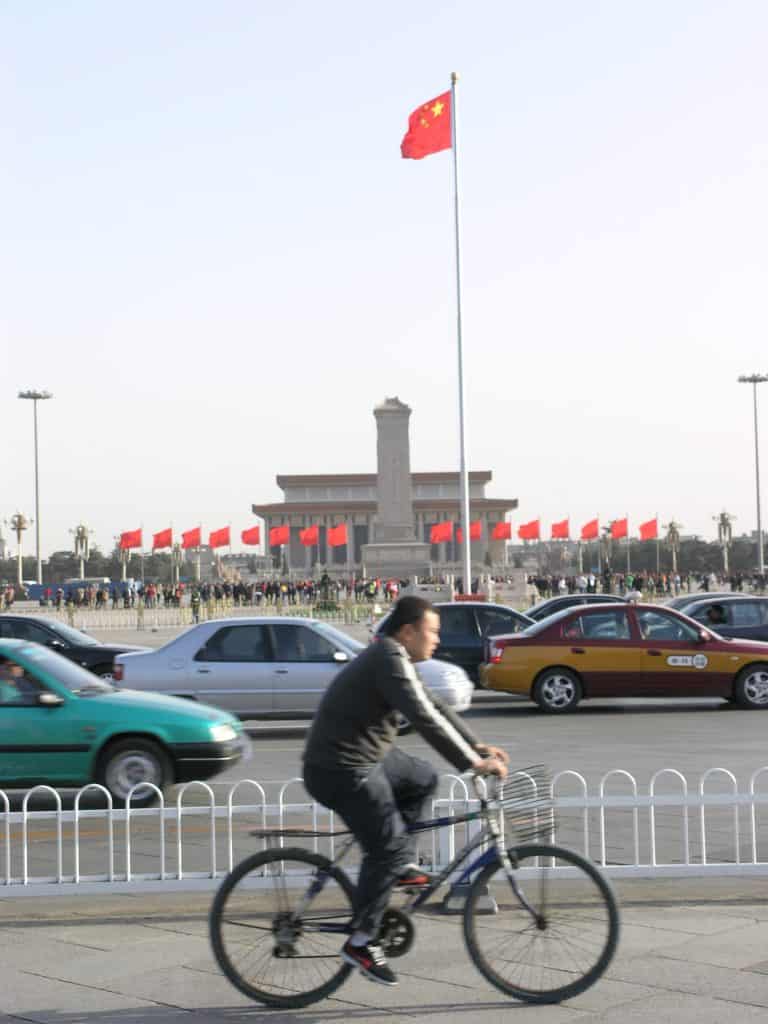 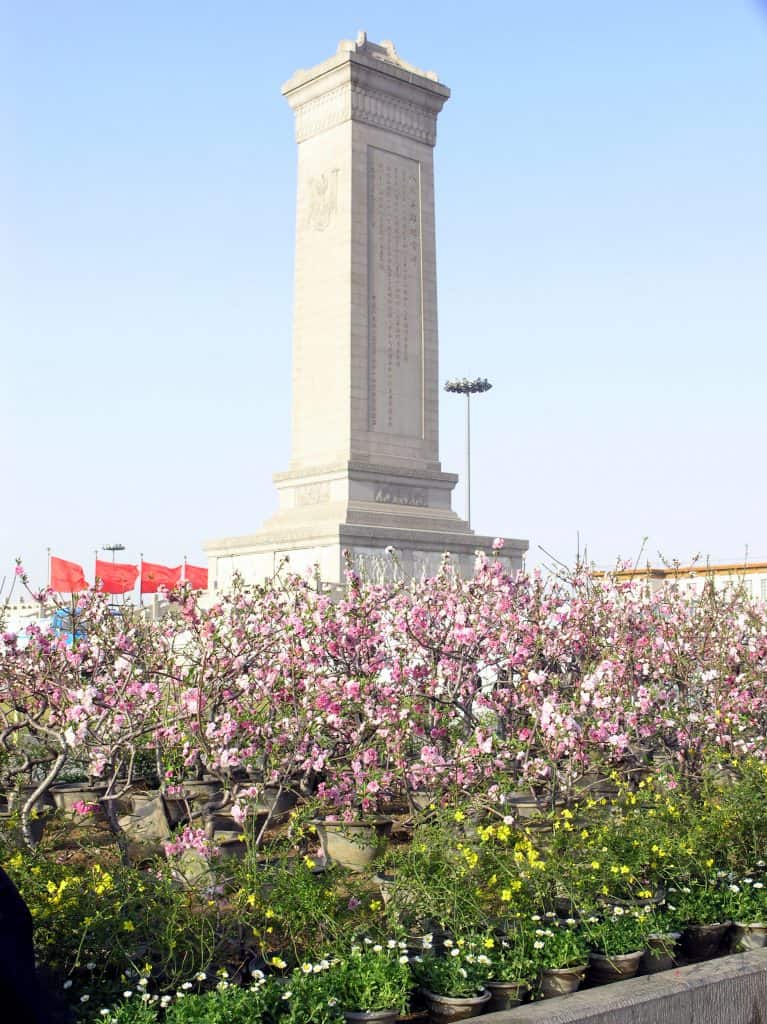 We took a rest enjoying the spring weather, and took a look at Monument of the People’s Hero’s, an obelisk in the centre of the square. Walking across the square we meet a Danish-Chinese family, two sisters and children were visiting their brother who still lived in Beijing. 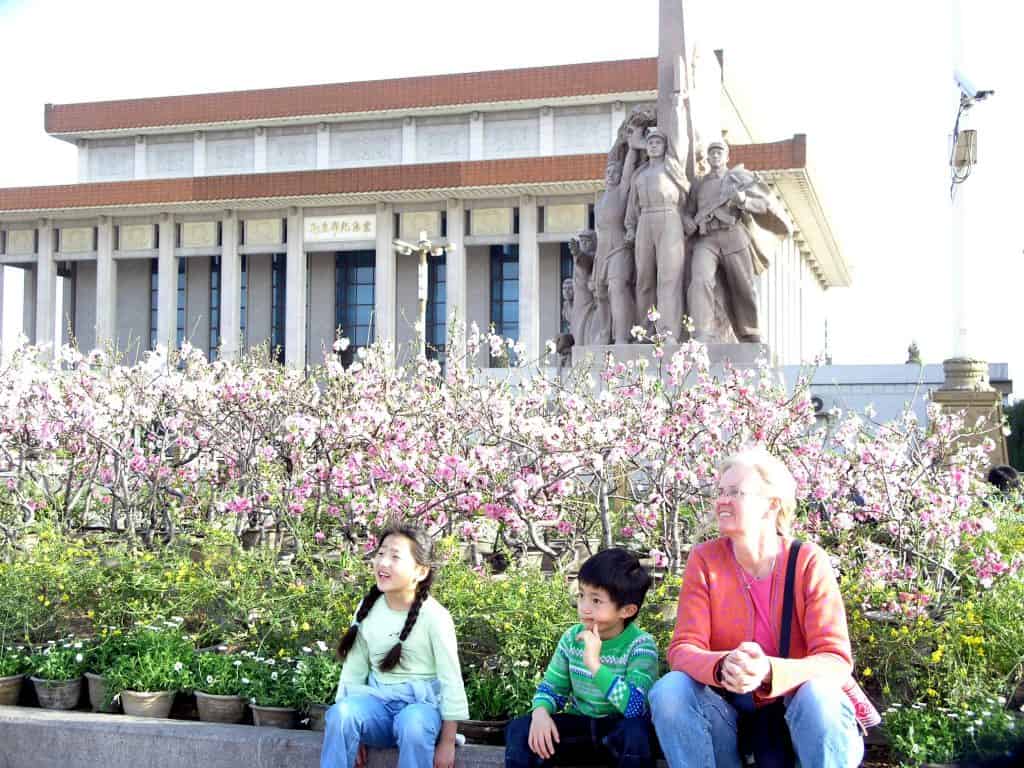 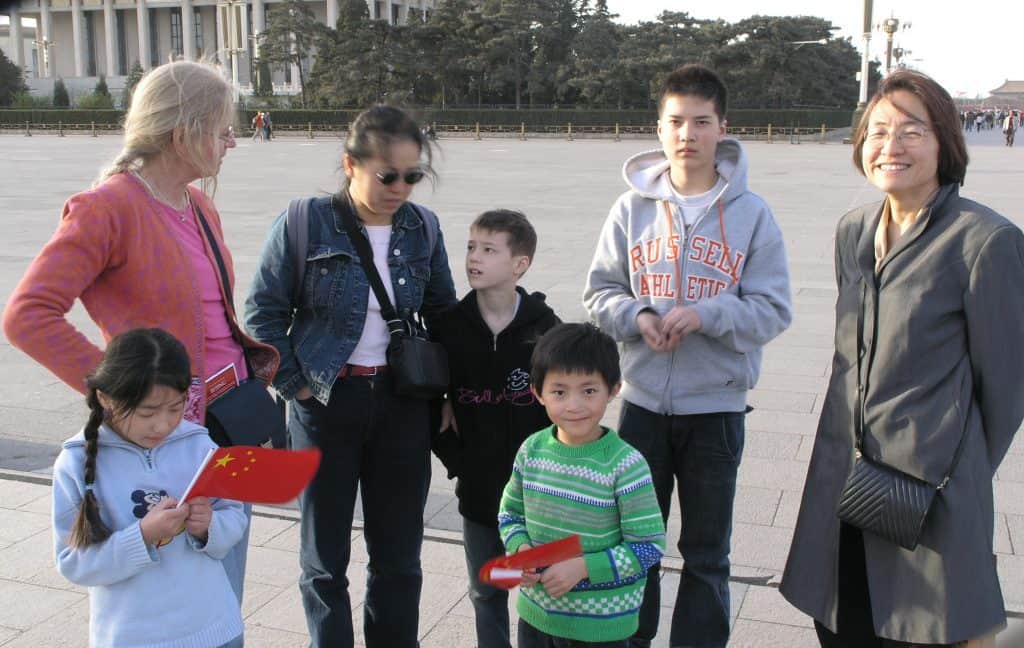 Another monument celebrating the revolution on Tiananmen Square. 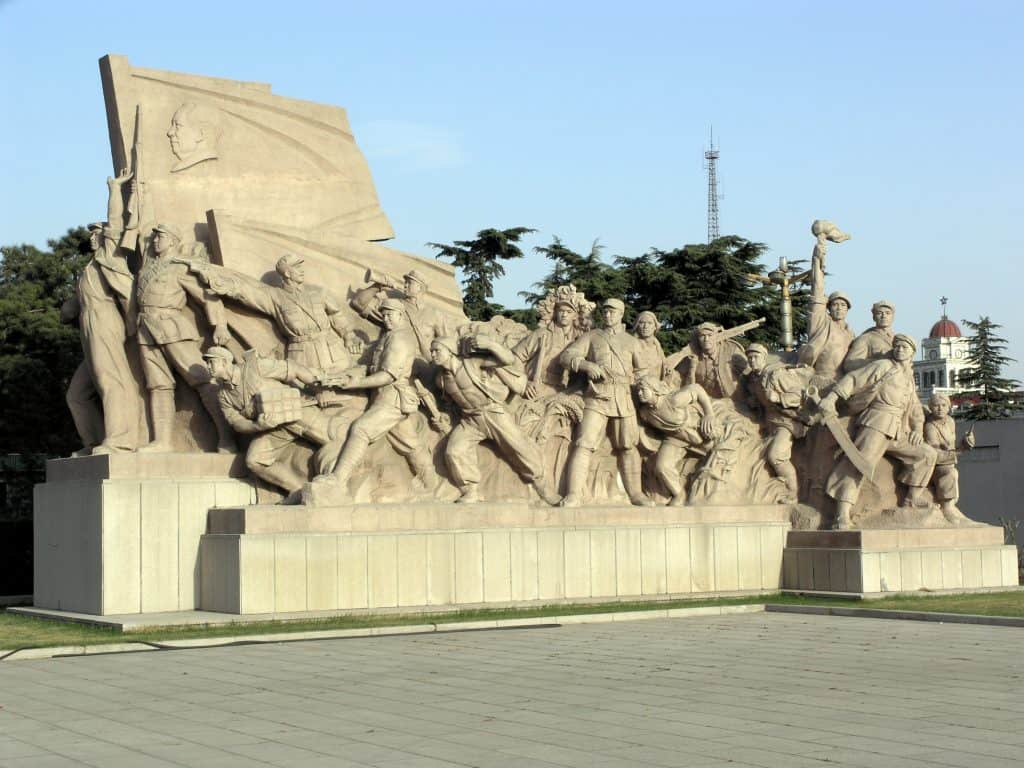 We slowly started the walk back to the hotel, enjoying the beautiful weather and watching life go on around us. We weren’t feeling particularly adventurous so we visited the food court on the ground floor of the Oriental Plaza Shopping Mall and ate Korean noodle soup. We were tired – not least Daji. 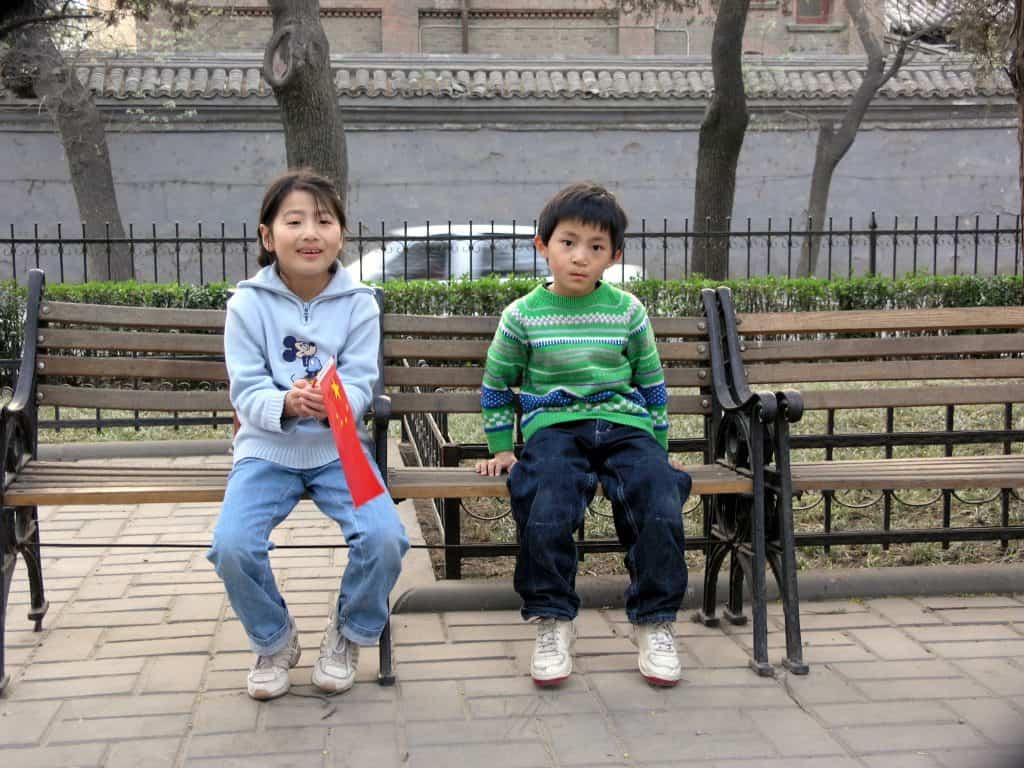 We made our way back to the hotel, it was dark now and getting cold. We all went straight to bed and slept – waking next morning, fully adapted to Chinese time. 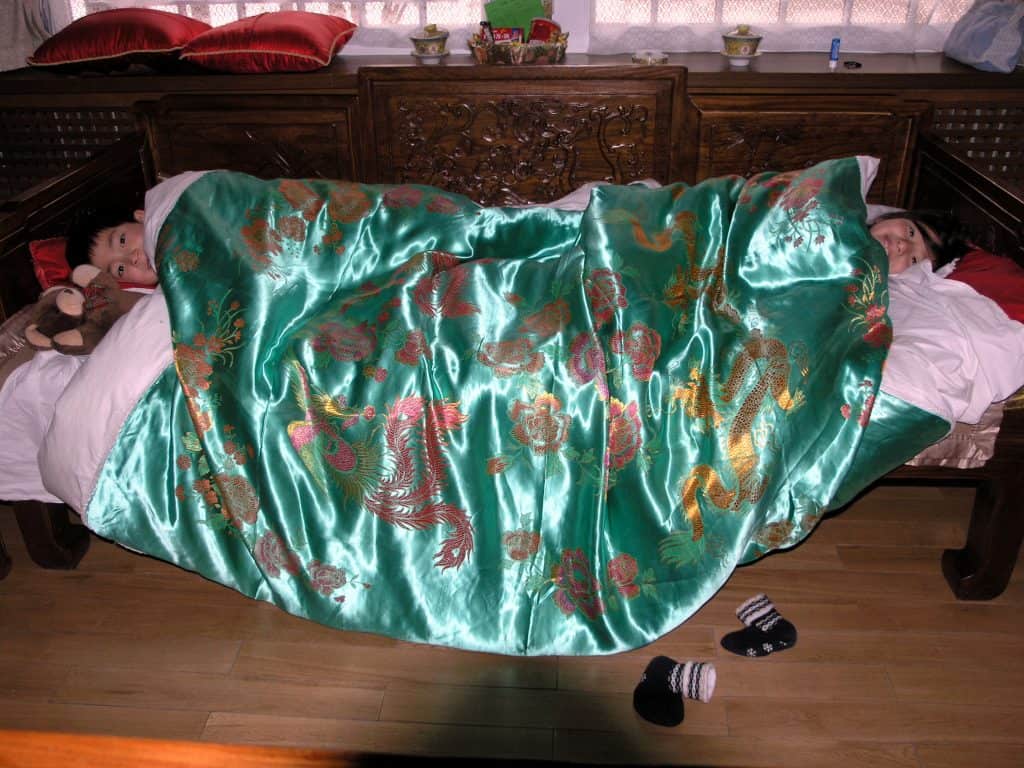