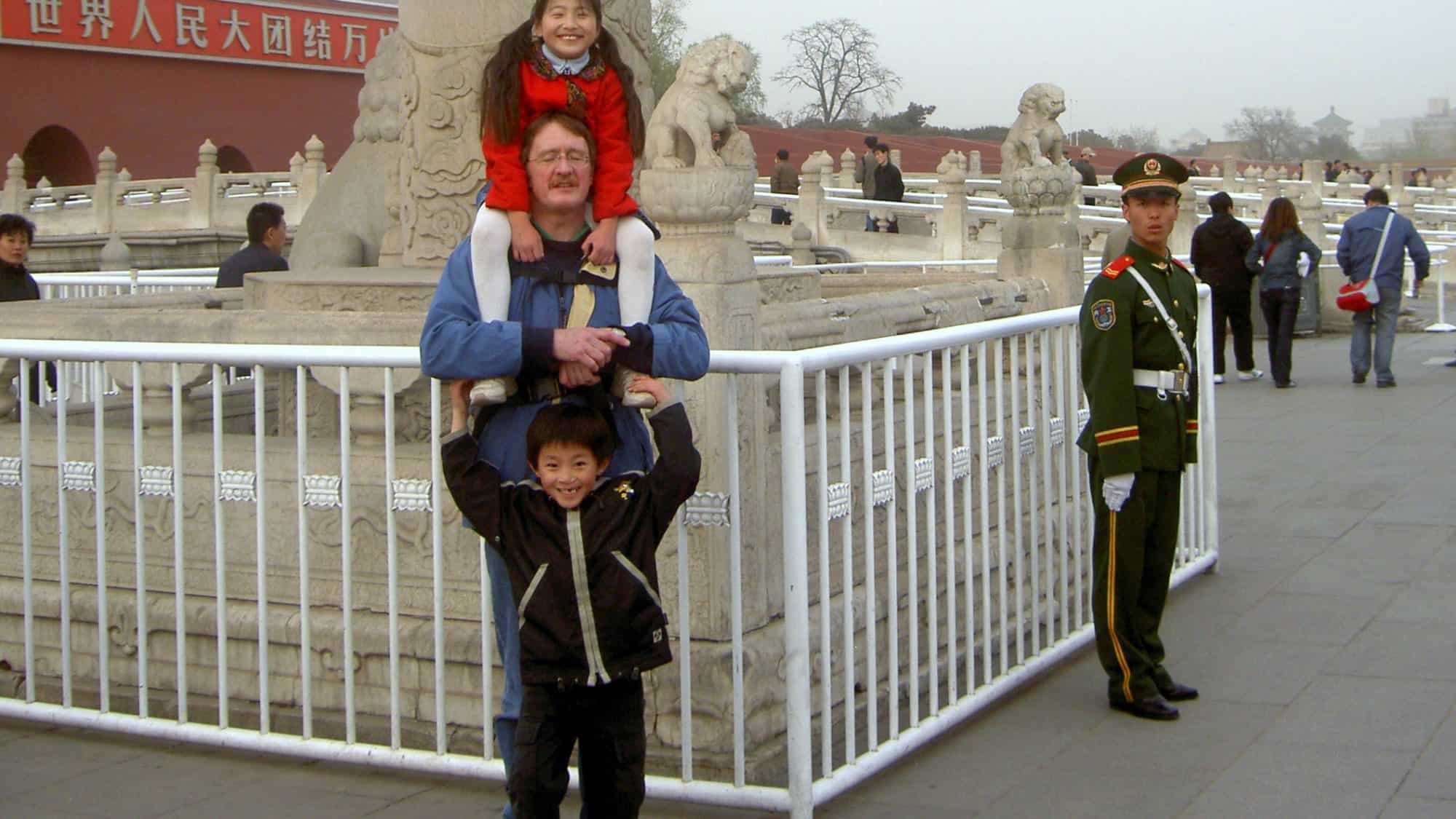 We woke relatively early and bathed (the water was still only luke warm – brrrrr) and breakfasted at the hotel. The weather had taken a change for the colder. We hailed a taxi and took off for the Temple Of Heaven (Tiantan). More park than temple, the temple was built in 1420 as a stage for the solemn rites performed by the Son of Heaven (the emperor), who came here to pray for good harvests, to seek divine approval and to atone for the sins of the people. 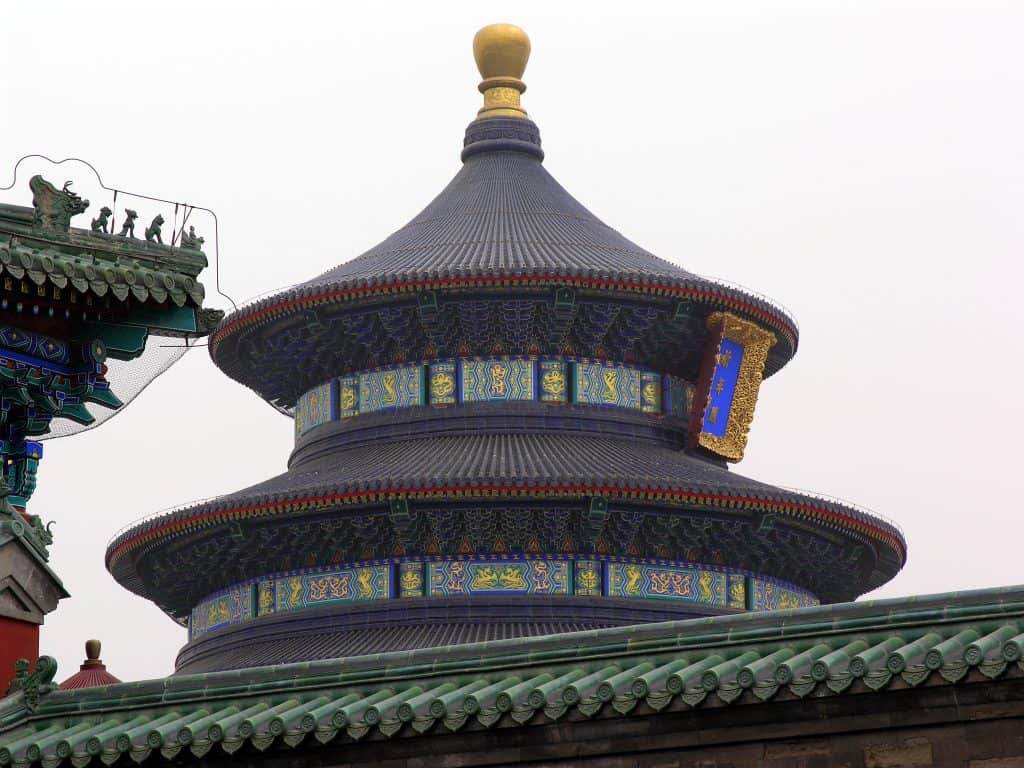 The most significant ceremony took place just before the winter solstice, when the emperor and his enormous entourage made their way, in total silence, from the Forbidden City to the temple where on the three tired alter (symbolising earth, man and heaven and where the centre stone in top tier marks the centre of the earth, according to Chinese) read sacred prayers of indulgence and purified himself in the Hall of Abstinence by fasting from meat, alcohol, women, music and work. The Chinese and tourist stand in line to stand on the stone at the centre of the earth. 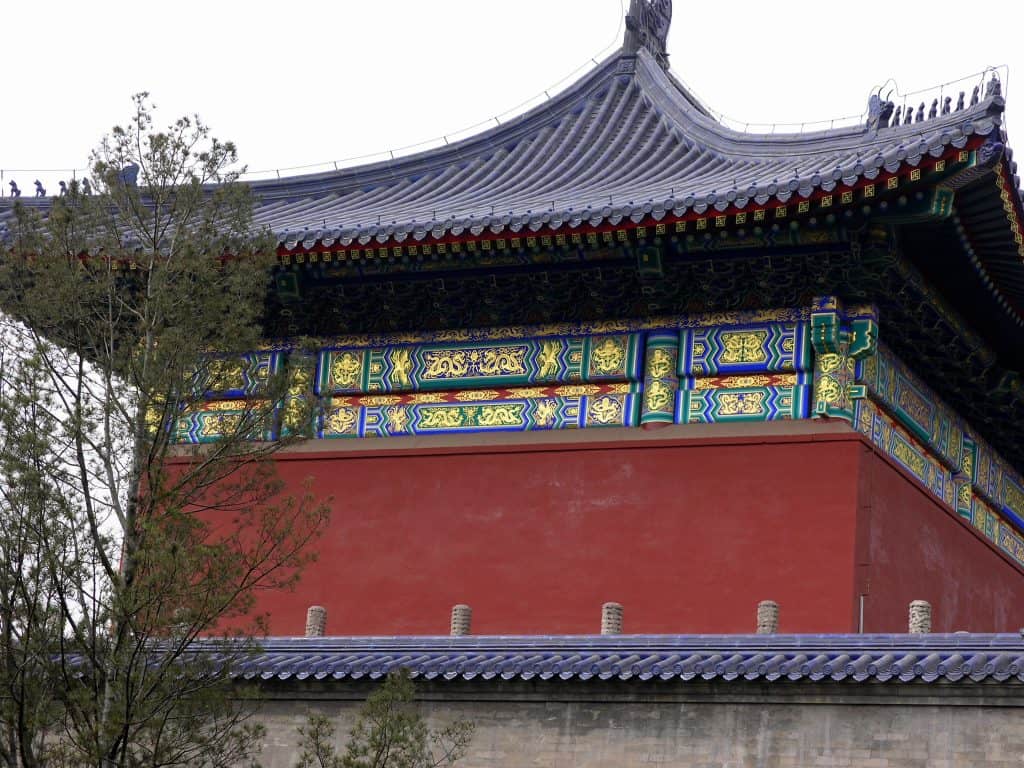 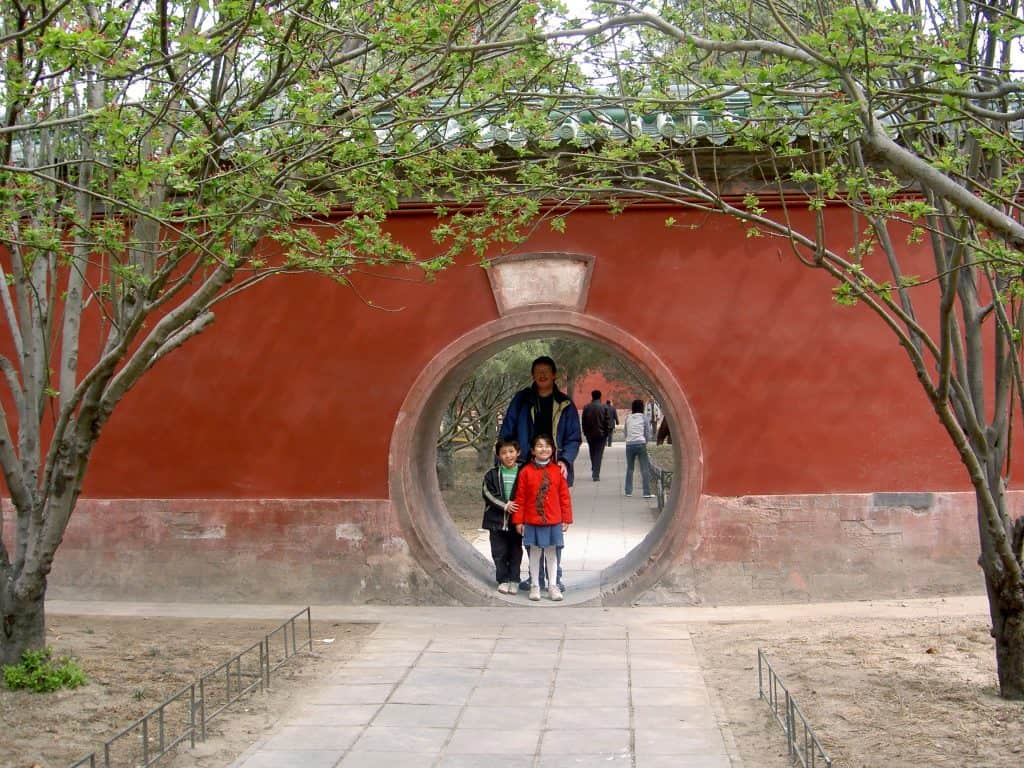 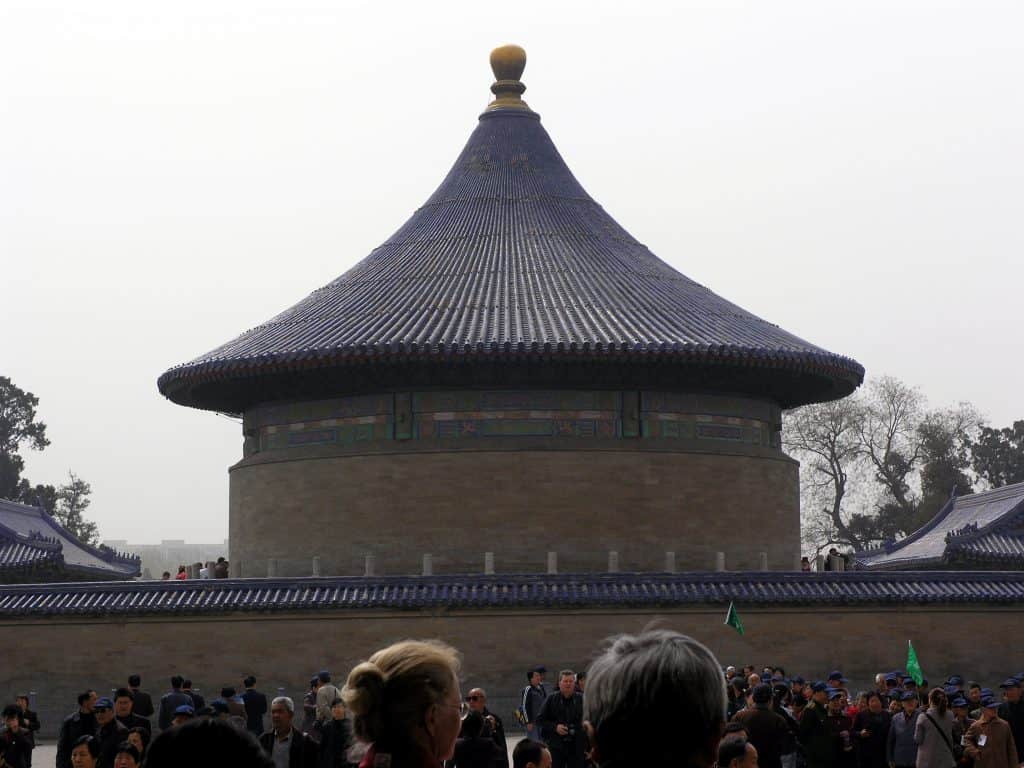 The park also contains the Imperial Vault of Heaven which is surrounded by the echo wall, a perfect half circle, where a whisper at one end is carried around to the other side – but there is little hope of you ever hearing it with the amount of Chinese and foreign tourists trying to be heard. Likewise at the foot of the staircase to the vault are the triple-sounds stones, where you can clap your hands on the first stone and hear one echo, hear two echo’s from the second stone and hear three echo’s from the third stone – perhaps on a quiet day. 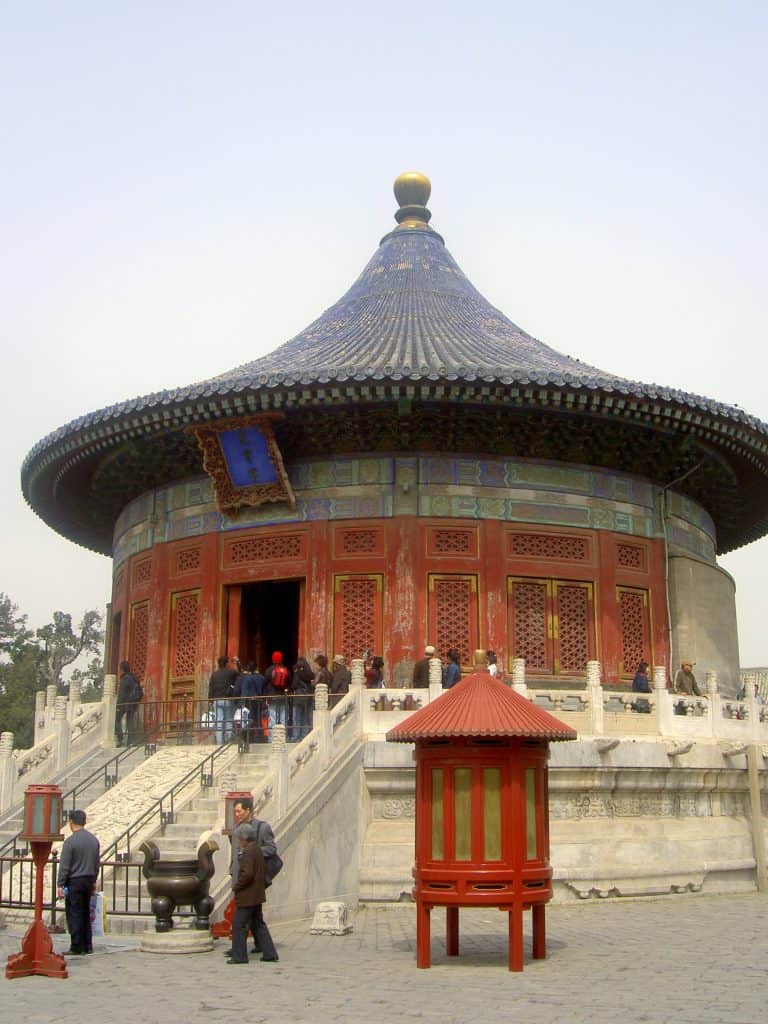 The most magnificent building in the temple is the round Hall of Prayer for Good Harvests, mounted on a three tiered marble terrace and decorated in blue, yellow and green tiles representing heaven, earth and the mortal world. This was our primary reason to visit the park, but unfortunately was the first of many disappointments in the coming days as Beijing undergoes a total renovation, closing many of the sites in order to be renovated prior to the Olympics. 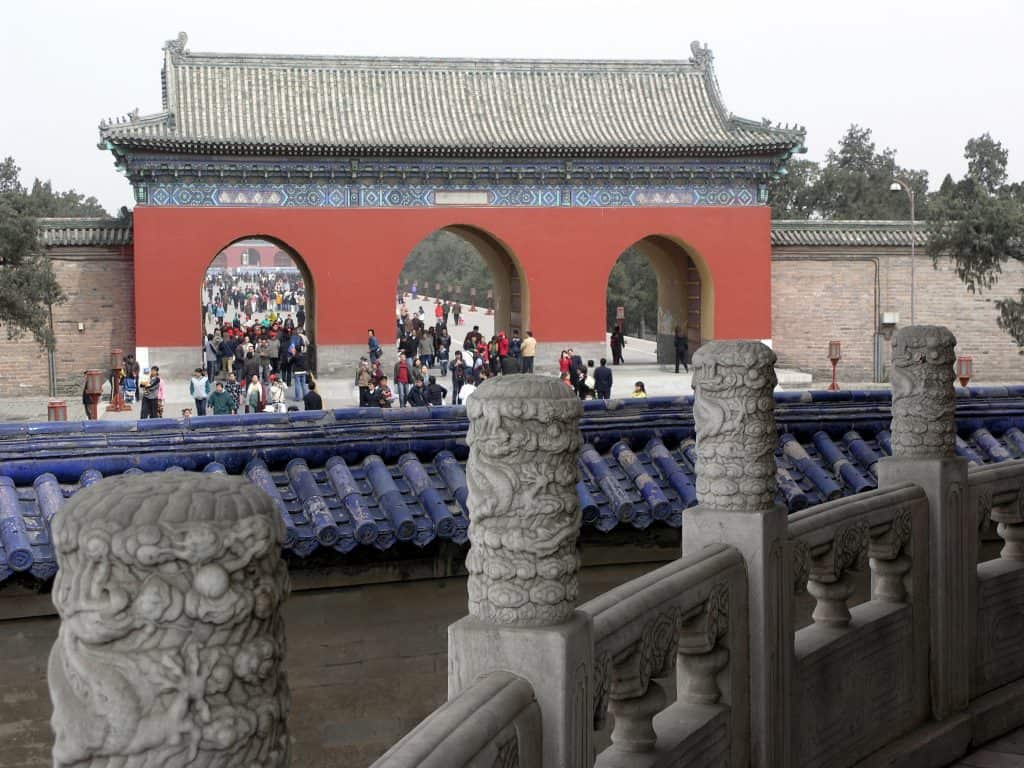 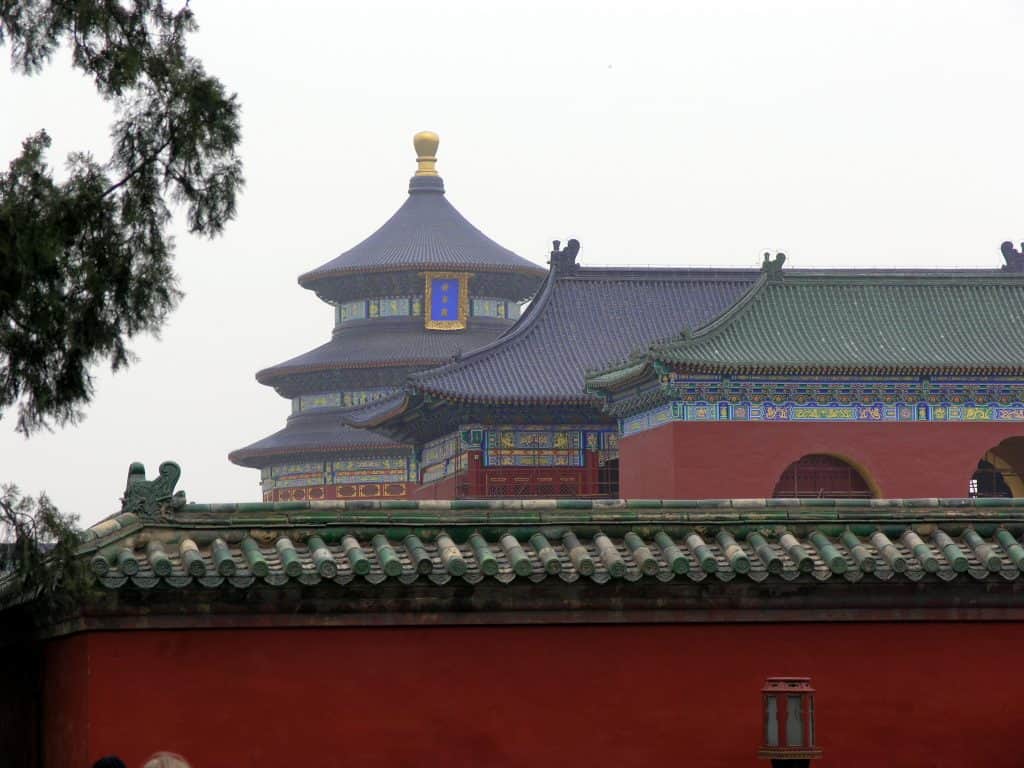 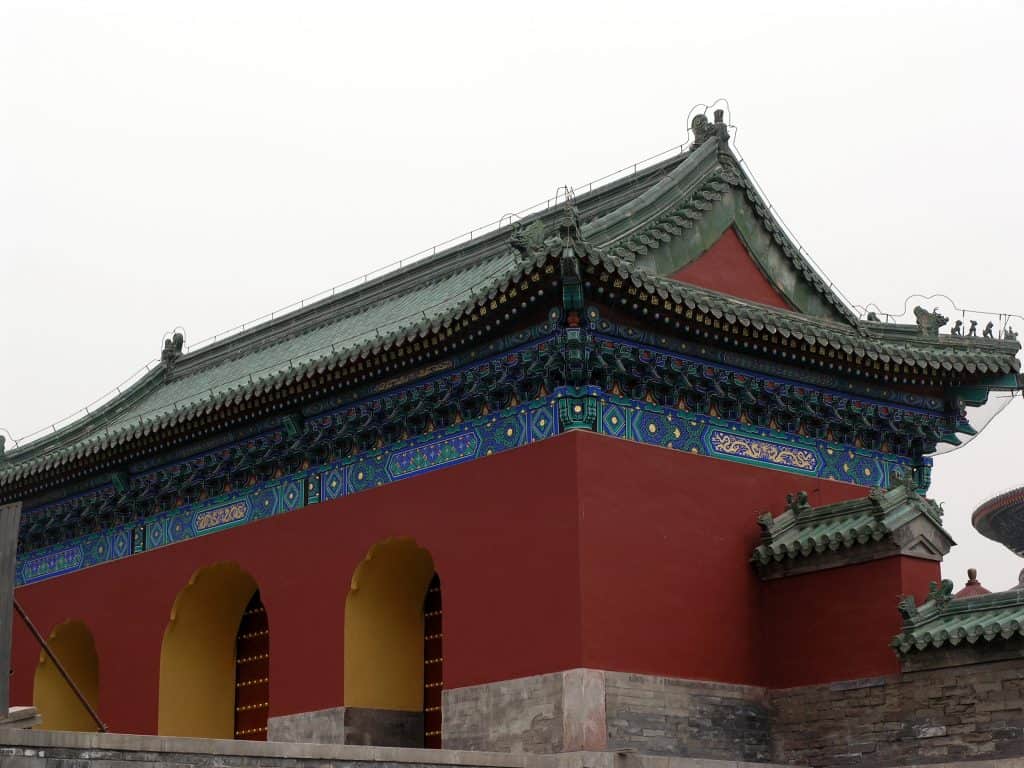 Despite the disappointment, the Temple of Heaven still turned out to be one of our best experiences whilst in Beijing. The park was packed with Chinese families playing badminton, dancing, singing, playing instruments, cards, checkers and chess and not least different forms of Taichi. The Chinese are exhibitionists and love to get up and sing, dance with bands seeming created based on who happens to be around at the time. The crowds gather round and the atmosphere is extremely positive. This is really a must for any tourist in Beijing, and remember the video camera. 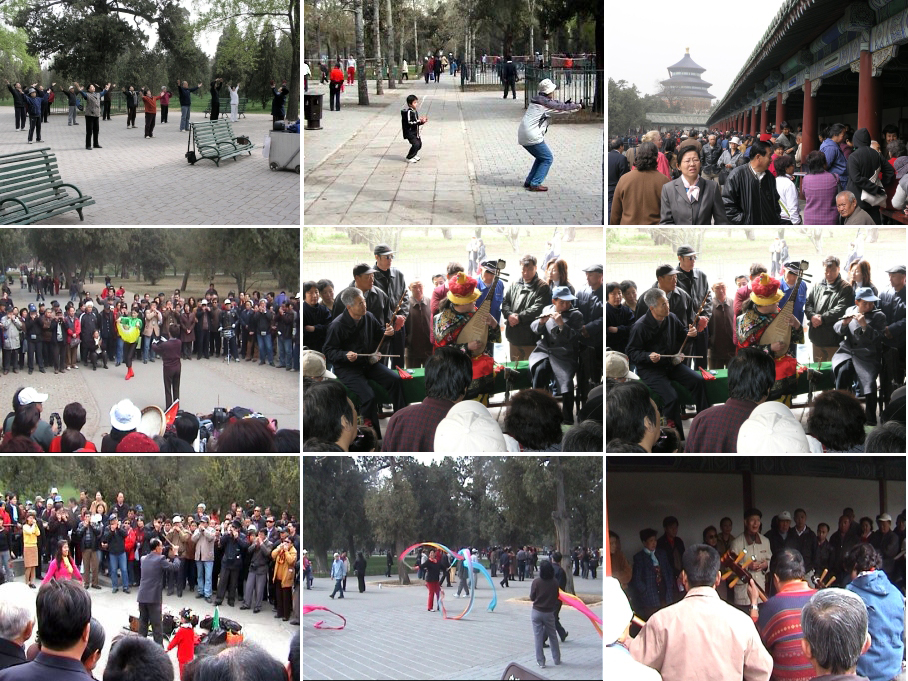 In the middle of the stone alter there is a stone that the Chinese stand on and say something, the Heaven Heart Stone. People stand on this stone to make wishes to heaven. But during the Ming Dynasty, this stone was where an orator would stand during the sacrifice ceremonies and where the Emperor would pray during the rain prayer ceremonies. Due to the acoustical setup of the site, the person who is standing on the stone’s voice will be amplified. We started watching and wondering what everybody was doing, and then Yanmei and Daji joined the line. 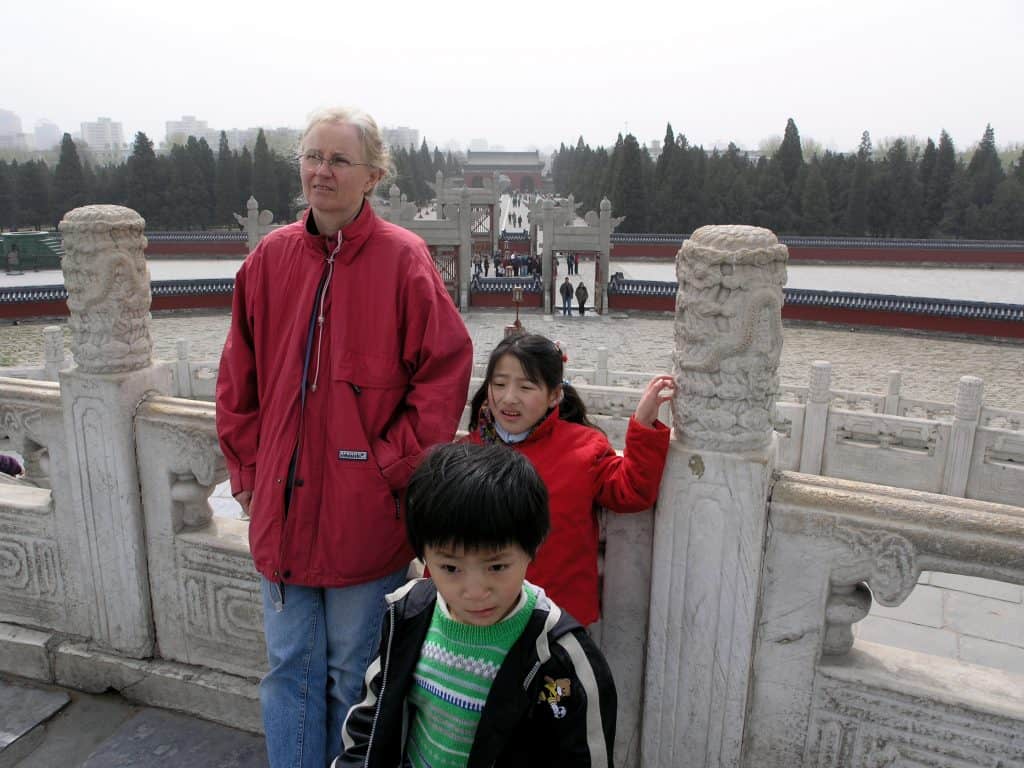 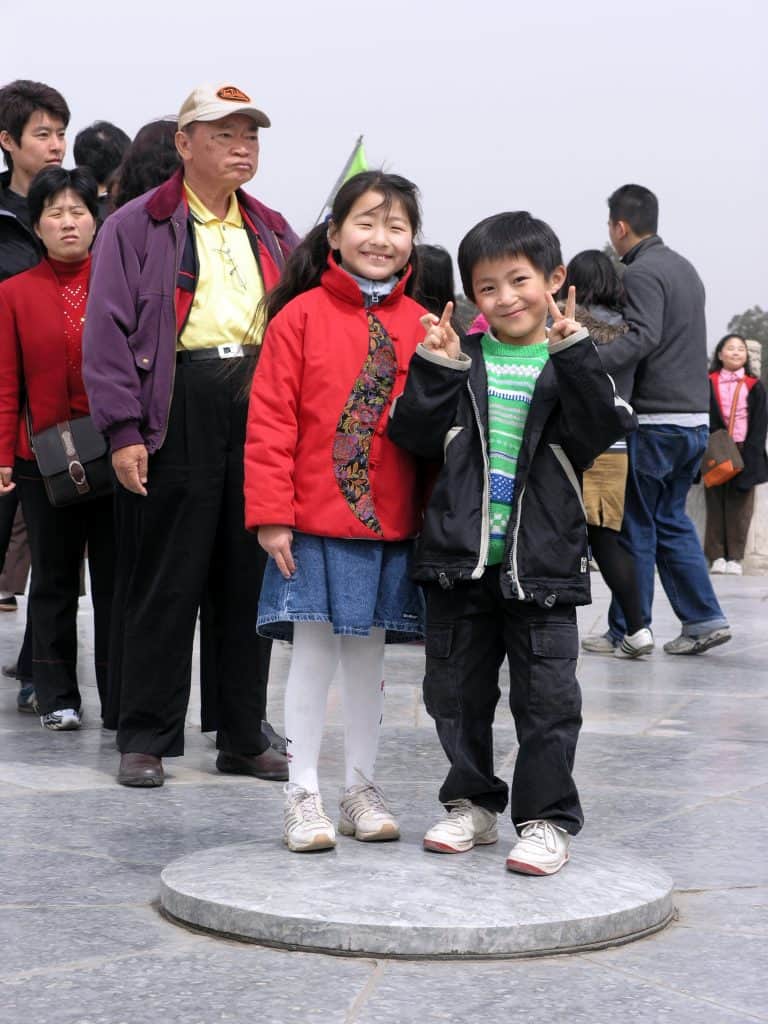 Another big hit in the park was the exercise ground. These are primarily meant for adults to exercise (outdoors workout), but for Yanmei and Daji this was like a different kind of children’s playground. These were spread throughout Beijing (and the rest of the cities we visited), and I don’t think we were ever allowed to walk past one of them without Yanmei and Daji “working out”. 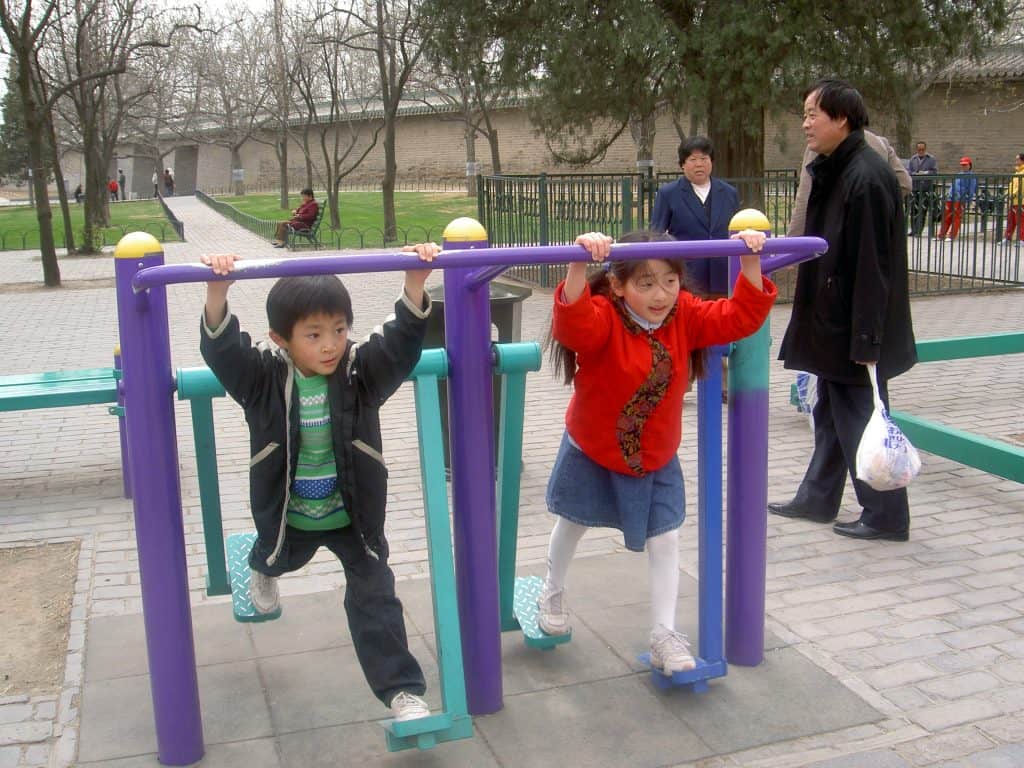 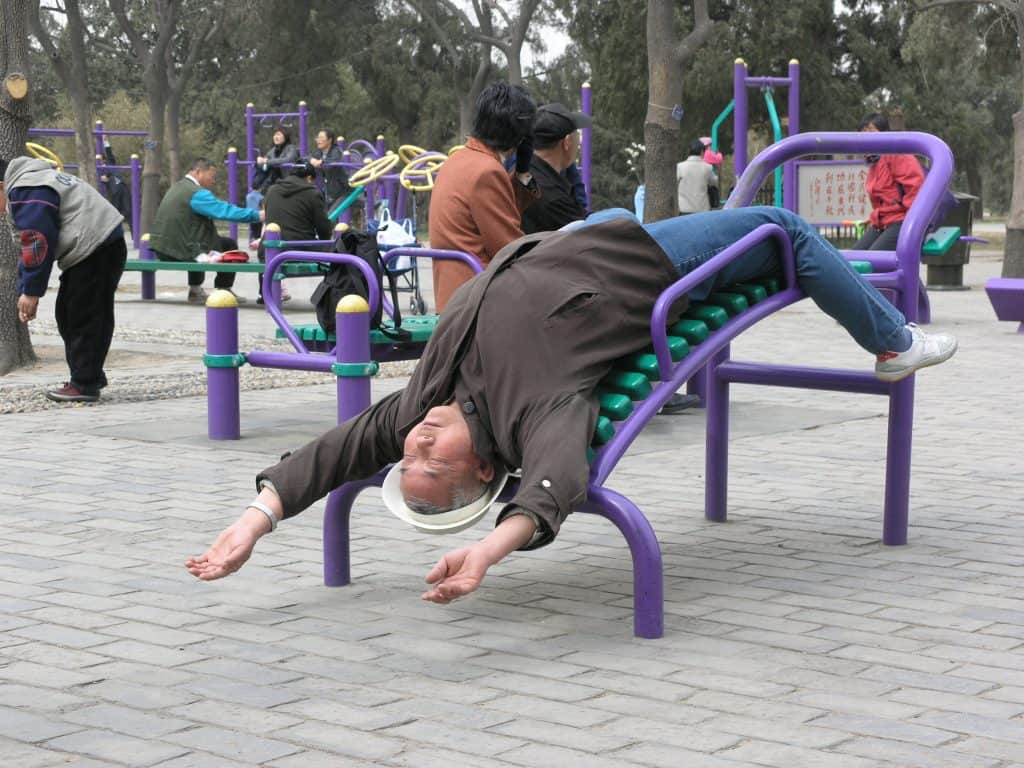 We left the Temple Park in the early afternoon via the “Heavenly West Gate” and walked north. We entered what we thought was a supermarket thinking we could find something to eat, only to find that it was a massive shoe store (and I mean massive). Lene just had time to purchase a pair of shoes before we carried on north past all the small shops before we again found a “hole in the wall” with a queue of people outside. This time we bought a kind of omelette with lettuce in – 8 yuan and tasted excellent. We stopped at a tea store, and bought two Chinese tea cups and were invited to join the two girls in the shop for tea. This was a busy area, with lots of local shops and no tourists. 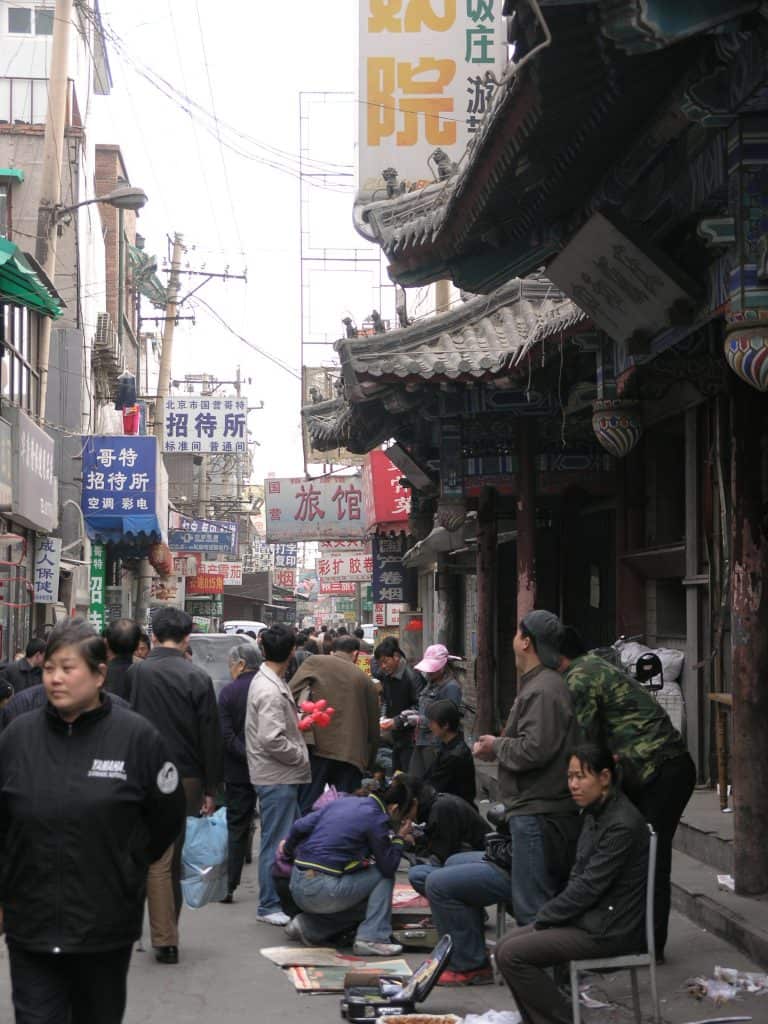 We turned west onto Da Zhalan, “the proletarian version of Wangfujing” a busy pedestrian street with some of Beijing oldest retailers including Ruifuxiang Choubu Dian, one of Beijing oldest silk merchants where Lene bought a silk jacket and cardigan, Yanmei a silk dress and Daji a silk jacket (I think he looks like a waiter with it on, but he’s happy!). 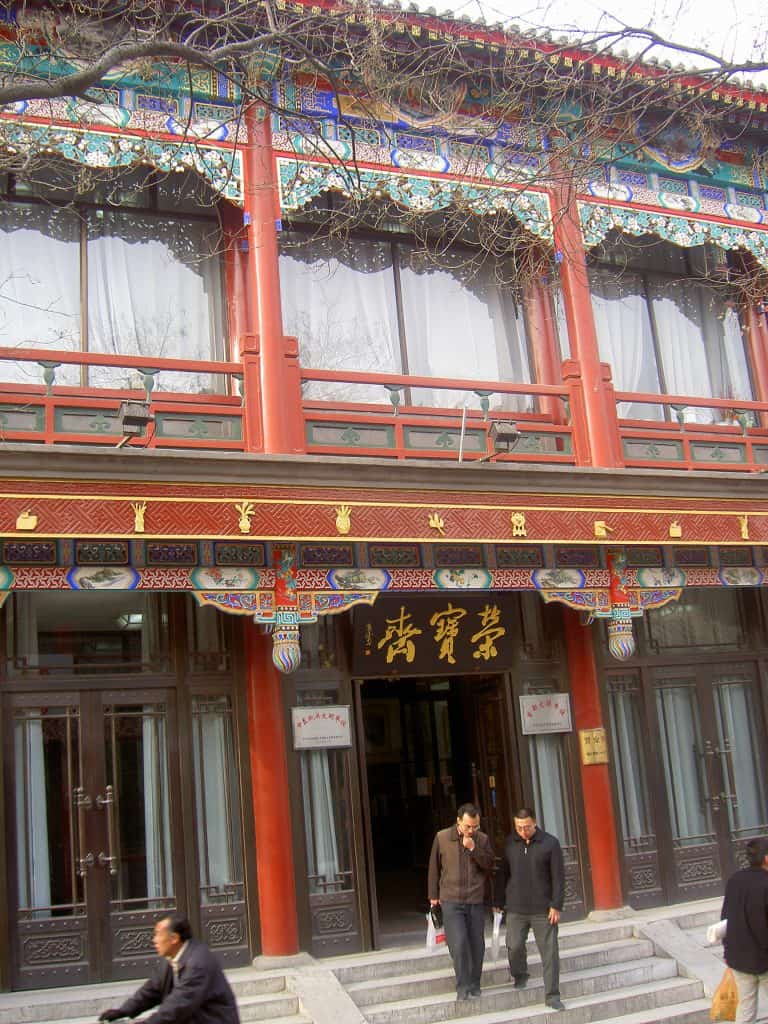 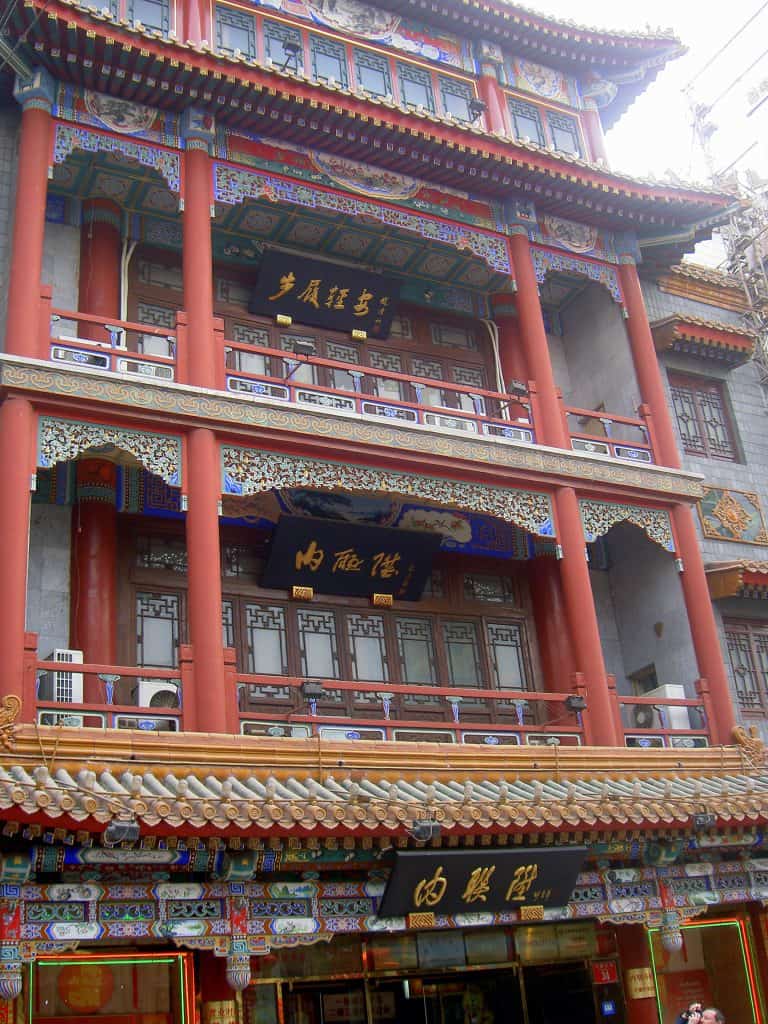 We continued west through some of the surrounding Hutongs until we arrived at Liulichang Xi Jie with its beautiful buildings and many art and bookstores. We headed north and the east back towards Tiananmem Square (and more pictures of Mao) and immediately after the square, on the north side, turned onto Changpuheyan (which runs parallel with the main road behind the wall), where a landscaped path runs along a small river, and is far more peaceful than the noise of the main road. 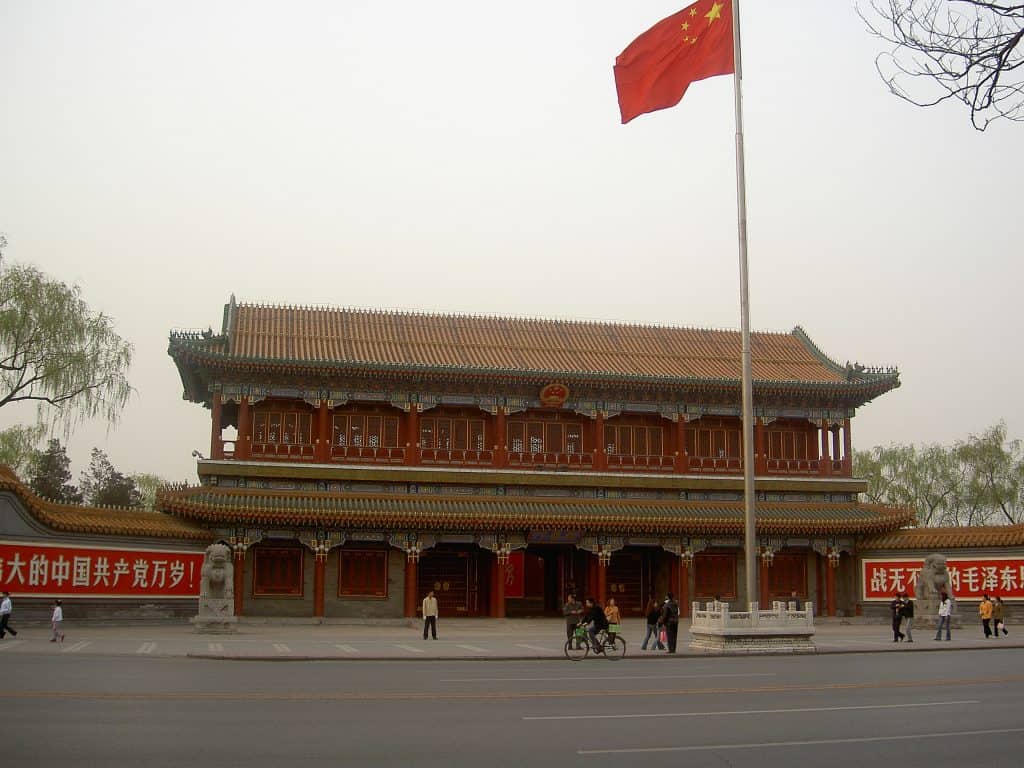 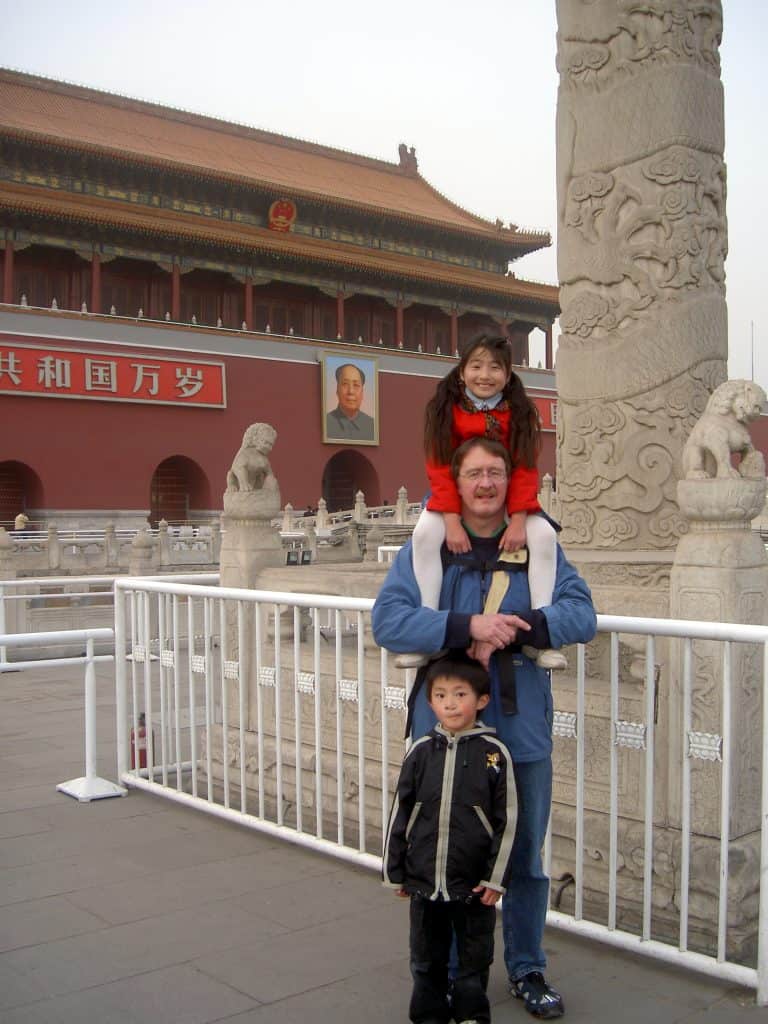 It had been a long day and we decided again to take the easy way out and eat at the food court in the Oriental Plaza. This time we at least eat Chinese. We rounded the day off with ice cream from McDonald’s and a bottle of Chinese wine from the local supermarket – when we were back at the hotel. Steven watched English football and we all slept as soon as our heads hit the pillows. 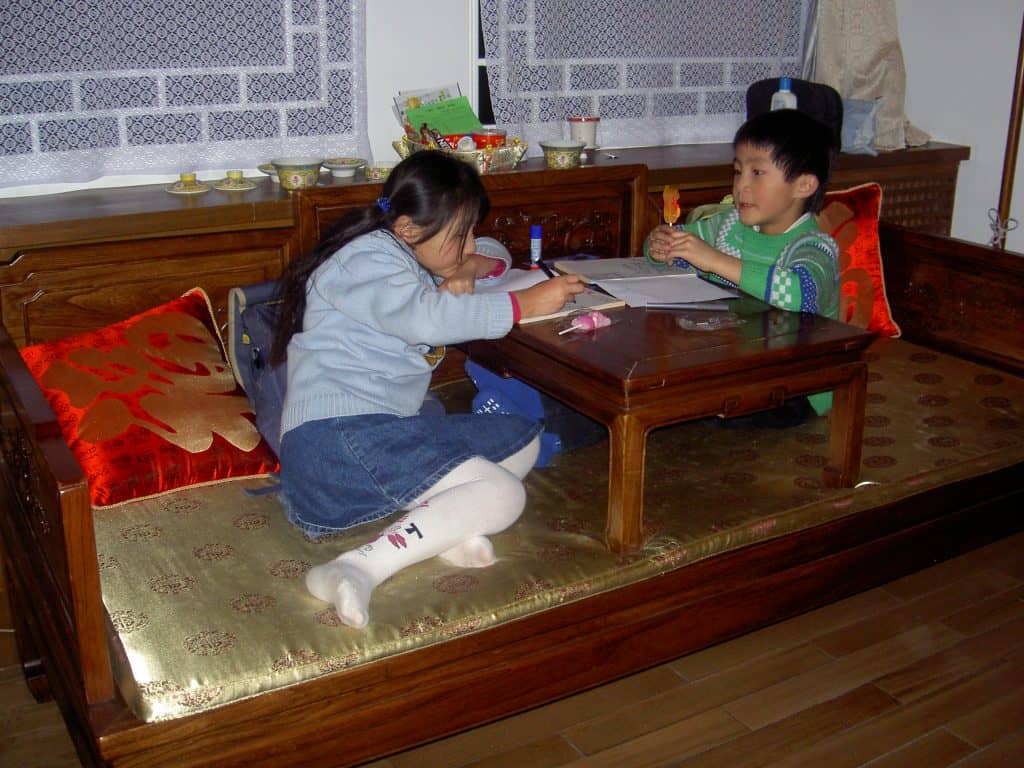