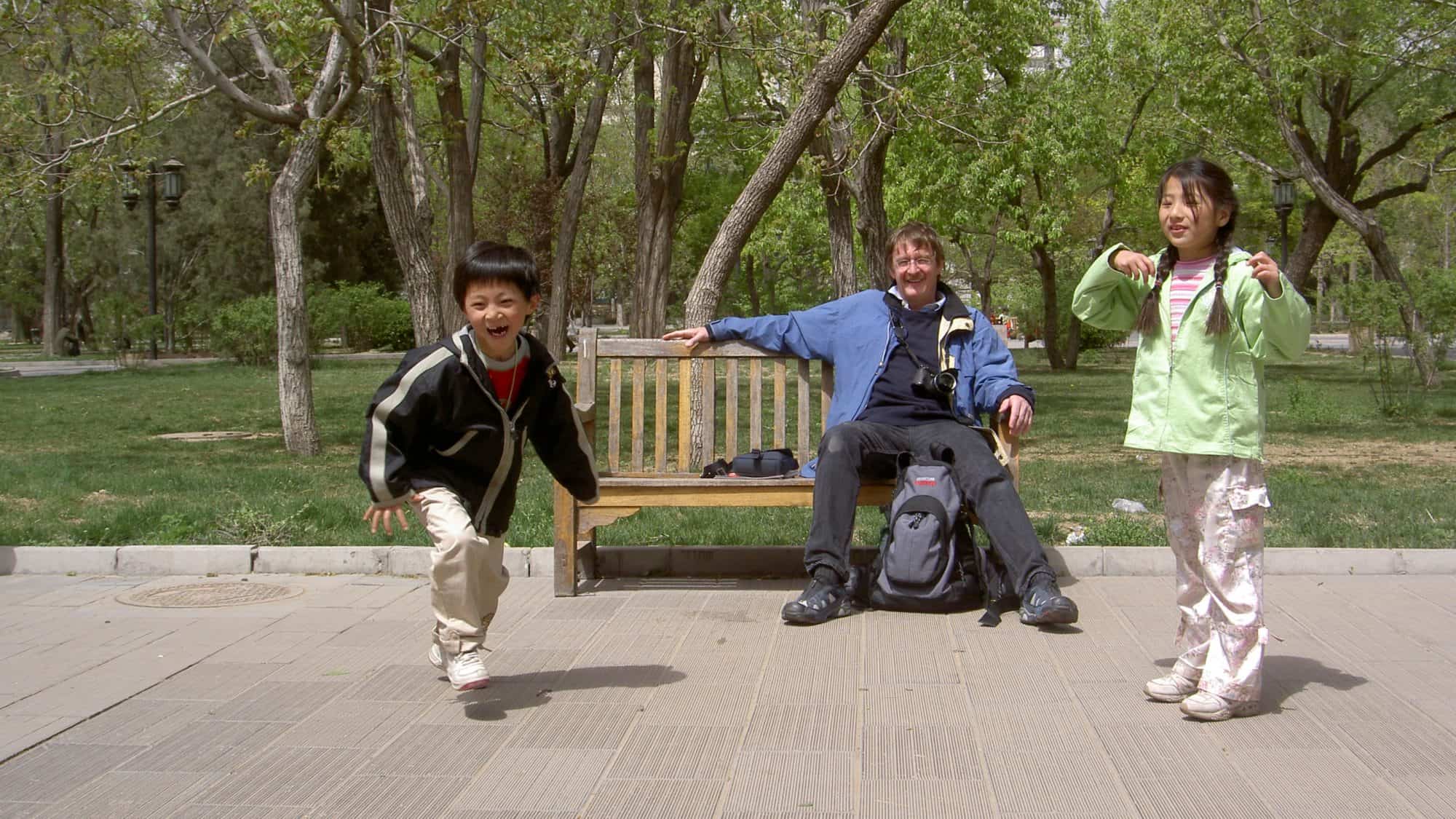 After one day shopping we were back in tourist mode. We only had two days left and being a Sunday we decided a temple would be appropriate. We took a taxi to the Lama Temple, evidently Beijing’s most colourful and lively temple. It was certainly busy, both with tourists, but also with many worshipers. 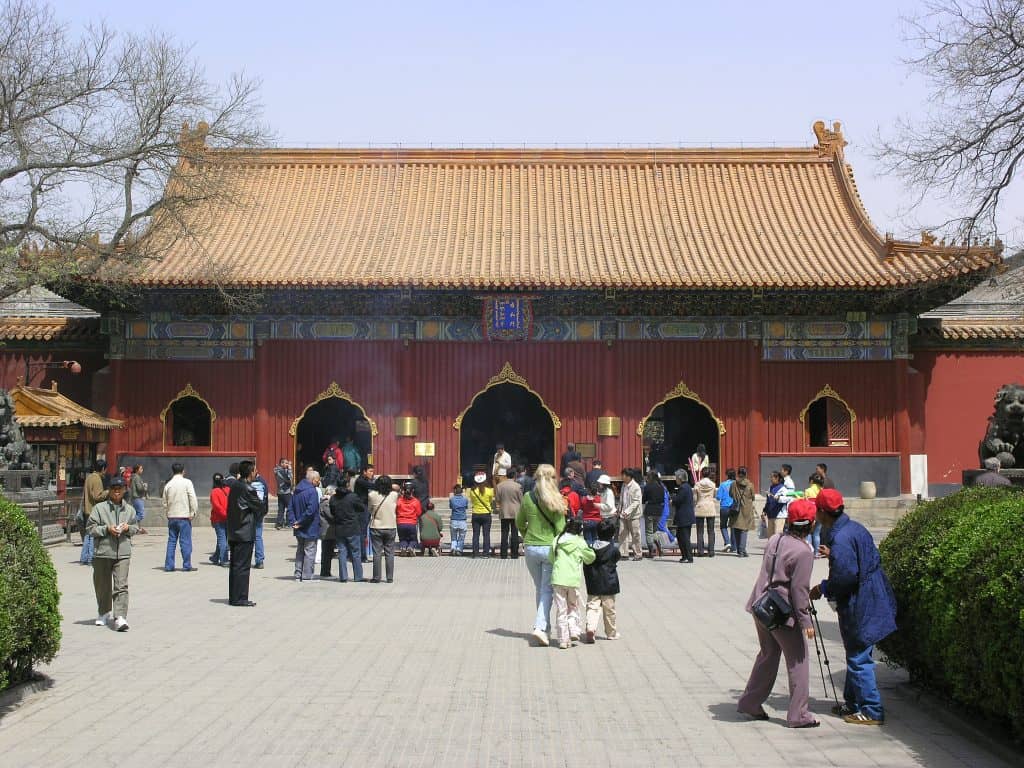 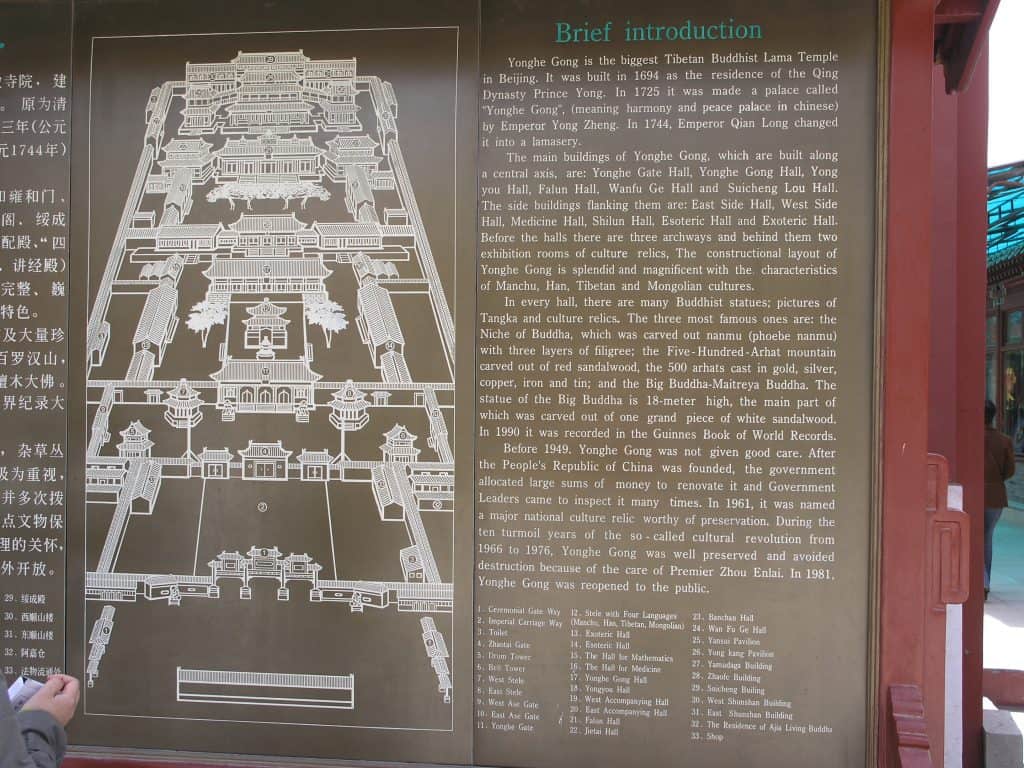 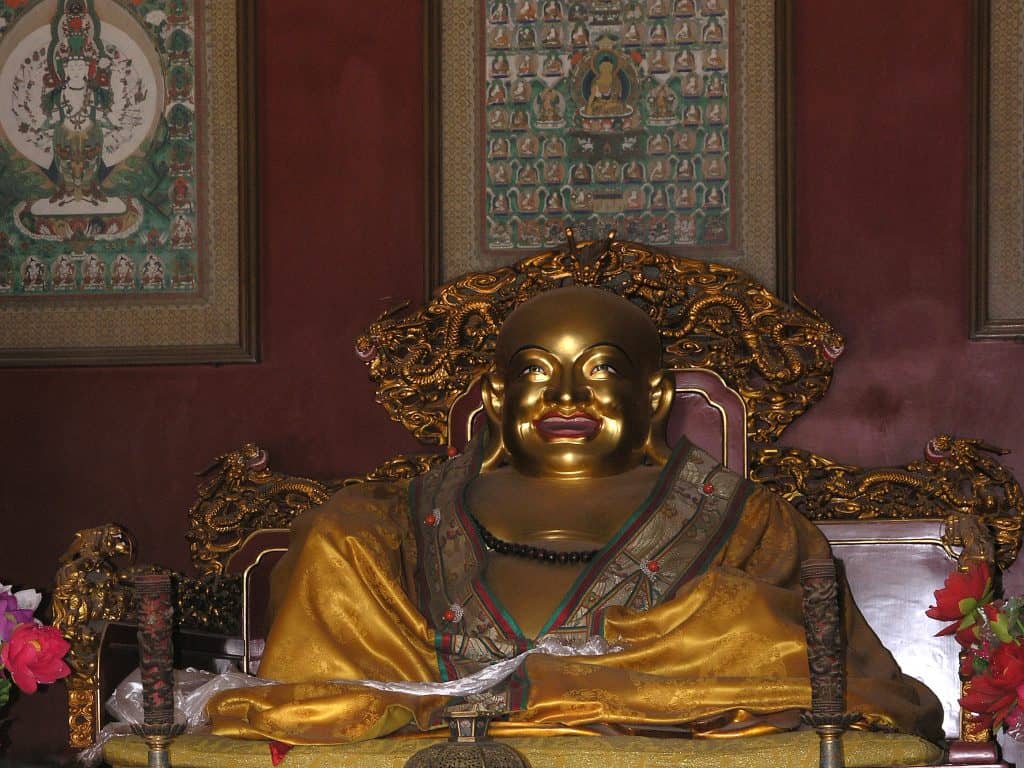 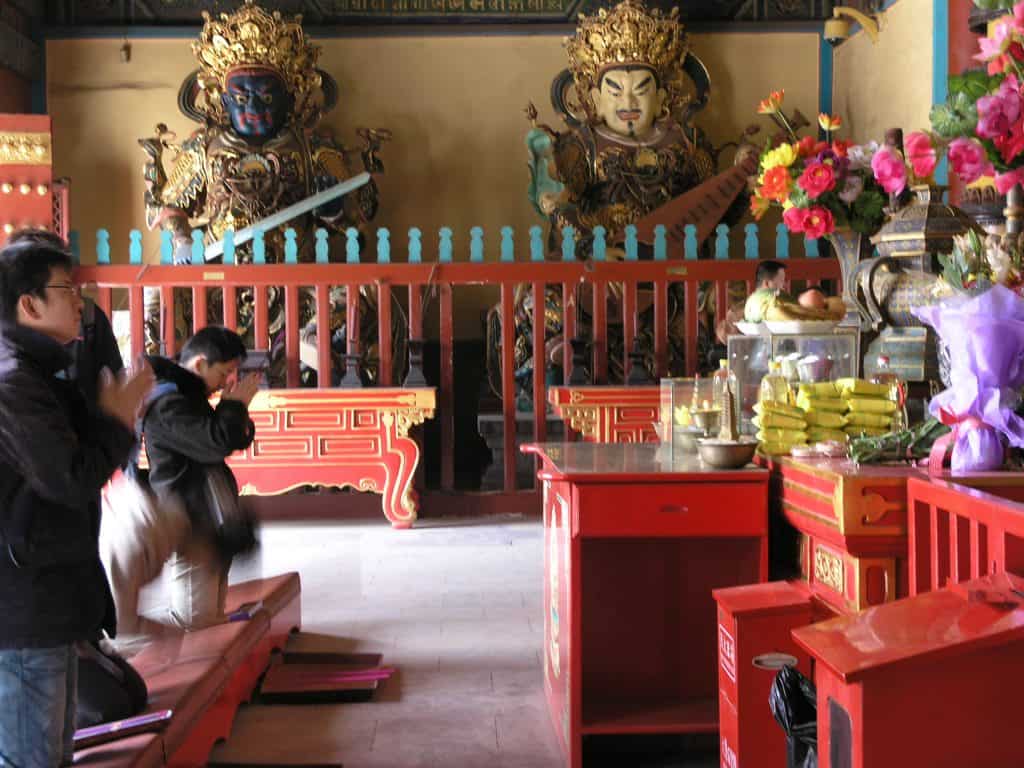 The top picture is The Hall of Celestial Kings. The two people to the right had just seen Lene, Yanmei and Daji walk by and swung around to stare after them!  The temple was built in 1694 and became a lamasery in 1744. It consists of five halls, each one taller and more elaborate than the previous. Each is surrounded by courtyards and galleries. Most impressive are the Buddha’s in the Hall of Celestial Kings, flanked by giant guardian’s and the Maitreya Buddha, 18m high band carved from a single block of sandalwood. 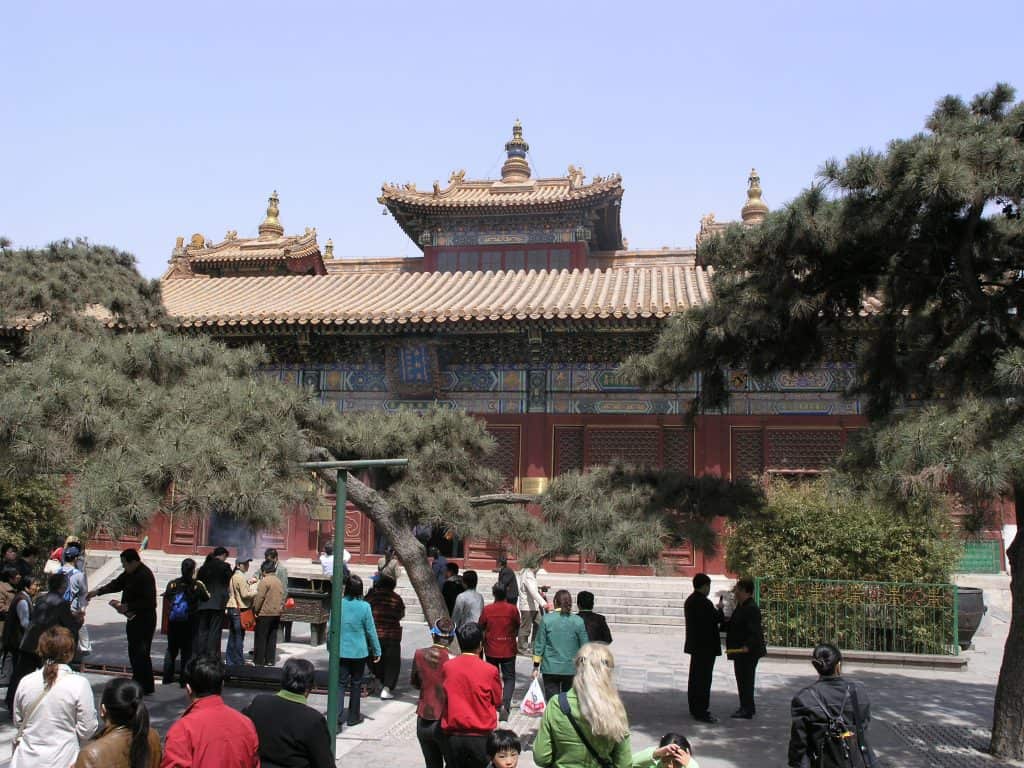 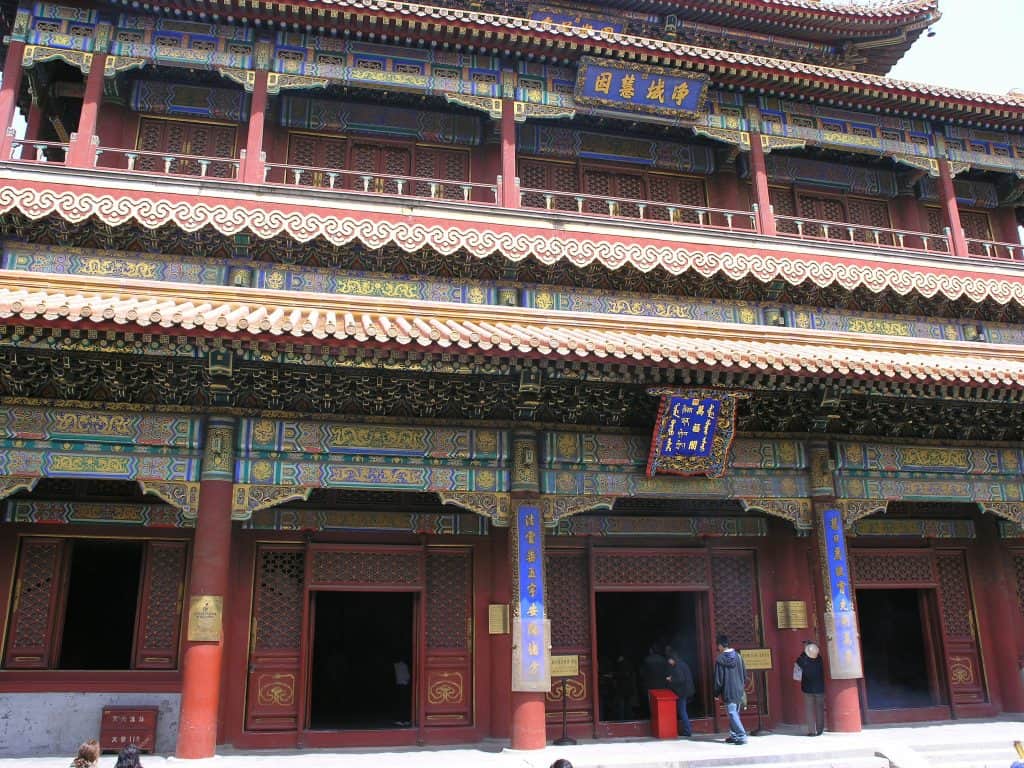 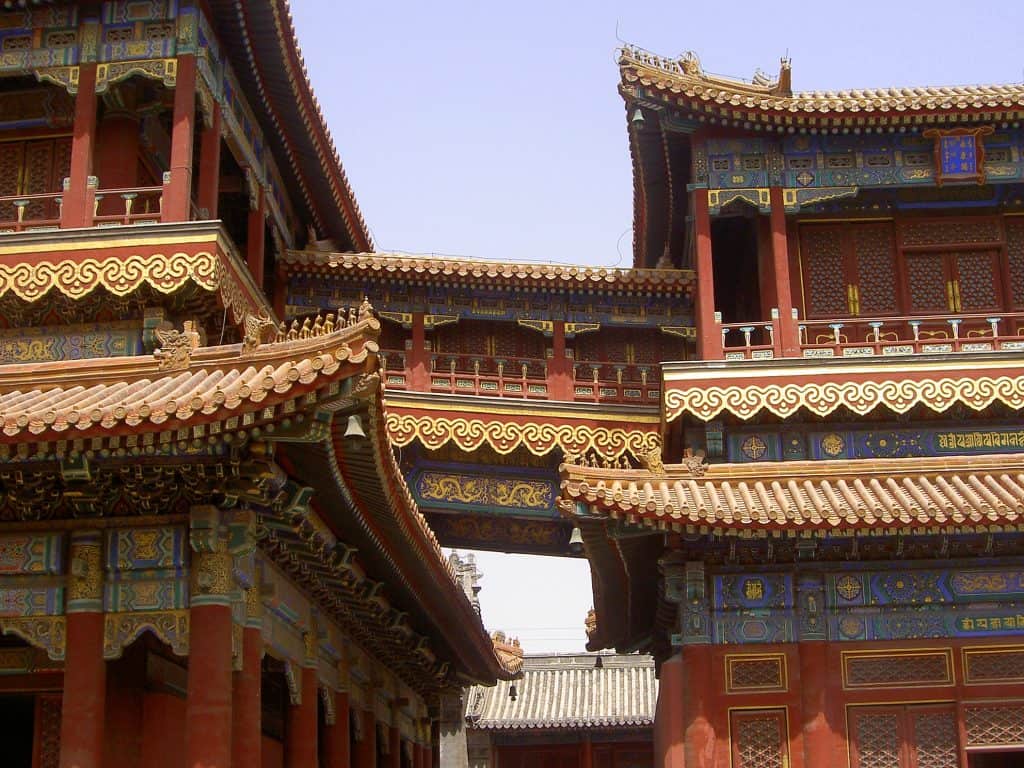 The temple was very lively with lots of people, the buildings were well kept and bulging with Buddha’s of all forms, tapestries and frescoes, for example depicting the life of Tsong Khapa founder of the Yellow Hat Sect. The Lama Temple was closed down during the Cultural Revolution, but saved from destruction by deputy prime minister Zhou Enlai, and re-opened again 1980 as a functioning monastery with monks from Mongolia. 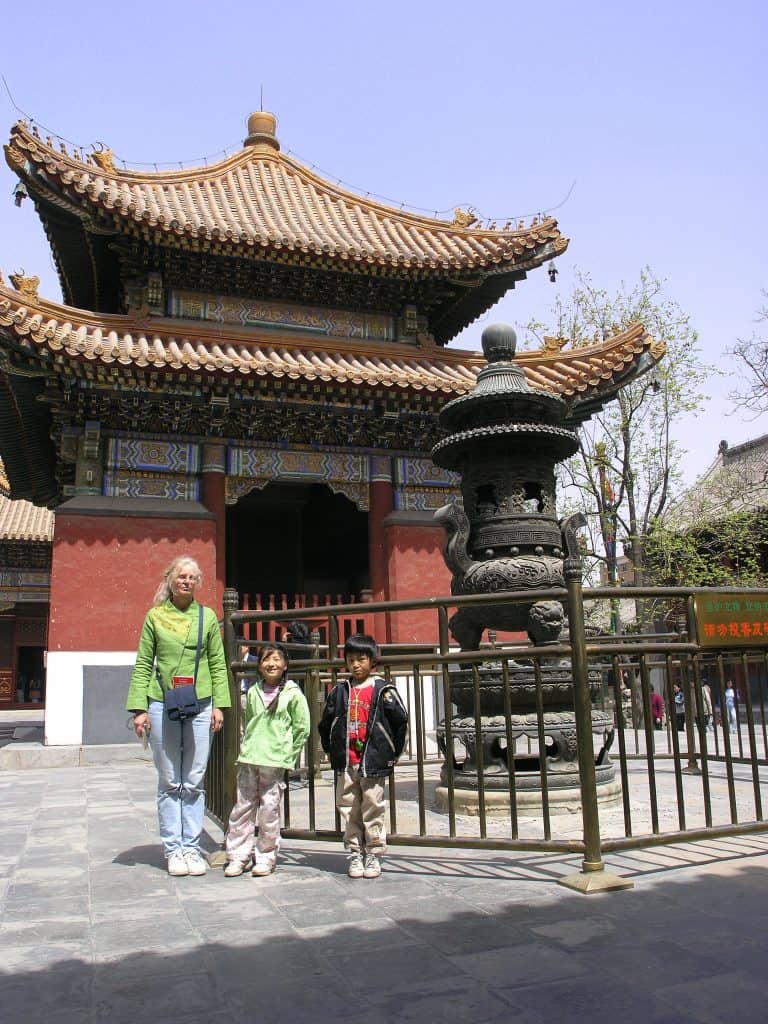 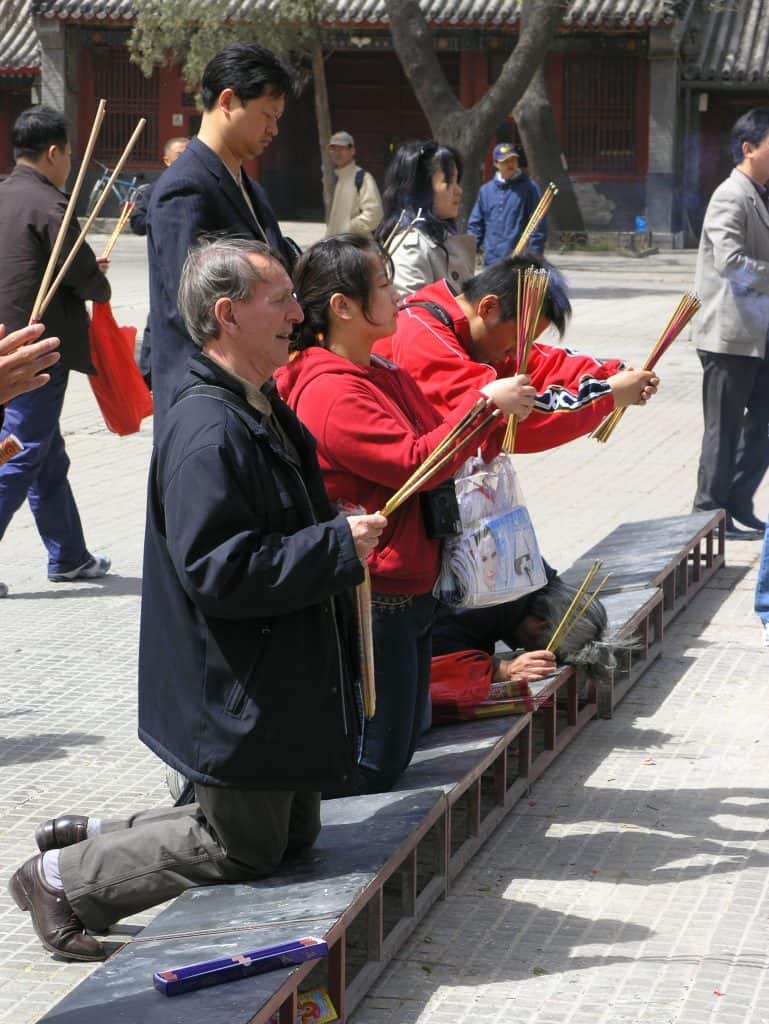 It was nice to see all things within the halls and all the people worshipping and the plumes of smoke. But, best of all was just watching the many Chinese visitors wandering from hall to hall, paying homage, walking through the gardens and in general, just relaxing in the beautiful spring weather. 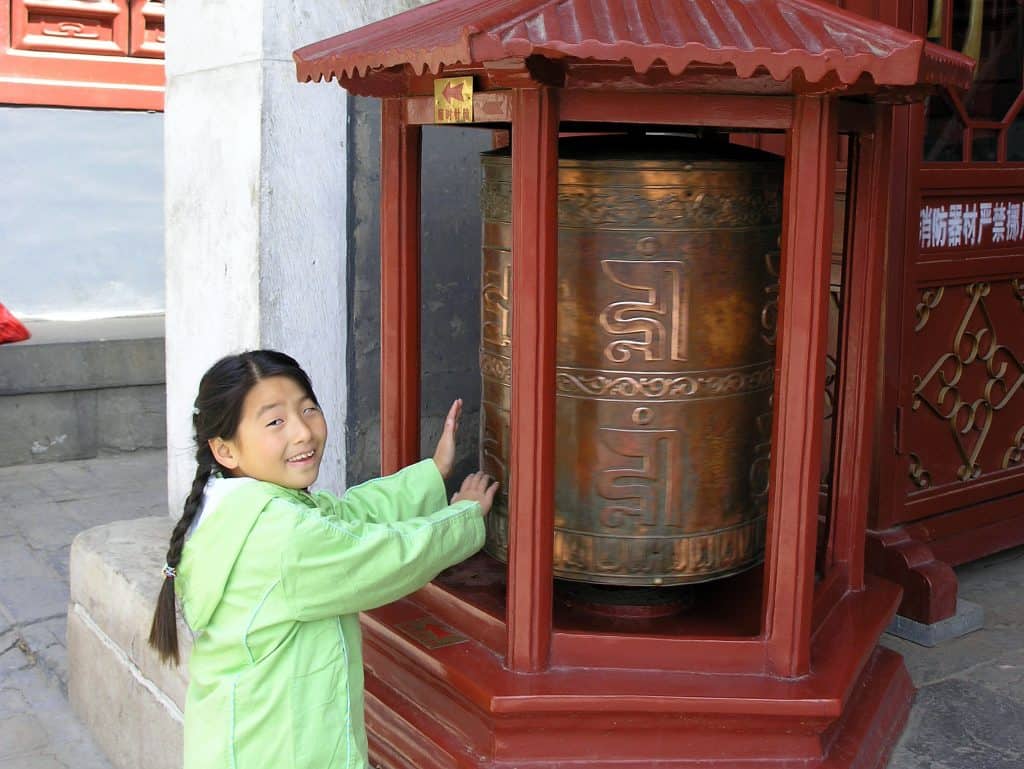 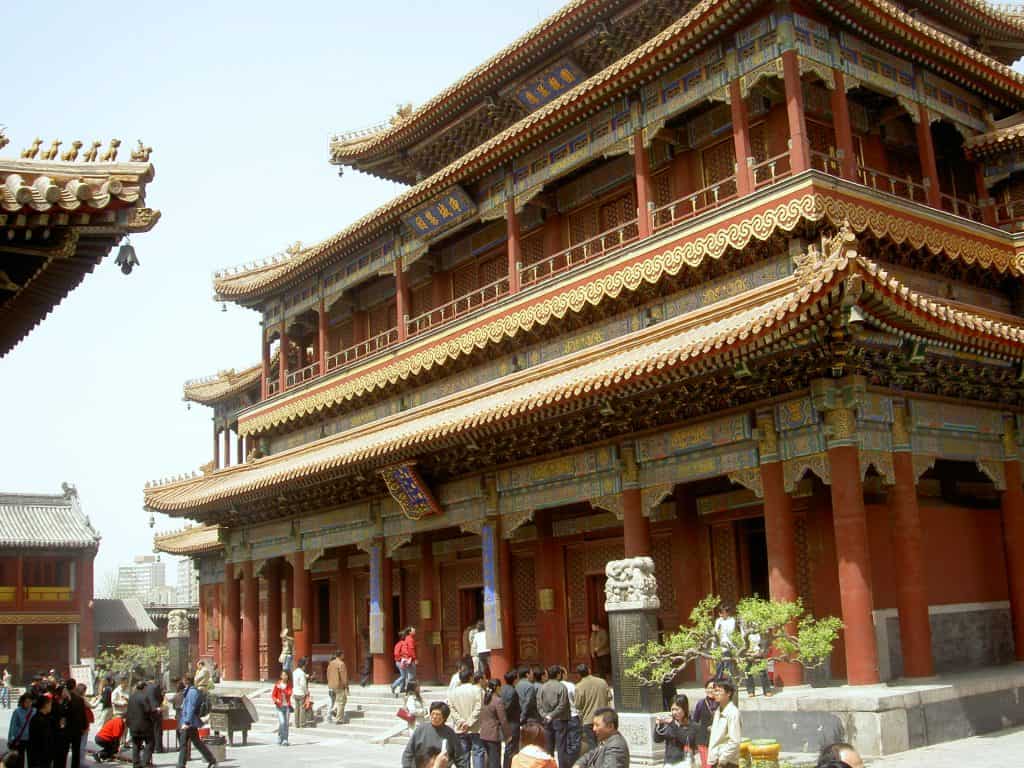 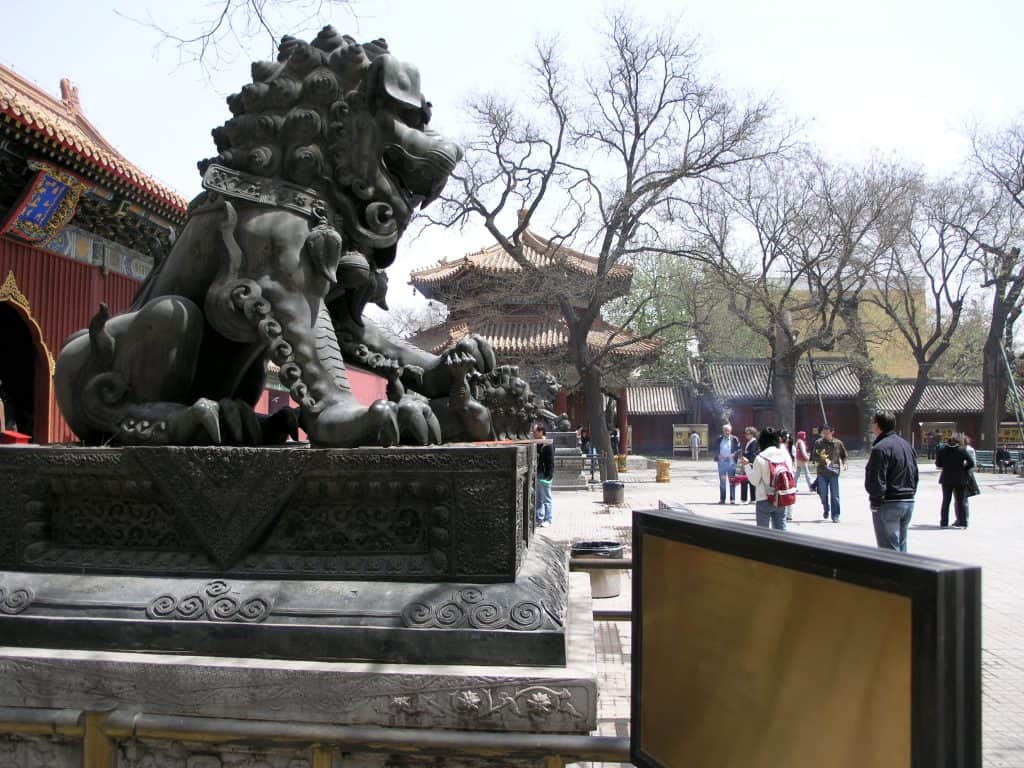 We left the temple and walked north, across the ring road and on to Ditan Park or The Temple of Earth – the site of imperial sacrifices to the Earth God. The park forms a north south axis with the Temple of Heaven we had visited earlier during our stay in Beijing. However there was no chance to see the square alter as the whole park was being used as a Book Fare and was packed with students and others – it was impressive to see the number of booths and the number of people. We found a quiet spot and sat and relaxed, enjoying the sun and practicing our skills (or lack of!) with a feather ball we’d seen many Chinese using at the Temple of Heaven. We left the park at the west entrance – clearly going against the stream as many more arrived at the book fare. 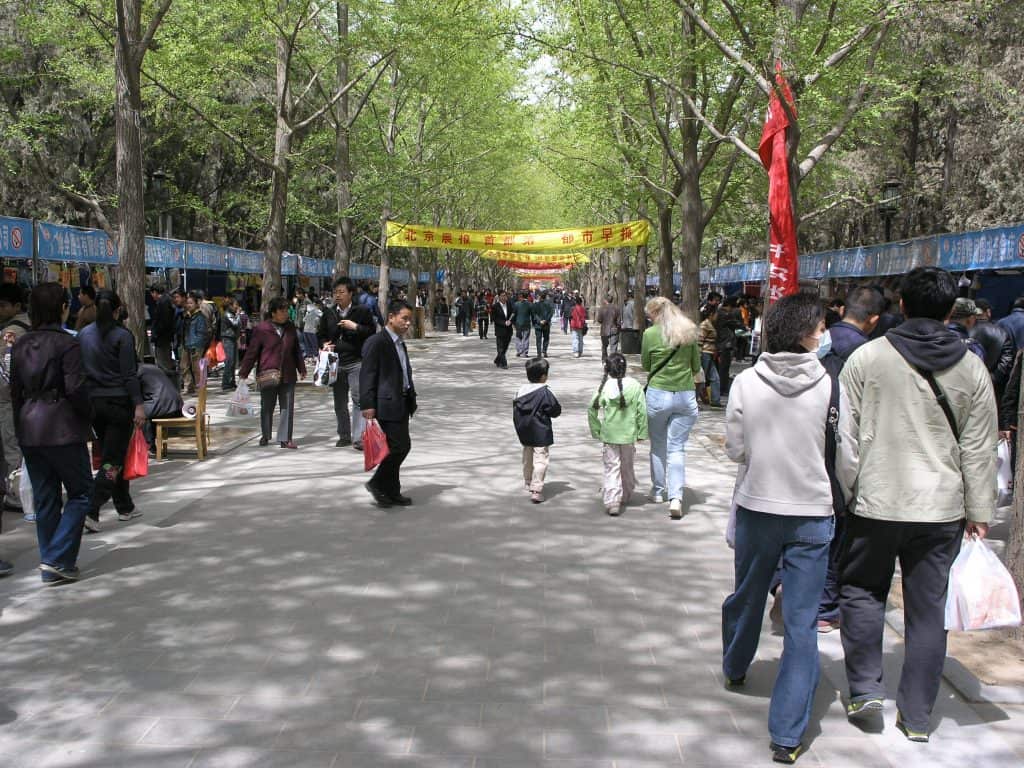 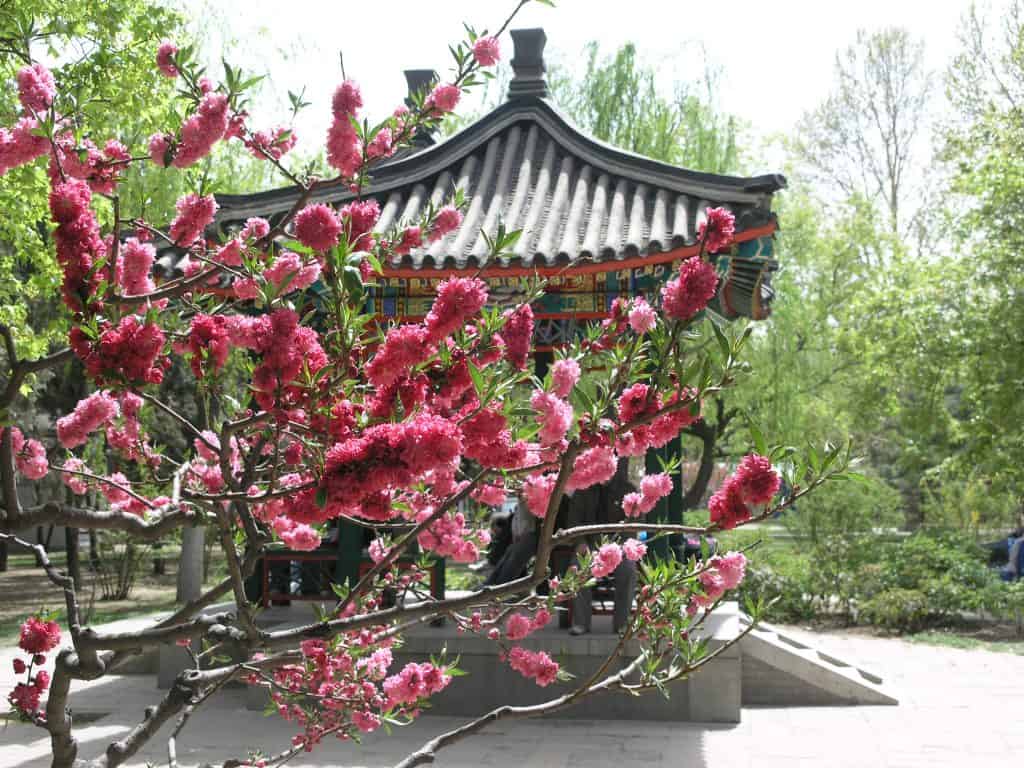 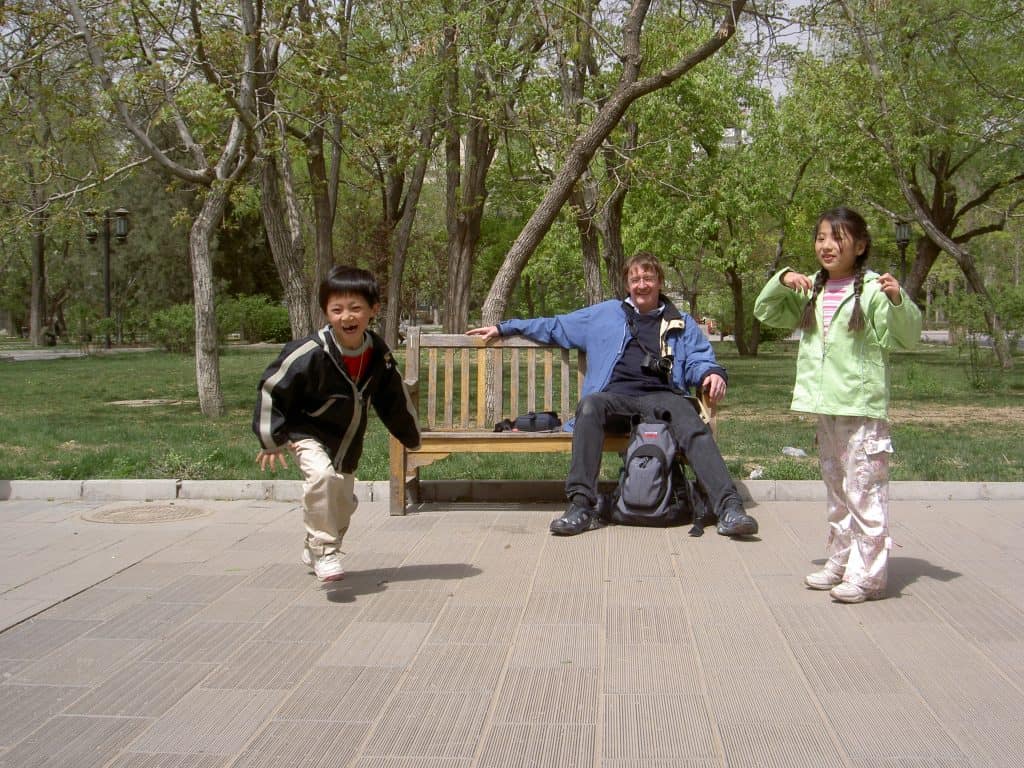 We started to walk back towards the hotel. Many people were on the streets. At the first intersection we found an exercise playground and Yanmei and Daji darted off to do their daily exercises – as if all the walking they were doing wasn’t enough exercise. 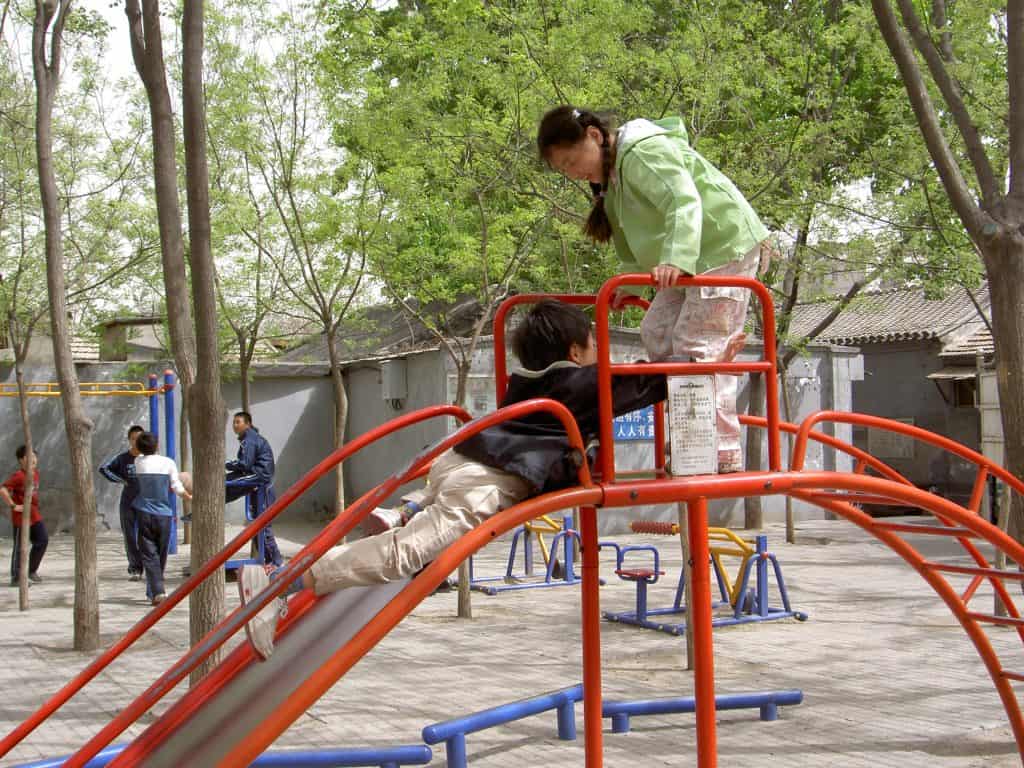 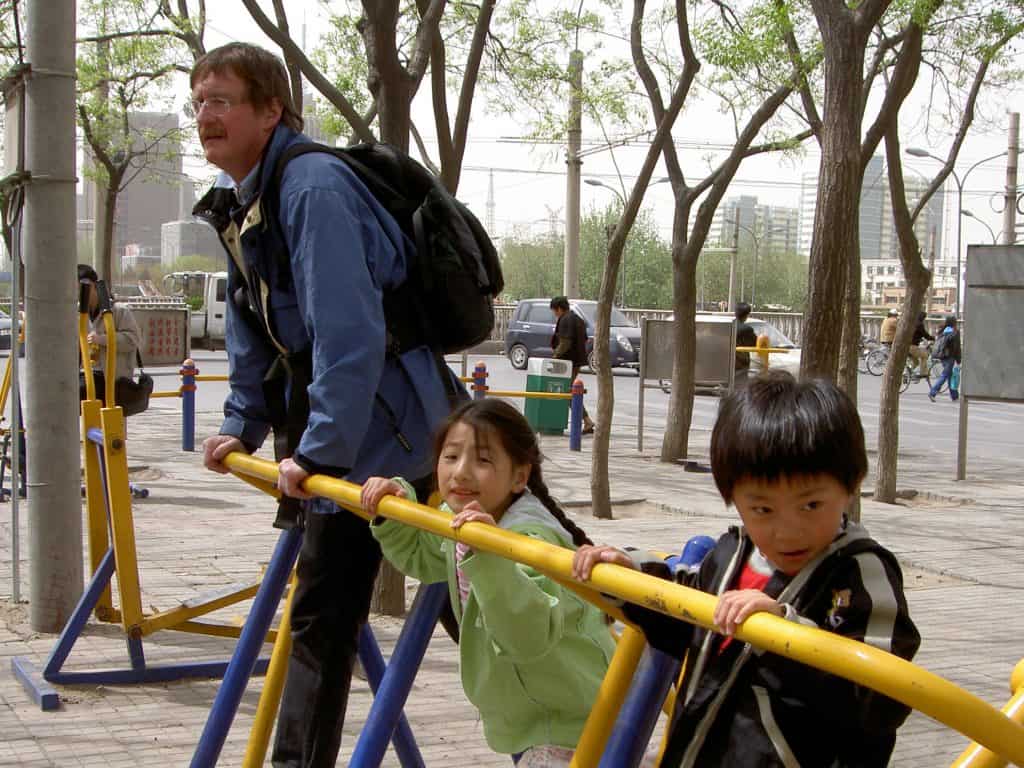 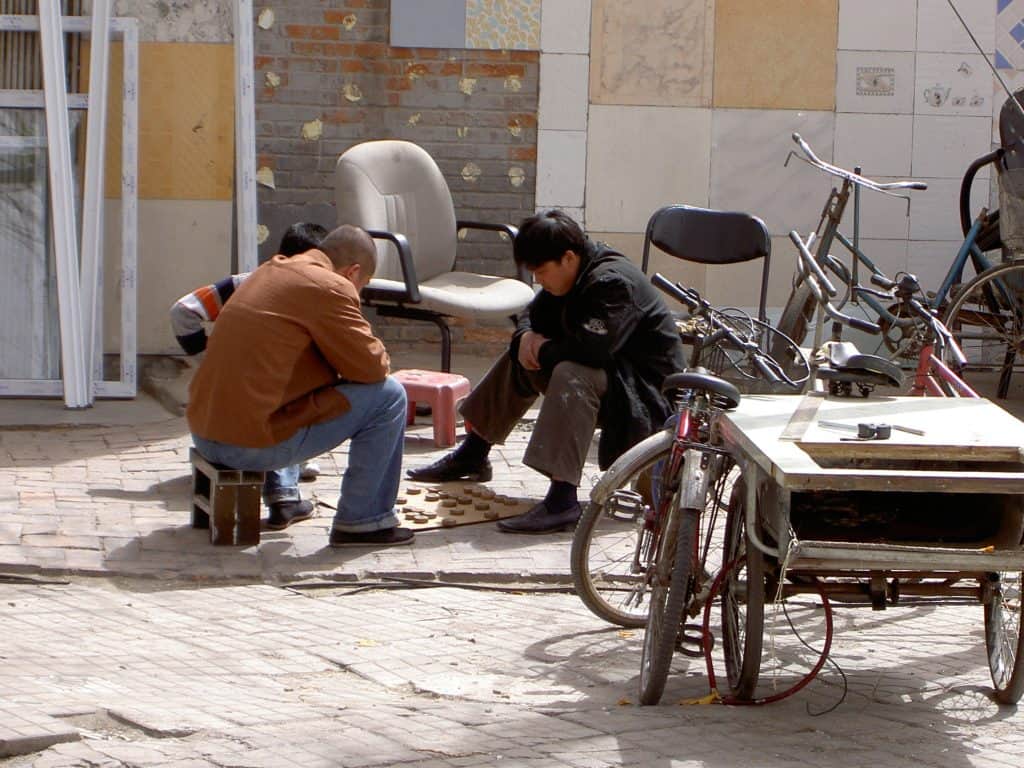 After some time we continued in the direction of the hotel, buying a stand-up lunch on the way. We walked along Longfu Si Jie – in the early 1990’s Beijing’s finest pedestrian shopping street, that has since slipped down market but is quietly gaining some of its former prestige. Steven bought CD’s and DVD’s, whilst Lene bought a pair of shoes she’d been looking at in different shops throughout our trip to Beijing – now with a 40% reduction, she couldn’t resist the temptation. 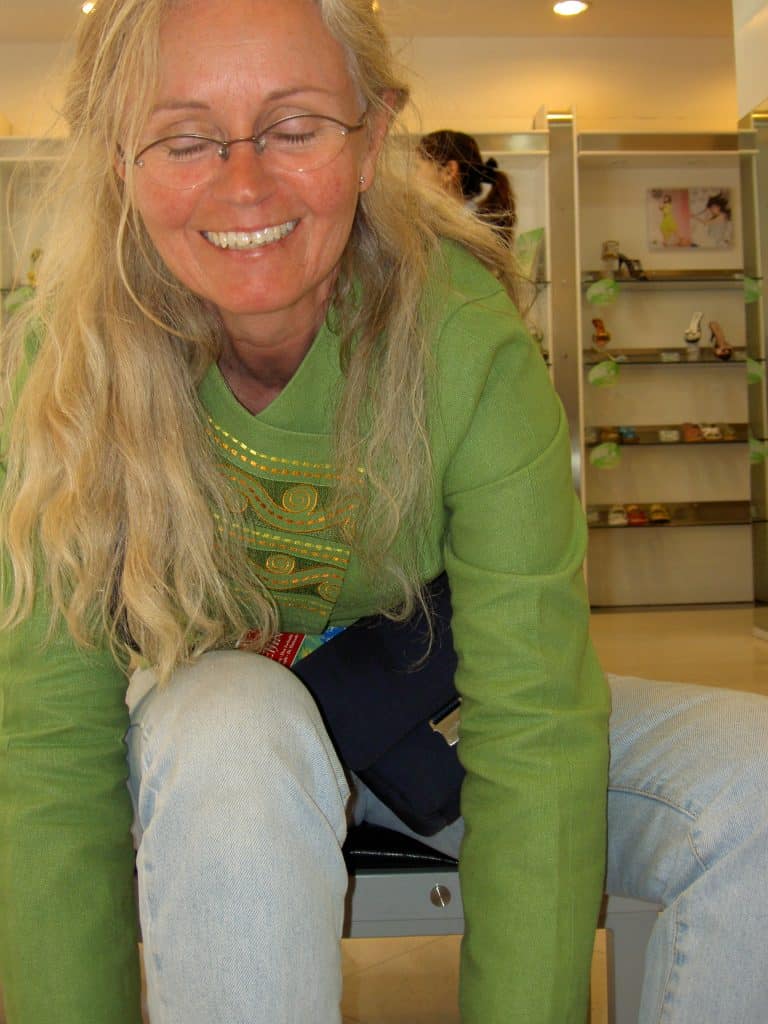 In the evening we eat at the Donghuamen Night Market – the nightly food market where it is possible to buy all kinds of local specialities, including fried grasshoppers, scorpions, kidneys, heats, tofu, mystery meat on kebabs and much, much more both exotic and more normal. The best of which is undoubtedly the caramel coated fruits – strawberry, pineapple, peach, kiwi and small sweet apples – all heavenly. We were not very adventurous eating pancakes with vegetables and buns as well as the caramel coated fruits (which cost 5 RMB – don’t stop at the first stall, they charge foreigners 10 RMB).

The Night Market is truly packed, many tourists, but also many Chinese, there is barely room to stand and eat what you’ve purchased – and remember to take something to wipe your fingers with. Whilst standing eating we saw another western couple with two Chinese children. We spoke and asked where the children came from – the boy was from Jinchang and had been collected the previous week. Imagine our surprise, when we told them that Yanmei was from Jinchang and we came from DK, the mother suddenly, but it’s you that have the web-site. It was surreal – what are the chances of meeting total strangers in Beijing (13m inhabitants) with adopted children from the same SWI as Yanmei, and who had read our web-site (the family were from Spain – if you ever read this, please send us a mail!). 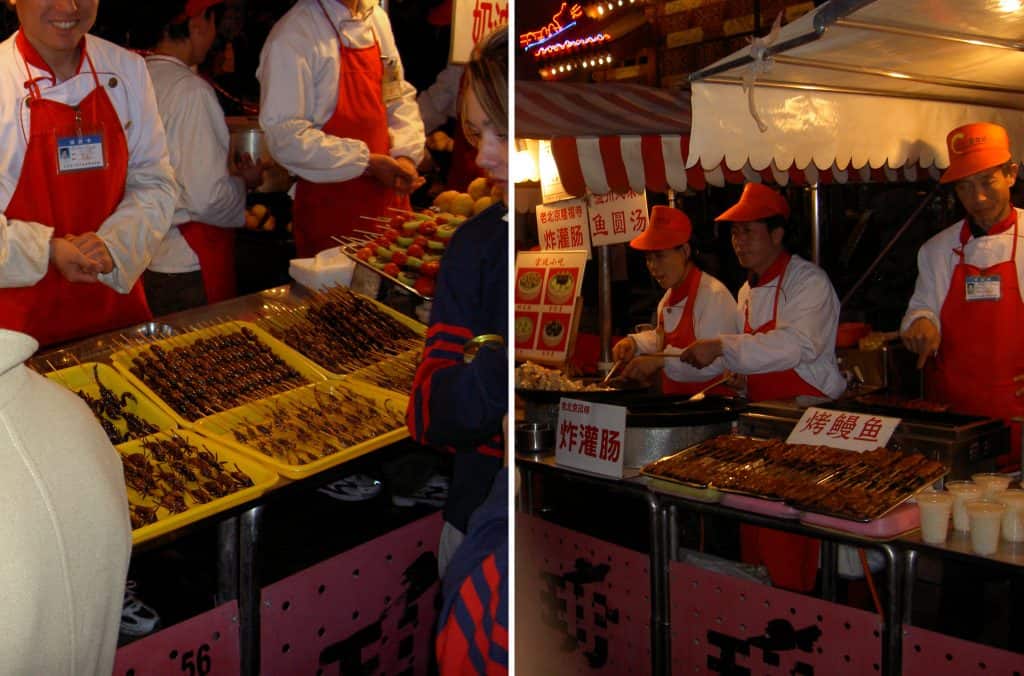 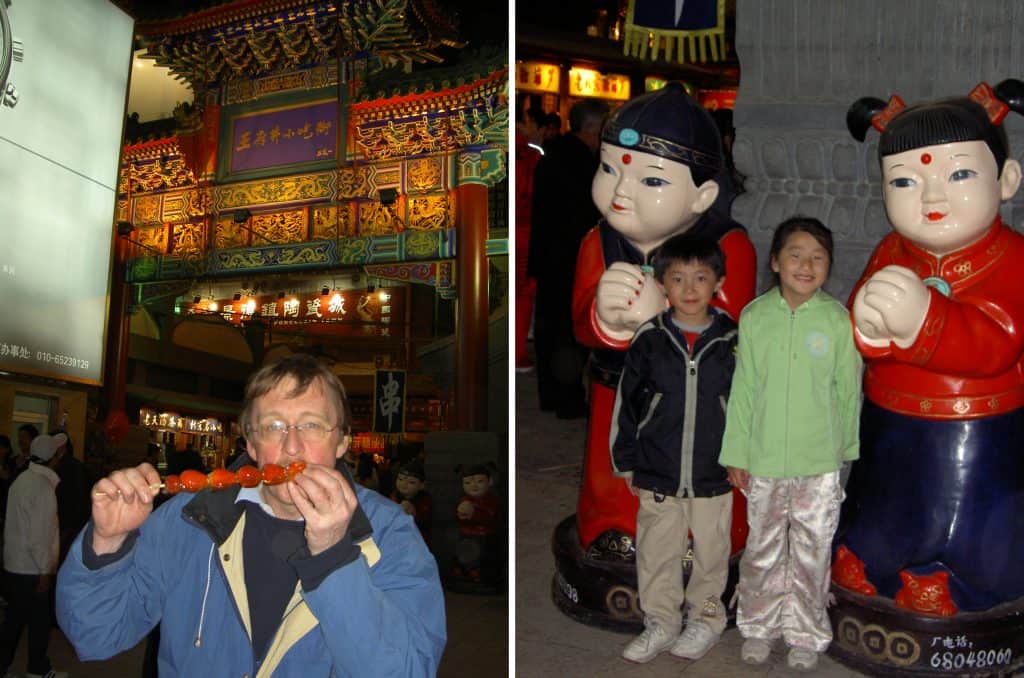 The only thing I wanted to bring back from China was a wind jacket for spring and autumn. Of course we didn’t find one for me, but Lene found one for herself (again, greatly reduced) from a sports shop, as we walked back towards the hotel.