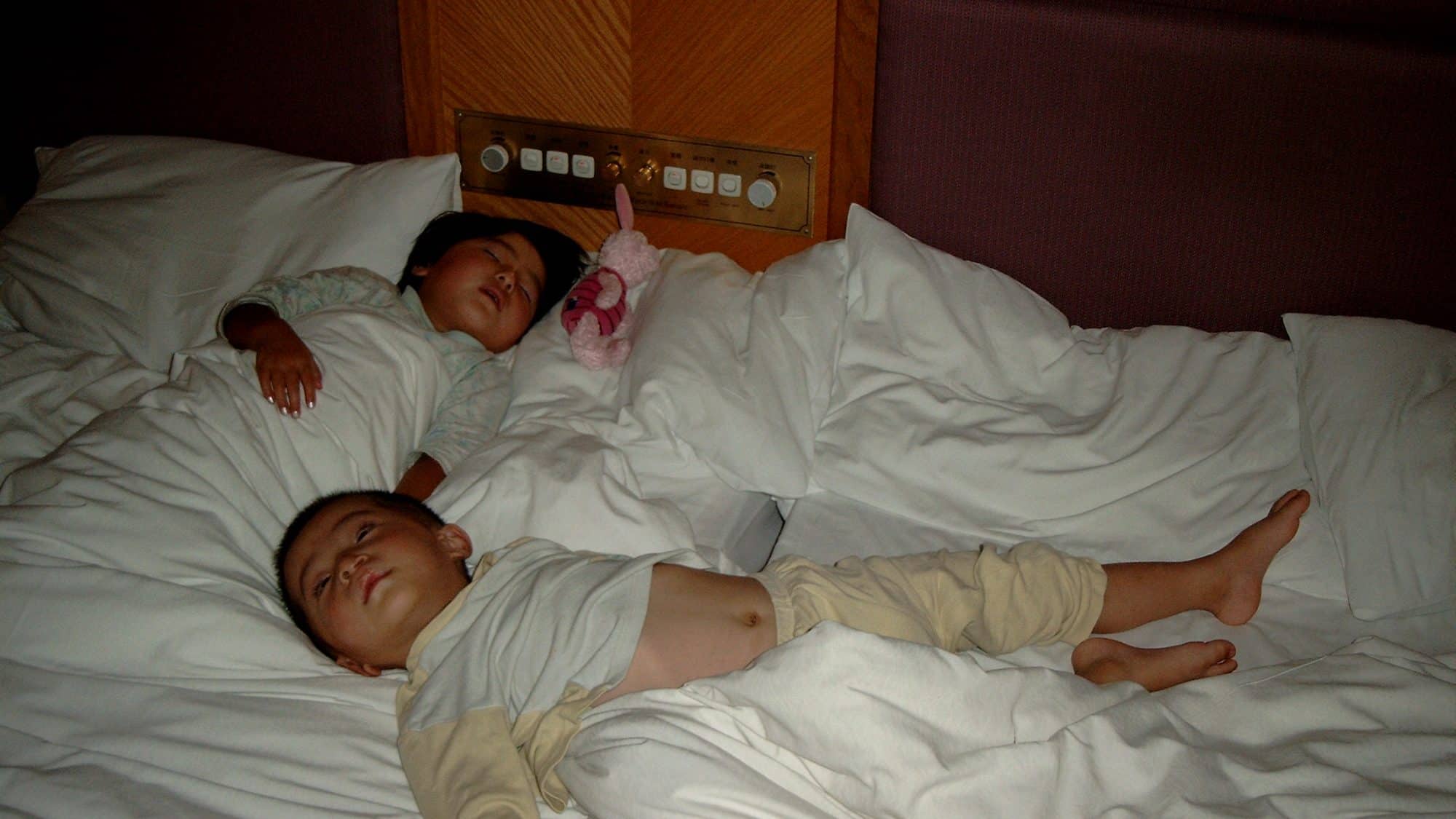 Daji slept through the night, he called out a couple of times, without waking, and moved around the bed – but all in all we got a peaceful nights sleep. The grey and wet weather started to set in – just now we didn’t feel that this was “heaven on earth” as per the Chinese saying.

After breakfast, where Daji ate well, we went to find some shoes for him. He only had the pair of canvas shoes that he wore when he came from Yiwu, and they were no match for the rain. The shoes we’d brought from Denmark were too small.

Our first stop was a newly opened department store for the super rich (it had opened the day before and was far from complete). We continued towards the supermarket we’d visited on Sunday, in stark contrast to the department store, we found an arcade with about 100 small shoe vendors – nothing but shoes, shoes and shoes. We found a pair of boots for him – helped by a crowd of people that gathered and asked questions as to why we had a Chinese son and daughter.

We went back to the supermarket we’d visited on Sunday, to pick up some food for lunch. We bought what we initially thought was a magnum bottle of Chinese “champagne” – it turned out to be cider – to celebrate Isabella’s birthday. Claus and Helle (Isabella’s parents) supplied a Chinese birthday cake – sponge covered with multi-coloured cream, and they’d even brought Danish flags. We even sang Danish birthday songs! 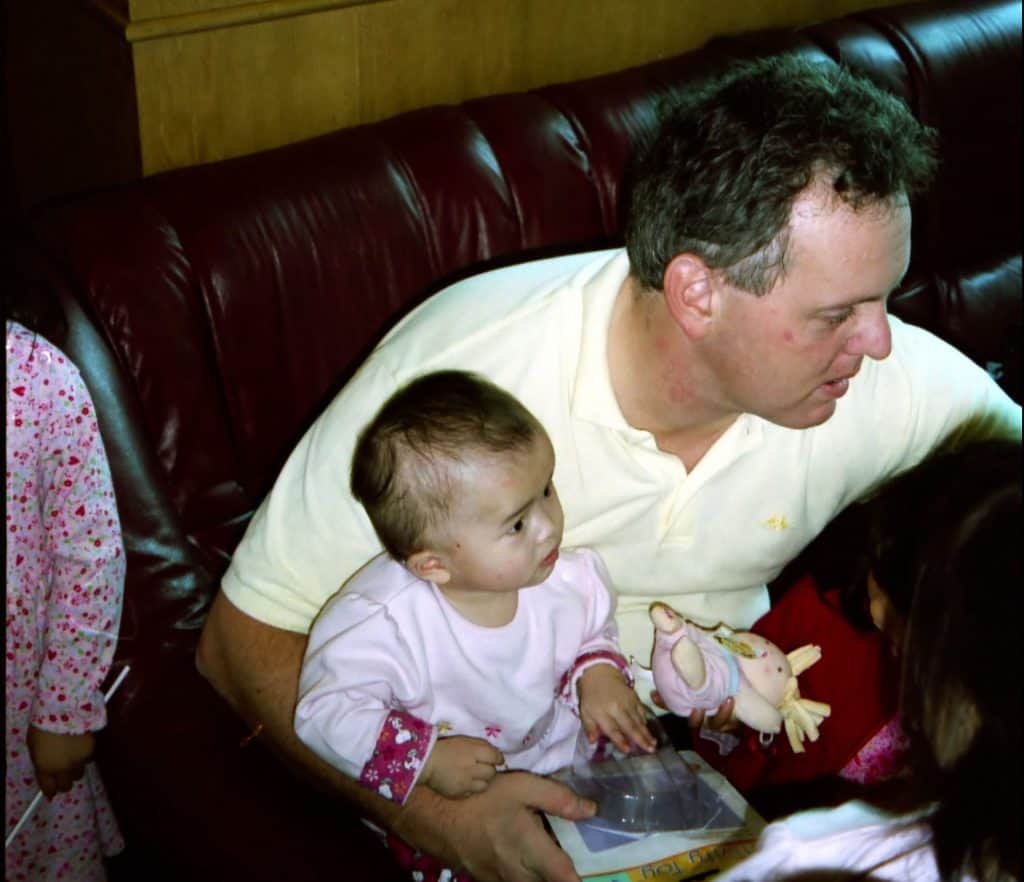 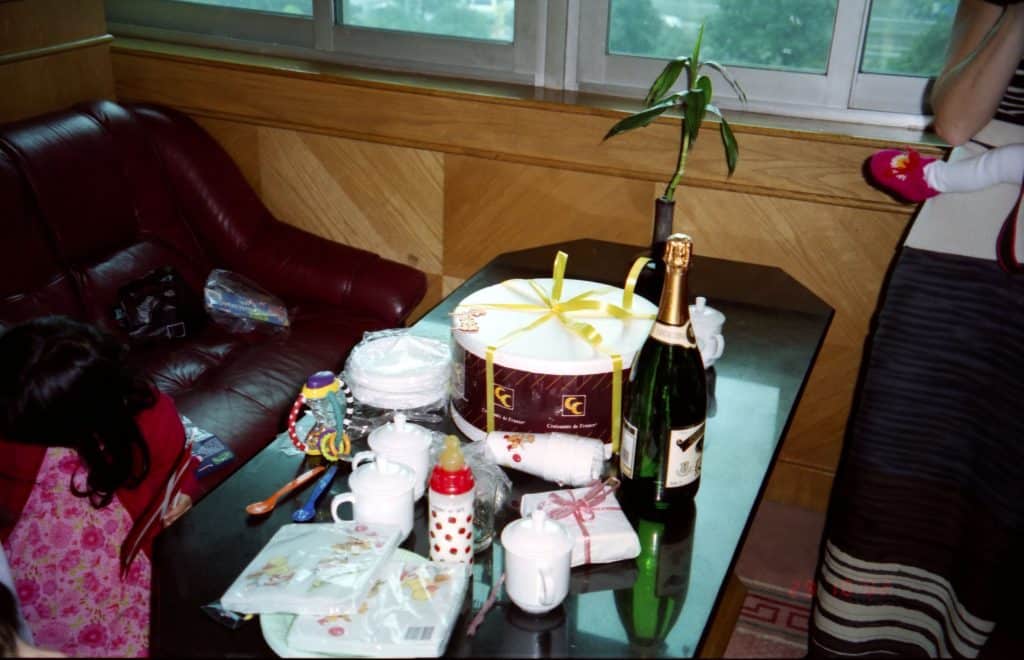 In the afternoon we were back at the Civil Affairs Office for the official presentation of the adoption documents, including a small gift for Daji (a panda), and to meet the Notary and fill in some more forms. 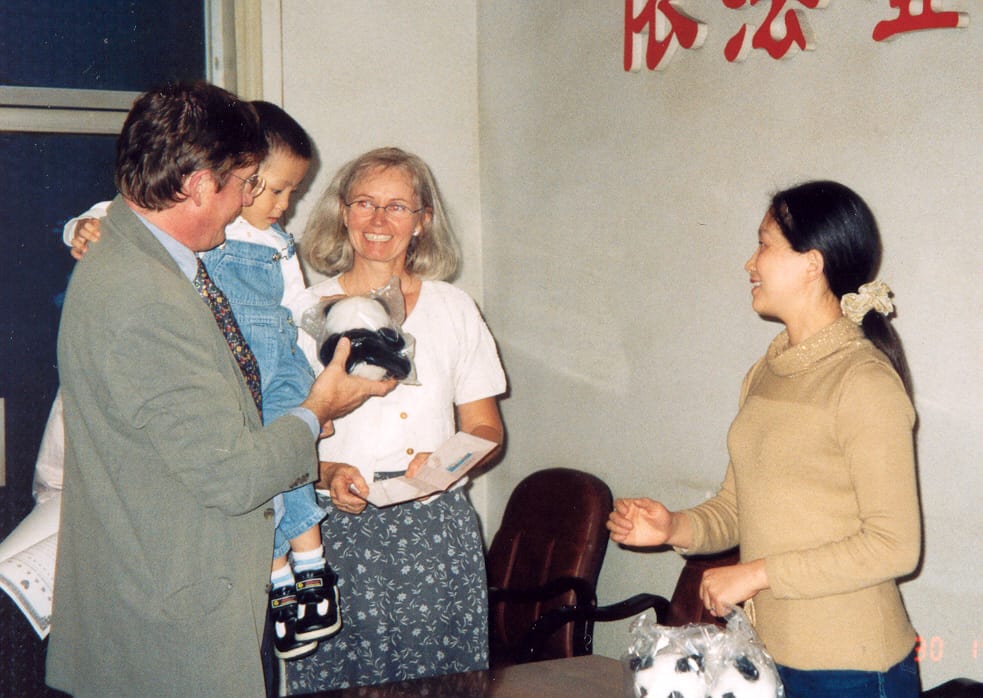 We drove across town to the passport office – it poured down! This was Daji’s first trip in the bus and he beamed all over his face – now that Daji had a seat on the bus, every time we went anywhere in the bus, it had to be same seat. He loved driving about. At the passport office we answered a couple of questions and were driven back to the hotel. 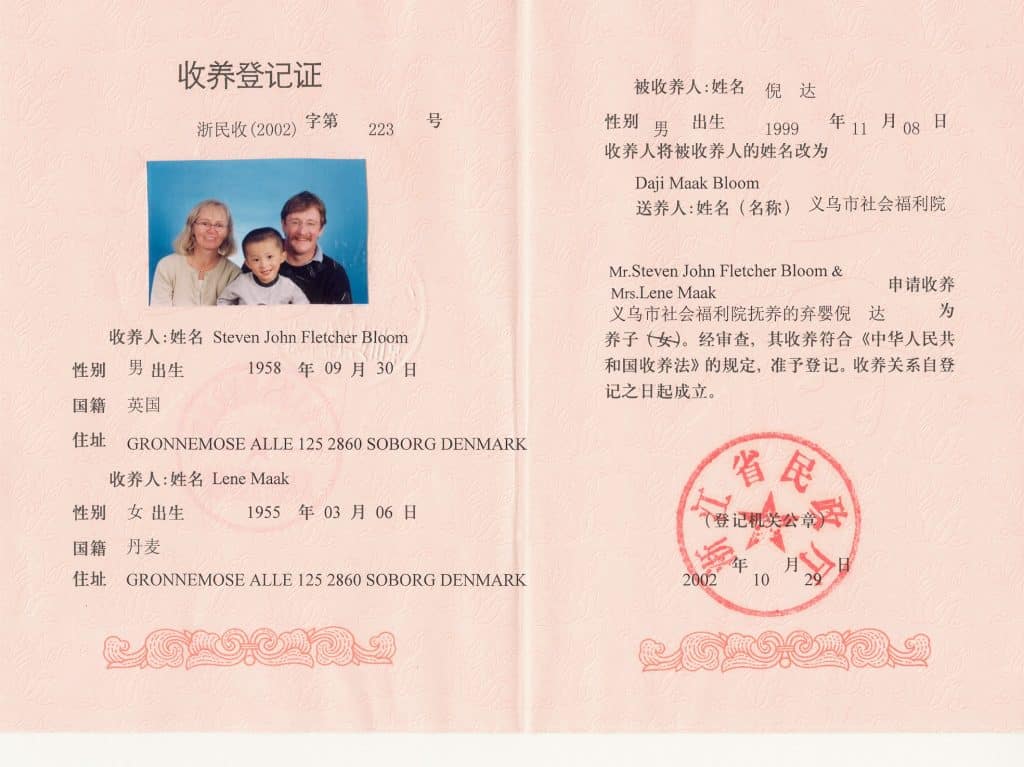 Daji’s passport photo, taken at the orphanage, had the wrong background colour (red), and therefore yet another visit to the photographer was necessary. This time Daji was on better behaviour – but he certainly didn’t look happy – as you can see. 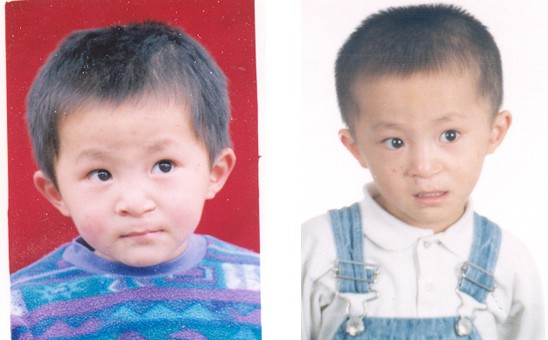 We relaxed the rest of the afternoon – Daji continuing with the uncontrollable laughter and occasional outbursts of temper. Daji and Yanmei took a bath together and had great fun. This was the first time that Daji made contact with Yanmei. We ate at the buffet and the children ran around in the lobby afterwards – Daji following after. Steven managed to brush Daji’s teeth for the first time – under protest. 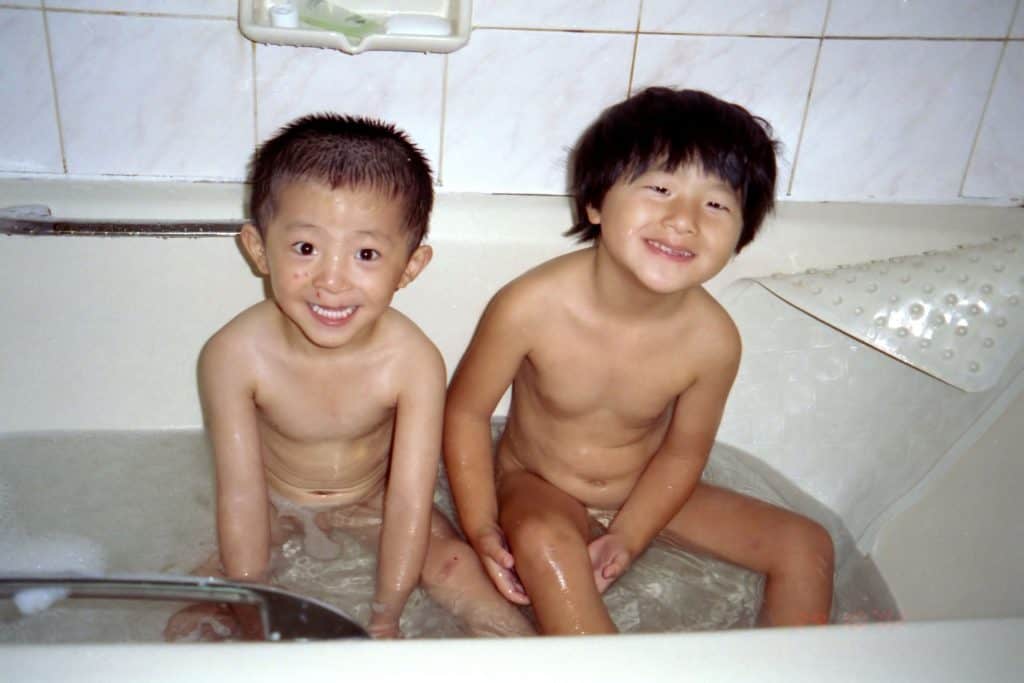 Daji still followed Steven everywhere, but fell asleep watching TV at about 21:00. We spoke by phone to Christina (DanAdopt’s representative in China) during the evening. Daji had been marginally better during the day, and whilst we certainly still felt that it was his defense mechanism that was kicking in, we were still concerned. At times Daji was close to tears, e.g. when he hurt himself (and he was very clumsy!) or when he didn’t get his own way; but the tears never came as he continued to laugh loudly. Often he’d suddenly stop laughing and stare into the distance for 10-20 seconds – it was as though he was on another planet – then he’d laugh, smile and carry on whatever he was doing as though nothing had happened. 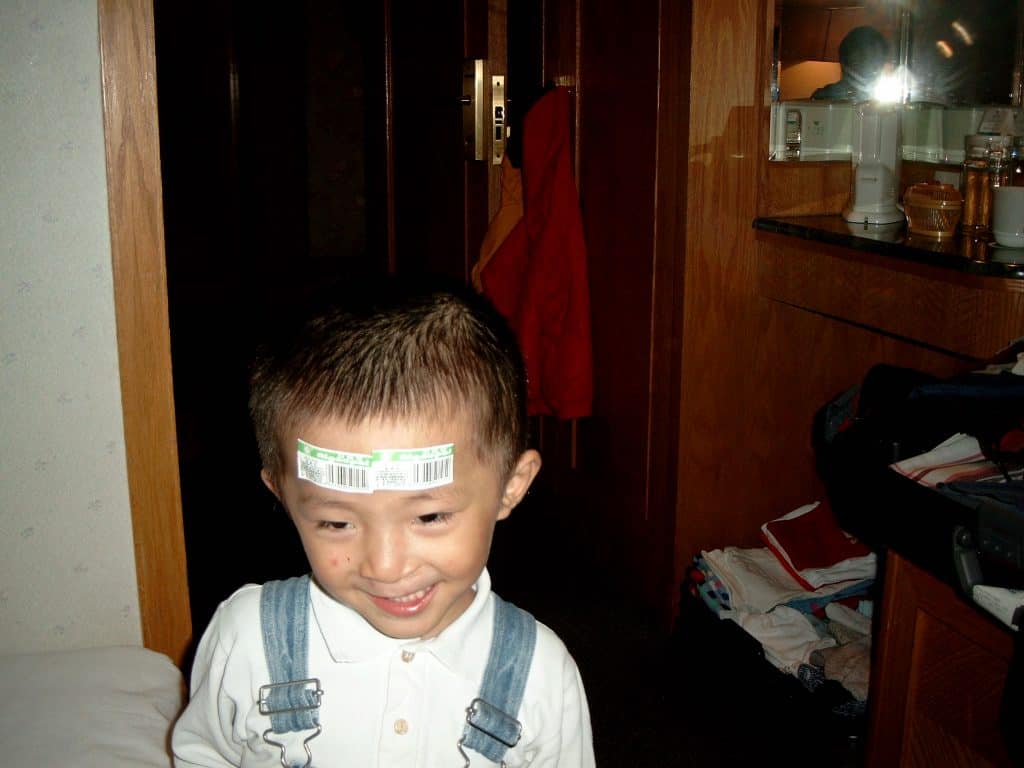 Despite the concerns, we slept well – we were exhausted, both physically and emotionally.