We woke fairly early – before the alarm clock rang. We had to be at the Civil Affairs Office by 9:00, so at 8:30, four sets of expectant, well-dressed parents and 4 soon to be big sisters, met in the lobby for a group photo.

The Civil Affairs office is across the road from the hotel, so we navigated the congested road and made our way to the 3rd floor conference room. 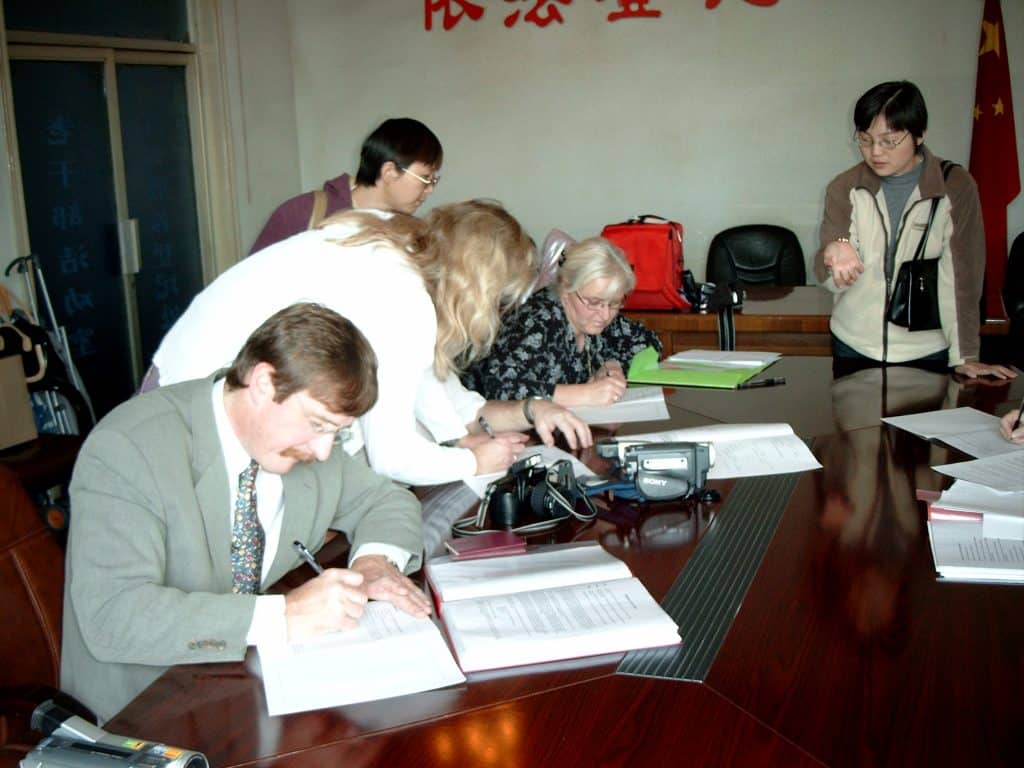 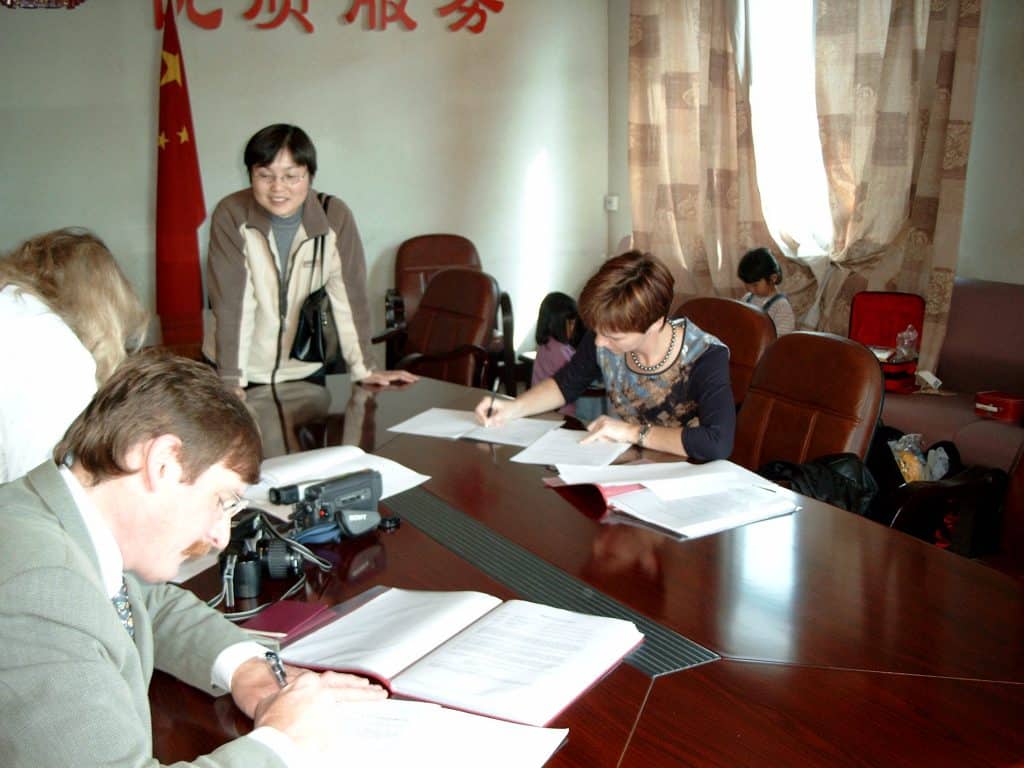 We started to fill out the forms with one eye on the door. We waited expectantly. The four sisters played with each other and made drawings, waiting for their smaller brother and sisters to arrive. 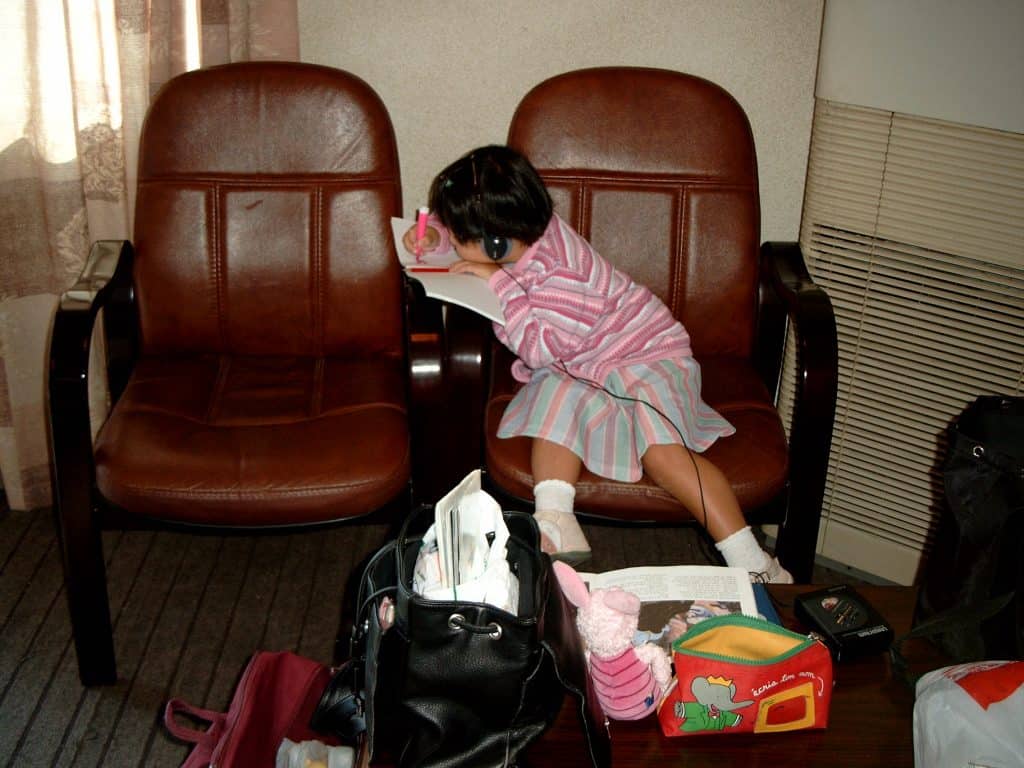 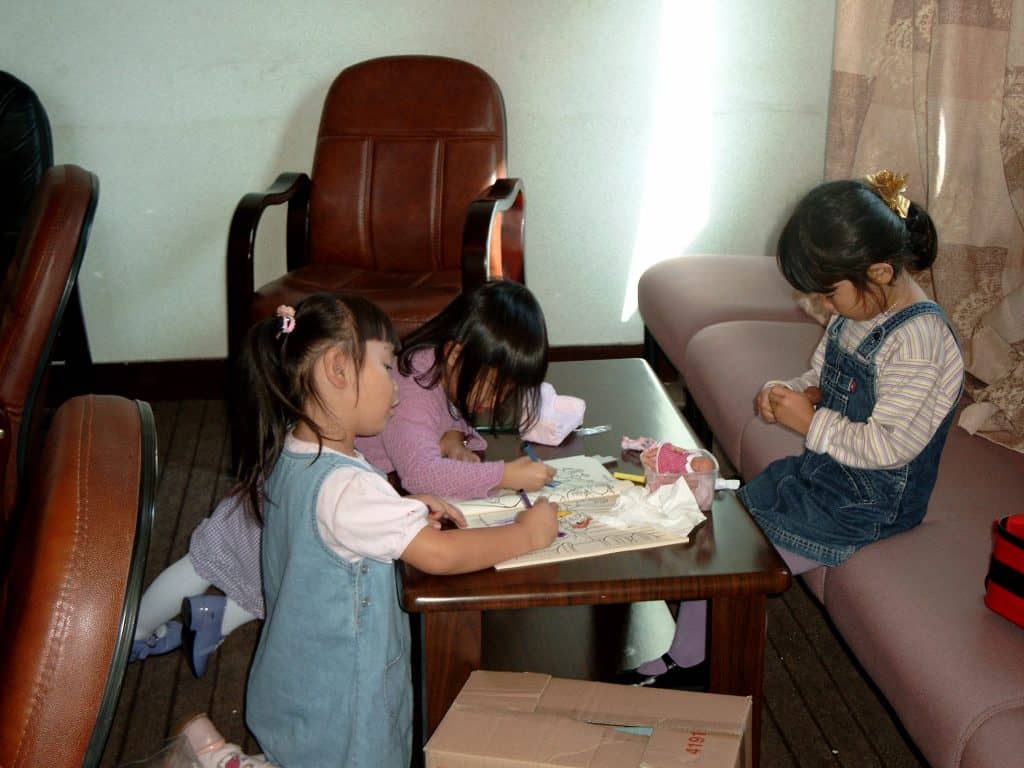 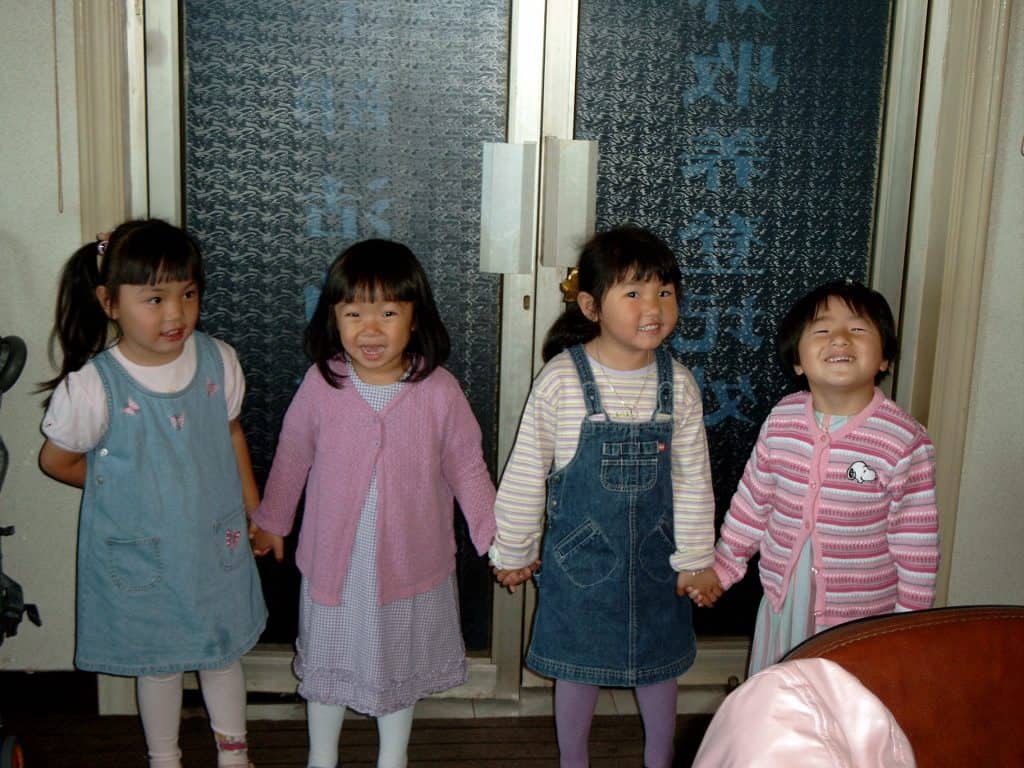 Three babies arrived at 9:30 (two had already made a brief appearance, but were ushered away).

A very shy Da Ni (Daji) arrived at 9:45, close on the heals of the Institute Director. He looked very scared and shy, head at an almost 90 degree angle to the rest of his body. Yanmei offered him Donkey (from Pooh) and some Lego figures – no takes. 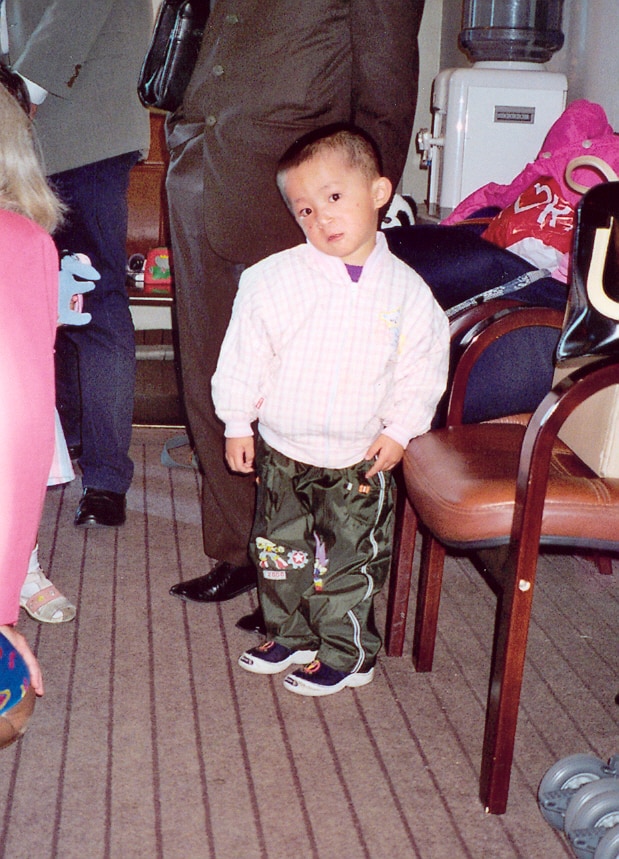 Gradually he warmed up a little and was willing to play Lego with Steven. He laughed excessively and loudly, especially at the silly things like hiding a Lego figure behind the camera and “magically” bringing it back. This was very different from our experience with Yanmei – she didn’t even smile during the first 36 hours. 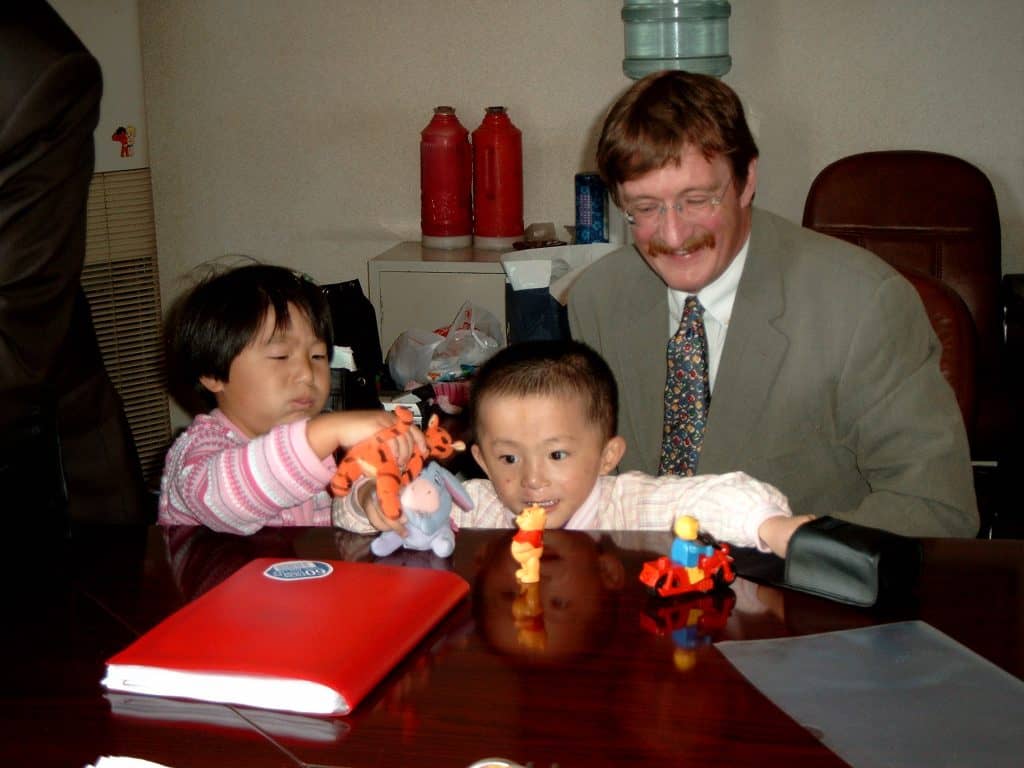 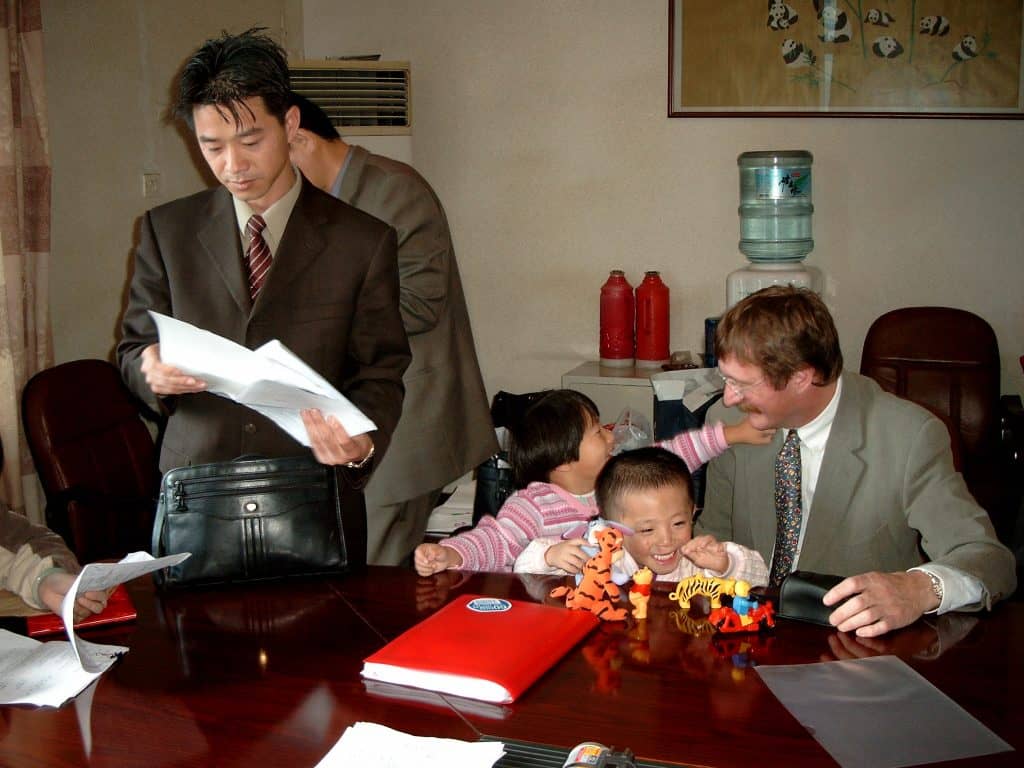 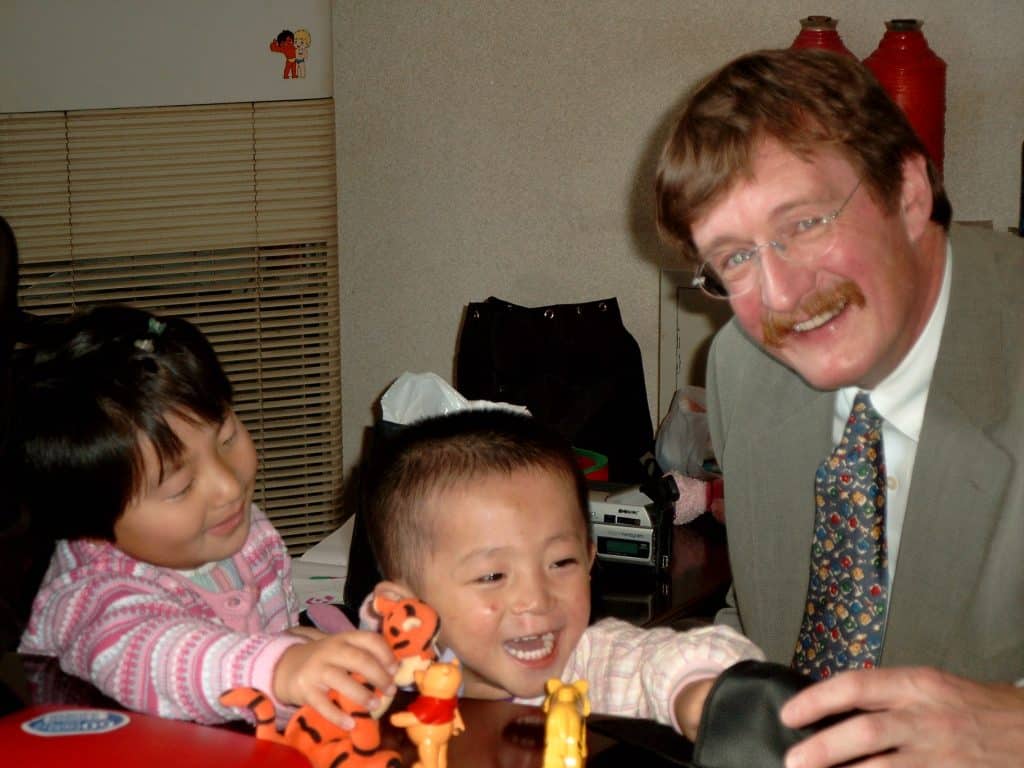 Occasionally he wandered off in the direction of the Director, just to make sure that he wasn’t alone in the world. After the paperwork was completed the Director and his assistant left, quietly and without Daji noticing. We’d given them the clothes and the Lego bricks that we’d brought with us, but on seeing how much Daji had grown since the medical information that we had received, he could have taken more with him (we eventually left it in Beijing for Christina to give to an orphanage). Daji was still happy, playing with the video camera, Lego or eating candy. As we were about to leave he noticed that the Director had left and he went hysterical (on the first of many occasions during the next week or so). Despite only being slight of stature and weight, he was fairly strong and fought against being taken out of the room.

Next stop was the photographer, which was just a few hundred meters away. Daji calmed down for the walk, but was again very upset as we entered the new building – again using all his strength to stop being taken upstairs. After a lot of coaxing he’d calmed down for the family photo. 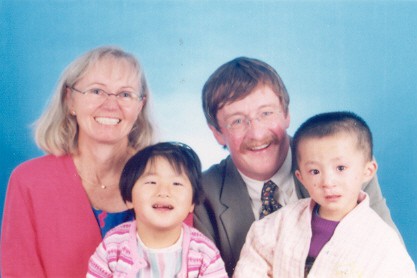 Unfortunately, they didn’t take a photo of the whole group, as they had done with Yanmei’s adoption. Whilst Lene and Yanmei went back to the hotel, Daji and Steven went for a short walk by the lake. He seemed happy, relaxed and secure as he held Steven’s hand and watched the boats on the lake and not least the cars on the road. Again he went hysterical as we entered the hotel, calmed down in the elevator – this was something new and different. 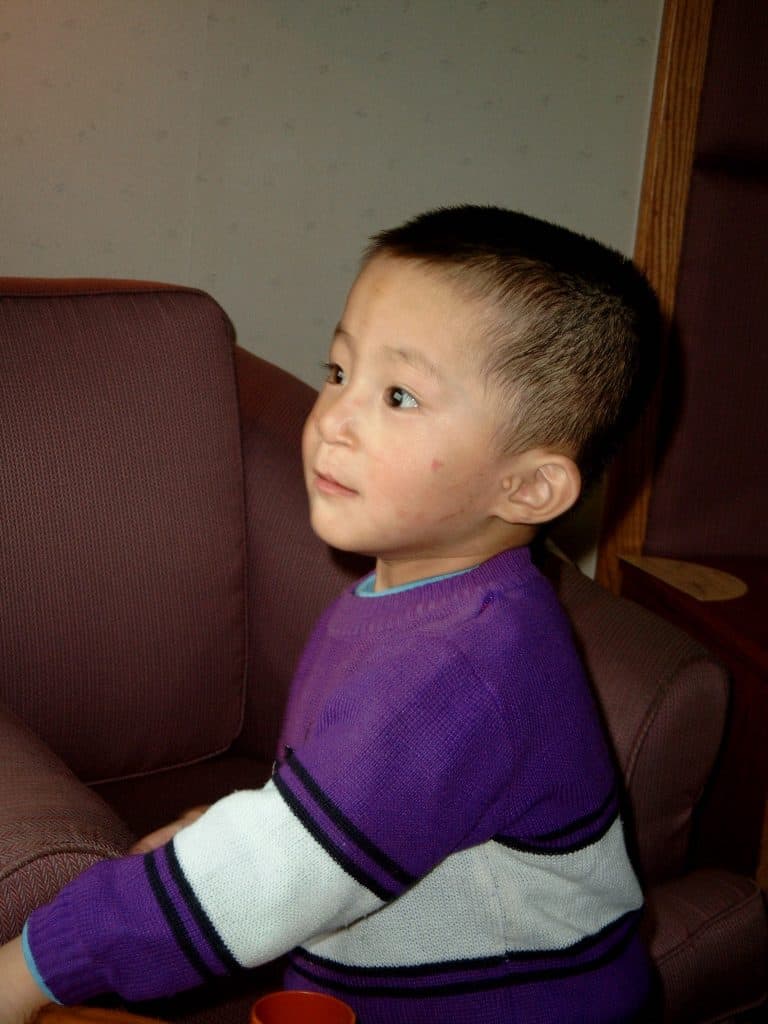 Back in the room, we let him play – he was especially interested in a wooden dog, we had something to eat and we changed his clothes. He fell asleep around 13:00 and we let him sleep for an hour (we’d been told that he usually slept in the afternoon). The Director had told us that he was potty trained, and this certainly seemed to be the case. Each time he wanted to go to the toilet, he came and took Steven by the hand. He must have a weak bladder as the toilet was visited many times. 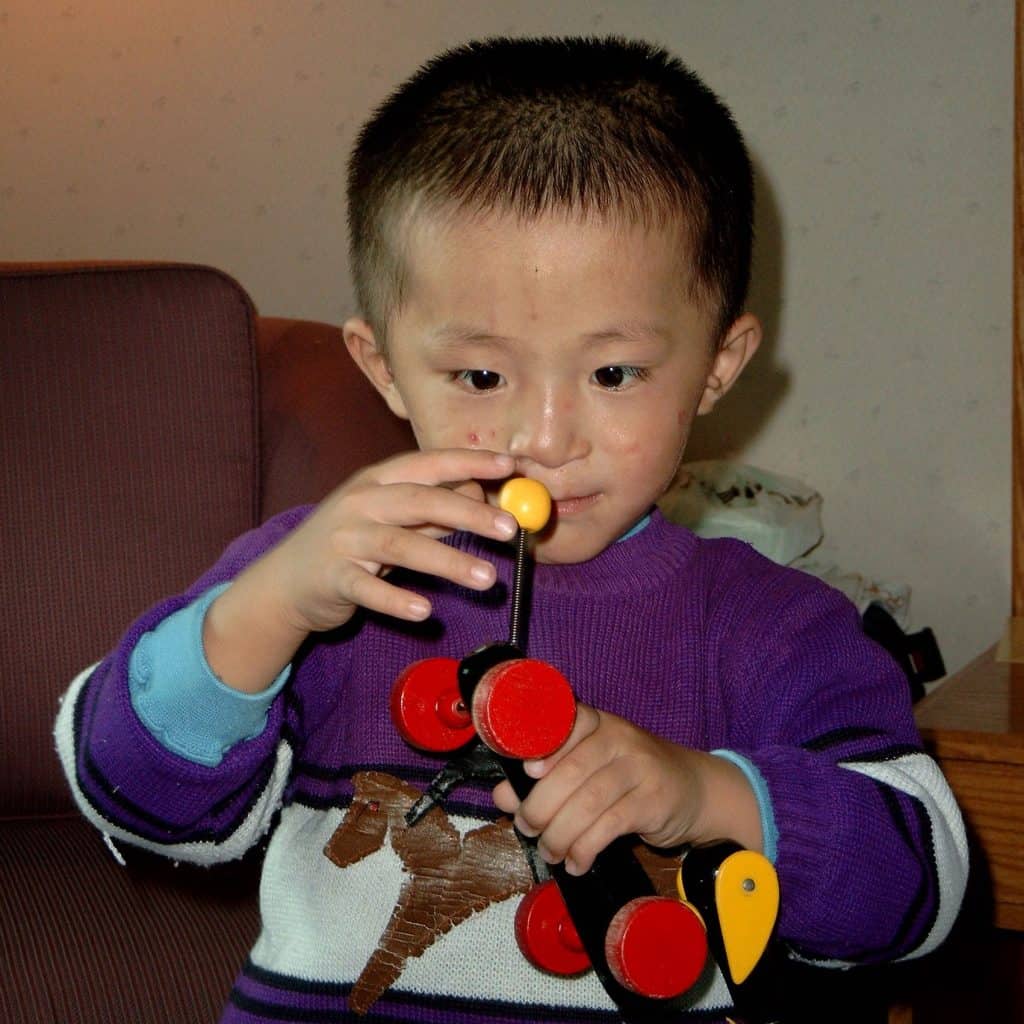 We decided to go for an afternoon walk after his sleep – and even more visits to the toilet. However, 30 minutes later we realised that he was wet – back to the hotel and start using nappies!

The family picture wasn’t supposed to have Yanmei on it, so we had to go back to the photographer. Yet again Daji was upset going into the room, but again calmed down when the picture was to be taken – he almost looked happy. 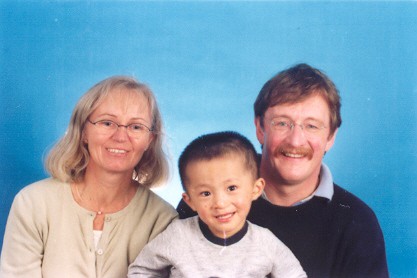 Back at the hotel, Daji’s mood changed between calm, loud laughter and hysterics. He was calmest whilst watching cartoons on TV. His only contact was with Steven.

Dinner was at the Chinese restaurant in the hotel – a real improvement compared to the western buffet. Daji couldn’t eat with chopsticks, as we’d been told; but could eat rice and egg pudding with a spoon. He flatly refused to eat anything at all that was green! His “table manners” were excellent – he could eat alone, without dropping food from his spoon.

Back in our room, we waited for the visit of the Chinese doctor. An middle-aged Chinese lady examined Daji and said he was in good health, “a cheeky boy with good teeth!” (she actually said naughty, but we took this to mean cheeky). Her verdict was that she didn’t find anything in particular to be concerned about. We put him to bed at around 21:00, and he fell asleep about 30 minutes later. Steven had to lie next to him, he certainly didn’t feel safe enough to be sleeping. 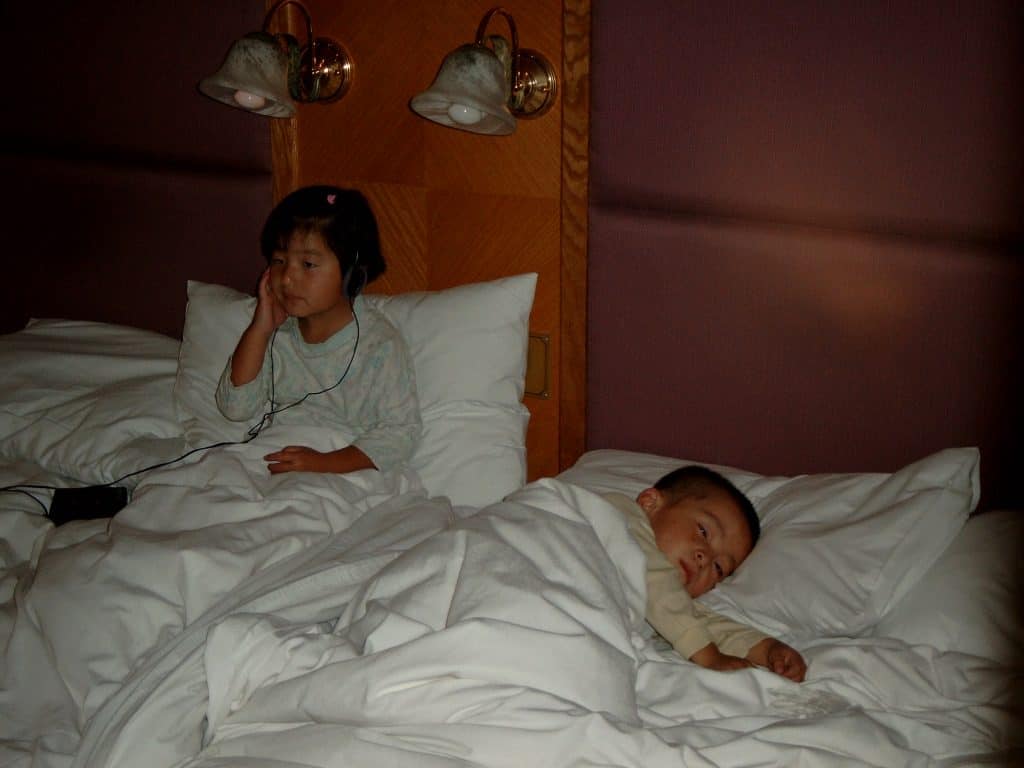 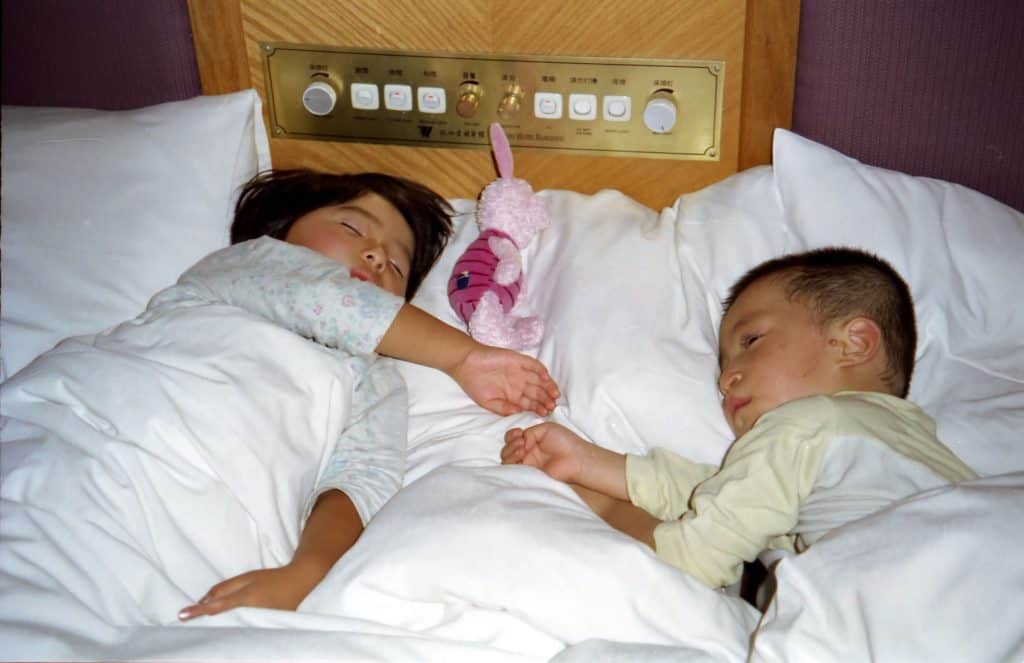 All four of us slept in the two double beds that we’d pushed together – Lene on the outside, Yanmei, Daji and then myself in against the wall. It worked fine. Tired after an emotionally hard day, we went to bed concerned about how Daji would react the next day – and whether he would sleep through the night. He slept all night – with his eyes OPEN!

We were left in a hotel room in Hangzhou, Zhejiang Province in China. A long way from home, with lots of impressions of the first day with our new son. Part of the shock was that his reaction was SO different to Yanmei’s. We know that no two children react the same way, but to adopt two children that reacted so differently was more than we had expected.

To characterise him after the first day, we had the following observations: