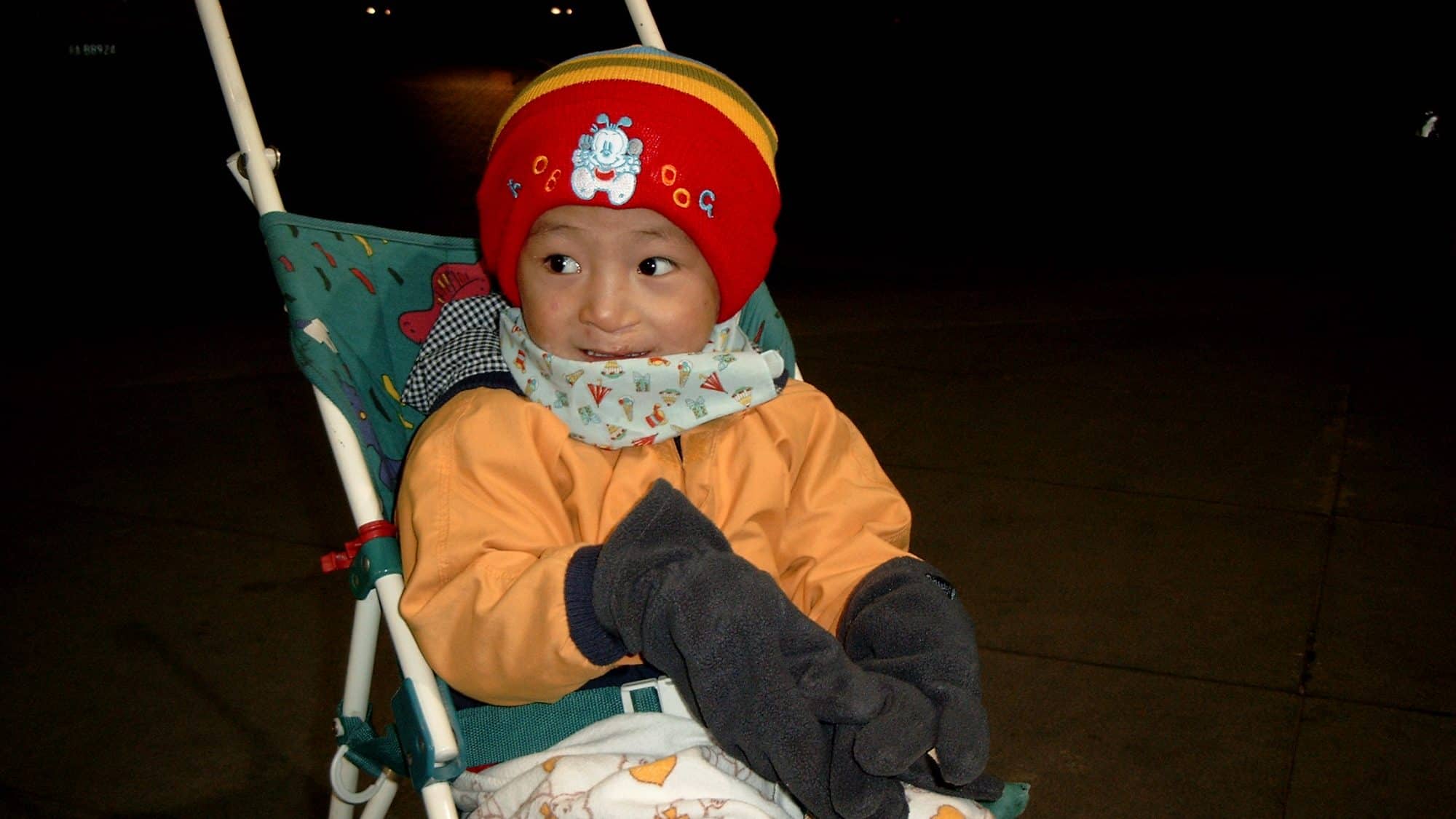 Today we left Hangzhou – and of course the sun was shinning. We checked out and left the hotel at 6:30am; ready for a 8:10 am flight – why did we have to take such an early flight? By the time everybody had arrived, paid their bills and loaded the baggage into the mini bus, we were a bit short on time. We arrived at the airport with 45mins to spare before take off. It took ages and ages to check in and by the time we got through the security check, everybody had boarded and they were waiting for us.

Our plane, F6 5941 left on time and Daji boarded a plane for the first time (we imagine!). He sat next to the window, but didn’t look out – he preferred to have the blind rolled down. He ate the supplied breakfast, conge – a kind of porridge made from rice. He had a single burst of bad temper, at which point a Chinese lady came up and said something to him – he promptly stopped – if only we knew those magic words! 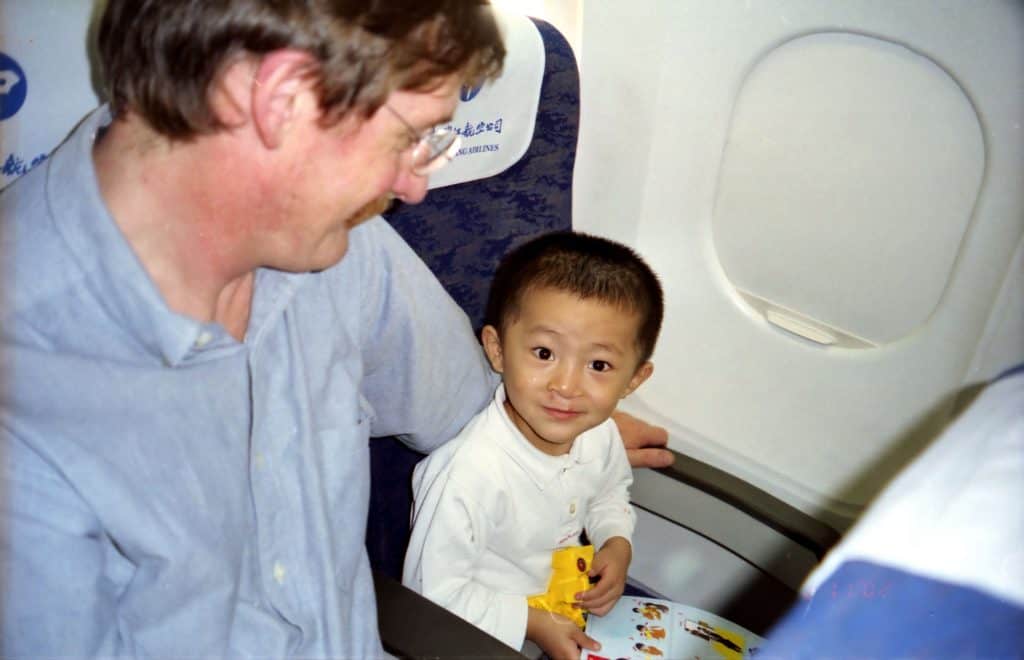 The Chinese bus was waiting for us; with a new guide. This time we had even more baggage and 4 new children – but somehow we all fitted in. Back at the hotel we had to wait for the rooms; but they managed to find rooms next to each other. We unpacked and took a short rest – we’d been up since 5:30am. Daji slept for an hour.

It was cold and windy in Beijing, so we wrapped ourselves up and decided to walk into town. Daji had been given some chocolate, so just before we left the hotel, Steven unwrapped it and gave it to him – he went hysterical. So we gave him a new piece that he could unwrap himself. He calmed down but still whimpered. He tried to unwrap the new piece but couldn’t. He gave it to Steven to unwrap – once unwrapped, Steven tried put it in Daji’s mouth. He refused and wanted it in his hand, so Steven gave it to him – expecting him to eat it, but he just wanted to hold it in his hand. It started to melt, so Steven took it out of his hand and tried to explain why he had to eat it now. He refused and screamed. Steven tried to quiet him down by stroking and holding him – he fought against. Lene and Yanmei had left and were waiting outside, so Daji and Steven had a trip down the elevator, through the hotel lobby and out onto the street with Daji screaming at the top of his voice. On the street he calmed down a bit but was still fairly hysterical – we couldn’t do anything to stop him. We felt that everybody was watching us, wondering what two foreigners were doing to him. He carried on for over 30 minutes – well over half way into the centre of Beijing. 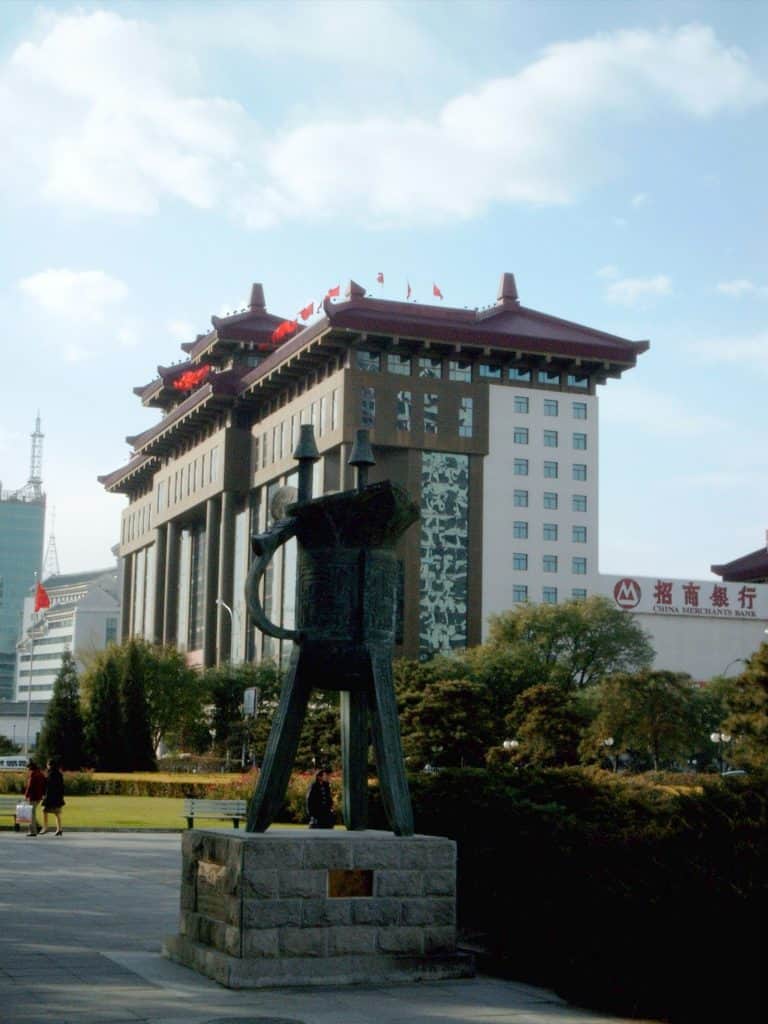 This was also something we had noticed earlier – sometimes he would just continue to whimper and complain, a long time after the actual event – it was as if he couldn’t snap out of it. Previously he stopped if you raised your voice, but this time it had no effect. 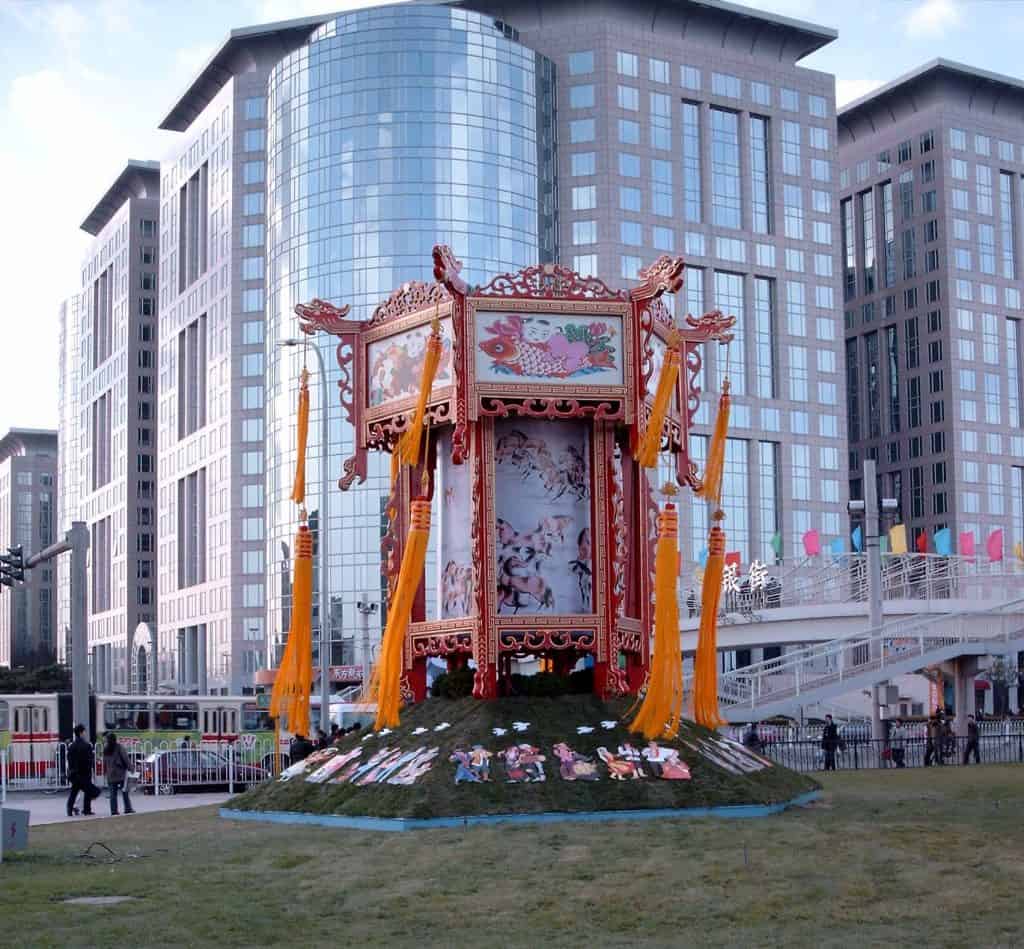 Walking into Beijing, you can see all the changes that are taking place, including the completion of many of the buildings that were under construction the last time we were here (2000). We shopped and found some clothes for Yanmei and Daji, a Chinese Barbie doll and clothes for Yanmei (her big sister present) and strolled through yet another new shopping centre; this time packed with tourists and Chinese alike. 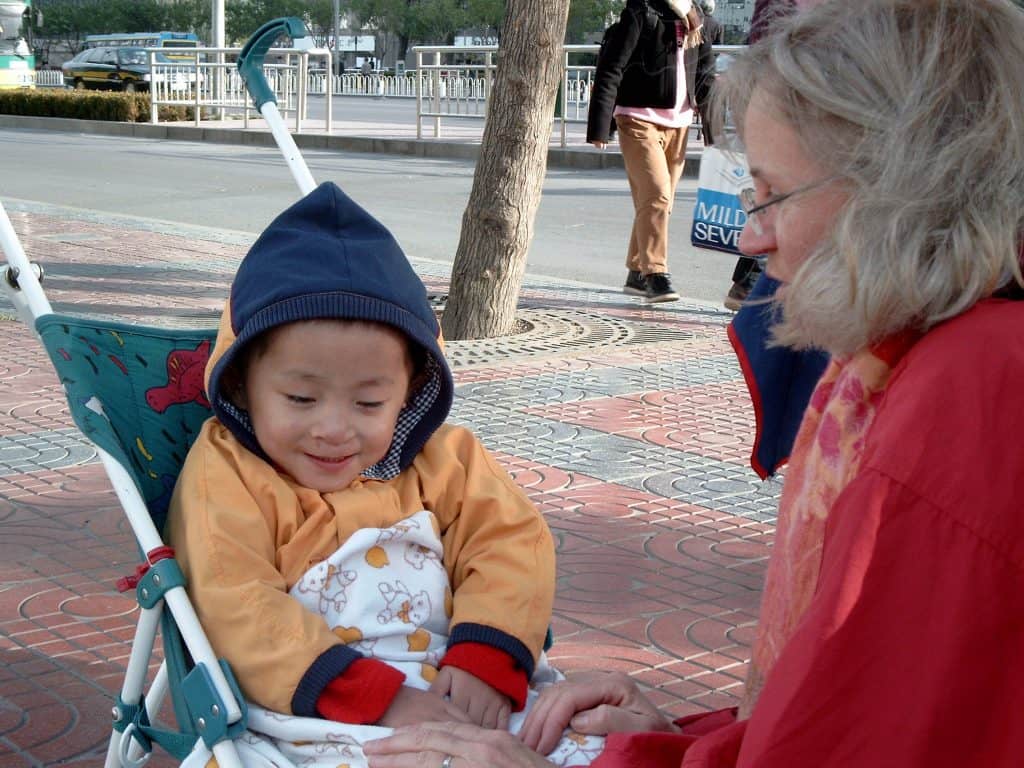 We took pictures of Yanmei and Daji sitting in the bronzed statue of the man and the rickshaw, just as we’d done with Yanmei and Thomas back in 2000 – Yanmei was just as unhappy this time as last time. Sooner or later we’ll get a good picture of her with the man pulling the rickshaw. We walked back to our hotel in the now bitter cold, and on the way back, bought some food at the convenience store next to the Silk Market. 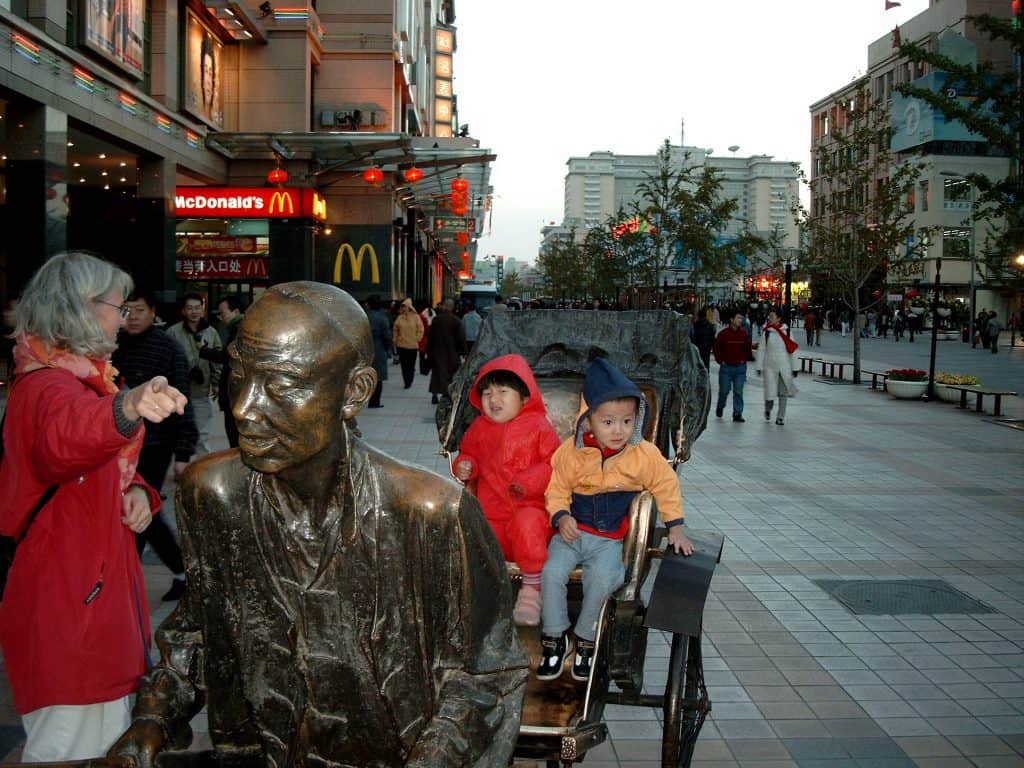 Whilst Lene was inside, Yanmei, Daji and Steven were surrounded by scarf sellers, not trying to sell scarves, but interested in knowing why we had not only one, but two Chinese children. Again they expressed their gratitude to us adopting Chinese children and wished us all the best. They also questioned his age!

We spent a quiet evening at the hotel, before falling asleep – early.

After Daji’s hysterical outburst in the afternoon, the uncontrollable laughing had returned. We don’t know what caused it – perhaps the change of scenery, although we don’t think so. Whatever it was, it brought our concerns back to the surface.