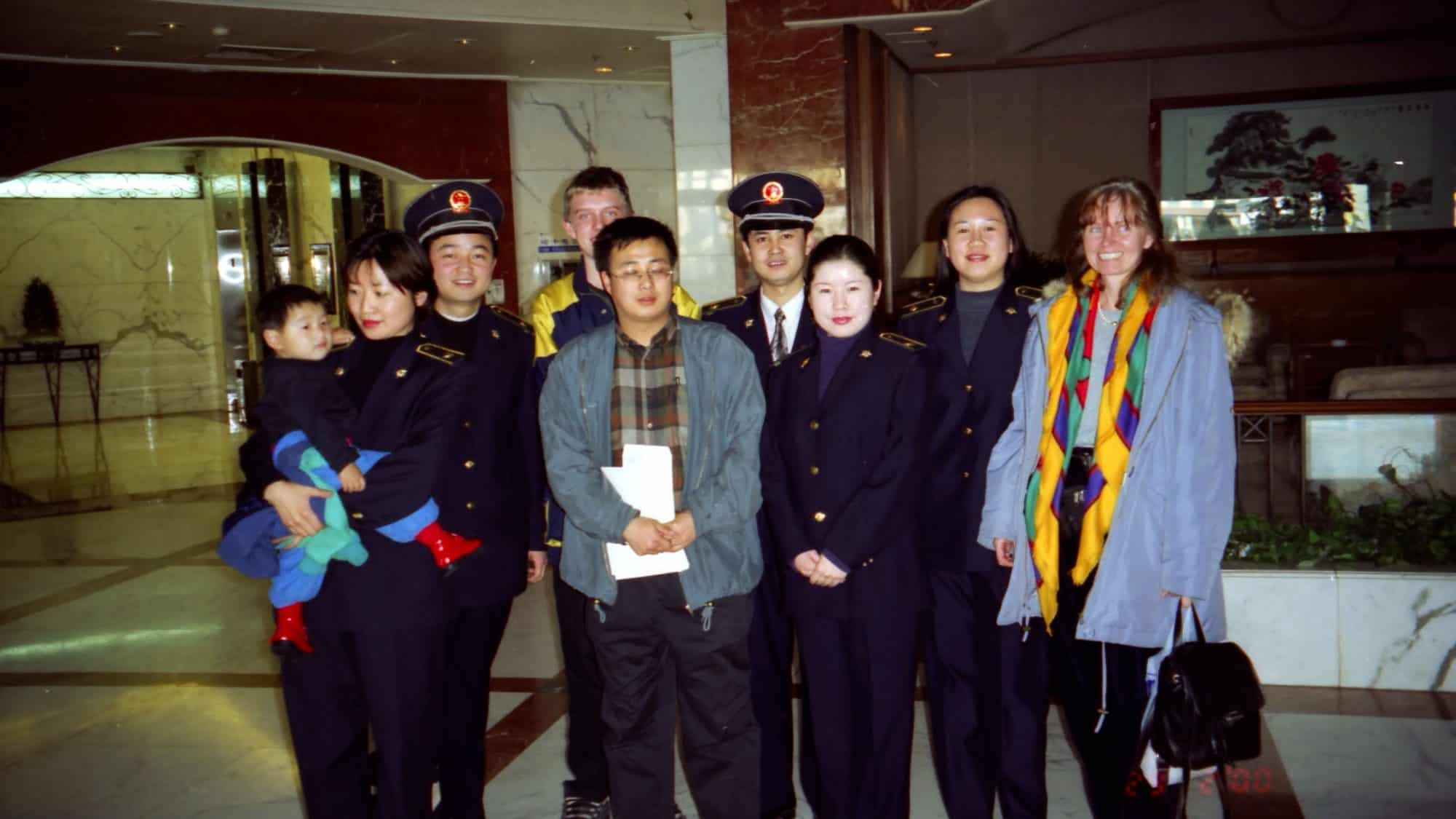 After a late breakfast and some time alone in our room, the next stop was the passport office. This wasn’t far from the hotel, but as usual, we were driven. Once there, we didn’t have do anything, just show Yanmei to the official behind the counter and pay the 125RMB. Steed and the Director of the orphanage did all the paperwork. As we waited outside the office about 100 people congregated on the other side of the fence just looking and pointing – now we know what the animals feel like in the zoo! We were there about 1 hour. We would get the passports the next day.

We said goodbye to the Director of the orphanage and handed over our gifts – including the Duplo that Lego had donated and Jens and Gunhild had brought with them. We posed for goodbye pictures, even the lady that issued the passport wanted her picture taken with Yanmei. 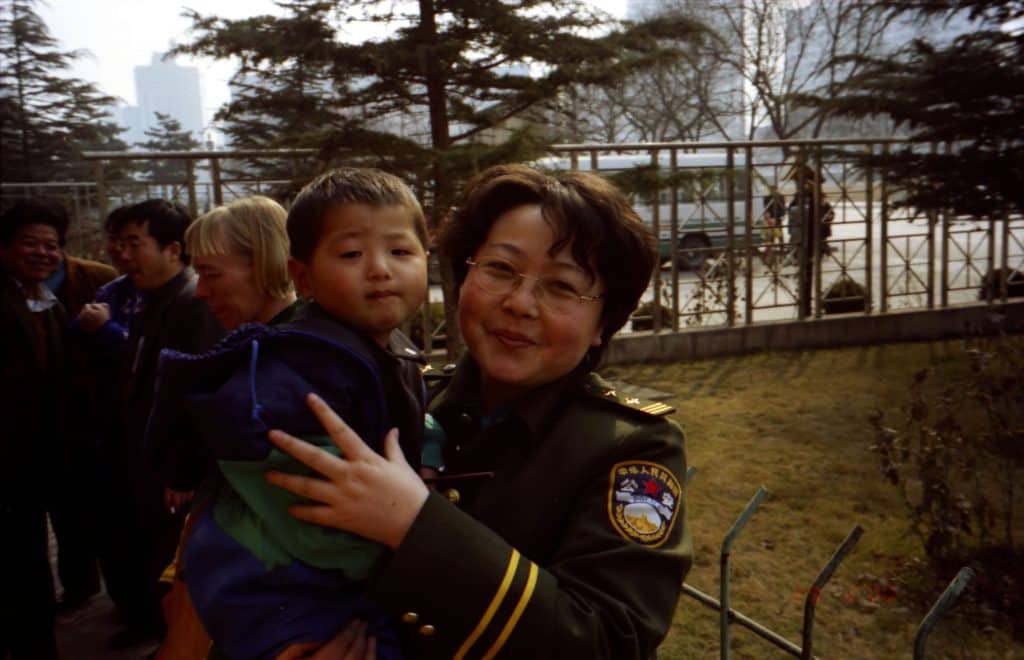 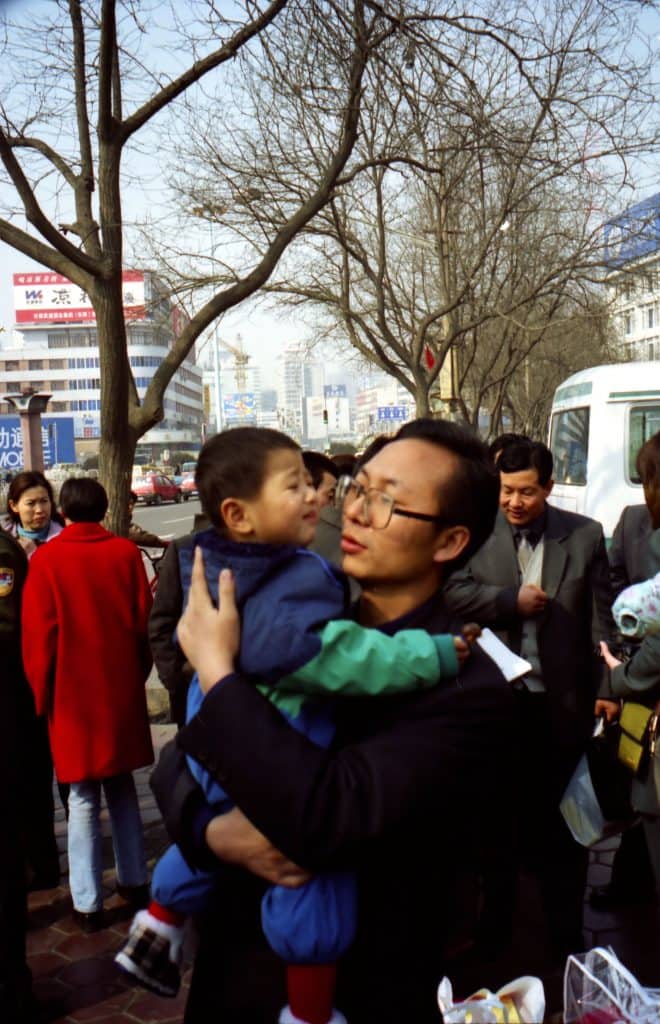 We had lunch at a nearby hotel. The food was so-so, certainly the worst we’d have in Lanzhou. Yanmei stored food in her mouth again. 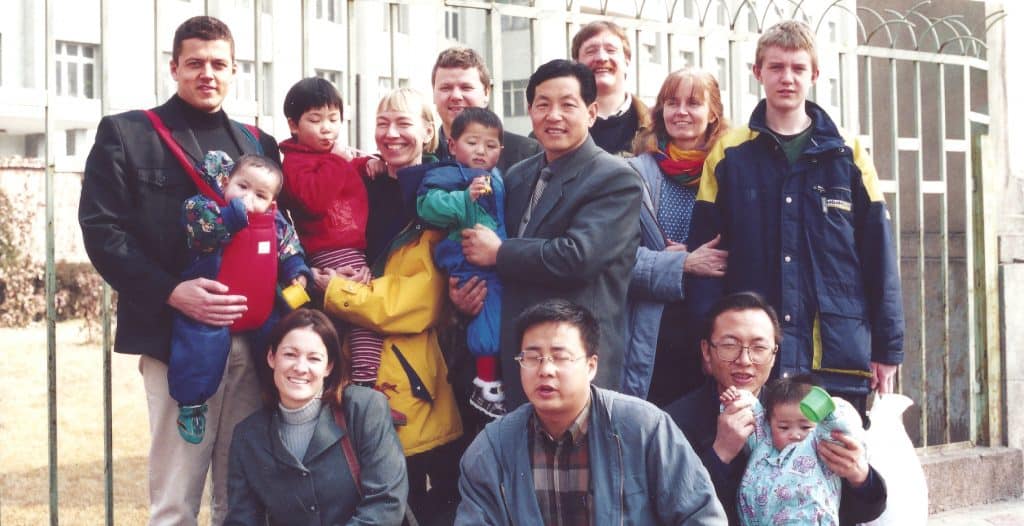 After a quick change of nappies some of us went downtown to the shopping area. We didn’t buy much – a few CD’s, a small train for Yanmei – she kept taking Amanda’s rattle – and tea. I’m sure that there were lots of good deals that we missed!

Back at the hotel we participated in the official ceremony for the adoption of our children. The notary officials participated in full uniform. The official documents were handed over to us and lots and lots of pictures were taken – all possible combinations. They thought Thomas was much older than he was, and were highly embarrassed when they realised that he was only 13! 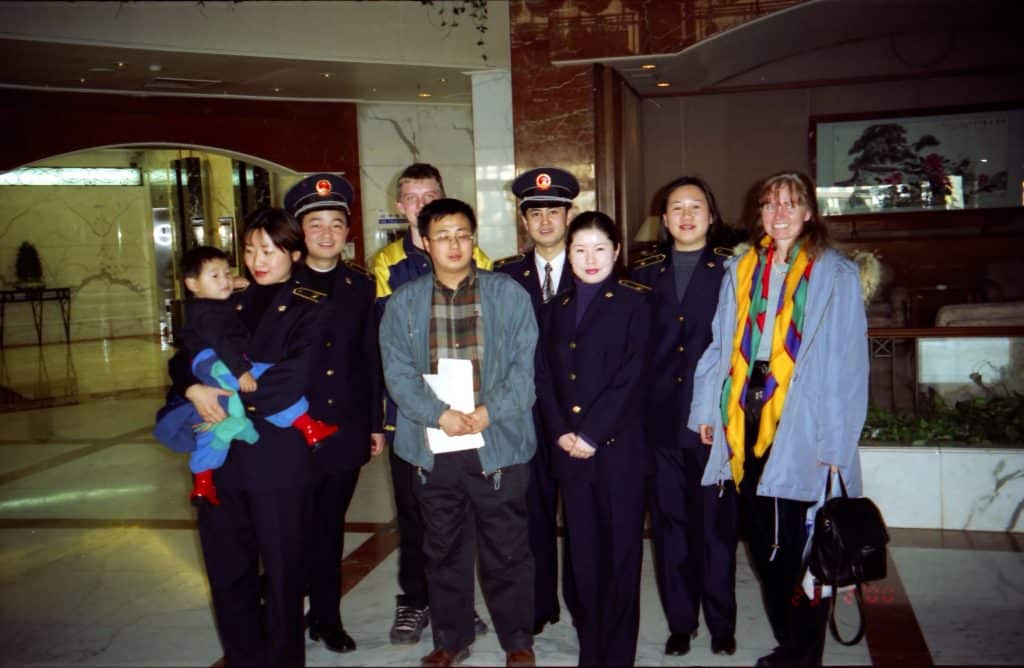 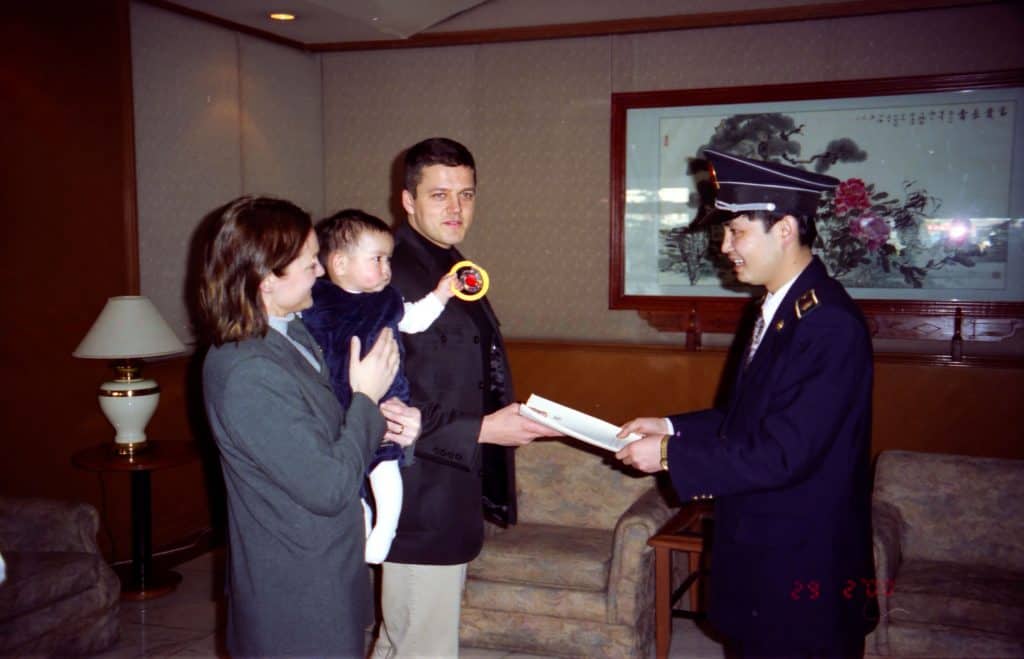 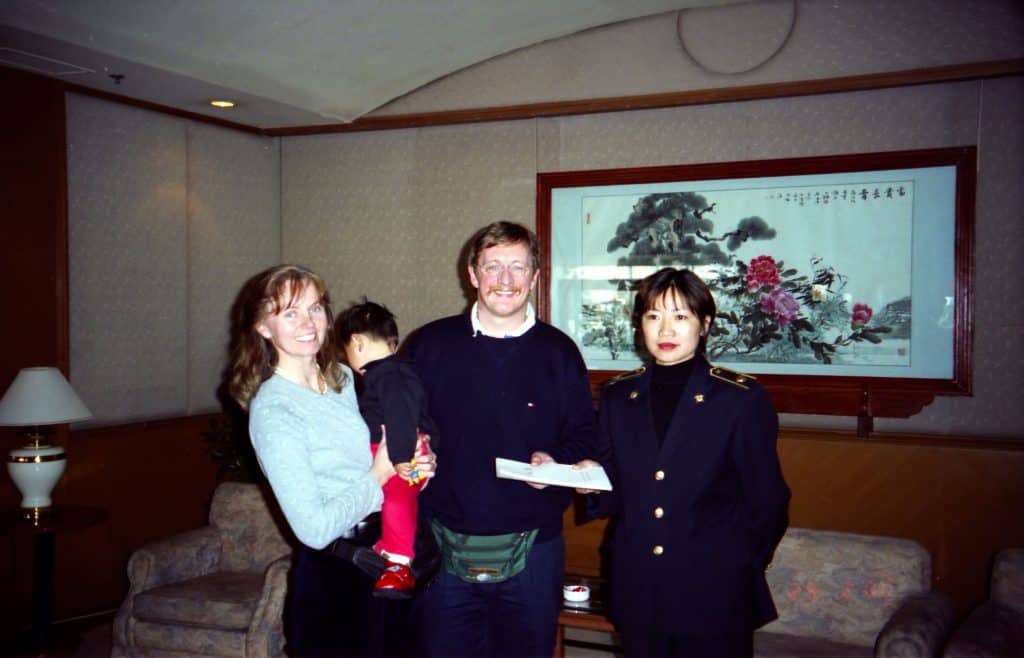 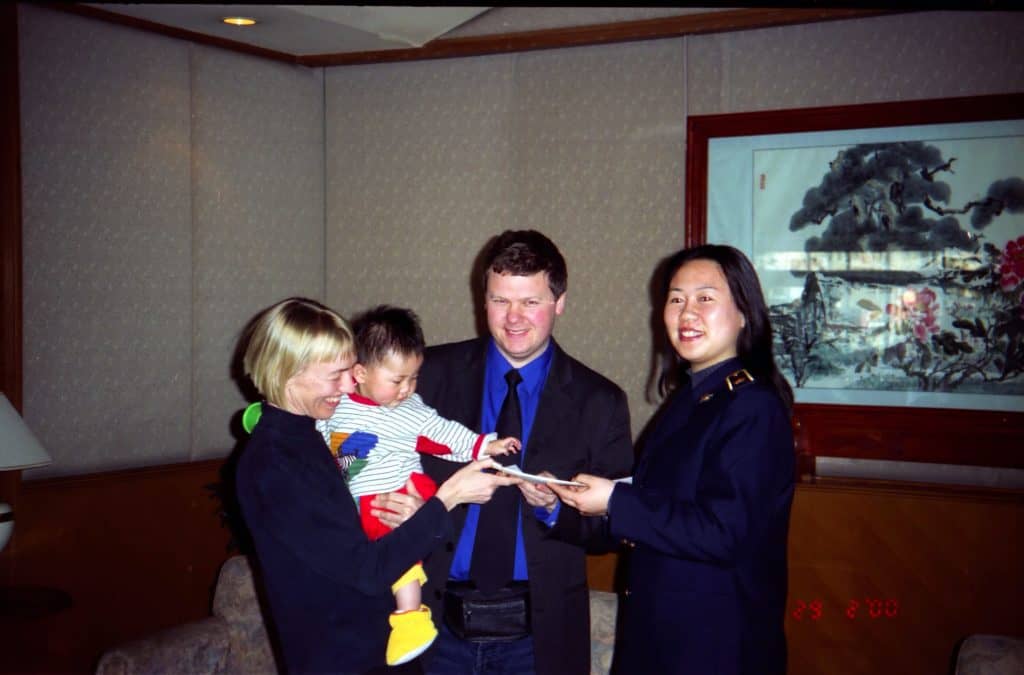 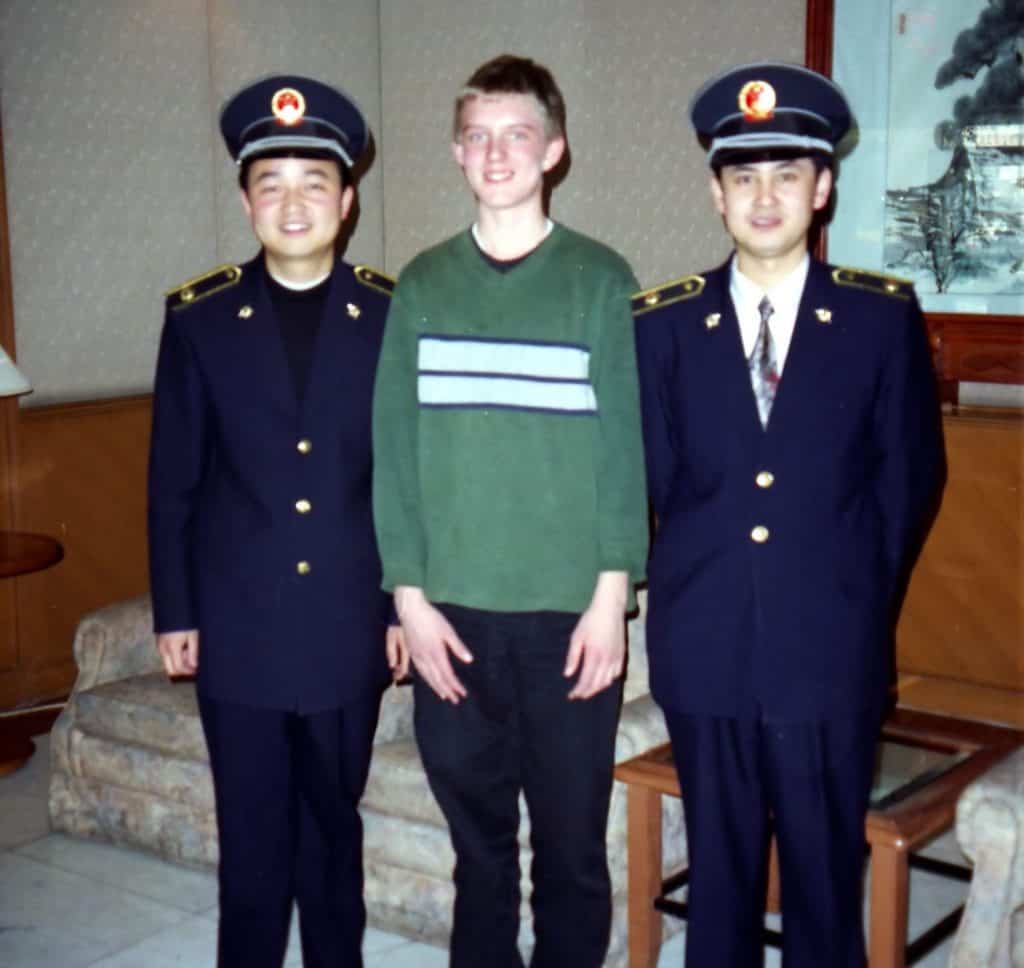 Yanmei stayed with Thomas whilst we shopped for something to eat in the Yellow Building. We ate in our room.

Yanmei’s transformation was amazing. She played with Thomas, laughed and made lots of sounds. She lifter herself up for the first time after falling on her back; she walked around the room, holding onto things and best of all took her first 30-40 steps without support – walking around the elevator area. Contact was good and it sounded as though she tried to repeat some of the things that we said. The beer Steven had bought at the grocery store wasn’t beer at all – what a let down.

Lene called home to say that everything was going OK. And now we had the official adoption document. 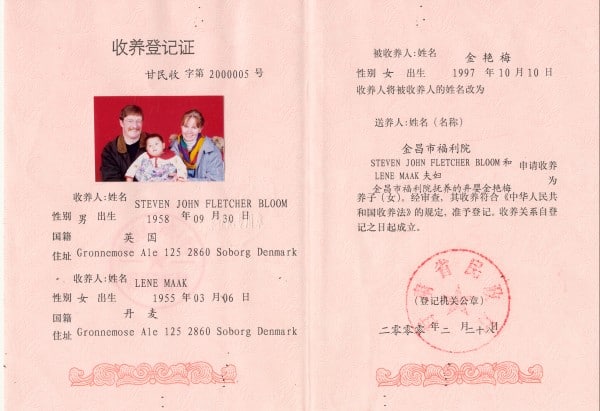