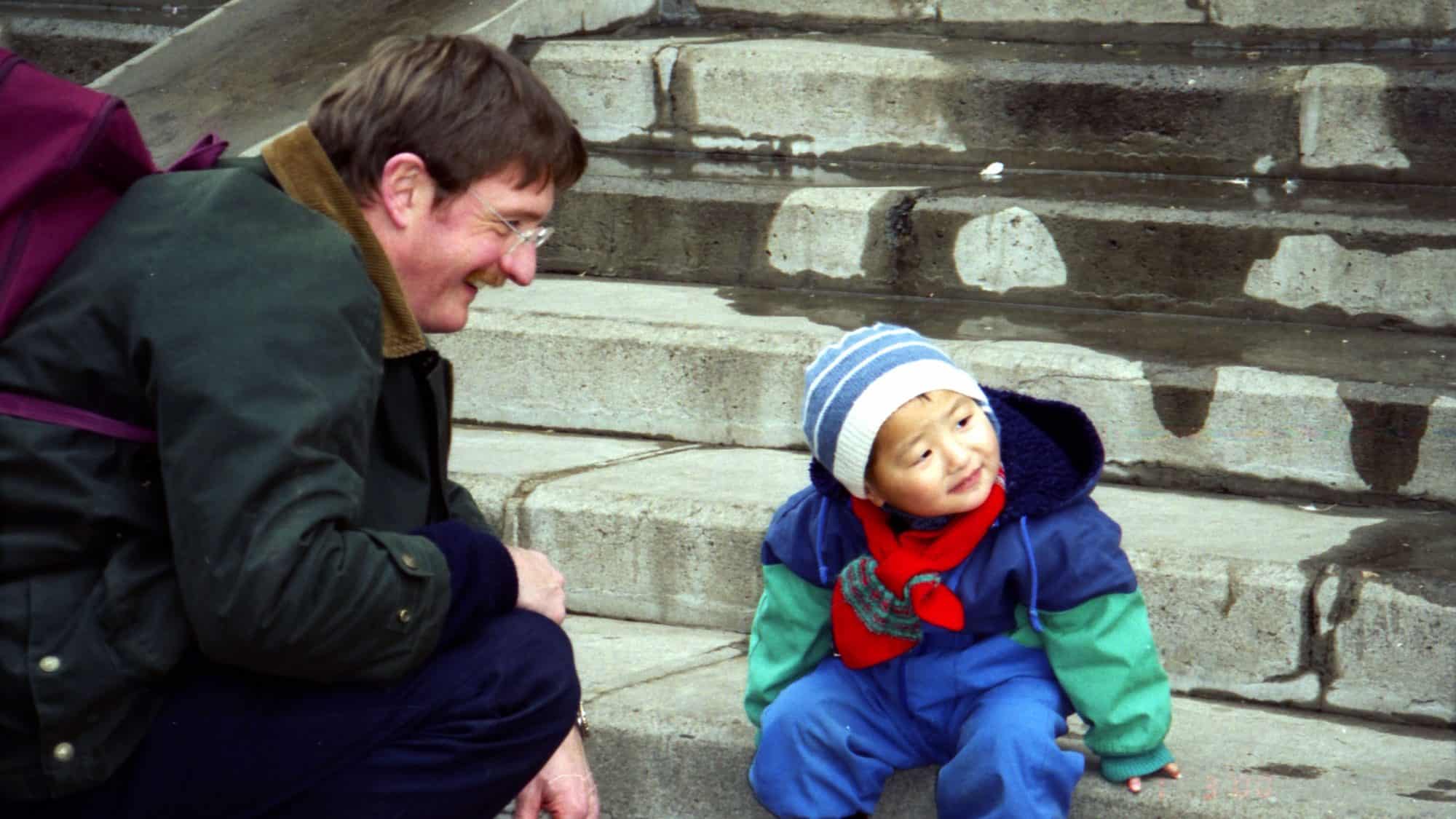 Again Yanmei slept all night and woke around 8:30am. She sucks her finger and puts her arm over her face when she rests. Another late breakfast – but again everybody else was late as well. At breakfast the only other foreigner staying at our hotel, an Australian, came over to congratulate us with the adoption of our daughters – he told us that he’d also adopted many years earlier, so he knew how happy we must be. 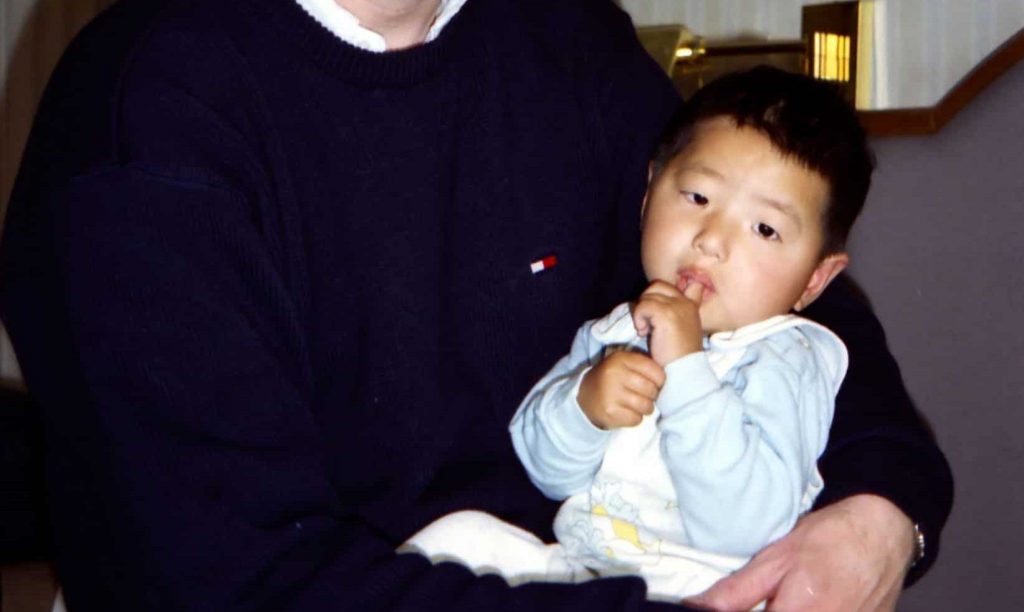 We lounged around during the morning and spent lots of time watching the traffic in the intersection below – we didn’t see a single accident, which was really amazing considering the number of cars, bikes and people crossed the intersection. in what seemed a totally ad hoc manner. Yanmei practiced her walking. 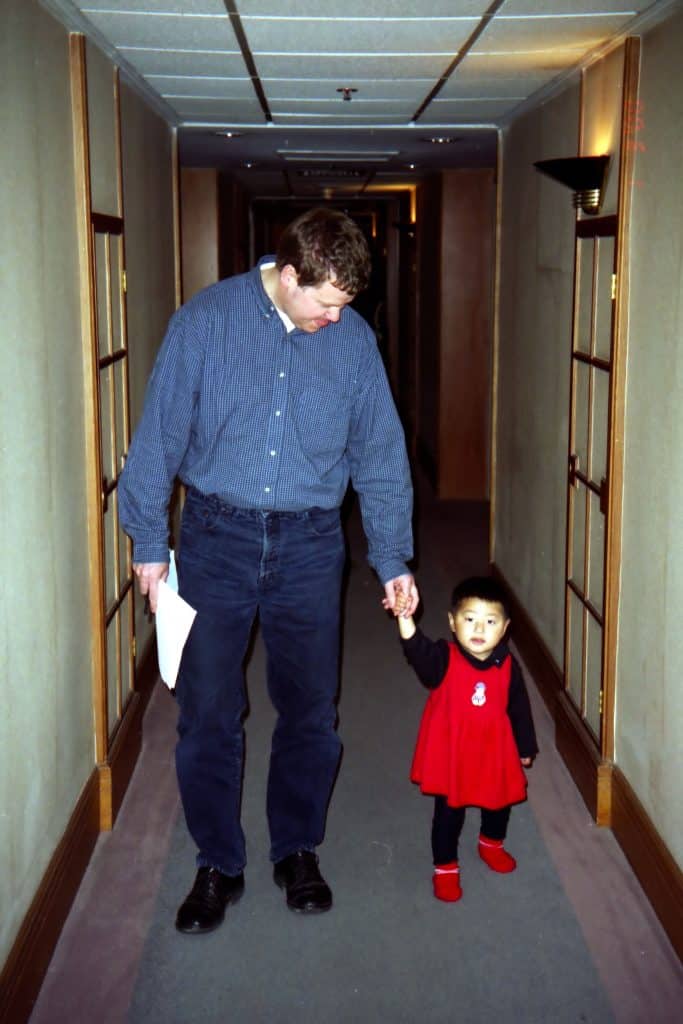 We met Steed after lunch – for more sightseeing. The Chinese are very proud people and love to show off the sights of their town. This time we were off to the Five Springs Hill and the Zoo. We drove through some suburbs and got off the bus in front of a large decorated entrance. We walked up the hill to a Buddhist Temple – according to Steed preserved during Cultural Revolution by hiding it behind planks and painting revolutionary slogans on the planks, so that the soldiers daren’t do anything with it. The bronzed Buddha statue was the main attraction, it was very impressive.

Five Springs Hill got its name because of the five springs on the hill. Legend has it that in the time of Hanwudi, when Huo Qu Bing went on his campaign against the Xiongnu, he stationed his troops at the bottom of Gaolanshan hill. The soldiers were tired and thirsty. When Huo stuck his staff into the ground, at once five springs welled up. These were the five springs later named Ganlu, Juyue, Mozi, Meng and Hui.

Five Springs Hill also has the important cultural relics, the “Taihe Tiezhong” and the “Tong Jie Yin Fo”. The Taihe Iron Bell was forged in the second year of the Jin Dynasty’s Zhangzong Taihe (1202 AD). The modelling is imposing and the sound is loud and clear. The “Tong Jie Yin Fo” (bronze Buddha) was forged in the third year of the Ming Hongwu emperor (1370 AD). The metal work is elegant and lifelike. These relics are two of Lanzhou’s earliest stone and metal cultural relics still in existence, and both have been classified key protected relics by the Province.” Translated from Duan, Qi & Li eds., Gansu Tourist Guide (1982), China Tourism Publishing House, Beijing. 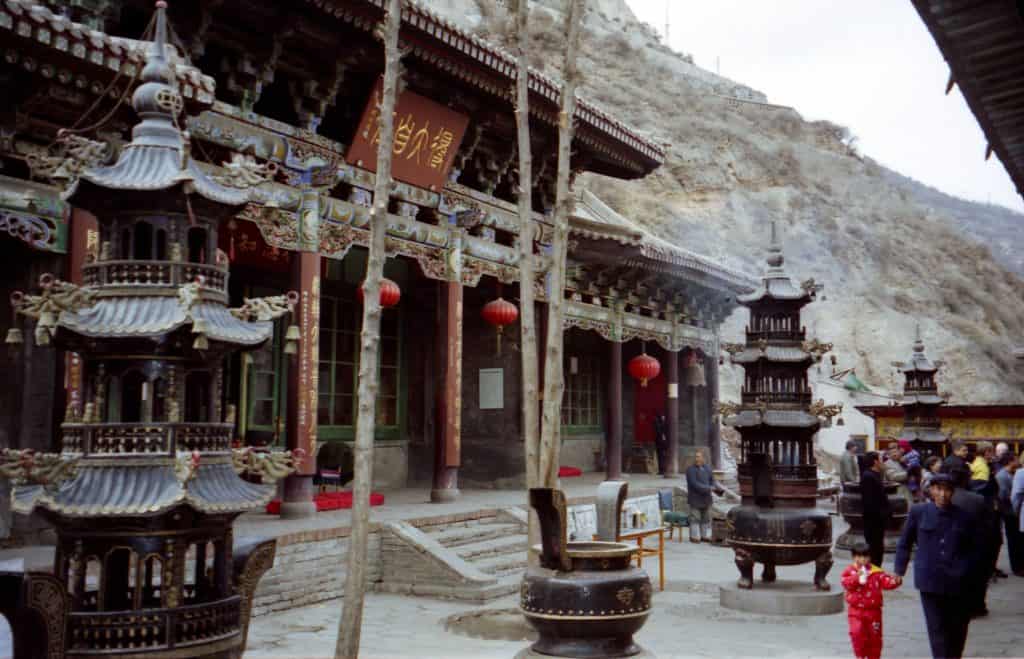 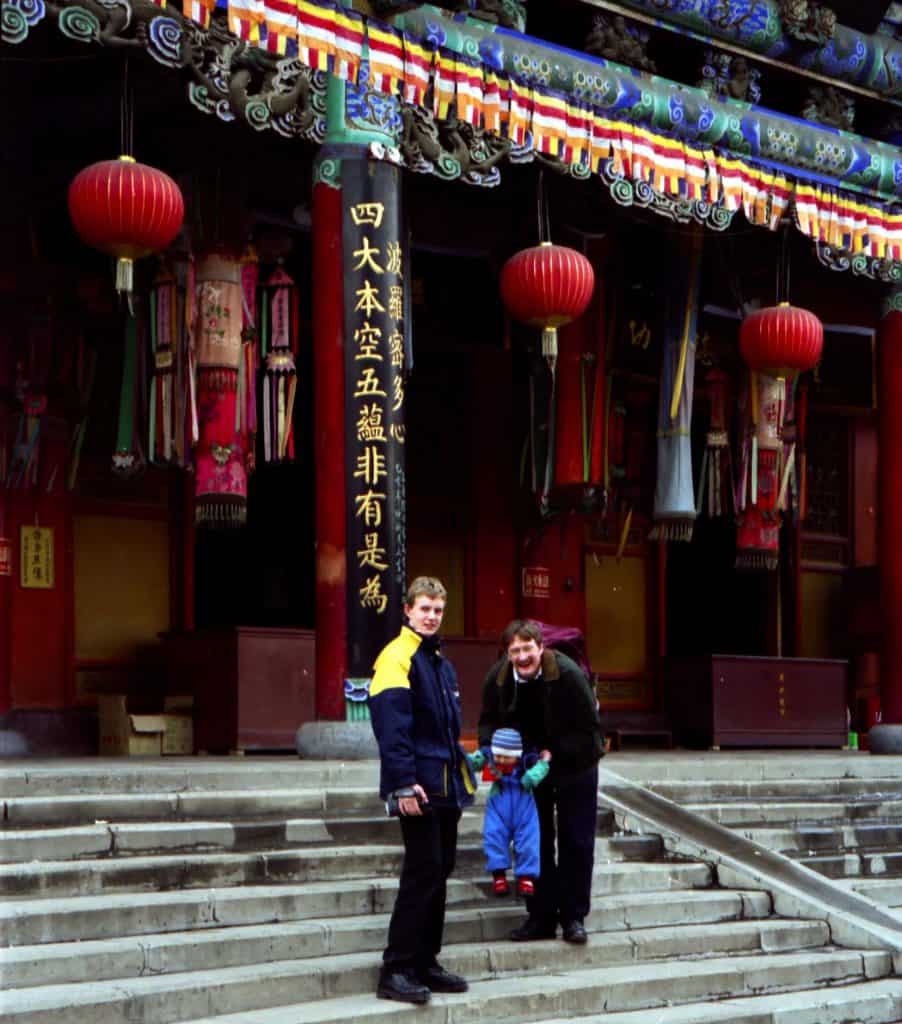 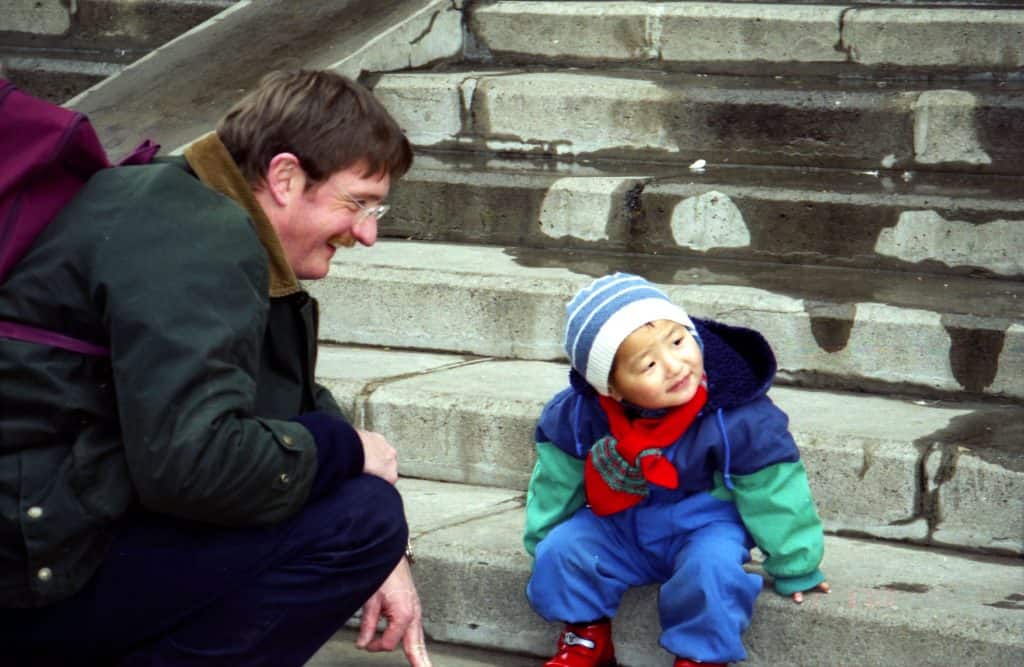 We continued onto the Zoo – unfortunately the Panda’s weren’t out on this particular day and the rest of the Zoo wasn’t really worth visiting. Yanmei practiced her walking – she took her first outdoor steps, and just continued to walk and walk. She’s becoming more and more open. She recognises us and reacts when she sees us, she smiles a lot and makes lots of sounds – but no real Chinese words – except perhaps “Wo chou va” – which we don’t understand and she never says it in the presence of others, who may have understand what she said. 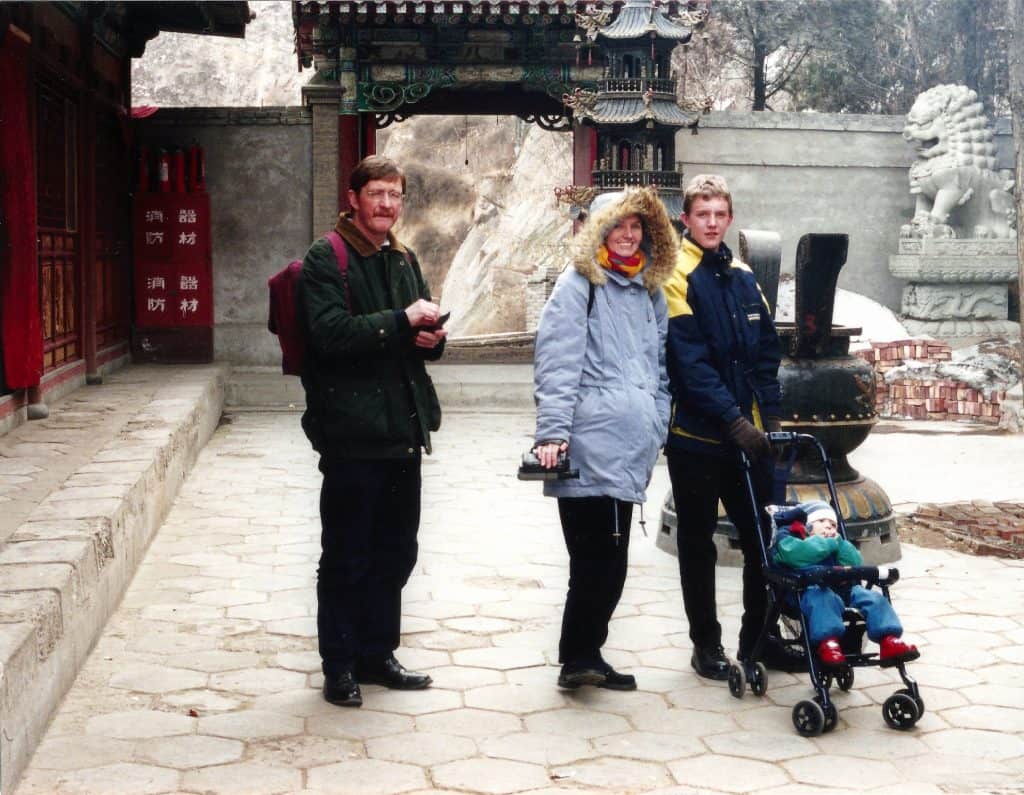 Back at the hotel, Steed took Jimmy, Thomas and Steven down some back-alleys to an area where counterfeit CD’s are made. There we 30 or so shops, all selling CD’s. For dinner we met Steed and went to the restaurant close to the hotel where we’d eaten, both on Sunday and Monday. Steed ate with us and the chef treated us to an exhibition of noodle making – impressive, but not to be tried at home. Thomas stayed at the hotel – he was feeling tired and was probably a bit homesick.

At dinner we received Yanmei’s Chinese passport from Steed. 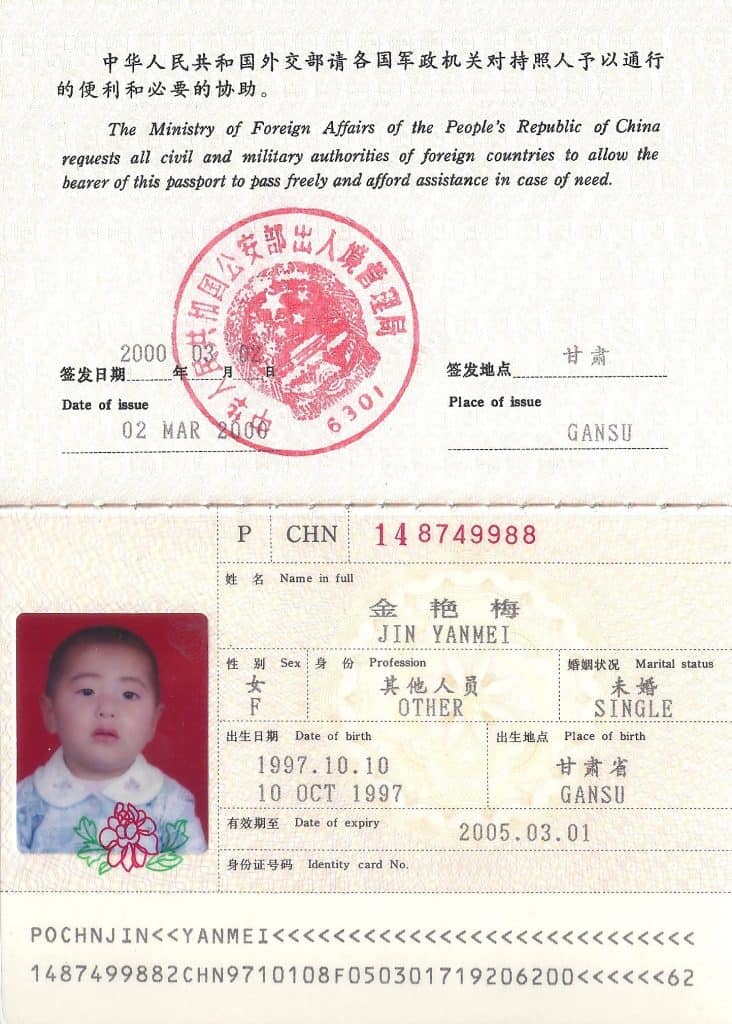