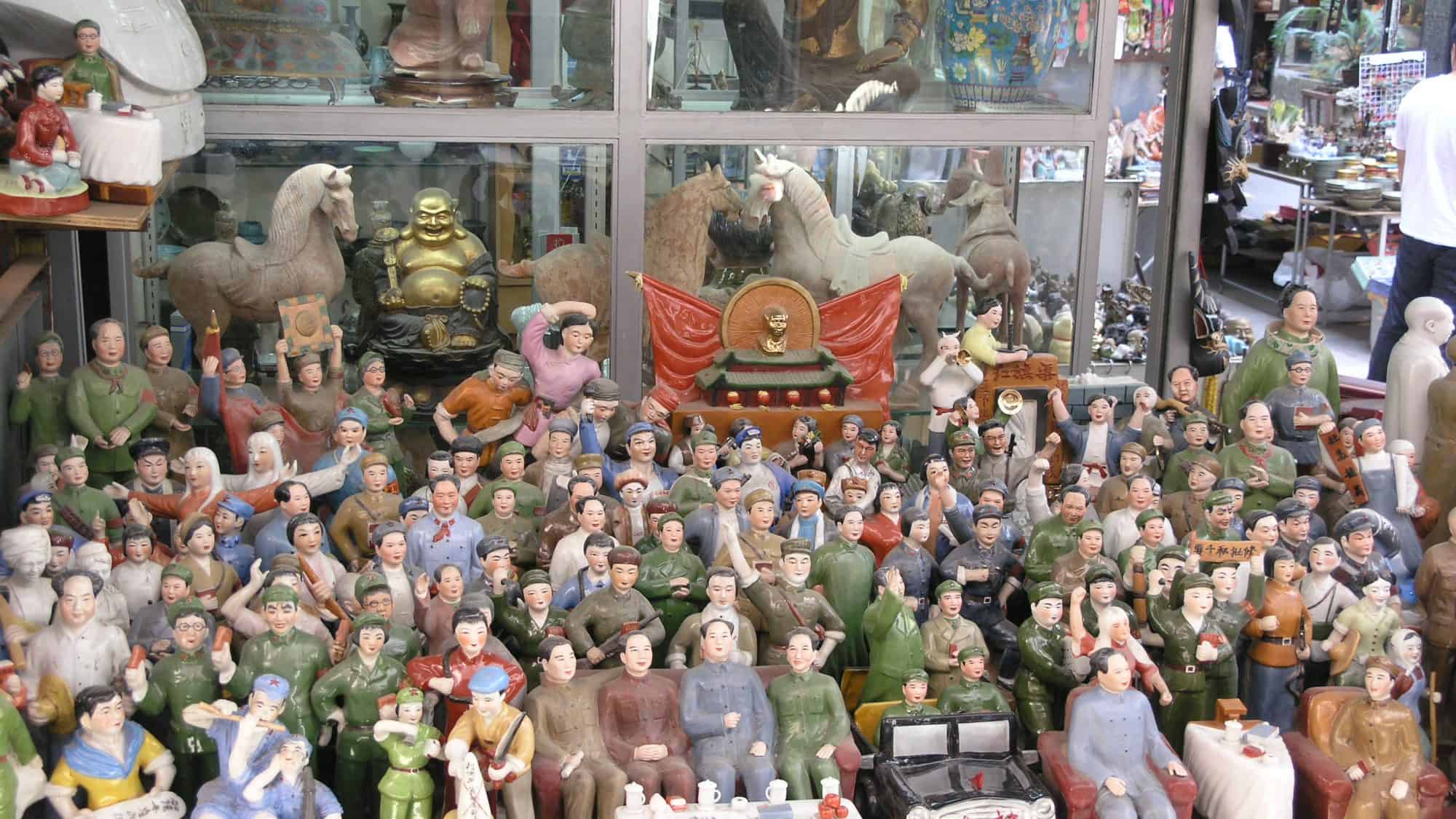 After breakfast we headed north along Nathan Street to the closest Metro station, Yau Ma Tei, which was further away than we’d expected. Once we’d worked out how to pay for a ticket, we were on our way under Victoria Harbour to Central station on Hong Kong Island. Today we planned to explore the Western District of Hong Kong, an area of family owned businesses and shops, and next to no tourists.

One of the great things about this part of Hong Kong are the different neighborhoods dedicated to different things – one for ginseng, another for herbs, and others for preserved fish, dried animals, coffins, carved seals and so on and so on.

We started in the Shanghai clothing department store, a very chic shop, with its interior built as a reproduction of what a department store might have looked like in the 30’s, with gleaming wooden and tiled floors, raised cashier cubicles, ceiling fans, and clerks wearing uniform. It was also very expensive. We continued along a couple of pedestrian streets, lined with markets selling much of the same as Stanley market.

One of the most peculiar things in Hong Kong are the escalators. The Central/Mid-level escalator stretches almost 800m with a series of escalators and moving walkways, with 29 entrances and exits. The escalators operate downhill from 6:00 to 10:00 and then reverse their direction from 10:30 to midnight. If going in the opposite direction you need to take the stairs next to the escalator.

On Man Wa Lane you find one of China’s oldest trades, booth after booth making “chops” or carved seals, followed by a street with shops selling snakes and another selling song birds. We visited the Western Market on Des Voeux Street, renovated in 1988 into an up-market bazaar selling all kinds of touristy things. We passed streets selling ginseng, preserved foods, herbal medicine, as well funeral and incense shops.

We rested in Hollywood Park whilst Yanmei and Daji played in the playground and a small boy attached himself to them – following them around. We passed the street where the British first landed in 1841 and placed the Union Jack to claim the island for Britain – at that time the street was on the seafront, now the seafront is some way away. We passed a street barber, along Cat street with its antique shops before arriving at Hong Kong Island’s oldest temple, Man Mo Temple – the only low building surrounded by skyscrapers.

Via the escalator we returned to Des Voeux Road and the trams. We waited for a tram to Causeway Bay, more for the fun of riding the tram than anything else, but were surprised by how thin they are. We waited for a tram where we could sit upstairs at the front so we could enjoy the view as we cruised along the busy Hong Kong streets. Given the name we assumed Causeway Bay was near the water. However it turned out to be yet another shopping area, and after Steven had shopped for CD’s and Lene and the children taken an ice cream in Ikea (just for the sake of seeing how similar a Hong Kong Ikea is to a Danish Ikea!) we took a tram back to Hong Kong park – where we’d been the day before.

Again Yanmei and Daji played in the park, together with the other children, who were mostly with their nannies. As it began to get dark we took a final trip around the park. As it was such lovely weather we decided to eat at the restaurant in the park – the last time in 2007 that we would be able to sit outside and enjoy the evening.

We took the ferry back across the harbour and arrived just as the light and laser show started. From the waterfront we had a great view across to the show which lights up many of the high-rise buildings along the waterfront of Hong Kong Island. We made our way back along Nathan Road towards the hotel. We finally found a supermarket and bought a bottle of wine and a baker to buy cakes to celebrate our last night in Hong Kong, and the last night of our 2007 trip to China.