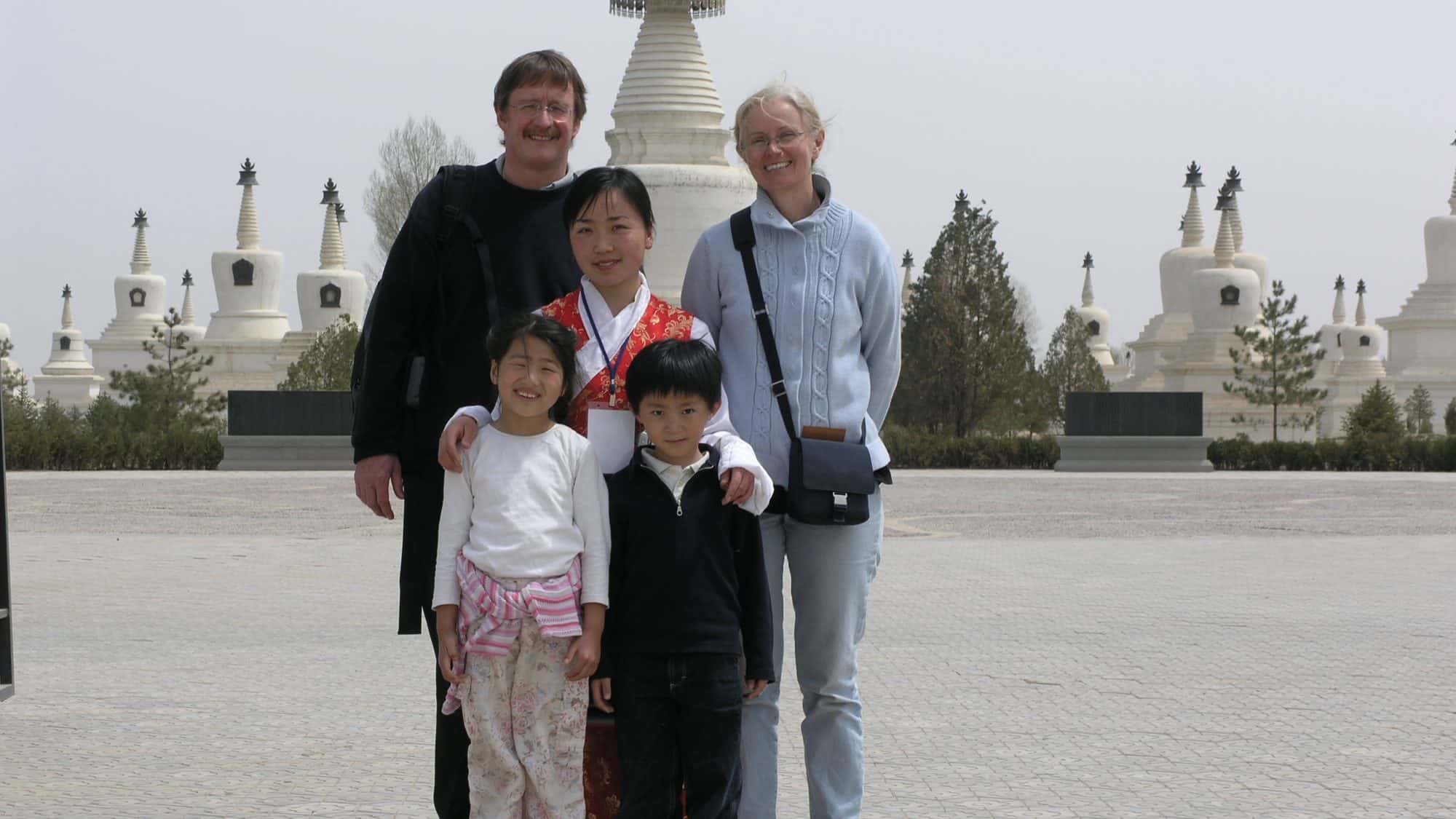 Today was supposedly the day of the sandstorm! We woke up to brilliant sunshine, and the beautiful weather lasted the whole day. We breakfasted with the driver although we couldn’t communicate we managed to learn the words for egg, rice, coffee and tea – which we of course have again forgotten. Breakfast was more varied than in Jinchang, Yanmei taking her morning portion of noodles and Daji the porridge. 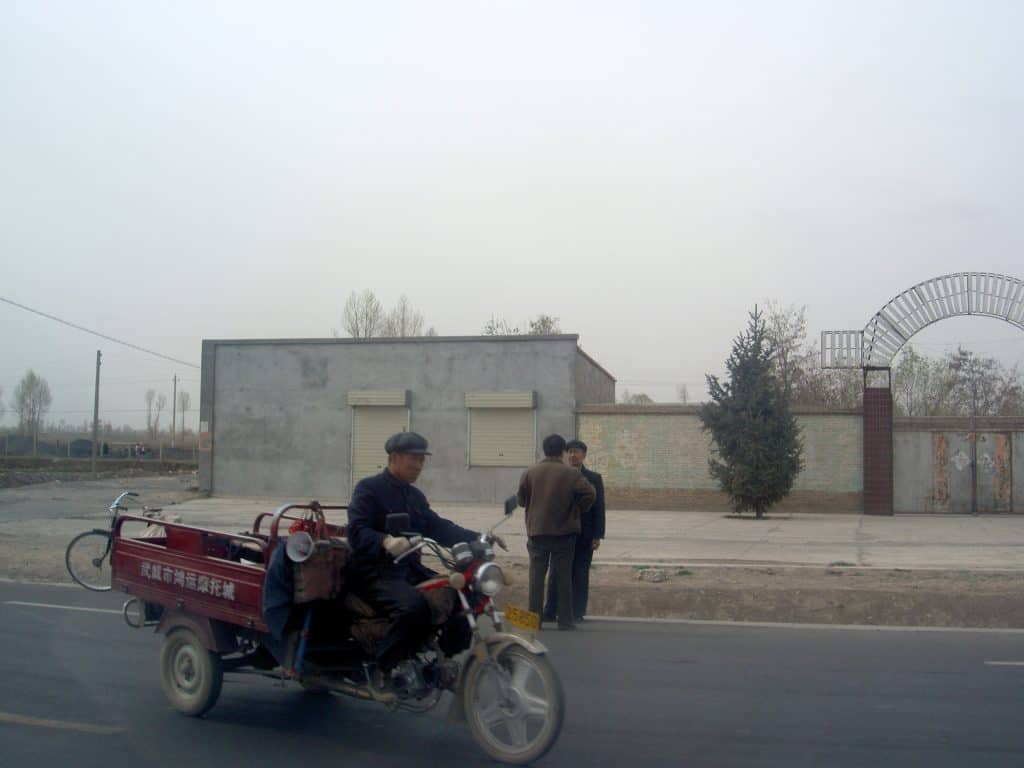 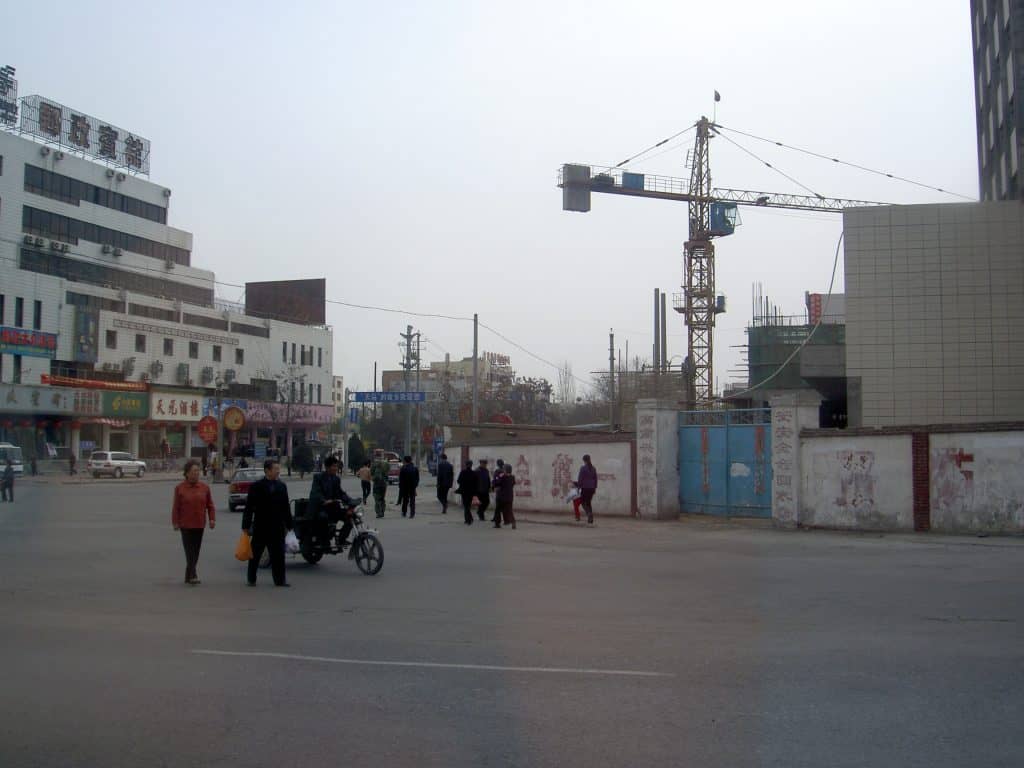 We had asked Megan if they knew where the Wuwei SWI was and whether we could drive past it, just to have a look. As the guide knew where the SWI was, we pressed them to drive by. At first they refused and only after pressure they agreed – as long as we didn’t leave the bus. It turned out they didn’t know where the SWI was, and we drove from one end of the town to the other, before finally finding it – ca. 1km from our hotel, just across the river. 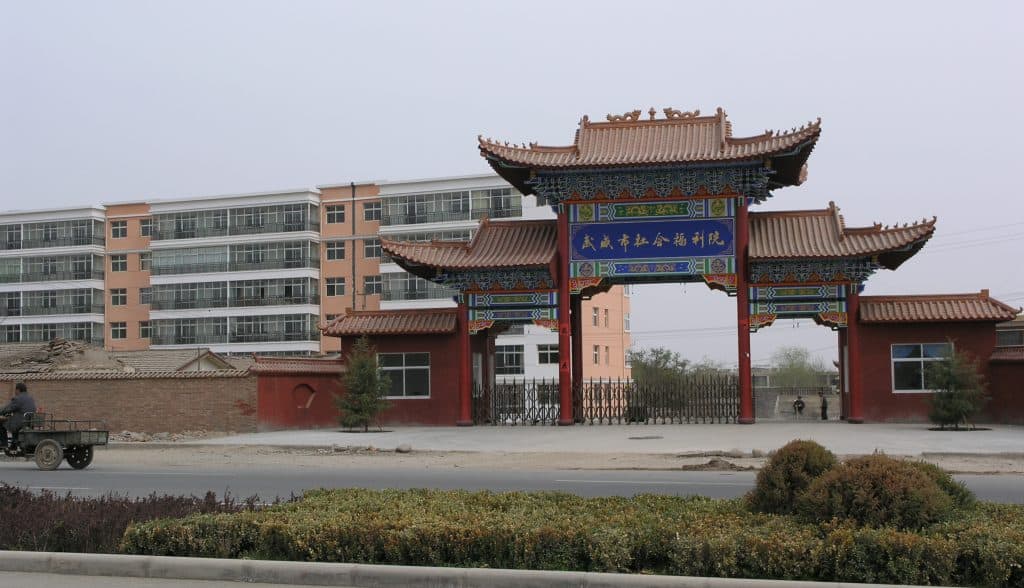 The SWI looked larger and certainly older than the Jinchang SWI, which Megan confirmed. The guides also told us that it wasn’t open for visits, but they expected it to open in the future. 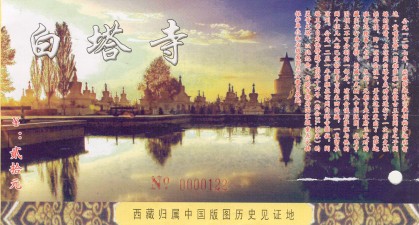 We started the trip back to Lanzhou. The guides invited us to Baita Monastery, also called the Hundred Dagoba monastery, which is situated about 20 miles outside Wuwei. As the name suggests, there are 100 white pagoda’s have been built on the site of a seven-story white pagoda which housed the bones of Sapan, a Tibetan munk who travelled for two years to Wuwei and was instrumental in the signing of a peace treaty, the “Liangzhou Covenant”. The treaty, which was signed in 1247 between Han, Tibet and Mongolia, led to their unification and ended 400 years of war. The Pagoda was destroyed in the Gansu earthquake in 1927.

The new site was opened in 2004. At points 30 meters away from the four corners of the foundations of the largest pagoda, four Sagya masters’ Buddha towers were built at a height of 19 meters. Other smaller towers surround it at heights of 5, 7, 9 and 11 meters. There are five 5-meter high towers, and thirty 7-meter, 9-meter and 11-meter high towers. The picture below consists of ca. 50 of the towers – it is a quiet impressive sight. There is also a museum that depicts the story of Sapan, his travels and the work he did in and around Wuwei. 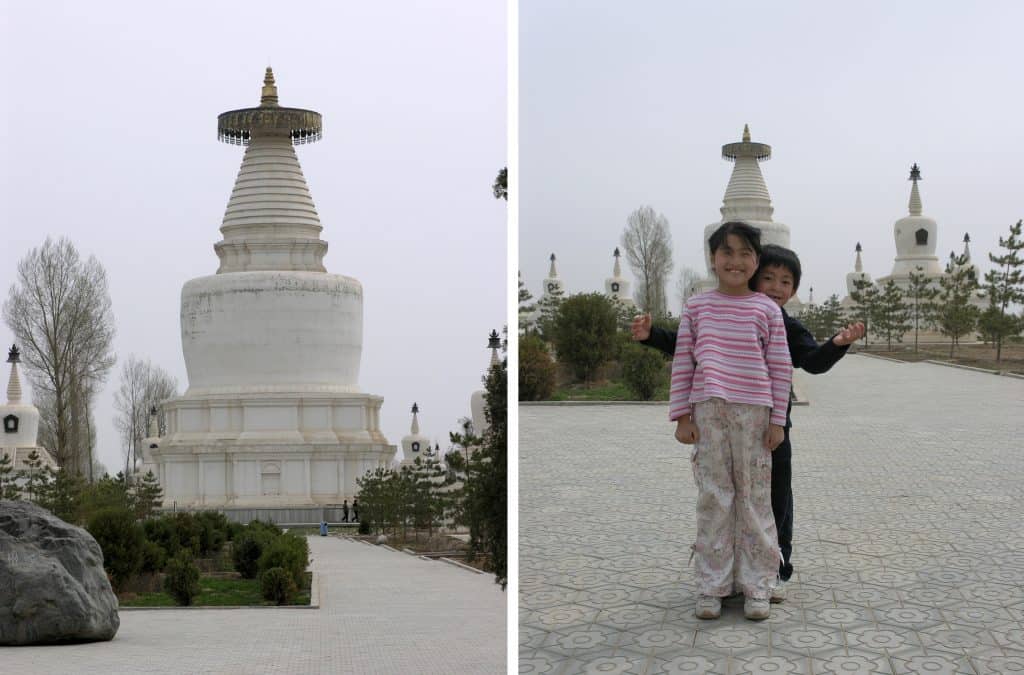 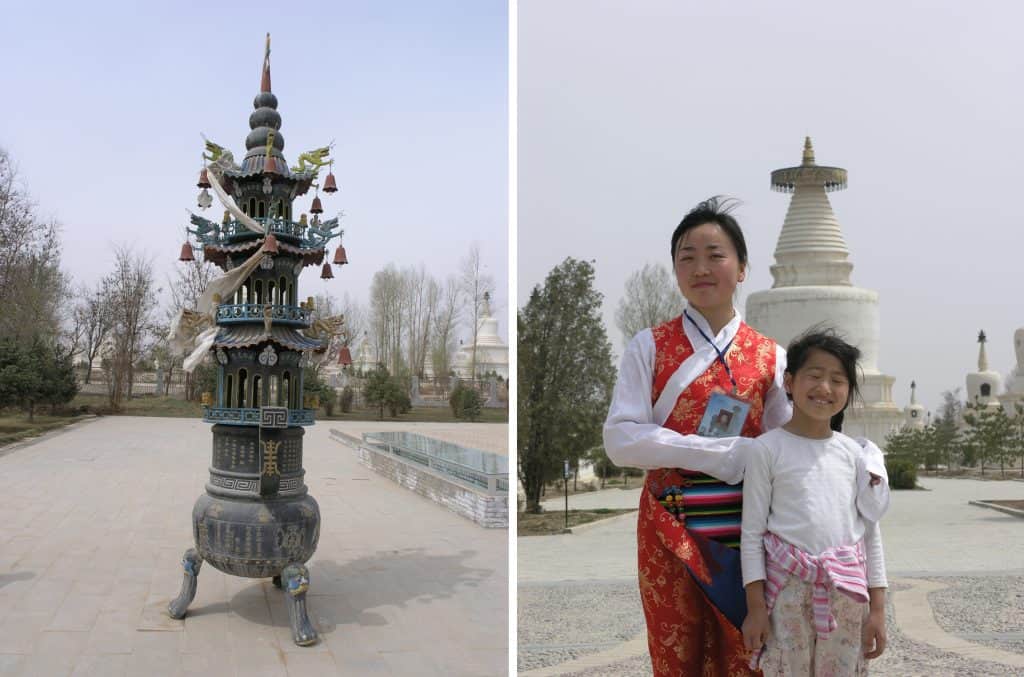 We enjoyed walking around the “forest of white pagoda’s” in the pleasant weather, with plenty of open space for Yanmei and Daji to run around. We were more or less the only visitors and our guide had another guide in Tibetan national costume, to show us around. The driver showed Daji and Yanmei what to say when paying homage to Buddha at the site of the original Pagoda (to us it sounded like “a metro four” – and both Yanmei and Daji still remember it!). 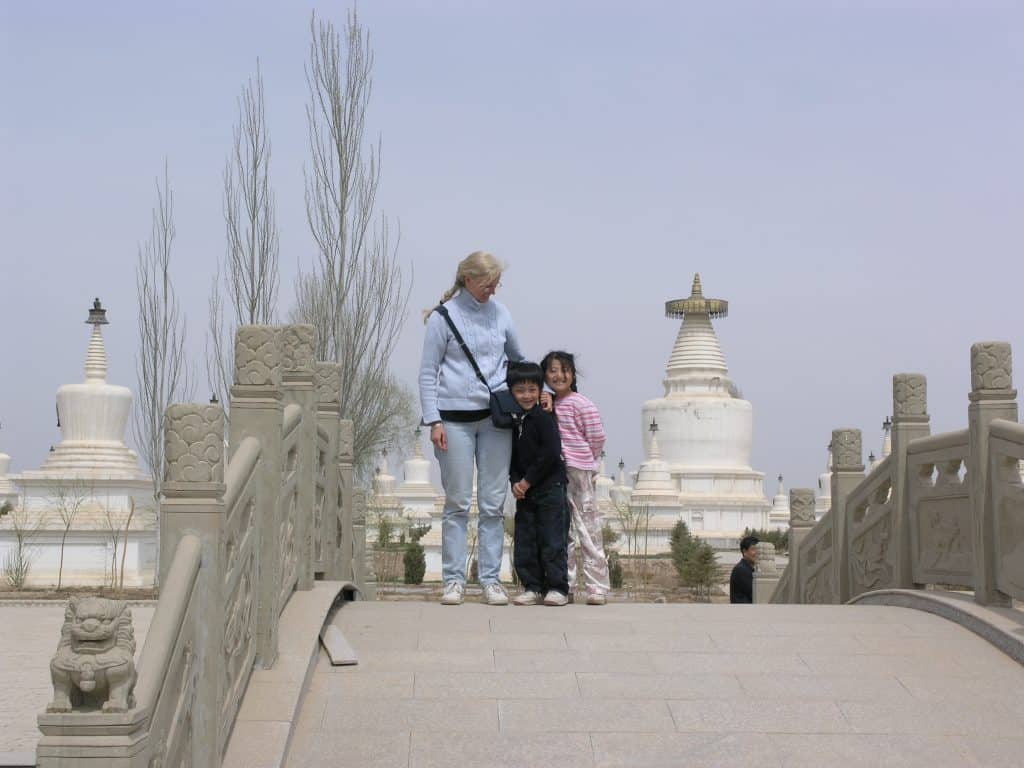 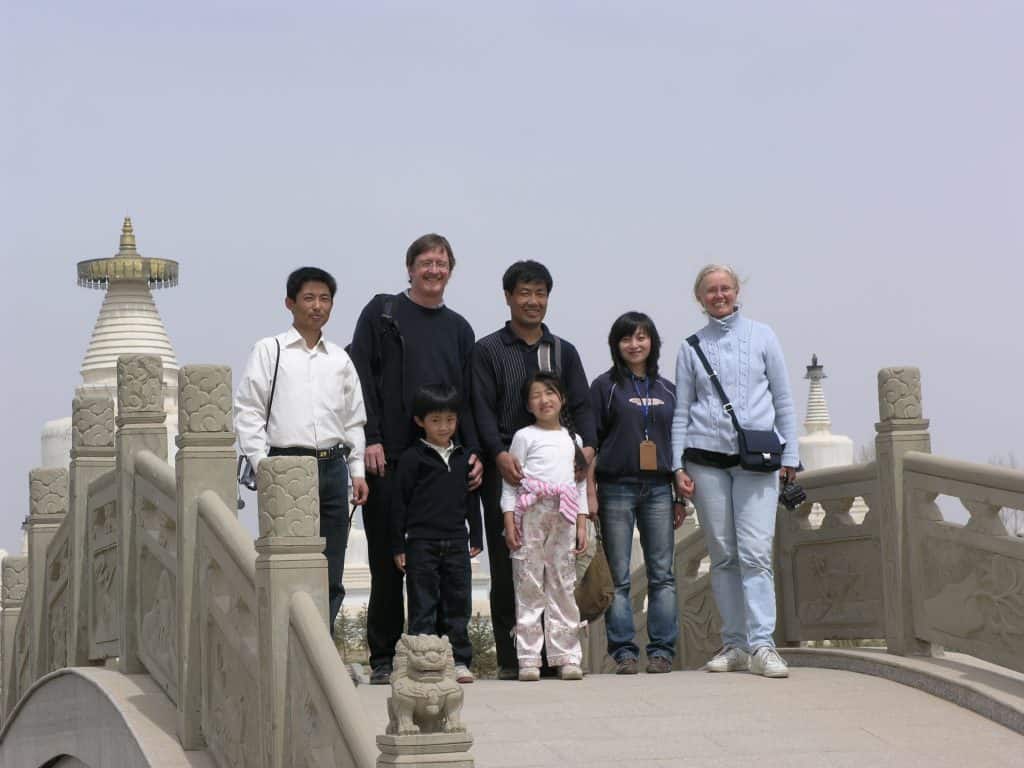 It was getting on for midday by now and we were beginning to think about getting to the airport – with a lengthy drive in front of us. But the guides and driver seemed to have plenty of time, taking the back roads instead of the the highway. The road was in pretty bad condition with bumps and holes every few hundred meters. We were worried whether Daji’s travel sickness pill would be wearing off and knowing what the consequences would be if it did, requested that they went back onto the highway – as you have to pay on the highway we wondered whether it was only in order to save a few Chinese Yuan that we were taking the small roads. 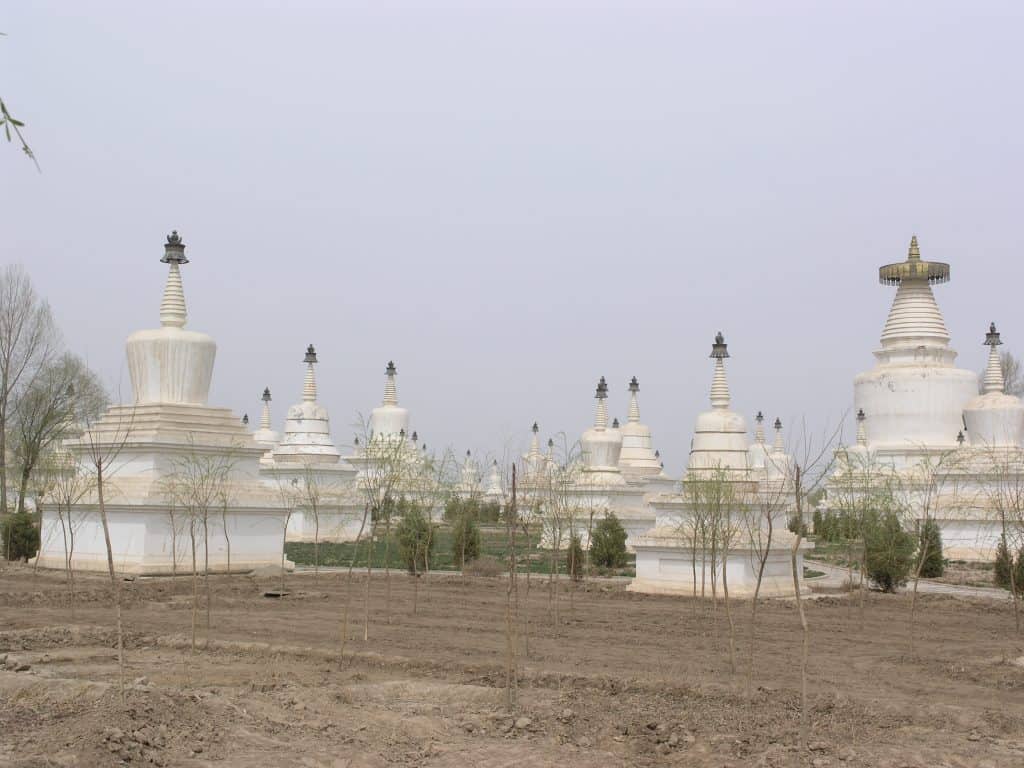 We drove an hour or so from the monastery and pulled in at a restaurant in a small town. We parked behind the restaurant and were surprised by the sight of seven or eight snooker/pool tables in the yard and the number of men playing. We were taken upstairs to a private dining room but then moved to another due to the smell. Food was ordered and then Megan’s boss disappeared for 30 minutes. Again the food was excellent, including a full fish in a soup, where we first eat the fish followed by the soup. 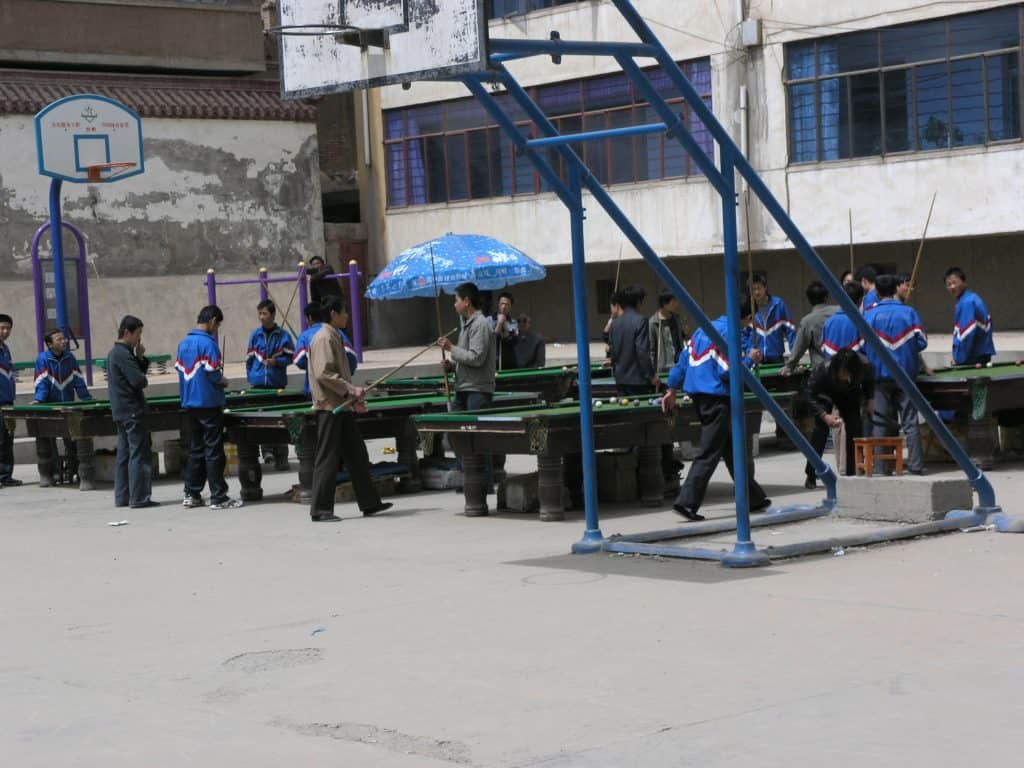 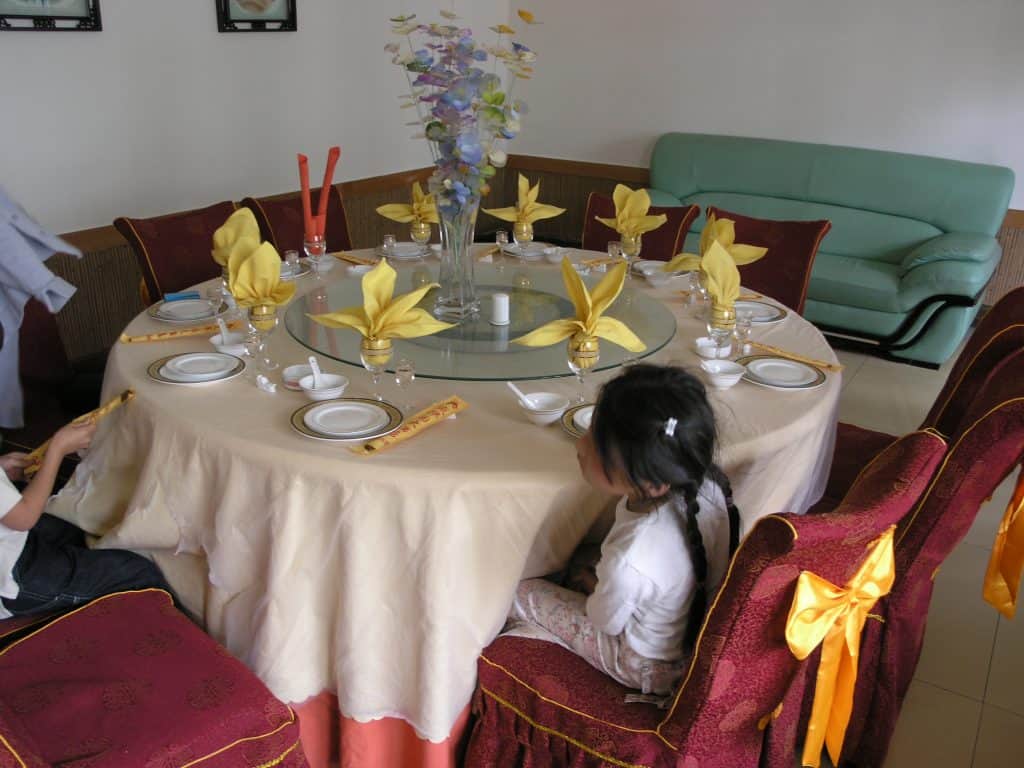 As most Chinese, the driver slurped his food. At one point Daji said something in Danish about the driver’s eating habits. Megan seemed to understand and told the driver that he shouldn’t slurp his food. The driver was embarrassed and apologised! We told him it was OK, different cultures have different norms with regards to eating. Again the food was excellent and no more than 100 RMB. 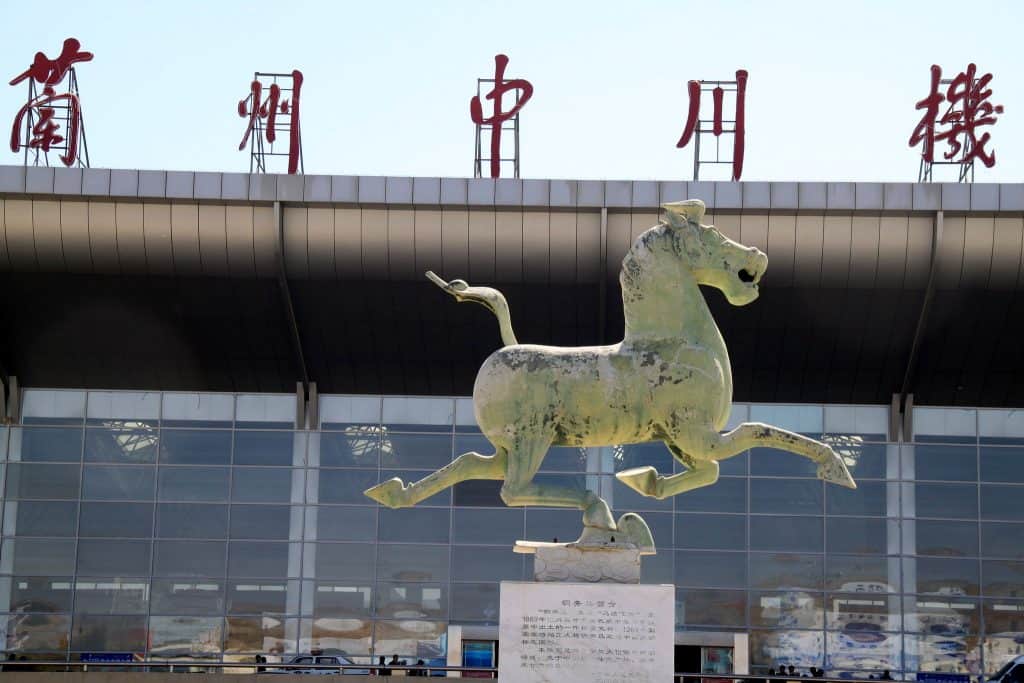 We arrived at the airport at 5pm, exactly 1hour before the flight was due to depart. Many people we out in the fields and the villages passed by one after the other with their Chinese signs painted on the walls. We were a bit worried about coming too late to check-in, but the driver had it all under control. We said goodbye to the driver – Megan and her manager needed us to hand back the tickets once we’d gone past check-in, so we said goodbye and presented Megan with the 2nd copy of Hans Christian Andersen’s works – we’d given the first copy to the the SWI and a tip to be split between the three of them. 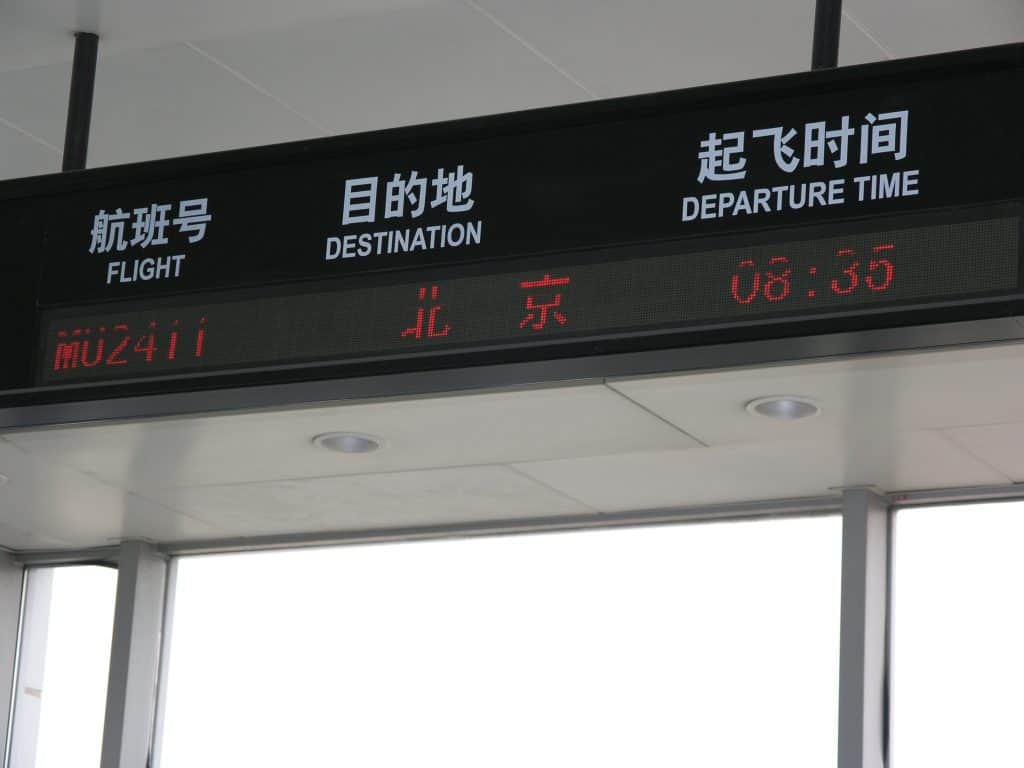 We checked in at the new airport – the airport was totally transformed since we left Lanzhou in 2000 and is now just like any other airport in the world – a glass and steel construction, seating areas and overpriced shops. The flight was 3/4 full and there were a number of foreigners on the flight, about 20, some business men and some tourists/backpackers.

We arrived at Beijing Airport which, as expected, was packed with people travelling to Beijing for the weekend or coming home after business. We waited some time for the luggage, passed the drivers trying to get you to take their taxi and into the taxi line for people with luggage. It was still a smallish car that we crammed ourselves and our luggage into. I’m sure most Beijing taxi drivers would challenge any Formula One driver on a race track, but there are no Formula 1 drivers that would stand a chance maneuvering around Beijing at the speed the Beijing taxi drivers do. We checked into a room on the 6th floor and unpacked a few things before sleeping.