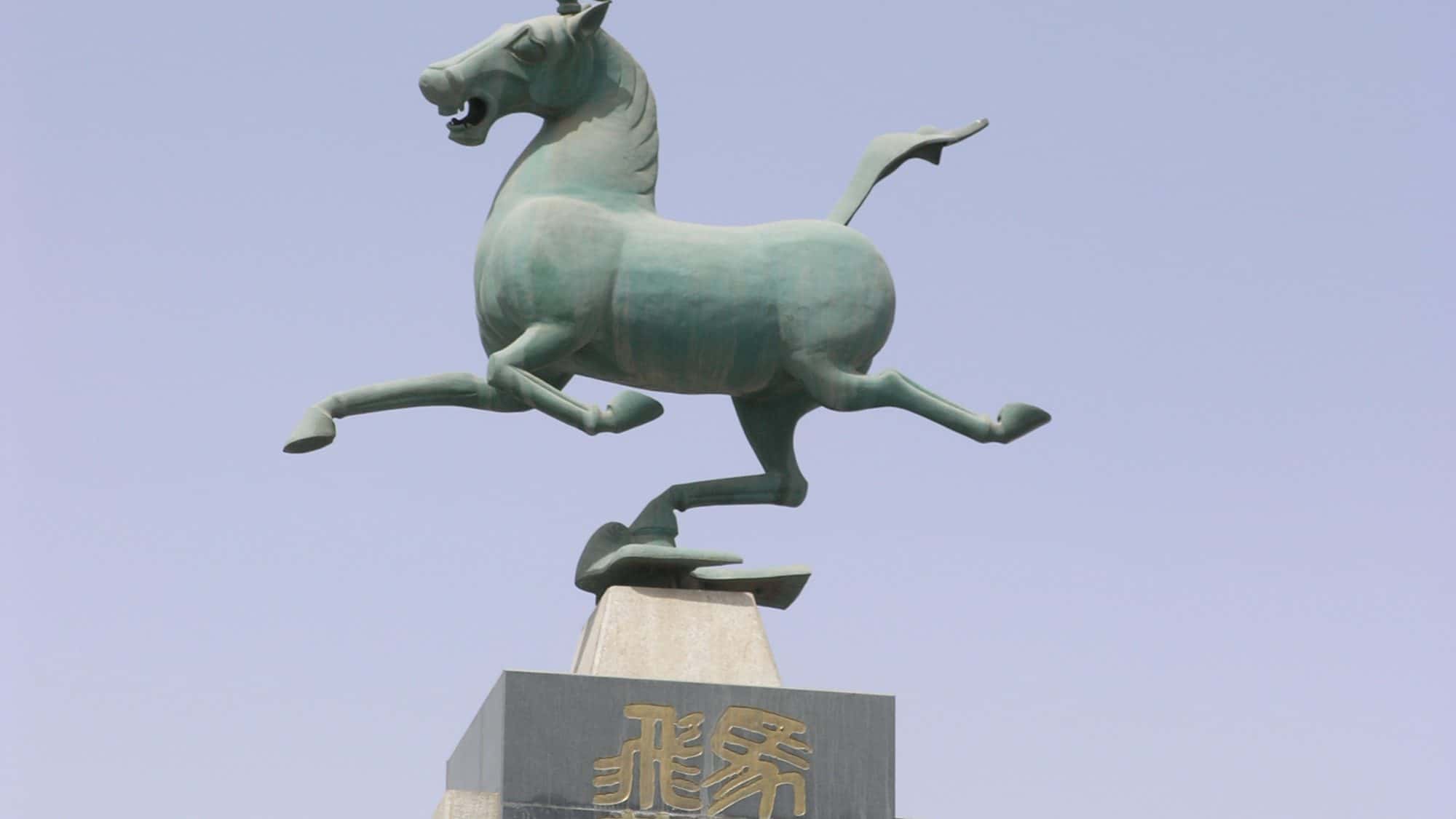 We woke, packed and ate breakfast ready for a 8:30 am departure. We said goodbye to the Canadian families we had met at the hotel and promised to take pictures of Wuwei if we stopped – little did we know that we would end up spending almost 24 hours there, which was certainly not part of the plan. The good news was that the new adopted children were settling in well, but the not so good news was that one of the members of the group had lost their passport and some money.

We were met in lobby by Megan our guide, her boss and the driver. We were very surprised to learn that both the boss and the guide would be going to Jinchang – this wasn’t what we had arranged (in fact Megan wasn’t the guide we’d been promised, instead our guide from 2000 was looking after the Canadian families). We left Lanzhou along the Yellow River, seeing many of the sights we’d visited on Sunday before turning onto the highway in the direction of the airport. The first part of the trip was on a new highway built in conjunction with the new airport. We turned off the road about 20km short of the airport, travelling NW towards Wuwei. 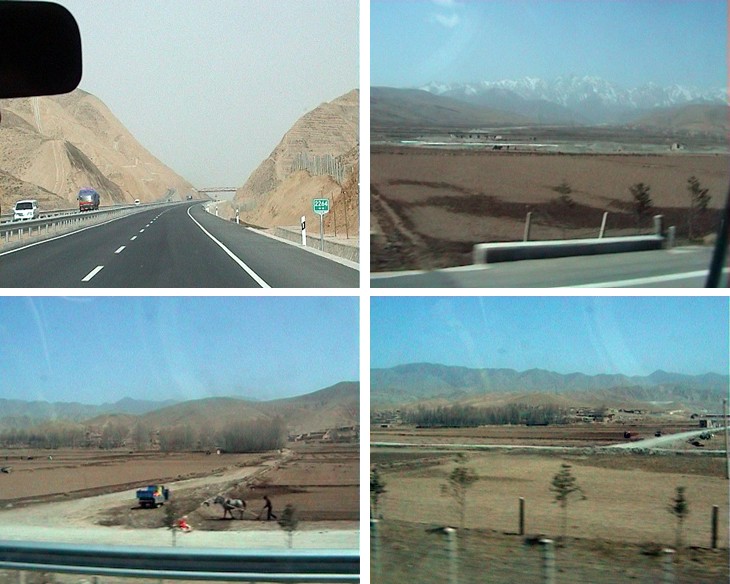 The pictures are captured from a video camera from the bus – therefore their quality isn’t the very best, but they give an impression of the road to Wuwei and on to Jinchang. We passed the first range of mountains that surround Lanzhou and after that the road was fairly flat and the land was mainly agricultural. It was clear this was a poor area, both from the housing but also from the fact that there were very few tools to help the farmers – ploughs pulled by horses or donkeys or people ploughing the soil manually were normal sights. In the distance we could see the next range of mountains that were still snow clapped. The towns were far and few between, consisting solely of a few houses.

It took almost 5 hours, with a single toilet stop, to reach Wuwei, that last large town before the start the desert. 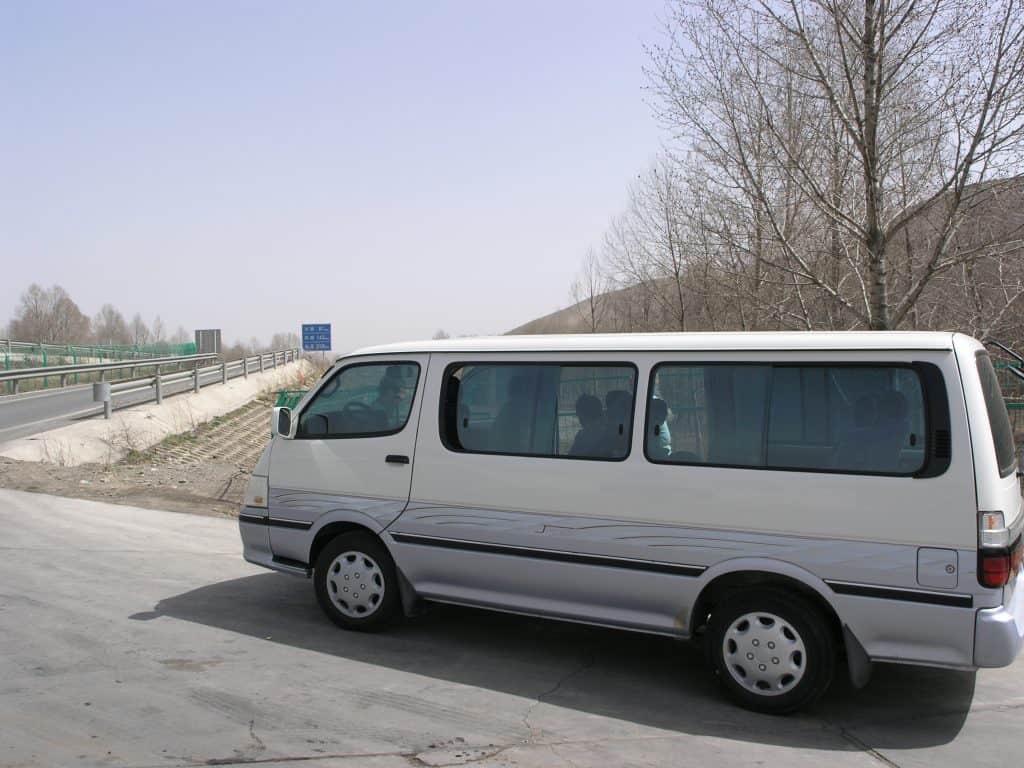 The road out of Wuwei was lined with trees, long thin tress, probably used as wind breakers. The soil seemed richer here and the villages and towns far closer to each other. However, once the trees along the road stopped the black soil turned immediately to brown stone, and we were entering the start of the Gobi desert. The drive through the desert lasted about 1,5 hours, the area becoming more and more desolate for every kilometer we drove. Everybody in the bus fell asleep, except the driver and myself – keeping an eagle on the driver to make sure he didn’t doze off. The road was long and straight. We could see trees in the distance and thought that we must be coming to Jinchang, but it was an irrigation canal lined with trees. Finally we could see Jinchang in the distance and suddenly we had arrived. 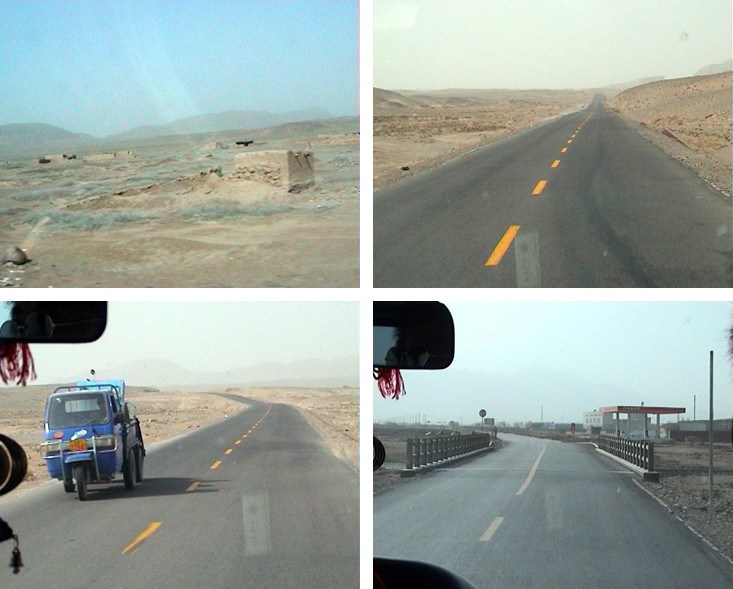 Before arriving in Jinchang, we stopped for lunch in Wuwei, at a restaurant in a hotel on the outskirts of the town. The first thing we noticed was the smell – of chemicals or food processing or similar. We eat lunch, “the boss” ordered. The food was good and evidently included donkey meat, a local speciality. We suspect it was lamb, at least it looked and tasted like lamb. The meal for 5 adults and 2 children ended up at 100RMB – again, amazingly cheap.

After lunch we visited the Leitai Han Tombs. In 1969 a farmer discovered a tomb dating back to the Han Dynasty, an inscription on the tomb indicating that the tomb was constructed in 186-219 BC for an officer from Zhangye. The Tomb is situated in Leitai Park where a a temple was built during the Ming dynasty to honour the Chinese god Leishan. The temple was built on top of an earth mound, 10 meters high – that contained the tomb. The tomb comprises of three main chambers constructed of bricks placed one behind the other – each resting on the next in the shape of an igloo. Each chamber has a smaller annex on each of its sides. The chambers were constructed in such a way, that if one brick was removed the chamber would collapse. The tomb contained some two hundred and thirty outstanding relics of gold, silver, copper and jade as well as pottery. 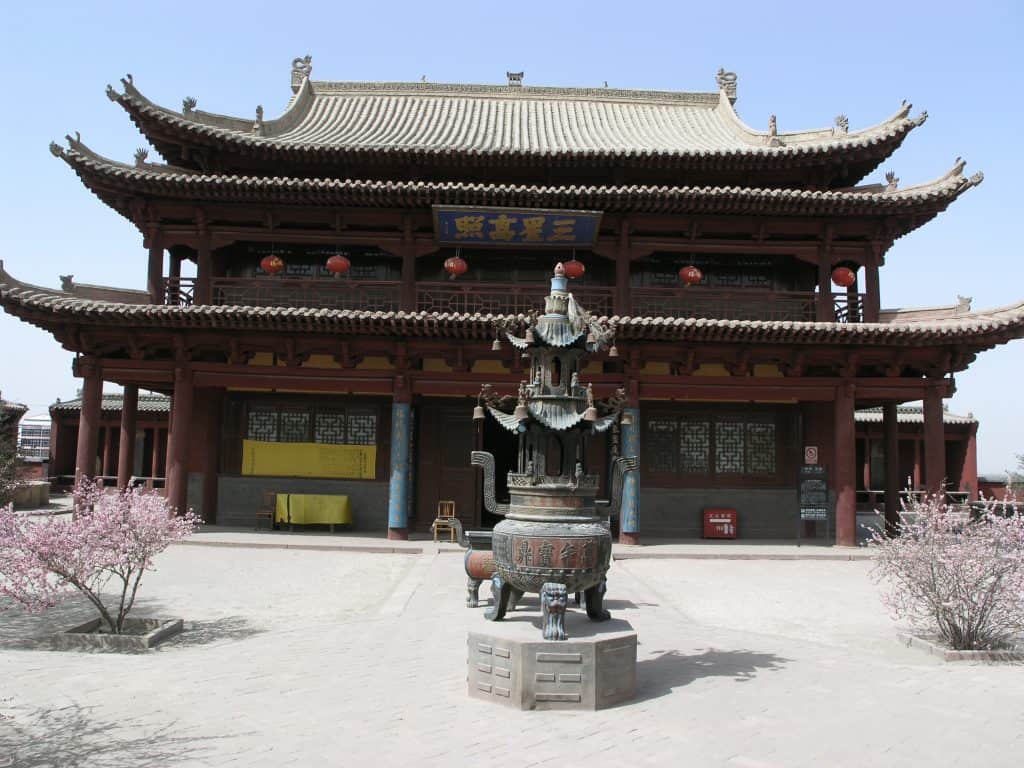 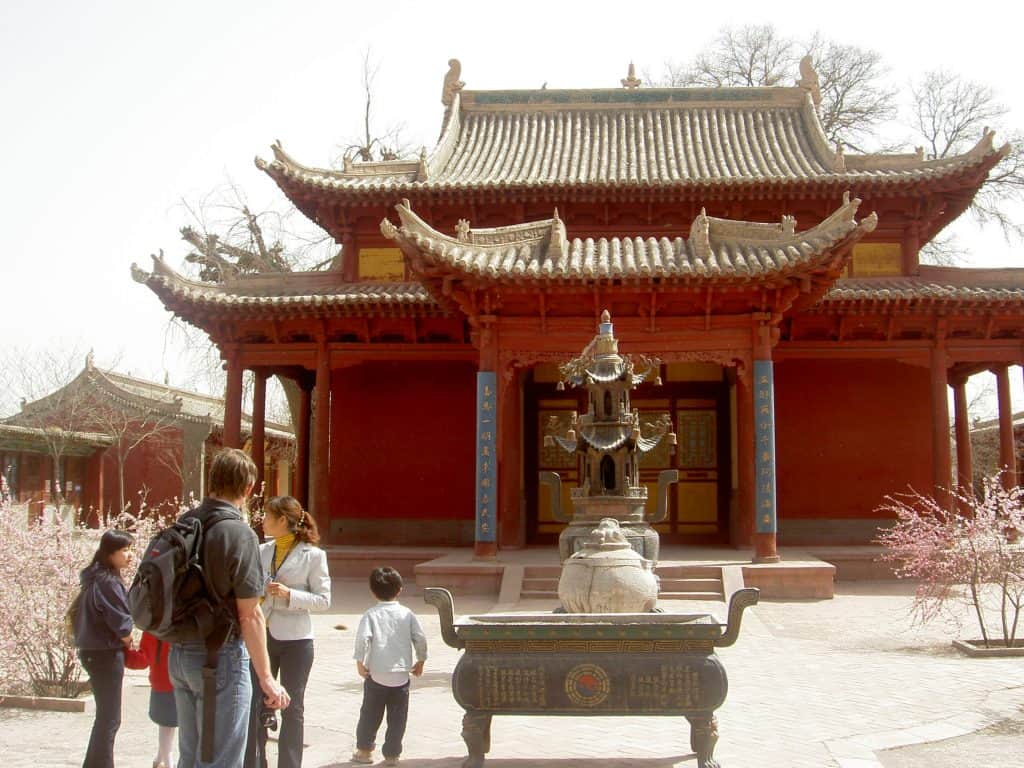 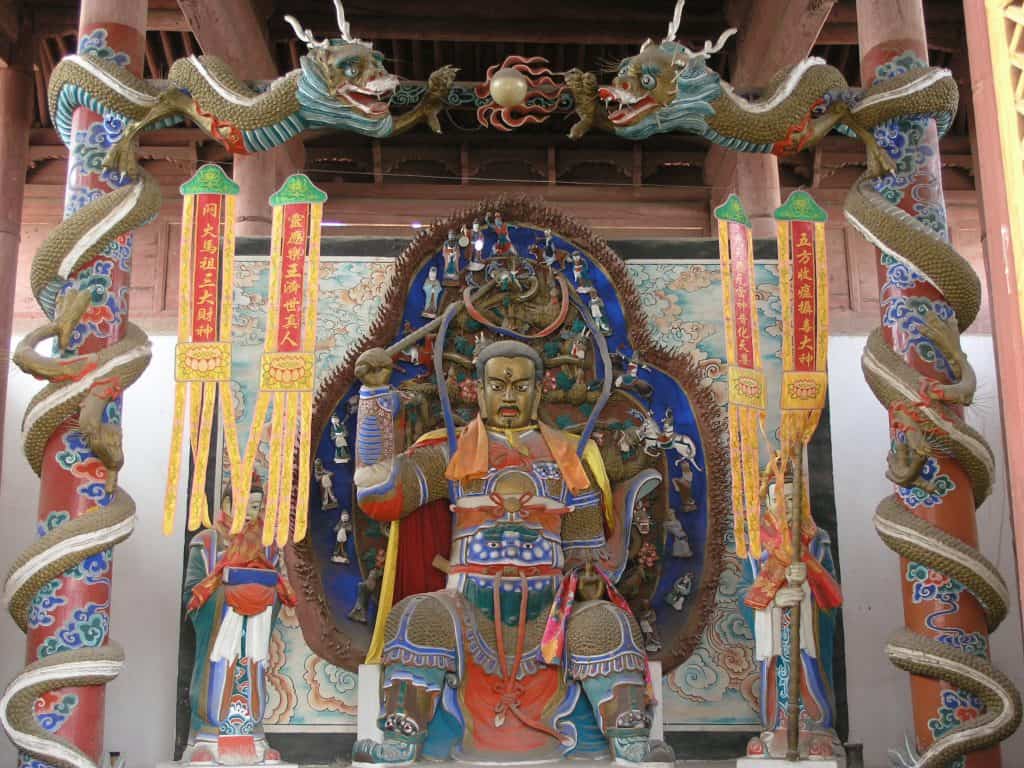 The most important find was the Bronze Galloping Horse. Known in Chinese as ‘Ma Chao Long Que’, the horse is depicted in a full gallop supported on just one foot upon the back of a swallow in flight. The statuette is roughly 35 centimetres high and 45 centimeters long, weighing 7 kilograms. The artist is unknown but it has now been adopted as a symbol for Chinese tourism and can be seen in the Gansu Provincial History Museum in Lanzhou. 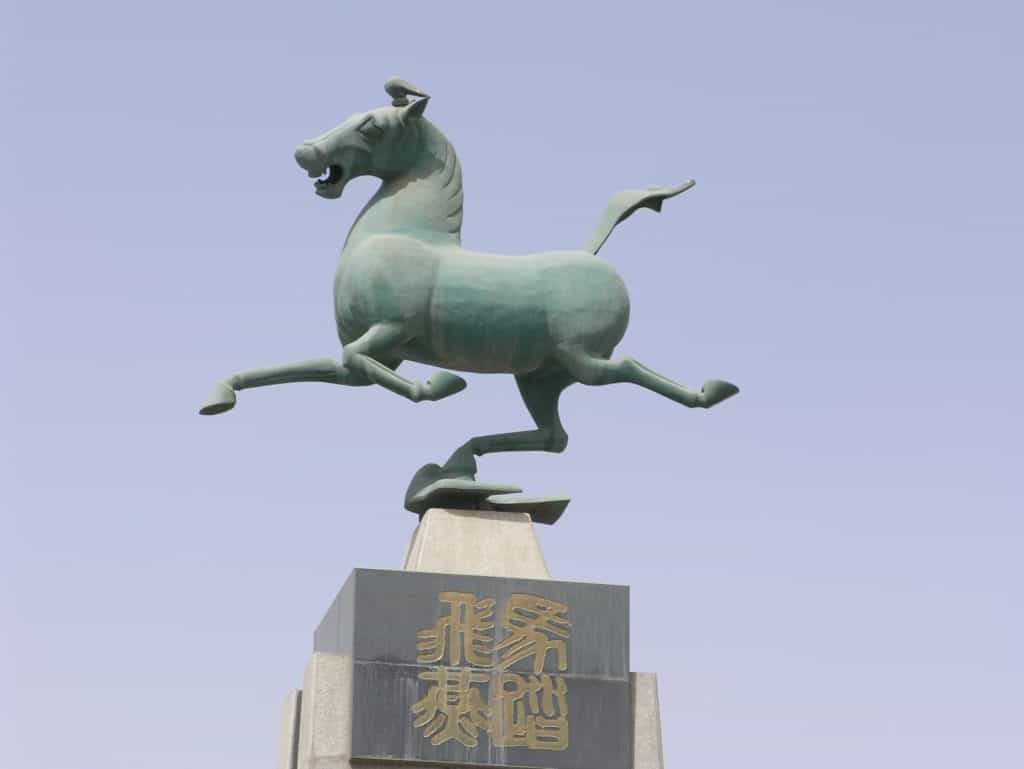 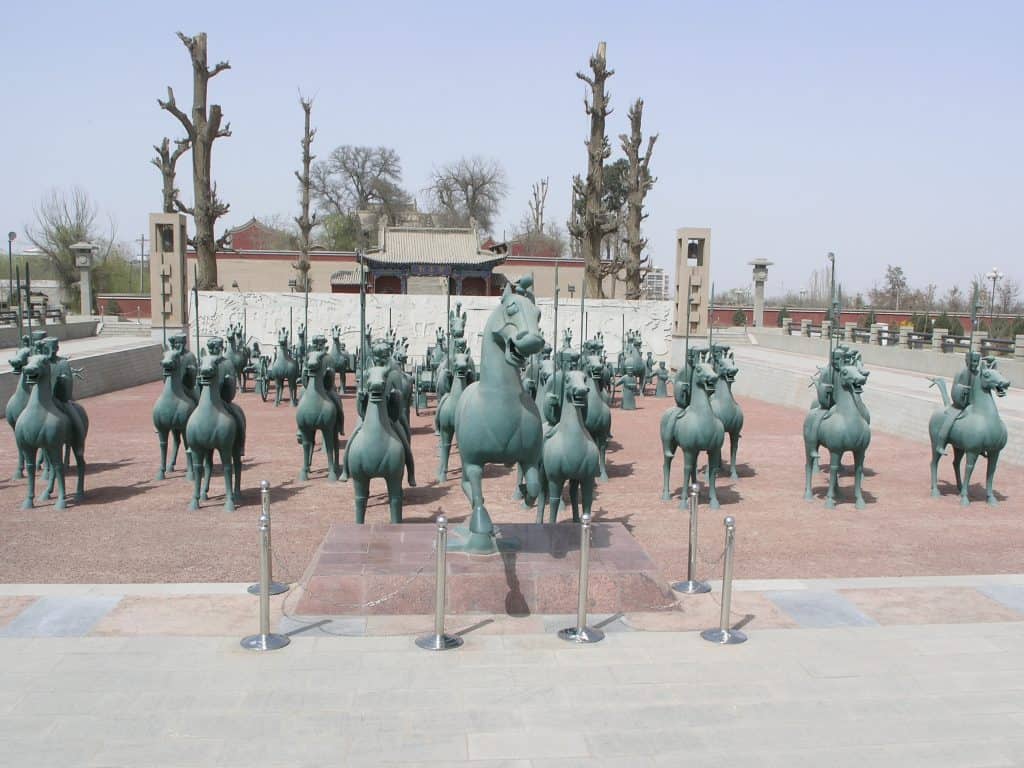 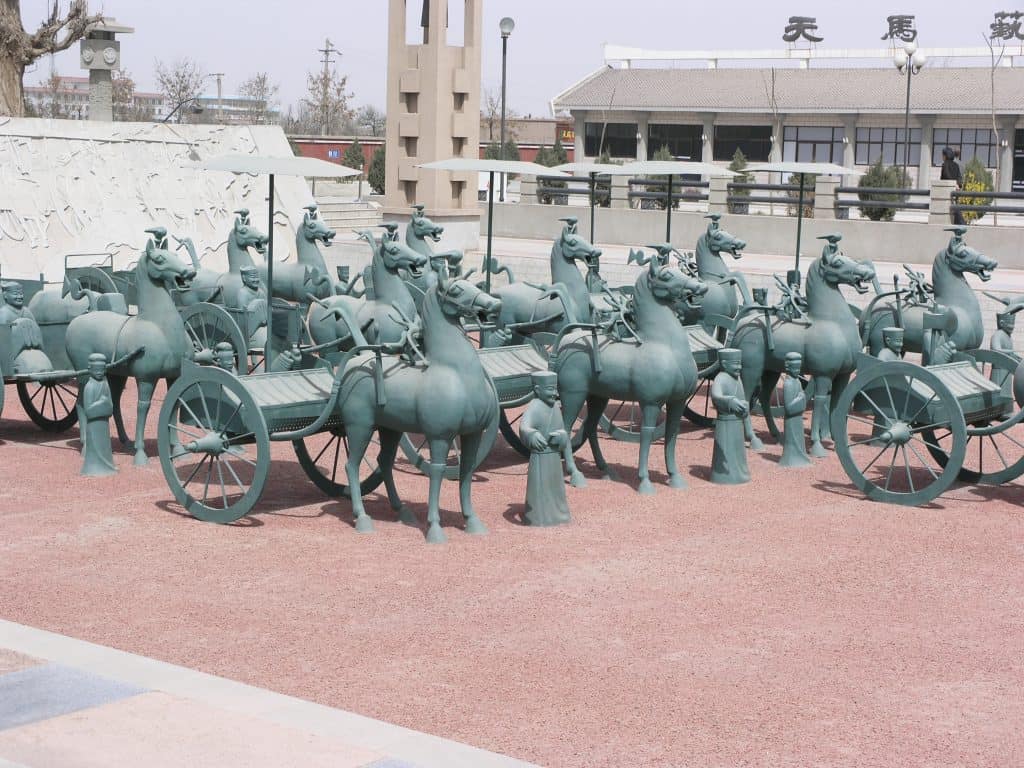 We were pleasantly surprised by the visit, expecting to visit another tomb and temple, this was something different. We actually went down into the tomb, built 2200 years ago, and still remaining in tact, despite a temple being built on top. It was a nice break from the long trip. 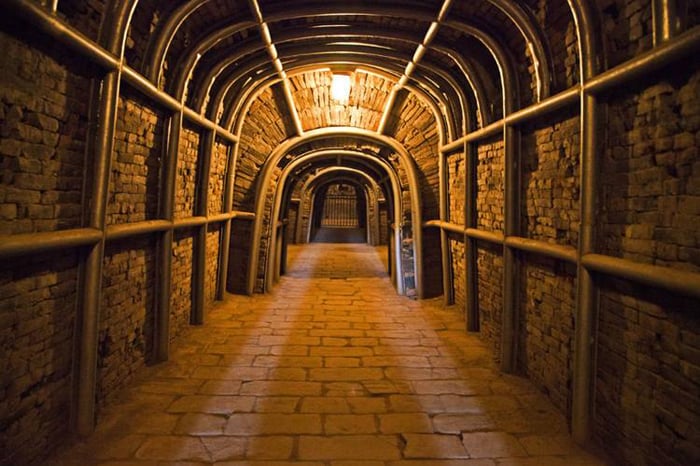 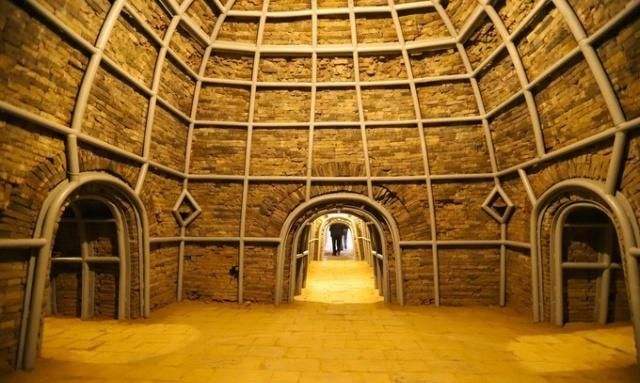 Yanmei and Daji had managed the trip extremely well, they’d both slept and we’d played cards and tried to make some interest out of the monotony of the landscape. In Jinchang we waited on the edge of town whilst the guides rang for the Director of the SWI. He arrived we introduced himself and he led us into town. Thanks to the pictures of Jinchang we had received from China Findings, we recognised a few places, not least the bus station, the walking street and wide open roads.

We pulled up at a hotel with a large garden – it looked nice, this must have been the better hotel we were told about. It turned out that the hotel was full (no reservations had been made?) and we were driven to another hotel – the Jinchang hotel. We’d paid for two rooms, but were only offered one. They wanted a deposit of 1.000 RMB in cash, they didn’t accept credit cards, but we told the guide we weren’t carrying so much money – this caused a big discussion. The room wasn’t very clean, but we wanted some time to ourselves. We unpacked and decided to go out for a walk. We walked to a square in the centre of town. The town was empty – big roads, large pavements and a couple of large supermarkets full of shop assistants, but few people or cars and the occasional child in school uniform on bicycles. 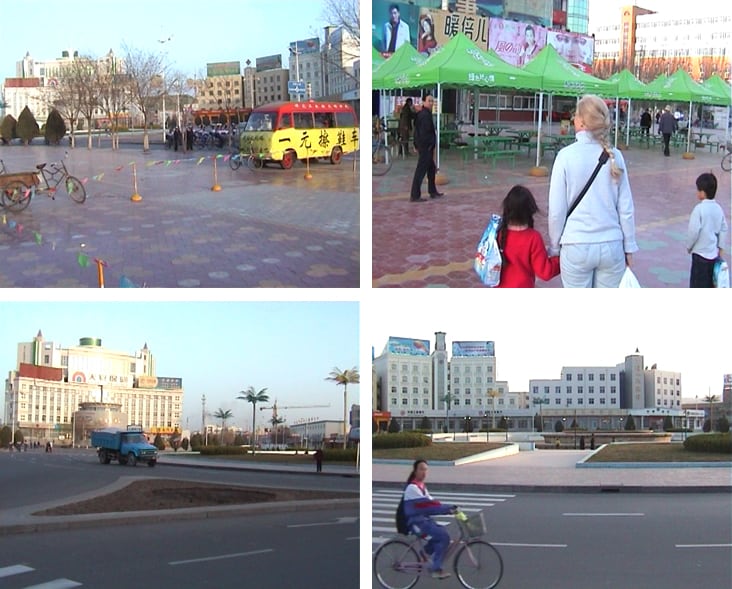 We generated a lot of interest as we purchased shoes for Yanmei and Daji and in the local supermarket where we bought local wine (and two bottles of ice wine from Gansu, which we brought home and tasted awful). We walked around and bought some fruit from another shop. There were three supermarkets selling food within 100 meters of each other. All mostly empty of people, but with plenty on the shelves. 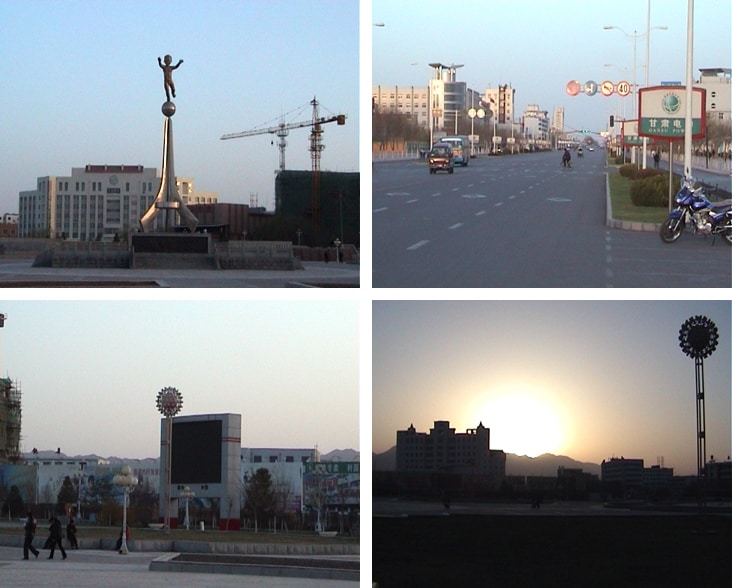 The sun was going down – the weather was beautiful, but getting colder. We started to walk back towards the hotel and noted the large square with the statue of the child reaching out to the world and the big TV screen. We went across and Daji and Yanmei saw the exercise part and ran off. Steven stopped to film the sun going down behind the mountains to the west and was surrounded by 20-30 school girls wanting to practice their English. Steven was the first westerner they had ever seen and were curious as to why we were in Jinchang, what we thought of it and and of China. Their English was good, which Steven complimented. The compliment was perhaps all they wanted, as they all left happy, shouting good-bye’s.

Back at the hotel we eat the fruit and bread, yoghurt and jam and drank the red wine, which surprisingly turned out to be excellent. We unpacked all the pictures and letters that we were to deliver the next day and made sure the video and cameras were re-charged. We all felt that we were still sitting in the bus, so we went early to bed and quickly fell asleep.