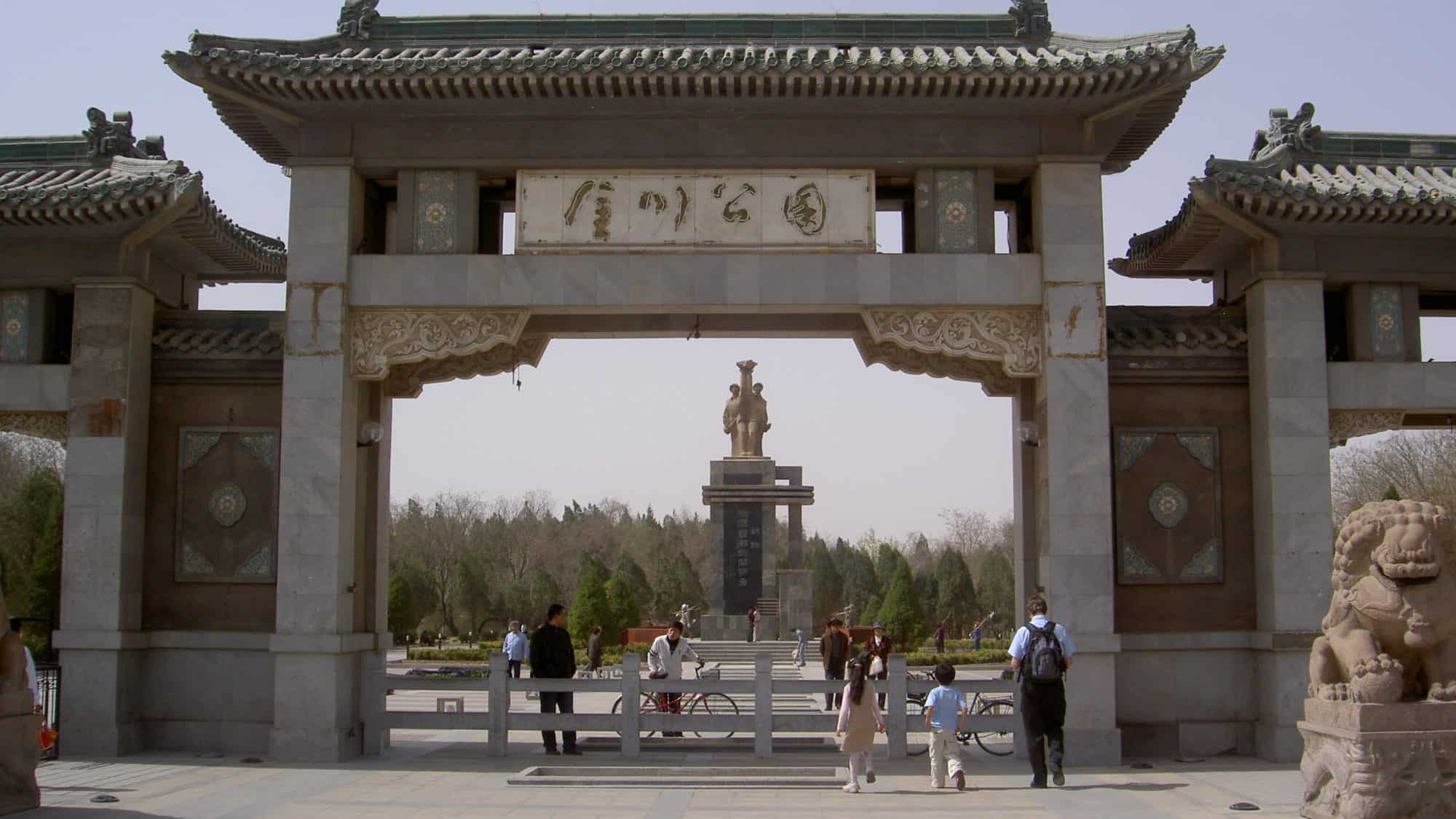 Jinchang City is in eastern sector of the Hexi Corridor, at the north foot of the Qilian Mountains and on the southern edge of the Arasan tablelands. It hardly existed 50 years ago and the sole reason for existence is the Nickel Mine. Everything looks relatively new, the town seems prosperous and well functioning and the people friendly and certainly not poor, as we would later see in Wuwei. The city has clearly been built for a far greater population than the 500.000 it currently serves. Today the weather was beautiful (26C) – and normally the summers are very hot and the winters very cold. The air was fresh, we didn’t notice the smell of Sulphur dioxide, that is supposedly all around and certainly would not believe that Jinchang was amongst the top 10 polluted cities in China, and top 100 in the world.

We left the Social Welfare Institute in the bus. We would have preferred to be alone, to collect our thoughts, but we were with our guides and needed to purchase the washing machine. It was lunch time so we invited the guides and driver for lunch.

The restaurant was packed, everybody stopped eating and stared at us as we were led through the restaurant and upstairs into a room of our own. Of all the meals we had in China, this is by far the meal I remember least. Not because it was bad in any way, all the food we had throughout the trip was excellent, but we were still digesting all the information and impressions of the previous 3 hours. Daji ordered a cola, it didn’t come with the meal, but 5-10 minutes into the meal, in a plastic bag – they’d been to the local supermarket to purchase a can of coke. Even with the coke, the bill for the seven of us was only 99 RMB. 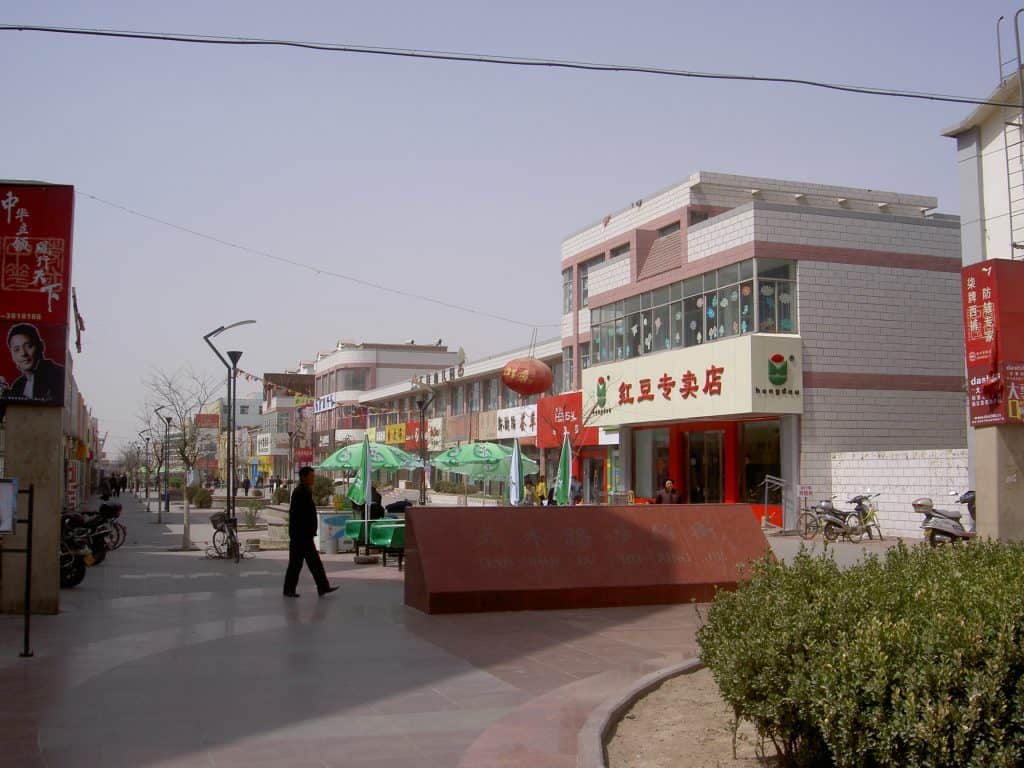 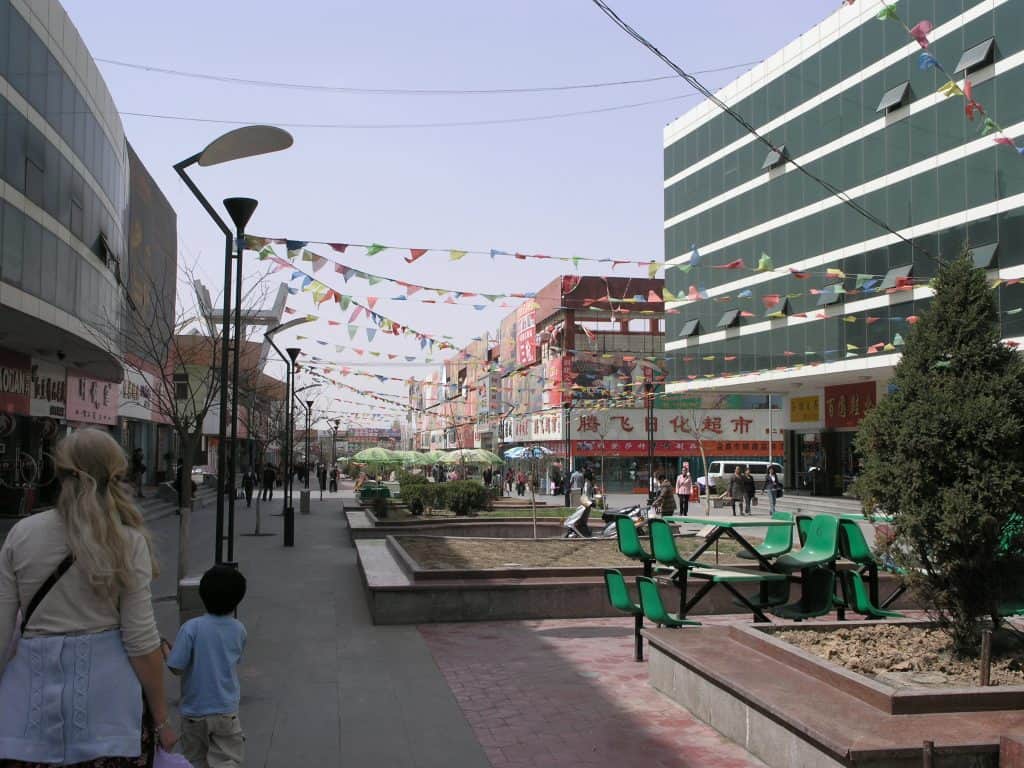 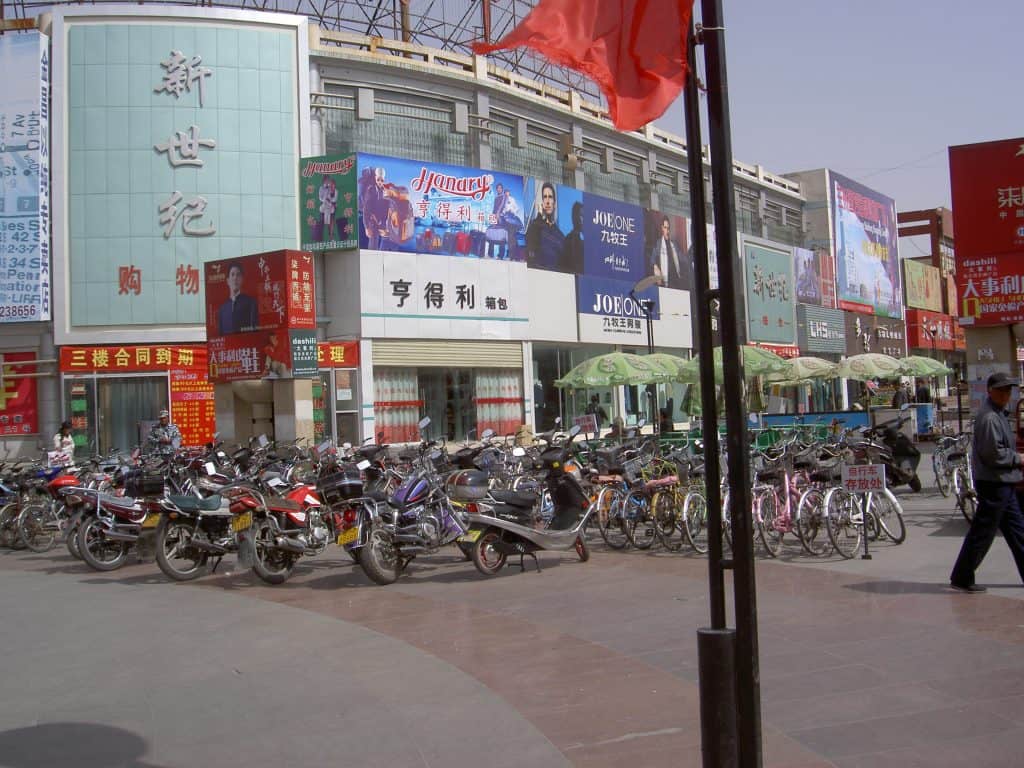 We left the restaurant and the driver parked at the northern end of the walking street. It was around 2pm but whilst this was the main shopping street in Jinchang, it was more or less empty. We walked along the street with the two guides and the driver – anybody looking at us would probably have thought that Yanmei and Daji belonged to the guides not us! 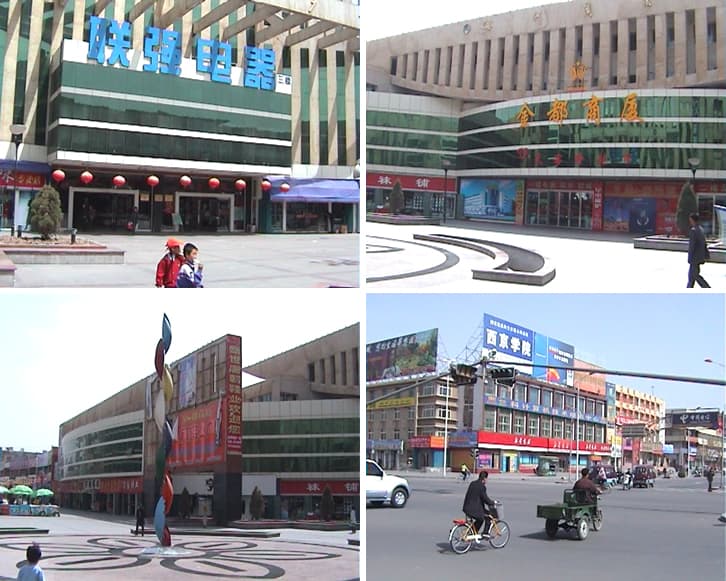 We entered a department store (with the blue sign in the picture above) up the escalator and into the hardware department. We looked at the washing machines, quickly counted out the European makes which cost the same as in Europe and finally selected a Chinese washing machine. We tried to negotiate a better price, but the salesman told us that it was already on offer – so no way, but he’d give the SWI a three year guarantee. The machine would be delivered the next day. 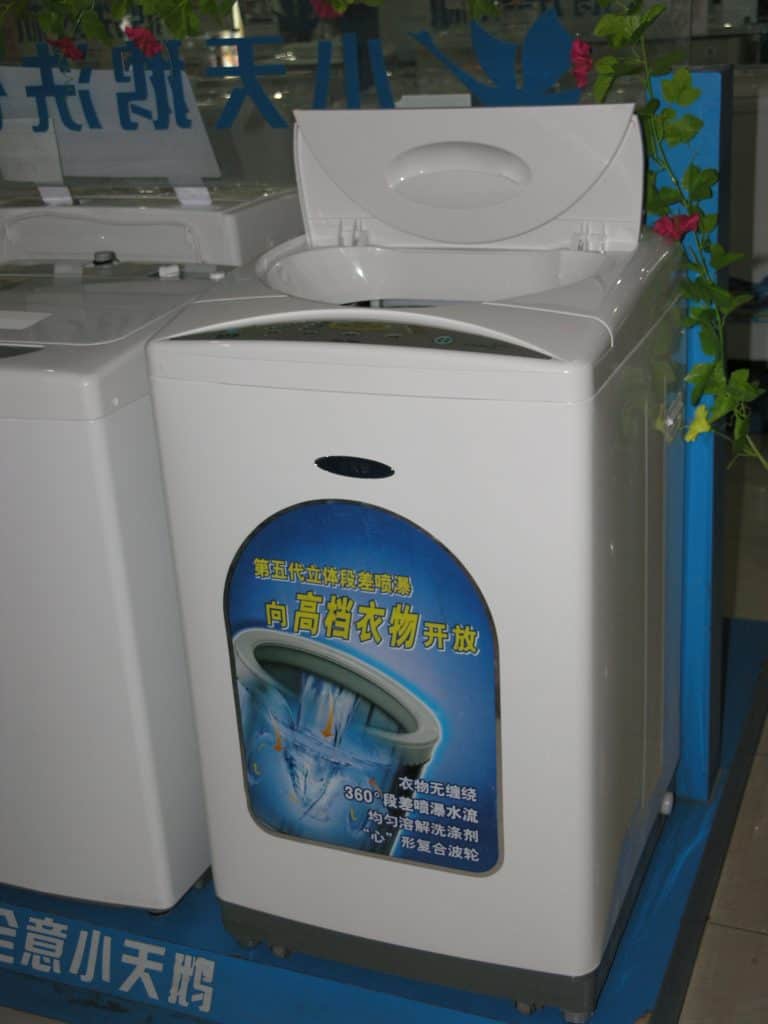 We left the guides and driver and strolled up and down the walking street. We bought shoes for Yanmei and Daji (3 pairs for 120 RMB) but saw little else of interest. The street contained the usual array of shoe and clothing shops, but seemingly very few chains. The weather was beautiful and we watched the little life there was, drift by. 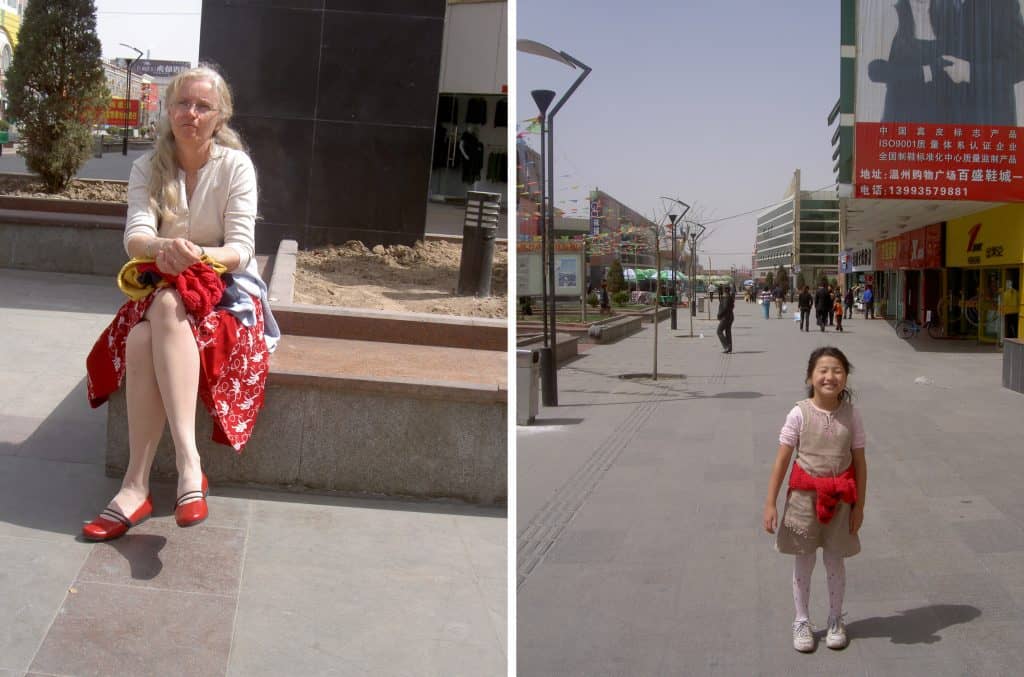 With everything else that had happened around us, we’d forgotten to take Daji to the toilet, and now he needed to go. Steven took him into a large store but he couldn’t see any signs that looked like toilets. He managed to explain to a lady who pointed through a door. Evidently we weren’t the only ones looking for the toilet and three other ladies followed us. Now I know why the streets were empty. The door led into a large dark room with 150+ computers and 300+ young people sitting around and playing games, surfing the net or chatting. The ladies led us to the toilets – traditional hole in the floor toilets that stank, but Daji managed to relieve himself without any accident. 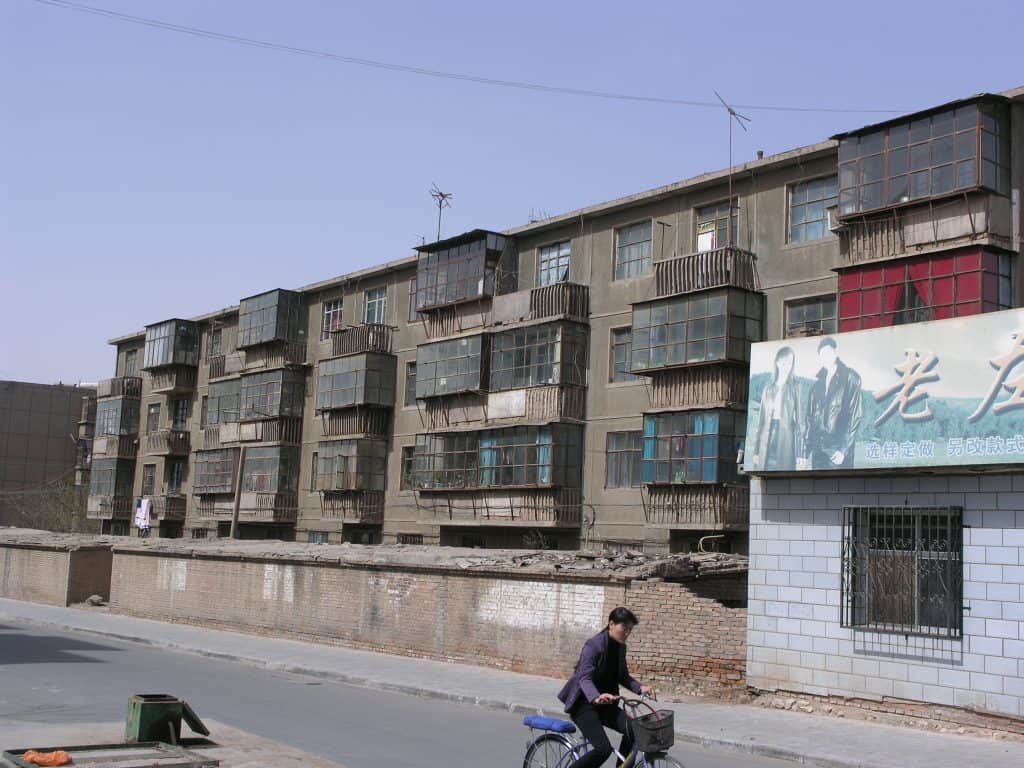 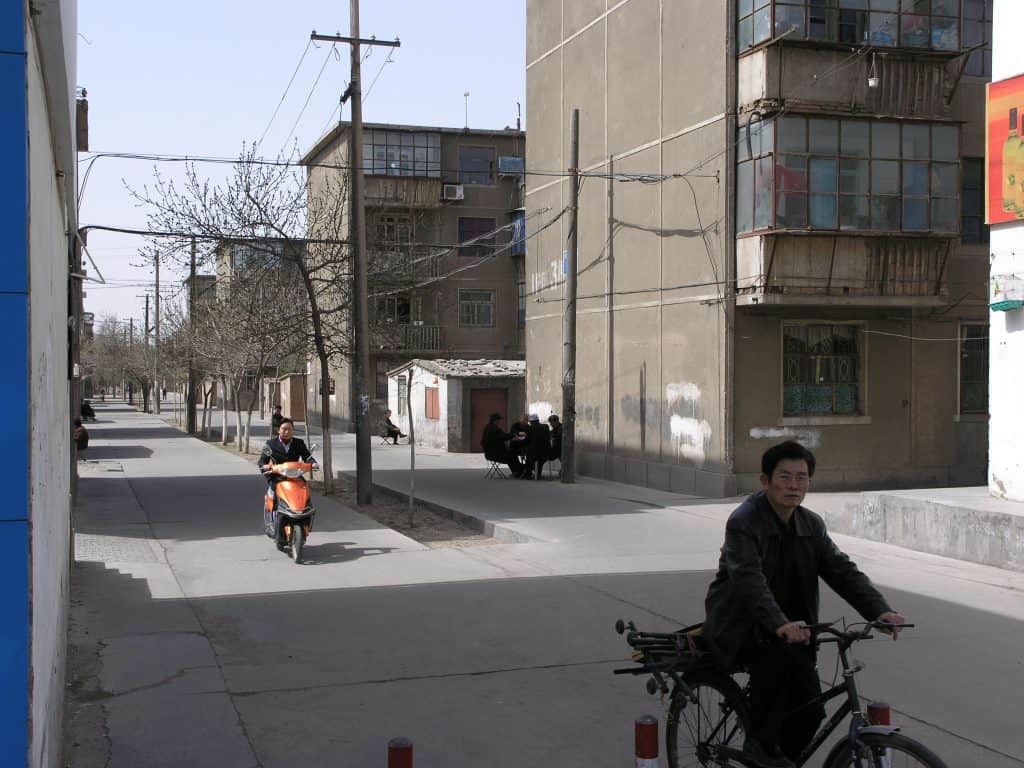 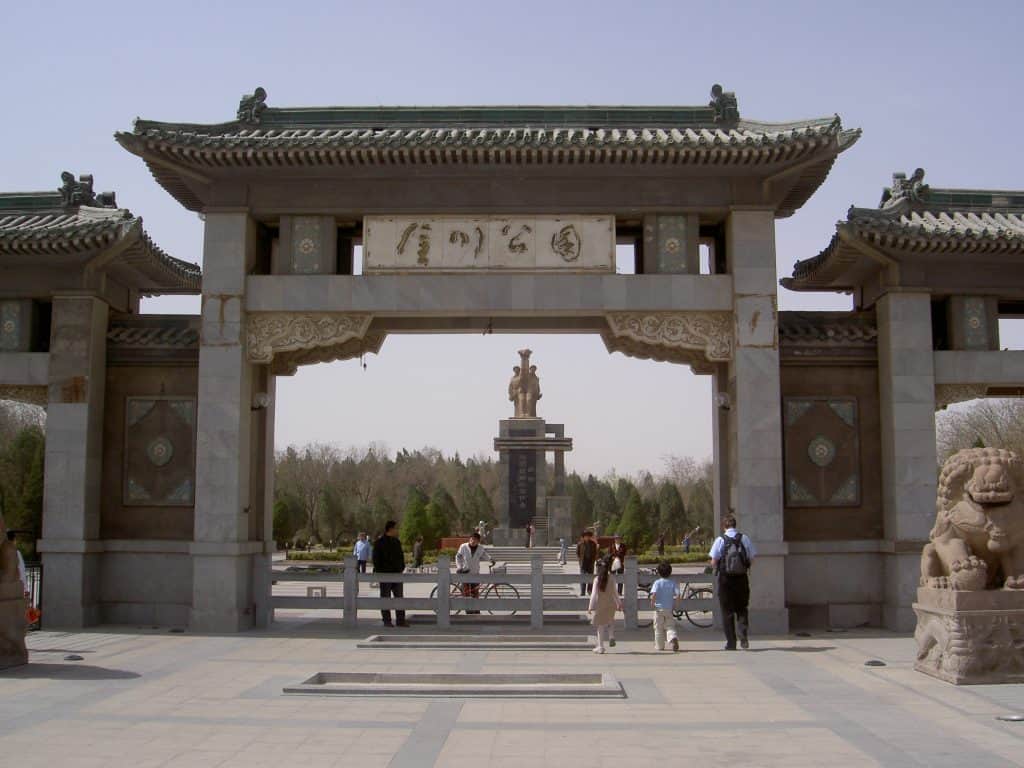 We walked back down the walking street and to the entrance to what we believe is Long Quan park. We decided not to go in as we had another whole day in Jinchang (or so we believed). We walked along a street heading east. There was more traffic now. An elderly, well-dressed man came up to us, patted Yanmei on the head and made a thumbs up sign to us and walked on. We were surprised, most people notice Daji, and even though Daji and Yanmei were next to each other when it happened, there was no doubt it was Yanmei he wanted to pat on the head. It also dawned upon us that whilst there weren’t many people on the streets, one would never know whether we walked past Yanmei’s mother or father! A peculiar thought. 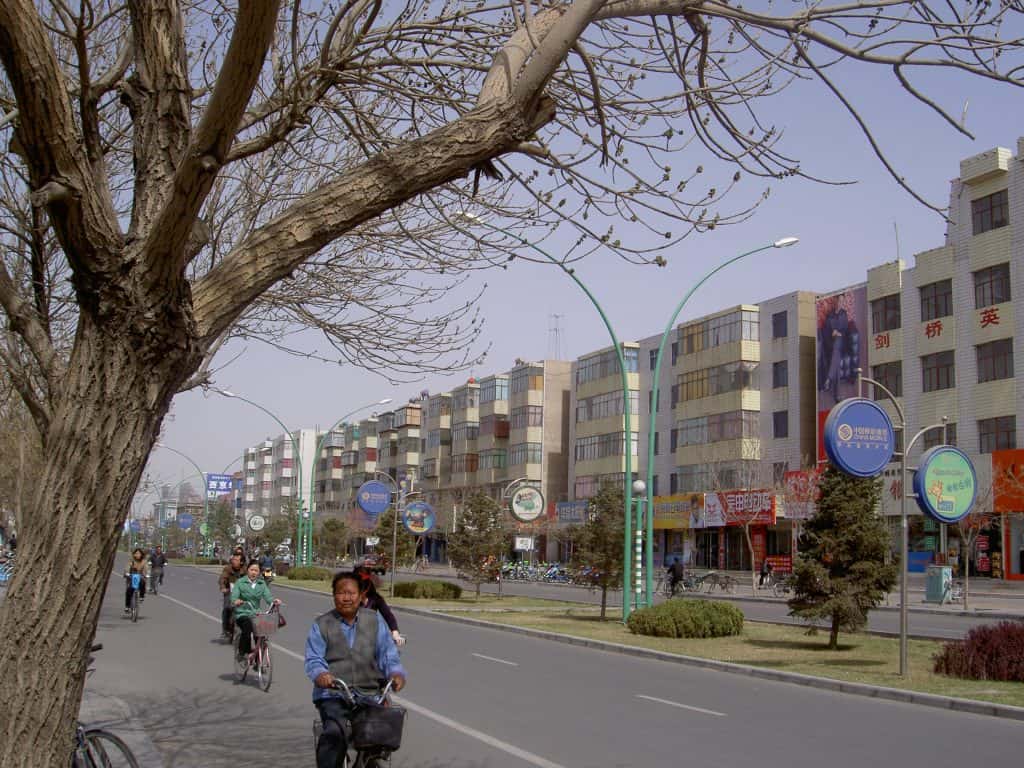 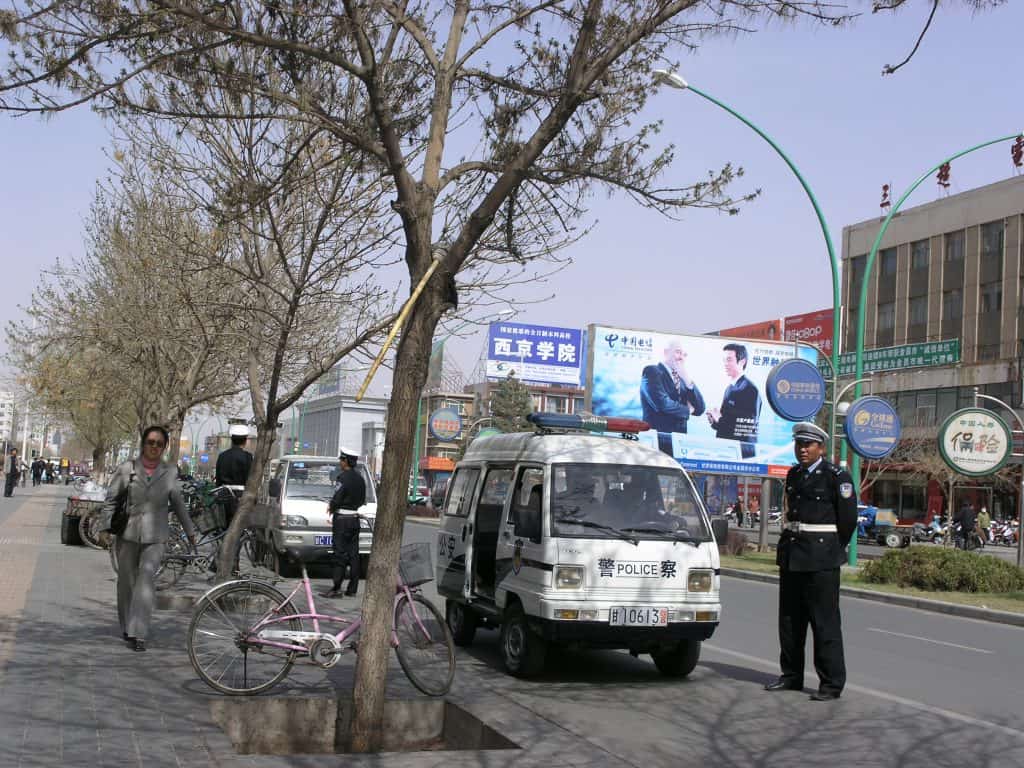 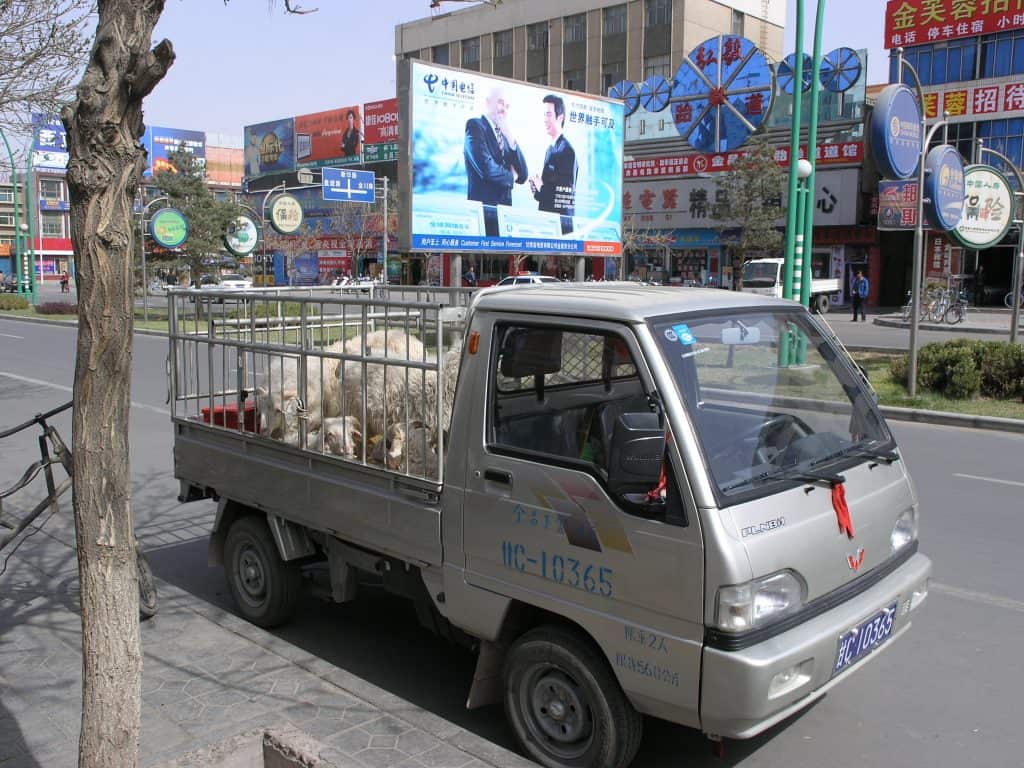 Officially Jinchang has a population of 500.000 where 250.000 live within the city (where the others live we have no idea). That is a city with nine times the population of the town we live in on the outskirts of Copenhagen. However, I would very much doubt that you would see so few people on streets at any time here our home town. All the streets were wide, mostly with three lanes in each direction and with grass separating the carriageways. The pavements were wide, this was an infrastructure any city with 2m people would have been proud of. But for the first and only time in China – the roads and pavements were largely empty, and many of the shops had more assistants than customers.

We continued east along the road passing some housing blocks and crossed the main intersection that going north led to the roundabout we passed the night before and going south towards the industrial area. Going east we passed a parked tank, probably not in use – the area was industrial with small light industry. We turned north at the intersection and passed a bank and then west again back towards our hotel, passing Jinchang’s own TV station.

We ended up in the exercise park in the People’s Cultural Square and watched two or three elderly kite flyers – certainly experts. The square had a small lake, which was full of mud, but I’m sure will be cleaned up as summer approaches. Daji and Yanmei spent a long time playing in the exercise park and watching the kites – they seemed to have unlimited energy whilst in China. 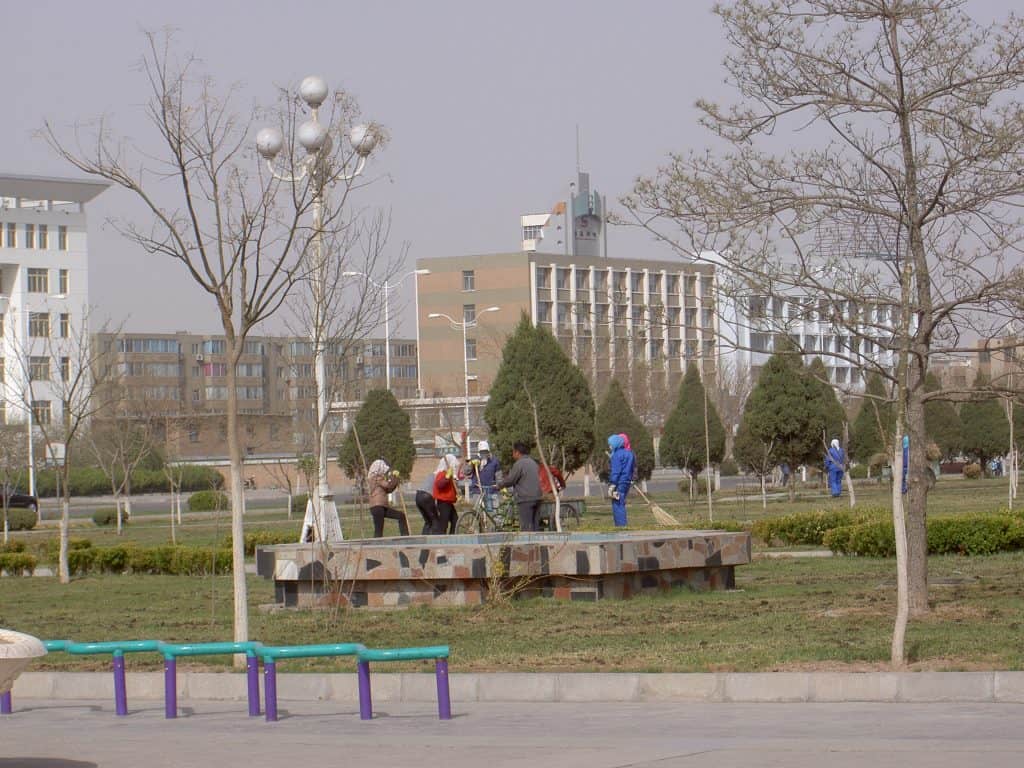 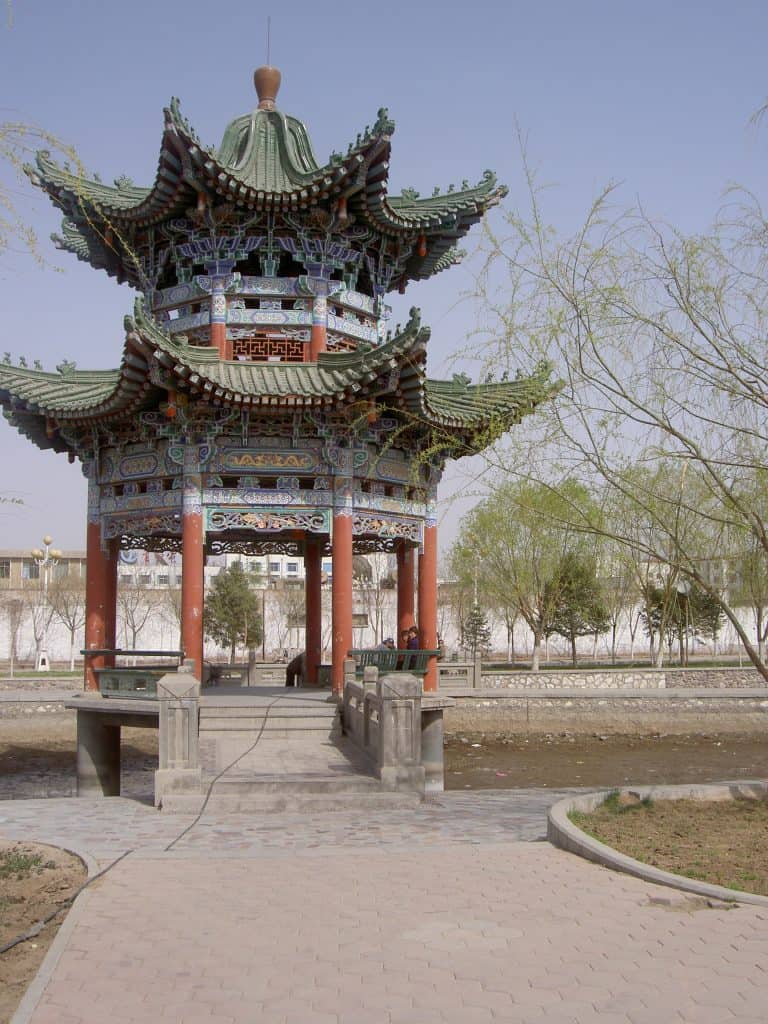 We walked back to the supermarkets next to the roundabout and bought ice cream and some bread and fruit. We weren’t particularly hungry but needed something before returning for the “gala evening” at the SWI. 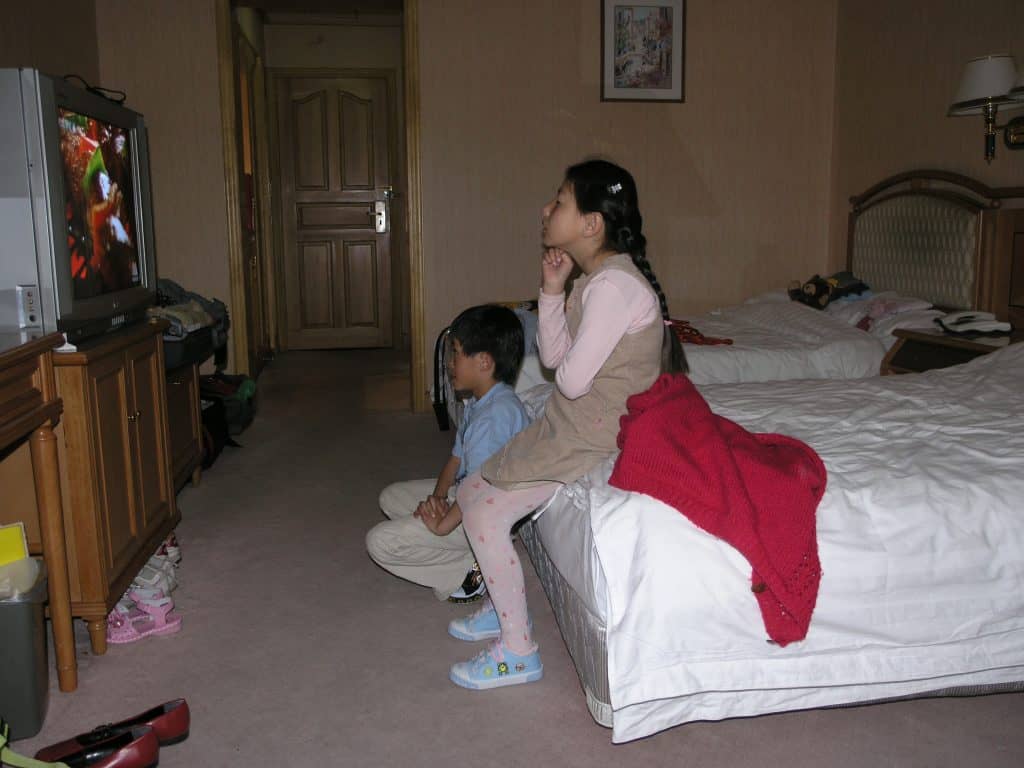 When we visited Jinchang I added the places we visited to the map below. 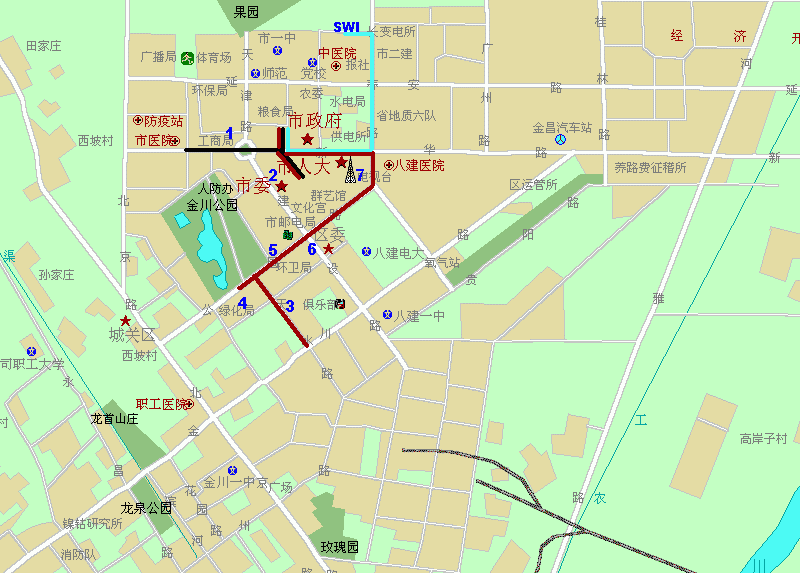